[Asia's Next Page] The Quad Moves on Critical Technologies 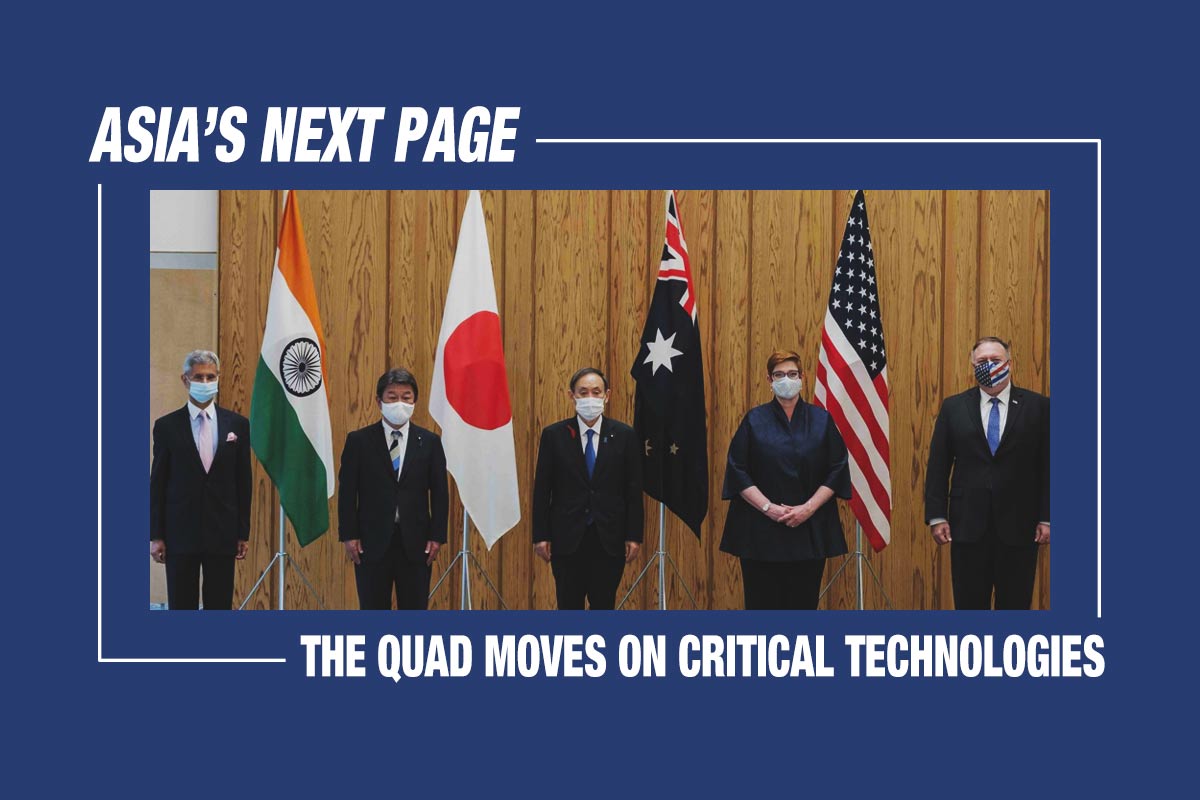 In a world increasingly marred by the United States-China great power competition, the recently concluded first-ever Quad Leadership Summit (QLS) became an important next step for the progress of the U.S.-Japan-India-Australia Quadrilateral Security Dialogue (Quad) in the Indo-Pacific.

It is certainly a great step towards the institutionalization of the Quad process. Driven by a shared goal of fostering a “free, open, inclusive, and resilient Indo-Pacific”, the QLS has emerged as a political statement among the four democracies to collaborate to balance China’s emerging prowess in critical sectors. With the establishment of three working groups for cooperation with regards to climate change, vaccine distribution and emerging technologies, the QLS launched concrete action and extended its cooperation in broader domains.

Technology is perhaps one of the foremost areas where competition between the Quad states and China is inescapable. Thus, the QCET Working Group is a landmark move that aims to coordinate Japan, the U.S., India and Australia’s technological innovation capabilities and global tech governance efforts.

To this effect, how can the Quad emerge as a major player in this sector? Given Beijing’s decisive progress in the sector, how can the Quad gain an edge vis-à-vis China while shaping a sustainable, transparent and responsible future for emerging technologies?

Technology and the Supply Chain Caravan

Post participation in the QLS, all states released a joint statement titled ‘The Spirit of the Quad’ – marking the first such move since the grouping’s revival in 2017. The statement and the very formation of the Working Groups enunciate the ‘spirit’ of the Quad as a premier security consortium, poised to shape the future of the Indo-Pacific geopolitical landscape.

Emerging technologies such as artificial intelligence (AI), cloud computing, quantum, robotics and blockchain, hold the potential to not only transform society but also add a massive $15 trillion USD to the global economy by 2030. This is seen as a critical facet of the global politics shaping the trajectory of the future global economy. Hence, the QCET, alongside the other groups, indicates that the Quad is prepared to engage in a more future-oriented and tangible grouping that is formalized and has a substantial impact. It goes beyond being an “exclusive clique” – as China has alleged – to a group of like-minded partners with growing political synergy looking to shape the post-pandemic international order. In this aspect, the QCET Working Group provides major areas of synergy for the Quad in the technological sector.

Practically, the QCET Working Group can be critical in building global technological supply chains so as to reduce reliance on China. The COVID-19 pandemic has highlighted the adverse impact of an over-dependence on Chinese manufacturing and value chain networks. This has resulted in an imperative to look inwards for countries around the world as they seek to diversify supply chains while focusing on domestic manufacturing. These states’ efforts are realized through the creation of ventures to restructure global supply chains away from China –such as the Supply Chain Resilience Initiative (SCRI) by India-Japan-Australia –along with Biden’s signing of an executive order to review semiconductor supply chains while the U.S. Congress looks to allocate additional funding for domestic chip research.

Beijing, too, via its dual-circulation strategy, is looking to create a “new development pattern” that allows domestic and foreign markets to support each other by facilitating national economic circulation. By implementing a strategy like this, Beijing’s focus is on protecting and controlling its geo-economic interests against what it views as targeted attacks against its growth.

Moreover, China has viewed the QLS as a means for the U.S. to further the ban of Huawei by using the tech giant as a “bargaining chip”–especially as India, the U.S., Australia and Japan have each individually progressed further in their steps to prohibit the conglomerate’s functioning within their borders.

Hence, the “diversification of equipment suppliers” is a key focus of the QCET Working Group.

Notably, the Quad is reportedly set to create a new “rare-earth procurement chain” to supply metals for building items ranging from electronic vehicles to smartphones. Such a chain will now, ideally, fall under the governance of the QCET Working Group. It is important to note here that China has the largest rare-earth reserve in the world; as a result, global technology supply chains have both depended on and been dominated by China. Hence, a diversification of rare-earth procurement is a direct move by Quad to break away from Beijing.

Additionally, cooperation between the QCET and SCRI can be propounded with such collaboration, potentially paving the way for U.S. inclusion into the initiative. Moreover, the ‘Quad Plus’ framework –comprising South Korea, Israel, New Zealand, Brazil and Vietnam –has immense scope for upgradation under the leadership of the QLS. Though such a framework is not formalized, and limited in its mandate at present to address the current global pandemic, dialogue with some of these countries will certainly open a new gateway of cooperation in the Indo-Pacific and beyond. Another potential partner in building “dialogues on critical technology supply chains” is Taiwan.

Tying Up with Taiwan

Being a major hub of high-technology value chain manufacturing, Taipei will be a valuable addition to the creation of a QCET Working Group and SCRI driven alternative supply chain. The global importance of Taiwan’s semiconductor industry, with firms like the Taiwan Semiconductor Manufacturing Co Ltd (TSMC), can prove to be a vital source of sustainable and resilient supply chain connectivity.

Amid changing global supply chains and intensifying U.S.-China competition, the semiconductor industry is already looking to diversify. In 2020, TSMC, which already has strong links with the U.S. tech industry (as an Apple supplier), entered into a partnership with the U.S. with a $12 billion USD investment. Furthermore, with semiconductors underlying all critical technologies and being one of the most high-value supply chains, it is not possible for a single country to become completely self-reliant in the same. Amid reducing dependence on China, Taiwan can fill an important gap for Quad nations in supplying critical high-end tech materials. The QCET’s collaboration with Taiwan can initiate a dialogue on high tech as the first step to a longer partnership.

Most importantly, in a bid to “develop a statement of principles”, the QCET Working Group promises cooperation among both “national technology standards bodies” as well as a “broad range of partners”. In other words, it brings together Quad states in their efforts to shape global governance norms and international laws in the field of emerging technologies.

Such niche technology is only just developing, yet it holds the potential to shape the future of the world. Hence, the way in which these techs are governed will be critical. States must formulate laws and policies that dictate their technological and legal boundaries. Will tech standards conform to liberal values of transparency, privacy and democratization? Or, will they be shaped under a Chinese envisioned socialist system with Chinese characteristics?

So far, China has had a distinct advantage in this realm. For instance, China has so far led efforts to shape international norms of industrial standards for Internet of Things (IoT) — defined as “the interconnection of physical and virtual things via information and communication technologies” that has applications in sectors ranging from domestic, medical to military.

However, Beijing’s own “Digital Silk Road” is now meant to advance its own interest. In fact, today, China is well-positioned to emerge as a leader in the field and compete with states like the U.S. and Japan. Its advantage gives Beijing the leverage to enhance its access to data of foreign consumers while gaining market share.

Essentially, the CCP is strategically building its capabilities in emerging tech – such as through Chinese companies like SenseTime, the world’s most valuable AI start-up. It is maneuvering the IoT into a strategic tool to project China’s global power, transform it into an international standard-setter building an IoT with Chinese characteristics, and build a global Beijing-controlled network of information.

In other words, Beijing wants to achieve “commanding heights” of a “new scientific and technological revolution” to gain a “winner-take-all” advantage.

In response to this, the QCET Working Group can capitalize on the advantages of each of the Quad members – India’s data generation strength, Japan’s research and development (R&D) focus, Australia’s successful public-private partnership (PPP) model and U.S.’ massive supercomputing capabilities – to pose a challenge to China’s dominance and gain a competitive edge.

Each of the Quad nations has its own Science and Technology (S&T) strengths and development plans. India is the third-most attractive technology investment destination and among the top states for scientific research. Programs like Digital India are making strides in creating a digitally empowered society. Japan has experienced remarkable growth in its S&T capabilities; it is on the verge of accomplishing its 5th Five-Year S&T Basic Plan (FY2016-FY2021), which focuses on emerging tech and R&D, and deliberating the priorities for its 6th Plan.

Australia too has adopted a comprehensive 2030 ‘Prosperity through Innovation’ plan with a key focus on IoT, virtual reality, automation, smart cities and e-health. For the U.S., S&T has long been one of the “cornerstones” of its economy, and in 2021, S&T has become a key aspect of the U.S.’ homeland security strategic plan.

The QCET Working Group can build synergy in these national S&T plans and further encourage bilateral and multilateral collaborations through memorandums of understanding. One facet of such cooperation could be the promotion of a digital economy in the Indo-Pacific.

Initiatives like Japan’s Expanded Partnership for Quality Infrastructure (EPQI) and U.S.-Japan-Australia led Blue Dot Network (BDN) could be added platforms for this objective. With infrastructure connectivity being a key Asian security derivative amidst China’s Belt and Road Initiative (BRI), taking charge in promoting connectivity technologies (like IoT) can greatly shape the future of digital connectivity, limiting the rural-urban and North-South divide.

Simultaneously, it can also help Quad states smooth over their differences, such as in data privacy norms. Japan is a strong proponent of the free flow of cross-border data (with government intervention for data privacy). It launched the Osaka Track at the 2019 G20 Summit to put in place a framework to this effect. India, however, while recognizing the importance of international data transfer for cross-border business development, has reiterated that such discussions must be under the World Trade Organization’s framework, considering data’s emerging role as a “new form of wealth”. This issue has been a key point of friction between the two otherwise strong partners; QCET can be a platform for overcoming such points of discord.

Therefore, the QCET Working Group marks a critical advance in the Quad’s evolution. With substantive cooperation between these states, the Quad can witness true progress in the high-tech domain. Ultimately, the aim must be to create a digital Indo-Pacific with strong institutions and a digital architecture that is free, transparent, inclusive and democratic, therefore being reflective of liberal norms.

Dr. Jagannath Panda is a Research Fellow and Centre Coordinator for East Asia at the Manohar Parrikar Institute for Defence Studies and Analyses, New Delhi. Dr. Panda is Series Editor for “Routledge Studies on Think Asia”.