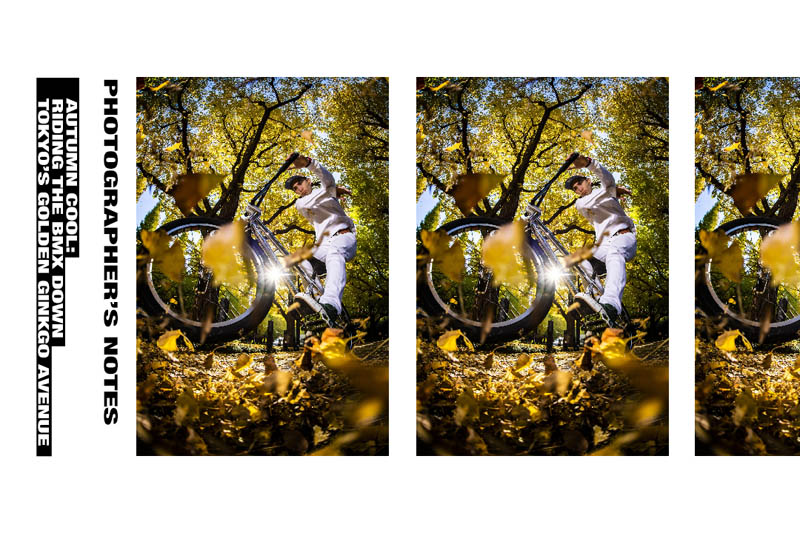 One of the best parts of living in Japan is being able to enjoy the seasons as they change in all their wonderful beauty: the sakura (cherry trees) in the spring, the blue skies and hot days of the summer, the kouyo (changing colors of the leaves) in the fall, and exploring snow-covered shrines in the winter.

Currently we are at the tail end of the fall in Japan, and this means we can enjoy the yellows and reds of the changing leaves found all over the country.

One of these famous ginkgo-lined streets is known as the Meiji Jingu Gaien Ginkgo Avenue (神宮外苑いちょう並木). I thought this would be a great place to get a cool BMX image that shows the beauty of Tokyo’s yellow ginkgo trees.

Knowing this was a famous and popular place to take photos, I had my friend and internationally-known flatland BMX rider, Tsutomu Kitayama, join me bright and early at 7:30 A.M. And guess what: there were already several people there taking pictures of the trees, nooo!

My vision of the photo was to have Tsutomu ride his bike and do some tricks while I would shoot a wider shot that would show him riding under the many ginko trees along the street. Unfortunately, I don’t really like random people in the background of my images, and there were so many people there that the photo I envisioned became impossible. I had to come up with a different idea really quickly.

So, what do I do when I can’t shoot far away with a long lens? Shoot very close with a very wide lens — in this case, my Nikon 16mm/2.8 fisheye.

When used properly, a fisheye lens is great fun and can help you get some really unique images. Also, as it is so overly wide, anyone that might be a little in your background becomes so small that you don’t even really notice them, and as you shoot close to your subject you don’t need all that much space. It really helps in busy tourist-filled areas like this one.

So now that my camera was set up, I decided to add some fill flash of Tsutomu from the left and right, as he was quite shadowed and backlit, and I wanted to make him pop out against the yellow leaves in the trees above us. Thankfully, Tsutomu wore white clothes, so this helped him pop out even more.

And then we were shooting! As we worked, we both came up with various ideas for tricks to try and got some cool shots, but this shot here is by far my favorite.

I really wanted to have falling/flying leaves in the picture, but tossing them with my free hand was not working. So, Tsutomu decided to do a trick called a bar spin, and hit a pile of leaves with his front tire to send them flying into the camera lens. This was a hit-and-miss endeavor, to say the least. But sometimes luck is a big part of getting “the shot.” After 10 to 15 tries, we got lucky with the shot shown here. Even the sun was in just the right place!

Although it was an early morning, I really enjoyed our little session and am pleased with how the image came out in the end.

If there is one recommendation I can make, it would be to get out and enjoy Tokyo’s golden ginkgo avenues before winter comes and takes all the wonderful yellow leaves away.