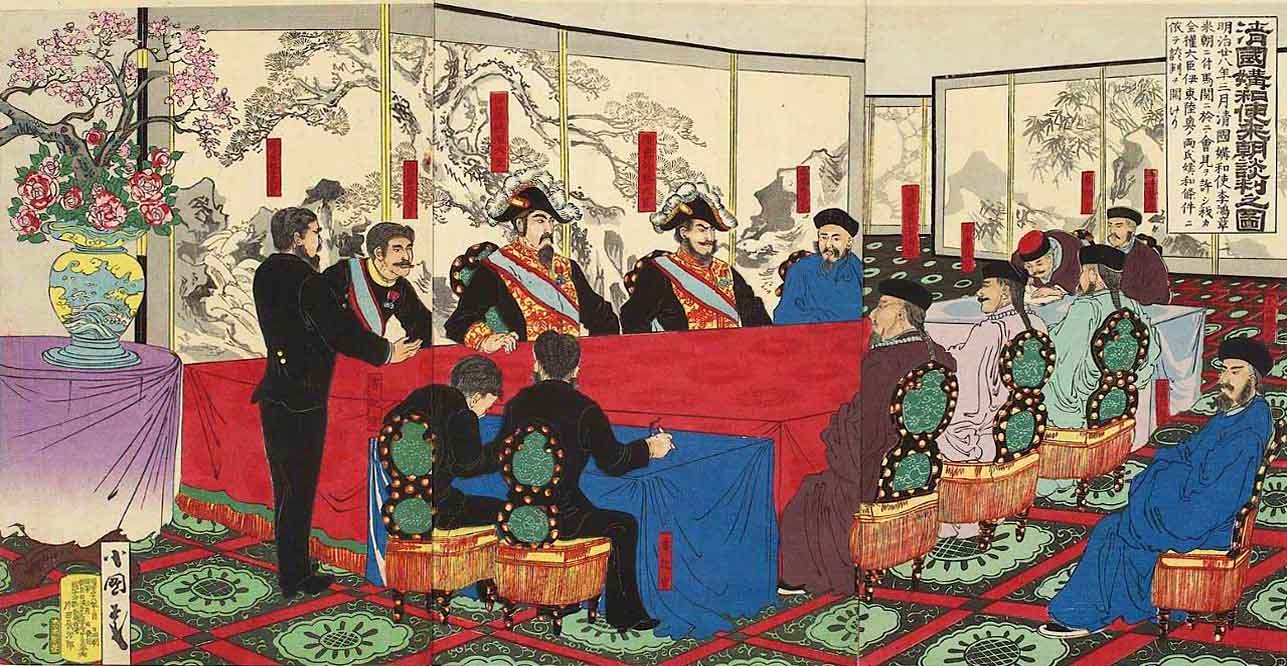 A Japanese illustration depicting the negotiations of the Treaty of Shimonoseki in April 1895.

Middle Kingdom and Empire of the Rising Sun: Sino-Japanese Relations, Past and Present

On July 5, the Japan Institute for National Fundamentals will award the 2017 Japan Study Award to University of Miami (USA) Prof. June Dreyer and the Japan Study Special Award to former New York Times Tokyo bureau chief Henry Scott-Stokes. Prof. Dreyer will give a special lecture on her book, Middle Kingdom and Empire of the Rising Sun: Sino-Japanese Relations, Past and Present (Oxford University Press). Prof. Dreyer does not subscribe to the postwar view, pushed aggressively by China, of “Japan as villain,” and instead takes a balanced, longue duree view of the entirety of Sino-Japanese relations spanning some fourteen centuries. Mr. Scott-Stokes, for his part, caused a sensation among European and American journalists with his English-language book, Fallacies in the Allied Nations’ Historical Perception as Observed by a British Journalist (Hamilton Books).

A review of Prof. Dreyer’s award-winning book is below.

The Asia-Pacific region is arguably the most dangerous place in the world today. Repeated missile launches and nuclear tests by North Korea make the northwest Asia-Pacific a flashpoint for a potentially catastrophic war.

But the North Korean crises, although contributing greatly to the regional tension, often distract from the real rivalry in East Asia: that between China and Japan.

Specialists in East Asian politics and security are, of course, attuned to the broader issue of the Sino-Japanese relationship. North Korea’s provocations make the headlines, but the deeper story—covered in the back pages more often than not—is that of a rising China and a wary Japan.

Even experts are apt to frame these uneasy relations in terms of the present and the future, gauging current political, economic, military, and “soft power” developments, and trying to project trends forward into the months and years ahead.

However, behind today’s mutual distrust and cautious attempts at engagement lie two millennia of on-again-off-again rivalry. Greece and Persia, Naples and Venice, England and France: these antagonisms have all come and gone, but the jockeying for position between Japan and China has been going on for longer than most civilizations have been in existence.

June Teufel Dreyer’s important new book, Middle Kingdom and Empire of the Rising Sun: Sino-Japanese Relations, Past and Present, tells the history of that long-running tension in rich, readable detail.

Today’s ship collisions and fighter plane flybys over contested islets and manmade island runways are simply manifestations of a much, much longer history of Japan and China “rubbing one another smooth like stones,” as Dreyer deploys an old Chinese saying to describe. In other words, defense spending and economic competition did not arise out of nowhere. The dangerous situation in East Asia has a long and complicated history.

Dreyer’s thesis is as simple as it is powerful: “these issues (i.e., disagreements over historical interpretation) are merely symptoms of an underlying problem that stretches back to the beginning of relations between the two states: the unwillingness of either China or Japan to accept the other as an equal, and the refusal of either to accept a position of inferiority to the other.”

Dreyer’s story begins with the birth of what we know as “China” in the Zhou Dynasty, around 1000 BC. Some 800 years later, Japan’s civilization—by then already 20,000 years old—received bronze-making techniques from the continent. Thus began the long process of cultural exchange, writing, religion, philosophy, and statecraft with Japan, and the return of cultural and technological know-how later in the relationship.

China expected other peoples to be overawed by the splendor of Chinese achievements; to their great consternation, Japan refused to pay homage to the Chinese rulers. Despite threats and actual invasion attempts, Japan was not cowed into submission.

This all changed in the mid 1800s, when China’s century of humiliation began with the Opium War. Some 50 years later, Japan had defeated China in battle, stunning the world and stinging the Chinese leadership into reform. In 1949, Mao Zedong effectively ended the long period of civil war in China by unifying the Chinese mainland.

Now, nearly 70 years later, many in Japan wonder whether the People’s Republic of China will be content with recovering almost all of its former territory, and then some (Tibet, Xinjiang, and Inner Mongolia don’t seem to make up for the absence of Taiwan), or whether Beijing wants to be hegemon of East Asia, too. Does China want restoration of its former suzerainty over East Asia, or does it want revenge on those who humiliated it, as well?

As Dreyer deftly shows, this uneasiness is the theme of the long story of China and Japan. After giving a very helpful overview of the pre-Opium War background, Dreyer takes her readers on a blow-by-blow tour of the most important relationship in East Asia. In a constant reanimation of past events endued with present significance, the tension between Japan and China is one of diachronic and kaleidoscopic interaction with the past. Old things are made new again as they become metaphors for current events.

For example, Dreyer shows how, in 1985, after Japanese Prime Minister Yasuhiro Nakasone became the first postwar Japanese leader to visit the Yasukuni Shrine, Chinese students protested as much against the PRC officials who refused to condemn Nakasone’s actions as against Japan itself.

The protestors charged Japan with trying to recreate the Greater East Asia Co-Prosperity Sphere, but they carefully adopted the rhetoric of the 1935 anti-Japan movement in China because those had also been directed against both Japan and the feckless Chinese leadership. In “protesting against bureaucratism and unhealthy tendencies” and “opposing those who seek wealth and power by betraying their country,” the protestors, clothed in the righteous mantle of former patriotic movements, were actually denouncing their own government.

This constant presence of the past in current events means that those who seek to understand Sino-Japanese relations are blind without an understanding of their millennia of contentious history.

Dreyer has seen the picture in its full and deep complexity, and she shares her insights with her readers in what will surely become the go-to book on the subject, period. This is a tour-de-force. Both students and specialists will want to keep Middle Kingdom and Empire of the Rising Sun within reach, for the key to understanding Sino-Japanese relations is in its pages.

I suspect that there will be a second edition of the book soon. There are more typographical errors in an Oxford University Press book than one might expect. For example, NATO is the North Atlantic (not “American”) Treaty Organization; it is “navel” (not “naval”) gazers; and pages of text from the first third of the book are reprinted in barely reprised form in the last third. This book, which the publishers must have known would be a classic addition to the literature on Sino-Japanese relations, deserved much more careful editorial attention before it was released.

But these are quibbles, and such things are easily corrected.

Overall, Dreyer, a professor of political science at the University of Miami and the author of the long-selling China’s Political System: Modernization and Tradition, among many other works, has given us the masterpiece of her distinguished career as observer and scholar of East Asia. Middle Kingdom and Empire of the Rising Sun deserves every award and accolade it is sure to win, but none more so than the decades of use it will get as the authoritative history of the most complicated relationship in all of the Asia-Pacific.