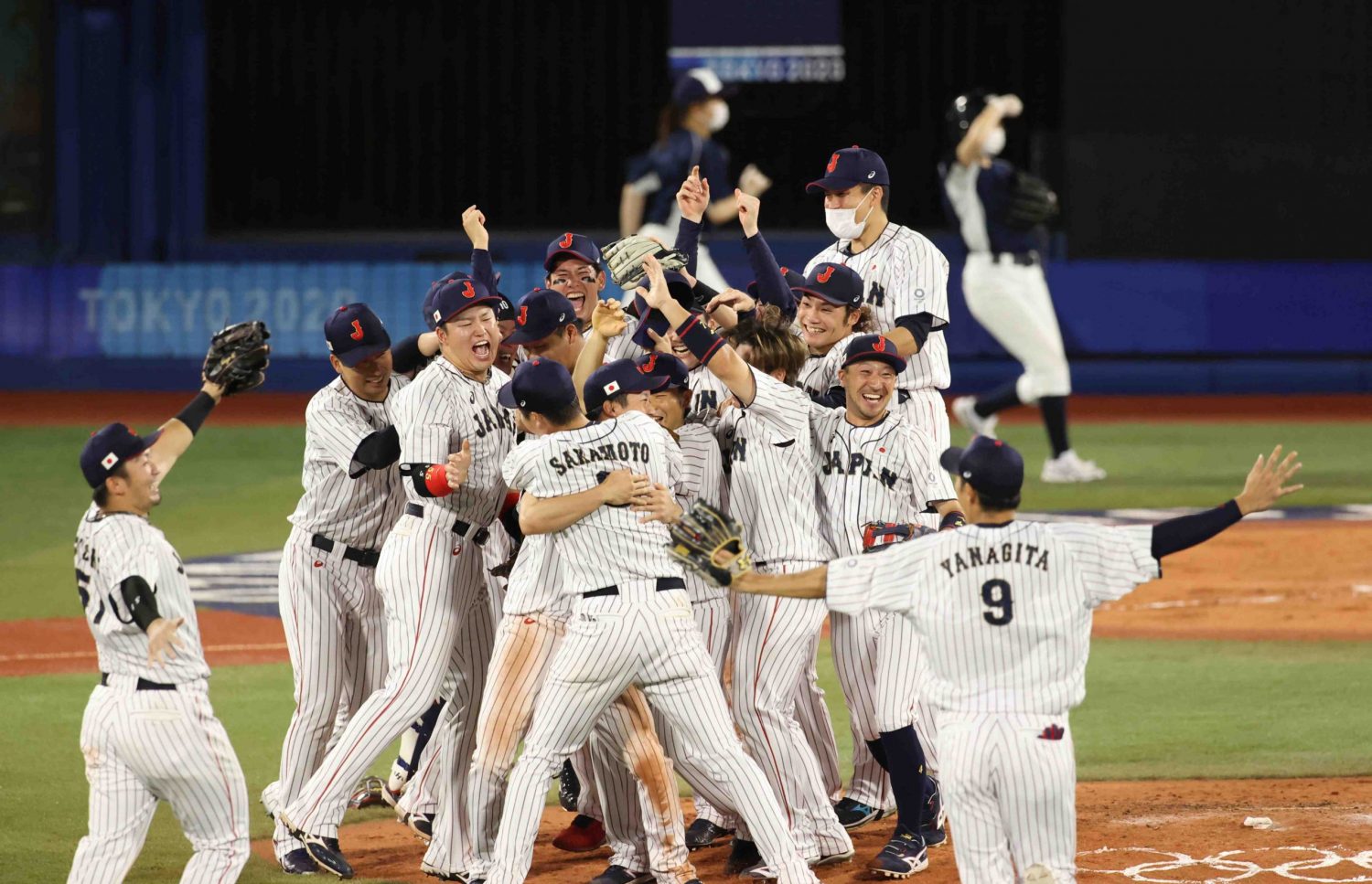 Japan's players congratulate one another after their 2-0 victory over the United States in the Olympic baseball tournament's gold-medal game at Yokohama Stadium on August 7.

The long wait is finally over.

Japan relied on solid pitching and just enough timely hitting on Saturday, August 7 to defeat the United States 2-0 and capture its first ever Olympic gold medal in baseball.

Munetaka Murakami gave Japan a 1-0 lead in the third inning with a solo homer to center at Yokohama Stadium off U.S. starter Nick Martinez.

The score remained that way until the bottom of the eighth when Tetsuto Yamada led off with a single to right and advanced to second on a sacrifice bunt by Hayato Sakamoto.

Masataka Yoshida then singled to center and on the ensuing throw from the U.S. pitcher, who was backing up the play, Yamada slid under the tag on a close play at the plate.

“Everybody worked really hard,” Japan manager Atsunori Inaba said. “The players wanted the gold and we were able to play well in every game. We got a little momentum from Murakami’s homer and our pitchers performed beyond expectations.”

Japan starter Masato Morishita picked up the win after striking out five and giving up three hits over five scoreless innings.

Koudai Senga, Hiromi Itoh and Suguru Iwazaki each pitched a scoreless inning until Ryoji Kuribayashi retired the side in the ninth for the save.

U.S. Comes Up Short in Ninth

There was a bit of a scare in the ninth when Nick Allen singled to right with two outs, but he was forced out at second on a grounder by Jack Lopez.

“We knew America had a lot of good batters and we talked about that before the game,” Japan catcher Takuya Kai said. “Our plan was to be aggressive with our pitches and we were able to do that.”

Samurai Japan celebrated the gold medal and a perfect 5-0 record with a traditional doage in which the players repeatedly toss their manager in the air on the pitcher’s mound.

“Even though they were unable to come out to the park, I want to thank all our fans watching on TV, we felt their energy,” Sakamoto said.

Baseball became an official Olympic sport at the Barcelona Games in 1992. Japan won the bronze medal that year.

Japan won silver four years later in Atlanta and bronze in Athens in 2004.

With many of their top players from NPB, the team failed to win a medal in Beijing in 2008, a bitter disappointment for a team that had gold medal aspirations.

Baseball was dropped from the Olympic program for the 2012 London Games but was reinstated for Tokyo 2020 in part due to the overwhelming popularity of the sport here. Baseball will not be on the program for the 2024 Games in Paris.

NPB halted its schedule so that Japan’s top players would be available for the tournament and it was a move that clearly paid off.

The U.S. team was made up mostly of minor leaguers and several players from NPB including starter Martinez of the Fukuoka Softbank Hawks and Tyler Austin of the Yokohama BayStars. Players from the 40-man rosters of MLB teams were not permitted to take part.

Earlier, Juan Francisco drove in three runs to lead the Dominican Republic to a 10-6 win over 2008 gold medalist South Korea in the bronze-medal game.

Cristopher Mercedes, who pitches for the Yomiuri Giants, picked up the win after pitching 3⅓ scoreless innings in relief.