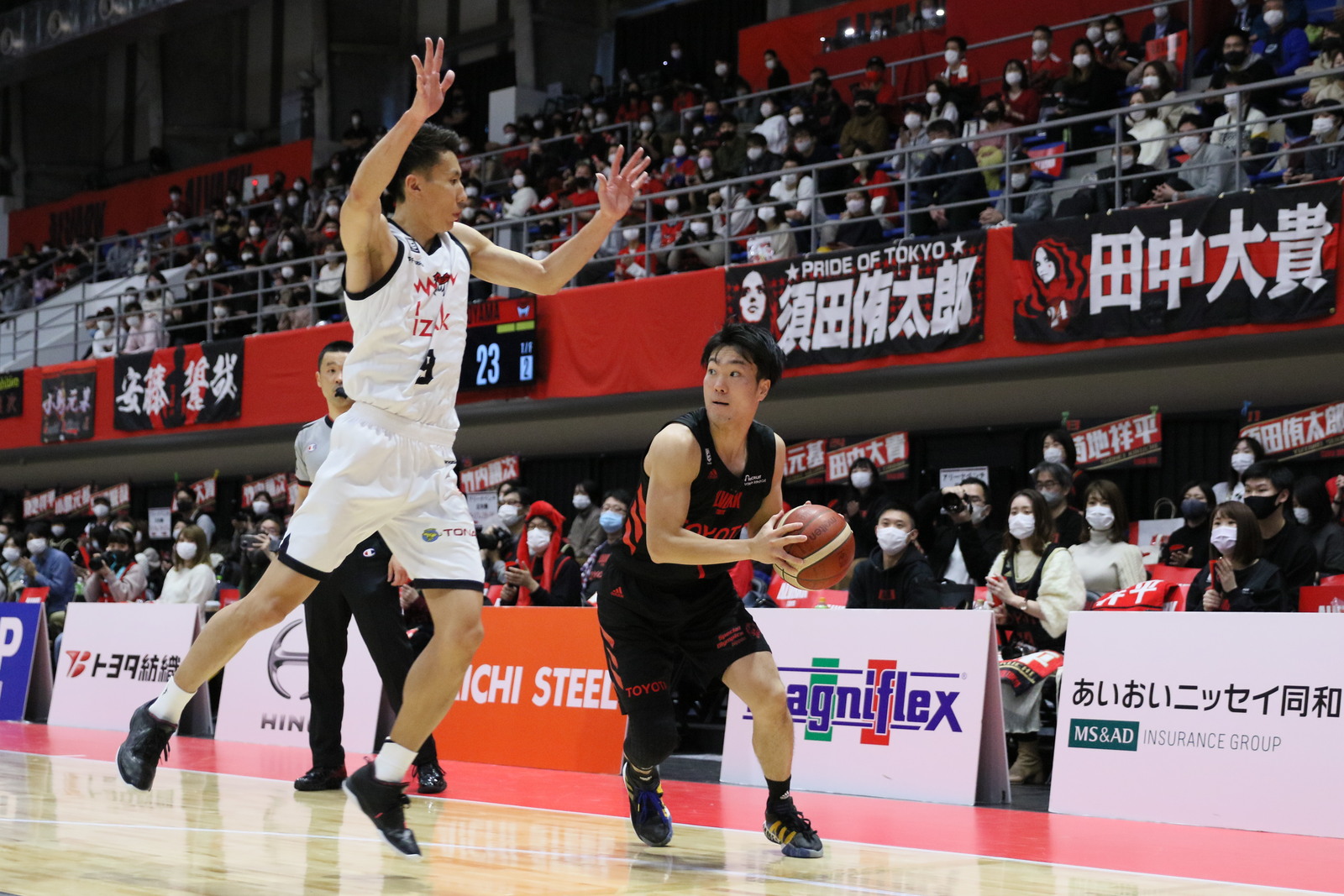 Alvark guard Genki Kojima runs the offense on January 31 against the Grouses in Tachikawa. Credit: B. League

The Alvark Tokyo endured a rough stretch in December, dropping six of eight games. Since then, they have embarked on a stellar turnaround.

With eight wins in its past 10 games, Tokyo has reasserted itself in the B. League playoff picture. (This includes a 74-73 Emperor's Cup third-round win over the Sunrockers Shibuya on January 13. Tokyo clinched a spot in the All-Japan Basketball Championship semifinals on March 12 at Saitama Super Arena.)

The Alvark recorded a bounce-back 90-86 win over the Toyama Grouses on Sunday, January 31 to close out the month on a positive note at Arena Tachikawa Tachihi. The Grouses won the series opener, 97-86, on Saturday, January 30.

Road losses to the Utsunomiya Brex on December 19 and 20 marked "the peak of our low point," Alvark coach Luka Pavicevic said.

Days before Christmas, the Alvark had a 12-11 record, a far cry from the team's high standards.

After back-to-back B. League championships in 2017-18 and 2018-19, the Alvark were in the title hunt again last spring with a league-best 32-9 record before the COVID-19 pandemic forced the cancellation of the rest of the season in late March.

In addition, from the start of the 2018-19 campaign until the end of last season, the Alvark won 76 of 101 regular-season games.

Entering February, the Avark (19-13) sit in seventh place in the East Division standings and within striking distance of the playoffs. (Eight clubs in the 20-team league will advance to the postseason, with the top three teams in each division and two wild-card participants.)

Their turnaround began with a three-point win at home over the Nagoya Diamond Dolphins on December 26 and a 12-point triumph the next day.

Pavicevic and his staff, including lead assistant coach Kota Mizuno, worked tirelessly to get all of the players on the same page.

"It was a painful process," Pavicevic acknowledged while describing the team's turnaround, adding that there were "a lot of game breakdowns" during the team's biggest slump in years.

Developing the team's player rotation, tactics and chemistry took time to reach an acceptable level, according to Pavicevic.

Veteran American forwards Kevin Jones and Deshaun Thomas, made their season debuts at different times in the fall. This hindered the team's development at the outset of the season. Thomas played in his first game on November 8, a month after Jones' first game. And point guard Genki Kojima, who tore the meniscus in his right knee and was limited to three games last season, only appeared in three of the first 10 games this season. All three were essential to helping the Alvark become a more cohesive, consistent unit.

Case in point: Thomas scored 13 of his 15 points in the fourth quarter on Sunday. The Ohio State alum made 5 of 6 shots from the floor in the pivotal final period. Jones provided seven points and a pair of blocked shots.

Starting at the point against Toyama (21-11), Kojima had eight points and sank 2 of 3 3-point shots in nearly 18 minutes. Regular starting point guard Seiya Ando came off the bench and sparked the club with 10 points in 19 minutes.

Thomas, who was selected as the game MVP, said the Alvark offense made smart decisions.

"Our teammates knew who to attack and got me the ball in the right position," he said, citing good ball-handling decisions against Toyama. The Alvark chalked up 22 assists against 10 turnovers on Sunday.

Asked about the team's turnaround in its recent stretch of games, Thomas summed it up this way: "Team chemistry is slowly getting there."

"Seiya every day asks me where I like the ball [on offense] and what kind of shots I like to take," Thomas revealed.

This useful information helped the Alvark outplay the Grouses down the stretch.

In a fourth quarter that was wide open for several minutes, Thomas found his comfort zone with strong drives to the basket that led to high-percentage shots.

After a Joshua Smith putback gave the Grouses an 80-78 lead with 3:35 remaining, the Alvark dominated the rest of the way. In this pivotal stretch, Thomas converted a layup in traffic while being double-teamed to increase the lead to 87-82 with 35 seconds remaining.

"It was a great win for us," Thomas proclaimed.

Tanaka concurred. "After a loss, it was good to get a win," he said.

"What a difficult two games against Toyama," Pavicevic remarked. "It was important to physically confront their big men. You saw in our defense that we worked very hard and the guards helped and forced them to miss shots."

Toyama struggled from the outside, making just 6 of 22 3-point attempts.

Grouses floor leader Julian Mavunga, who leads the league in assists (7.0 per game), sat out the series due to "poor physical condition," the team announced in a news release.


For the Alvark, center Alex Kirk contributed 18 points, including nine in the fourth quarter and seven rebounds, while shooting guard Daiki Tanaka had a 15-point, seven-assist performance.

After hitting the metaphorical reset button on their season, Pavicevic likes the direction his team is heading in.

Now, the Alvark are "three to four wins behind our [new] starting point," said Pavicevic, referring to a target in pursuit of the playoffs. Tokyo will play its next three games at home. Up next: a two-game series against the Shinshu Brave Warriors (12-20) on Saturday, February 6 and Sunday, February 7, and a February 10 encounter with the Chiba Jets.

Seven East Division teams have winning records, with the Brex (25-7) and Chiba Jets (24-8) setting the pace at the top of the standings.

Meanwhile in the West Division, four teams are above .500. The SeaHorses Mikawa and Ryukyu Golden Kings are tied for the best record (23-9), followed by the Nagoya Diamond Dolphins (19-13), who have won three straight. The Osaka Evessa (17-15) also fit the description.