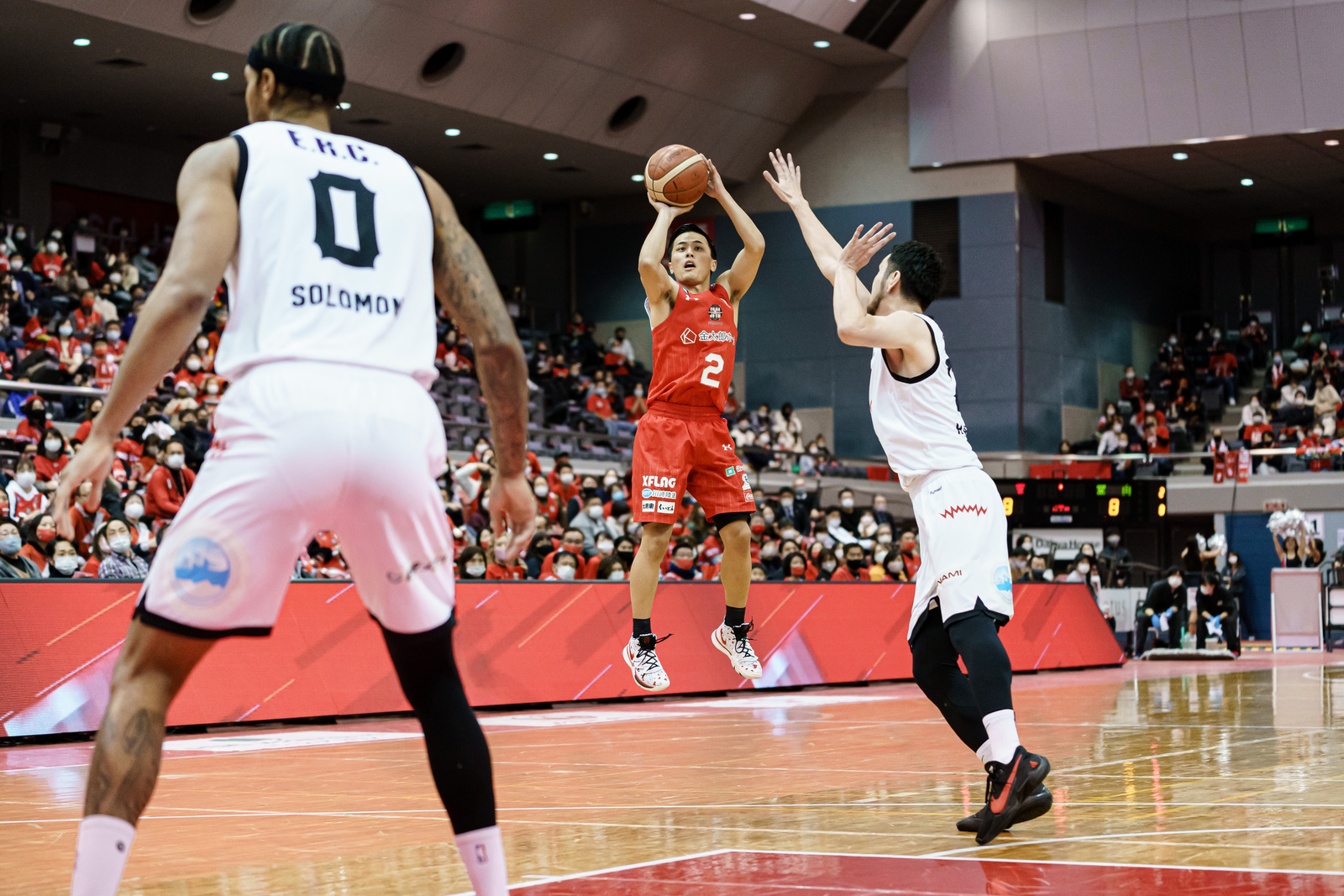 It was a game that showcased the dynamic skills of star guard Yuki Togashi and do-it-all forward Julian Mavungaーand the coaching acumen of Atsushi Ono and Honoo Hamaguchi.

Togashi drained a pair of free throws with 1 second remaining in double overtime, and Mavunga had a 3-point shot miss its target before the final buzzer as the Chiba Jets defeated the visiting Toyama Grouses in riveting fashion, 130-129 at Funabashi Arena on Sunday, December 20.

The Jets captain scored a team-high 40 points, including 9 of 12 from 3-point range, and converted 7 of 9 free-throw attempts in one of the best dramatic games in B. League history. The hoop circuit staged its first game in September 2016.

Toyama’s Mavunga also produced a stat line that grabbed your attention: 47 points (on 15-for-26 shooting), 12 rebounds and 14 assists.

Mavunga, who logged a game-high 42 minutes and 47 seconds of court time, succinctly summed up the disappointment he and his teammates felt after their determined effort fell short.

Togashi handed out four assists and made two steals. With the green light from Jets bench boss Ono to attack the basket or fire away any time from long range, Togashi is a high-energy catalyst with stellar shooting mechanics and speed.

What’s more, he personifies his motto (“Fear is not real”) every time he steps onto the court.

The determined 167-cm floor leader, who joined Chiba in 2015 after a season with Texas Legends of the NBA Development League (now known as the NBA League), nearly matched his career-high scoring total. Togashi dropped 42 points on the Alvark Tokyo on November 12, 2017, a game in which he canned 11 of 15 3-pointers.

But Toyama made adjustments at halftime and came out energized and focused to chip away at the lead in the third quarter.

Grouses players took veteran mentor Hamaguchi’s words of wisdom to heart and excelled in the pivotal period, erasing Chiba’s sizable advantage. By the end of the third, it was knotted up at 66-66.

In the fourth quarter, Mavunga sank a game-tying 3-pointer with 2 ticks left on the clock. That made it 99-99, forcing overtime.

Grouses forward Kosuke Hashimoto ignited his club in the fourth, burying 5 of 5 from beyond the 3-point arc for a 15-point effort in the quarter. Mavunga had 16 points in the period, while Togashi, a fan favorite in Japan pro hoops since he first suited up for the Akita Northern Happinets in 2012 in the now-disbanded bj-league, scored 10 in the fourth.

Neither team could pull away in the first OT, and so another 5-minute bonus period was required.

In the second OT, balanced scoring helped the Jets stay afloat, with Togashi, Josh Duncan and Sebastian Saiz each scoring five points. For the Grouses (14-9), Richard Solomon scored nine of his 28 points in the period, with Mavunga providing five.

For Chiba, Duncan, a Xavier University alum, had 26 points and 11 rebounds, and Shuta Hara chipped in with 17 points.

After the game, Ono wasn’t pleased that his team squandered a big third-quarter lead, but said he needed to reflect on what he can do to put his team in a better position to win.

That said, Ono was pleased with the outcome.

“There are a lot of points to reflect on in the third quarter,” he told reporters, referring to Toyama’s rally. “But in a match that extends to double overtime, the important thing is to win at the end.”

Chiba defeated Toyama 98-82 in the series opener on Saturday, December 19. Togashi (18 points, eight assists, three steals) was one of six Jets players who reached double figures in points. Satoru Maeta paced the Grouses with 18 points, all on 3s.

Battle in the East

Seven of the 10 East Division teams have winning records. The Utsunomiya Brex (19-4), guided by Ryuzo Anzai, are one game behind the Jets in standings.

The Brex completed a two-game sweep of the visiting Alvark on Sunday, winning 86-70.

The hosts outscored Tokyo 31-18 in the second quarter. For the rest of the game, Utsunomiya owned a three-point advantage in scoring.

The Alvark fell to 12-11. Ahead of them in the East are the Kawasaki Brave Thunders and Sunrockers Shibuya (both at 15-8), while Akita owns a 14-9 record.

Among East teams, the Sunrockers wrapped up a two-game sweep of the struggling Hiroshima Dragonflies on Sunday, recording an 89-81 triumph. Leo Vendrame dished out 14 assists and Ryan Kelly, the beneficiary of many of Vendrame’s pinpoint passes, put 25 points on the board.

Meanwhile, the Levanga Hokkaido (5-18), who sit in the East cellar, bounced back from a weekend-opening defeat to beat the SeaHorses Mikawa 92-89 in overtime. Nick Mayo led the victors with 37 points.

Elsewhere, the Happinets avenged a Saturday setback by beating the Yokohama B-Corsairs 91-77. Akita relied on good passing (18 assists) and a limited number of mistakes (six turnovers).

With Mikawa’s aforementioned loss, the Ryukyu Golden Kings (17-6) maintained their share of the top record in the West, keeping pace with the SeaHorses.

The Golden Kings hammered the Shimane Susanoo Magic 89-69 on Sunday. The Magic (8-15) have lost seven straight.

The Kyoto Hannaryz (7-16) edged the Brave Thunders 84-83 on Sunday, a day after Columbia University alum and veteran perimeter marksman Keijuro Matsui, 35, turned back the clock and dropped 25 points on Kawasaki, matching David Simon for the team-high total.

The Gunma Crane Thunders, buoyed by the offseason acquisition of versatile inside stalwart Michael Parker and others, collected their 20th consecutive win on December 20, outplaying the Earthfriends Tokyo Z 93-88.

The Crane Thunders (22-2) have a six-game lead over the Ibaraki Robots in B2’s East Division.

In their latest victory, Gunma got a big boost from Brian Qvale (28 points, 12 rebounds) and key contributions from Justin Keenan (15 points), Parker (13) and Reiya Nozaki (12).

The 2020-21 NBA season tips off on Tuesday, December 22, and forward Yuta Watanabe joined a new organization for the new season.

The third-year pro has signed a two-way contract with the Toronto Raptors, it was announced on Sunday.

The two-way deal gives the NBA club flexibility in utilizing him for both the Raptors and the NBA G League’s Raptors 905.

With the Hustle, he benefited from steady playing time (32.7 minutes per game) and all-around improvement occurred. Watanabe averaged 17.2 points and 5.7 rebounds.

Also, keep an eye on Washington Wizards forward Rui Hachimura, the No. 9 pick in the 2019 NBA draft who is beginning his second season with the club. He missed the Wizards’ final two preseason games due to conjunctivitis.

Tokashiki was hurt in the Eneos Sunflowers’ 78-59 victory over the Fujitsu Red Wave at Yoyogi National Gymnasium No. 2.

A former WNBA player for the Seattle Storm, the 29-year-old Tokashiki was expected to be the cornerstone for the Japan national team during the delayed Tokyo Olympics. Now, the timing of her injury raises doubts about her chances of being available.

“I’m very frustrated, but I’ll try not to waste a single day in getting back to playing basketball,” Tokashiki was quoted as saying by Kyodo News.

With Tokashiki sidelined, the Sunflowers completed their objective and topped the Toyota Antelopes 87-80 in the tournament final for their eighth straight Empress’s Cup title on Sunday.