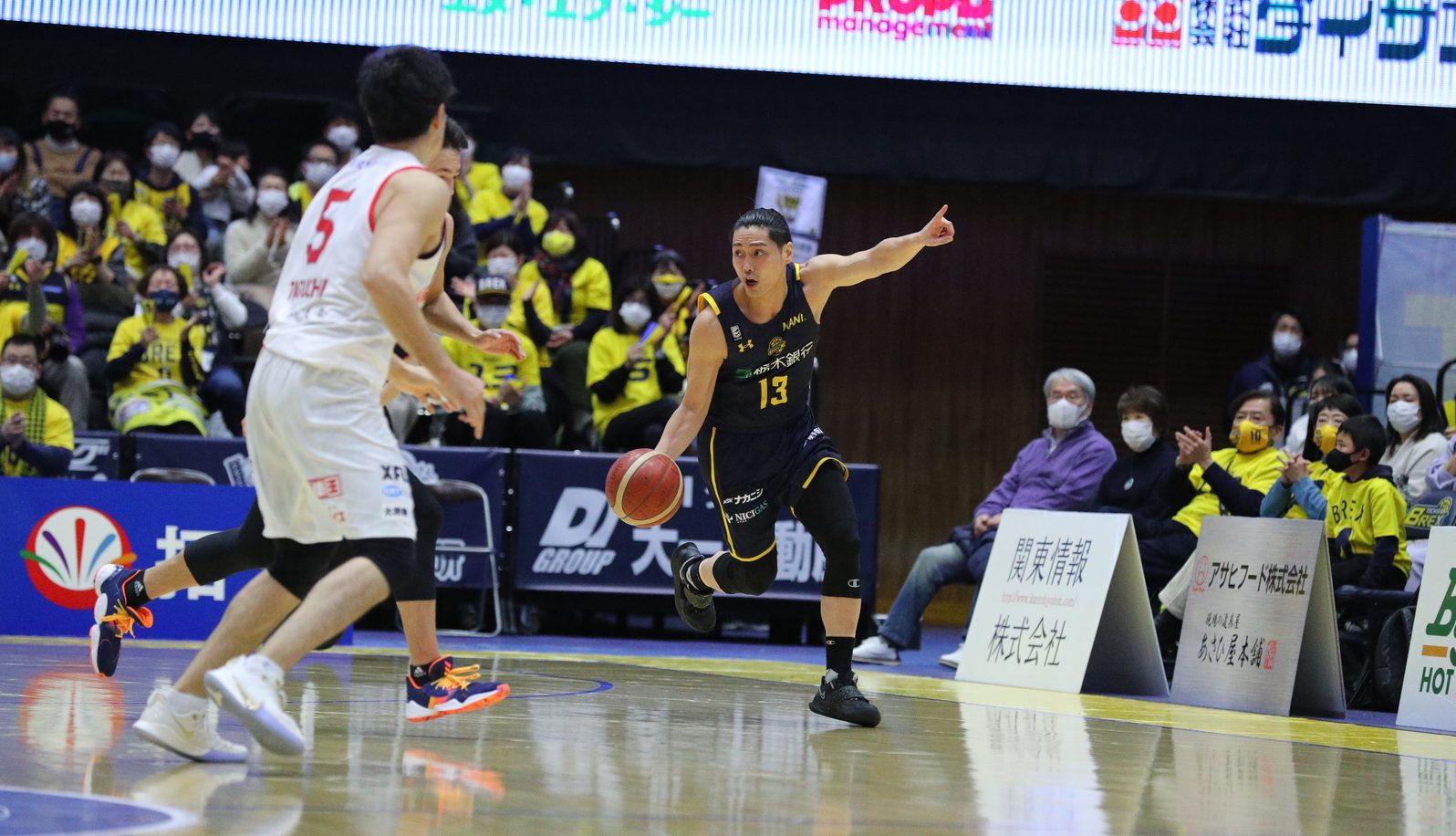 Brex guard Hironori Watanabe directs the offense against the Jets on January 24 in Utsunomiya, Tochigi Prefecture. Credit: B. League

Three-point shooting was a decisive factor in the Utsunomiya Brex’s latest victory.

In the marquee matchup between the B. League East Division heavyweights, Utsunomiya triumphed 88-76 on Sunday, January 24 to complete a weekend sweep.

In the series opener on the previous afternoon, the Brex recorded an 84-64 victory.

The sweep gives the Brex (24-5) a two-game lead atop the East Division standings.

Playing before their home fans, Utsunomiya got off to a solid start and took a 22-16 lead into the second quarter. Coach Ryuzo Anzai’s club extended its advantage to 44-28 by halftime.

Josh Duncan notched a double-double (20 points, 11 rebounds) for the Jets. Sebastian Saiz finished with 17 points and 13 boards. Yuki Togashi, who scored nine points and dished out five assists, was held to 3-for-10 shooting.

Looking back at the game, Anzai summed up his team’s inspired performance with a poignant observation: “It was our most focused game of the season.”

The Sunrockers (21-8) outscored the hosts 24-11 in the second period to take a commanding 48-26 lead into intermission. They cruised to their eight straight win.

Jordan Hamilton had 29 points, eight rebounds and seven turnovers for the Lakestars (10-19).

With a balanced inside-outside offensive attack, the San-en NeoPhoenix edged the Hiroshima Dragonflies 85-83 to complete the series sweep.

Stevan Jelovac led the NeoPhoenix (7-22) with 26 points and 10 rebounds. Kyle Hunt contributed 19 points and Hayato Kawashima made an impact with 12 points, eight assists and three steals.

The Alvark Tokyo jumped out to a 40-25 halftime lead and held on for a 90-55 road decision over the Shimane Susanoo Magic, giving coach Luka Pavicevic’s team its second straight away victory.

Masashi Hosoya ignited the Akita Northern Happinets on offense, connecting on 5 of 6 3-point attempts. Hosoya scored a team-best 18 points in a bounce-back, 96-81 win over the visiting Kawasaki Brave Thunders.

Kadeem Coleby provided 17 points on 7-for-8 shooting and Alex Davis had 13 points, seven rebounds and four blocks for Akita (19-10), which had five double-digit scorers.

The Brave Thunders had 20 assists and 23 turnovers.

Hokkaido (9-20) stretched its win streak to four on a day when Mayo, the league’s leading scorer (23.1 points per game), pulled down nine rebounds and made four steals.

The Osaka Evessa needed overtime to hold off the Niigata Albirex BB, but their 91-85 road triumph was their second win in as many days.

Kei Igarashi was the top scorer for Niigata (9-20) with a 23-point effort.

The SeaHorses Mikawa defeated the Nagoya Diamond Dolphins 84-71, sending the hosts to their sixth straight loss.

Kosuke Kanamaru and Davante Gardner scored 27 and 22 points, respectively, for the West Division-leading SeaHorses (21-8). Kyle Collinsworth handed out 11 assists, one shy of his season-high total.

Takumi Saito had 13 points and six assists for the Diamond Dolphins (16-13).

Elsewhere, the Toyama Grouses salvaged a weekend split with an 89-80 road win over the Shinshu Brave Warriors.

Toyama (19-10) closed out the game with a dominant fourth quarter, outscoring the hosts 30-19 over the final 10 minutes. Richard Solomon scored 11 of his 17 points in the fourth.

The Kyoto Hannaryz eked out an 87-85 home win over the Ryukyu Golden Kings to earn a weekend split.