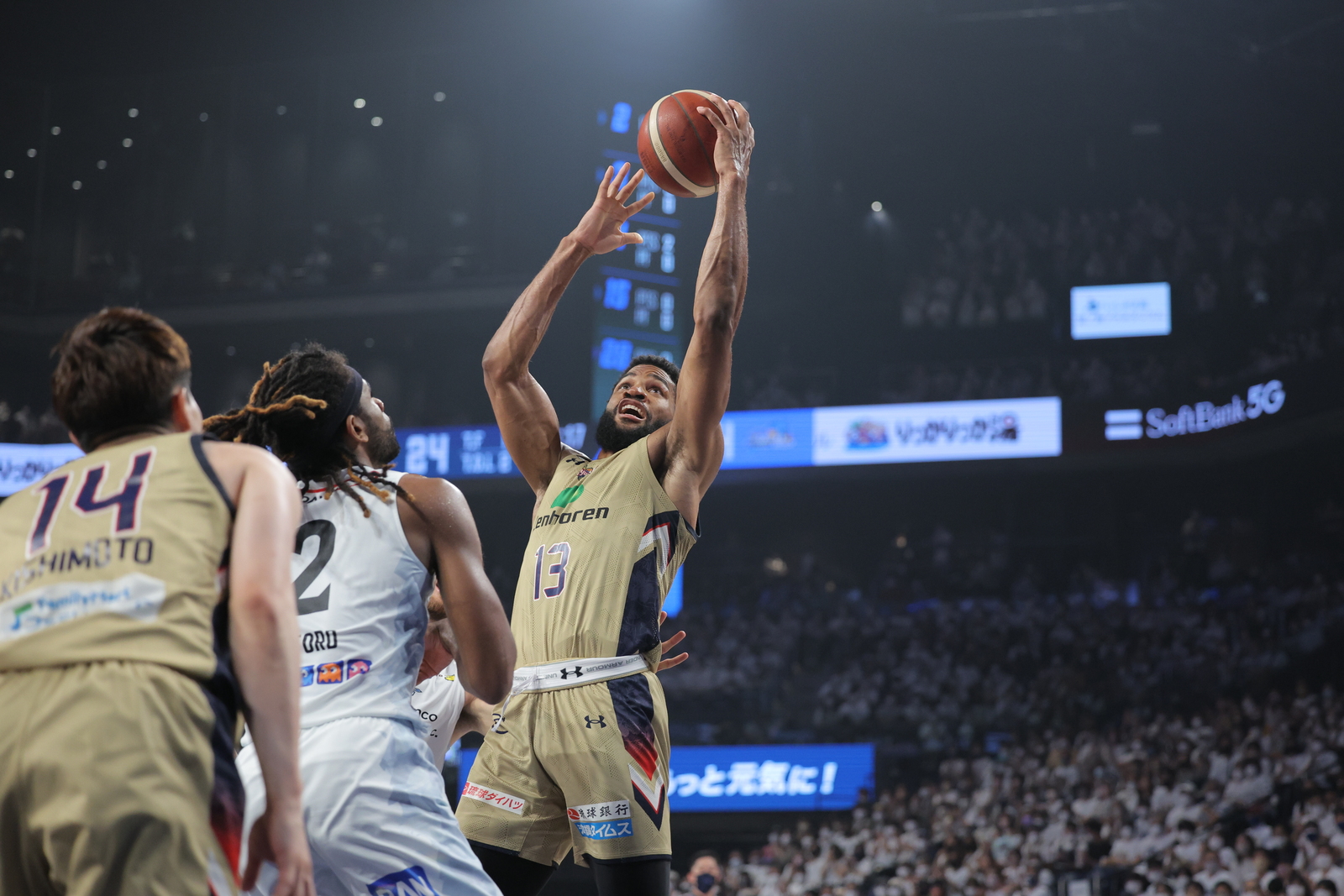 Ryukyu Golden Kings star Dwayne Evans played an instrumental role in his team's 72-70 win over the Shimane Susanoo Magic on May 22 at Okinawa Arena. (B.LEAGUE)

The final sequence produced a dream for the Ryukyu Golden Kings and heartbreak for the Shimane Susanoo Magic.

Ryukyu’s Dwyane Evans grabbed an offensive rebound with 2 seconds left on the game clock and scored on an inside jumper at the buzzer, lifting the Golden Kings to a pulse-rising 72-70 victory over the Susanoo Magic in Game 2 of their B.League Championship best-of-three semifinals at Okinawa Arena on Sunday, May 22.

The Brex, who won the B.League’s inaugural championship in 2017, reached the title series for the third time by eliminating the host Kawasaki Brave Thunders 77-73 in Game 2 on Sunday at Todoroki Arena. Coach Ryuzo Anzai’s club was the championship runner-up team last year.

Before Evans’ series-deciding shot, teammate Ryuichi Kishimoto missed a pull-up 3-pointer with about 3 seconds remaining before an announced crowd of 8,309.

With 11 seconds left, Susanoo Magic small forward Perrin Buford made an inside jumper and tied it at 70-70.

It set the stage for a dramatic finish on the other end of the court.

Without Evans’ heroics, overtime would have decided the game. And if the Susanoo Magic had prevailed, a Game 3 would’ve been held on Tuesday, May 24.

Instead, the Golden Kings, guided by first-year bench boss Dai Oketani, celebrated their dramatic victory as soon as possible.

“When I look back on today, I think it was a game that will be a good memory,” said Evans, a former All-Atlantic-10 Conference player for Saint Louis University. “I believed in the team throughout the season, and I think this is the result of everyone stepping up.”

Kishimoto said, “I think it was a splendid game. With the end of today's game, I think we will be in good shape for the final. I've been frustrated at the [results of the] semifinals in the past, and we’ve advanced to the finals, so I hope we can get a satisfactory result for my colleagues who have competed with me.”

The Susanoo Magic, who went 40-15 in the regular season under first-year coach Paul Hanare, led 60-53 entering the fourth quarter.

The hosts’ strong defense limited Shimane to 12 points in the final period.

Buford, who wrapped up his collegiate career at Middle Tennessee State in 2016, had 20 of his game-high 34 points in the first half. Teammate Reid Travis finished with 10 points.

The Golden Kings held Ando to six points on 2-for-12 shooting in Game 2.

Ryukyu’s effective passing was another trademark of the series finale. The Golden Kings dished out 20 assists and held the Susanoo Magic to 10.

Durham sparked the hosts with 19 points and nine rebounds and dished out six assists. Kishimoto poured in 18 points, Evans had a 12-point, seven-rebound performance and Narito Namizato contributed 10 points.

Buford had 27 points, eight assists and five steals. Travis scored 20 points and Ryosuke Shirahama had a season-high 17. Ando finished with six points on 2-for-9 shooting.

Utsunomiya recorded 83-70 and 77-73 road wins over East rival Kawasaki on Saturday and Sunday to return to the championship round for the second straight year.

Utsunomiya enhanced its chances of winning the series opener at the free-throw line, making 19 of 25 shots. Kawasaki was 7-for-10.

Matt Janning, who helped lead the Brave Thunders past the Nagoya Diamond Dolphins in the playoff quarterfinals, had a game-high 22 points. Nick Fazekas scored 20 and Naoya Kumagae had eight before fouling out. Jordan Heath grabbed 10 rebounds.

In Game 2, which featured 13 ties and 14 lead changes, Hiejima shined in an impactful 24-point, six-assist performance. Scott, a former University of Colorado standout, again had a strong effort at both ends of the floor, providing 17 points and 15 rebounds. Fieler chipped in with 12 points and nine boards and Ikaruga scored 10.

In the fourth quarter, Hiejima had 11 points, including 8-for-8 at the foul line.

When it was over, Hiejima said, ”I thought the fourth quarter was the game, but I think it's a worthwhile victory for the team."

After the first two games were both decided by less than 10 points, Game 3 of the B2 championship series was a one-sided win for the Fighting Eagles Nagoya.

Sendai trailed 20-7 after the first quarter and never recovered in a 75-44 loss on Sunday.

Coach Taizo Kawabe’s squad completed its quest to win the playoff title series after securing promotion to B1 for the first time by finishing in first place overall during the regular season. Sendai, the regular-season runner-up for best record, also earned promotion, returning to the B.League’s top flight for the first time since the 2016-17 campaign.

“I'm really happy that I was able to share the best scenery with the boosters,” Kawabe commented after the series-clinching win.

“Thank you to all the players, staff, family members, front desk staff and sponsors who fought together for a long season,” he added.

Randall, who played college ball at Temple University, was named the B2 playoffs MVP after averaging 15.7 points and 7.1 rebounds in seven postseason games.

Sendai’s Justin Burrell had 19 points and 13 rebounds in the opener. He also had an uncharacteristic eight turnovers.

Burrell led Sendai with a double-double (26 points, 12 rebounds) in the win.

The Kagawa Five Arrows were declared winners by walkover for Games 1 and 2 of their B2 third-place series against the Kumamoto Volters in Takamatsu.

The series opener on Friday was called off after a Volters player had tested positive for the coronavirus in the run-up to Game 1. He had been in close contact with teammates in recent days. As a result, the walkover resulted in a 20-0 Kagawa win.

The same score entered the record book for Game 2 the next day.