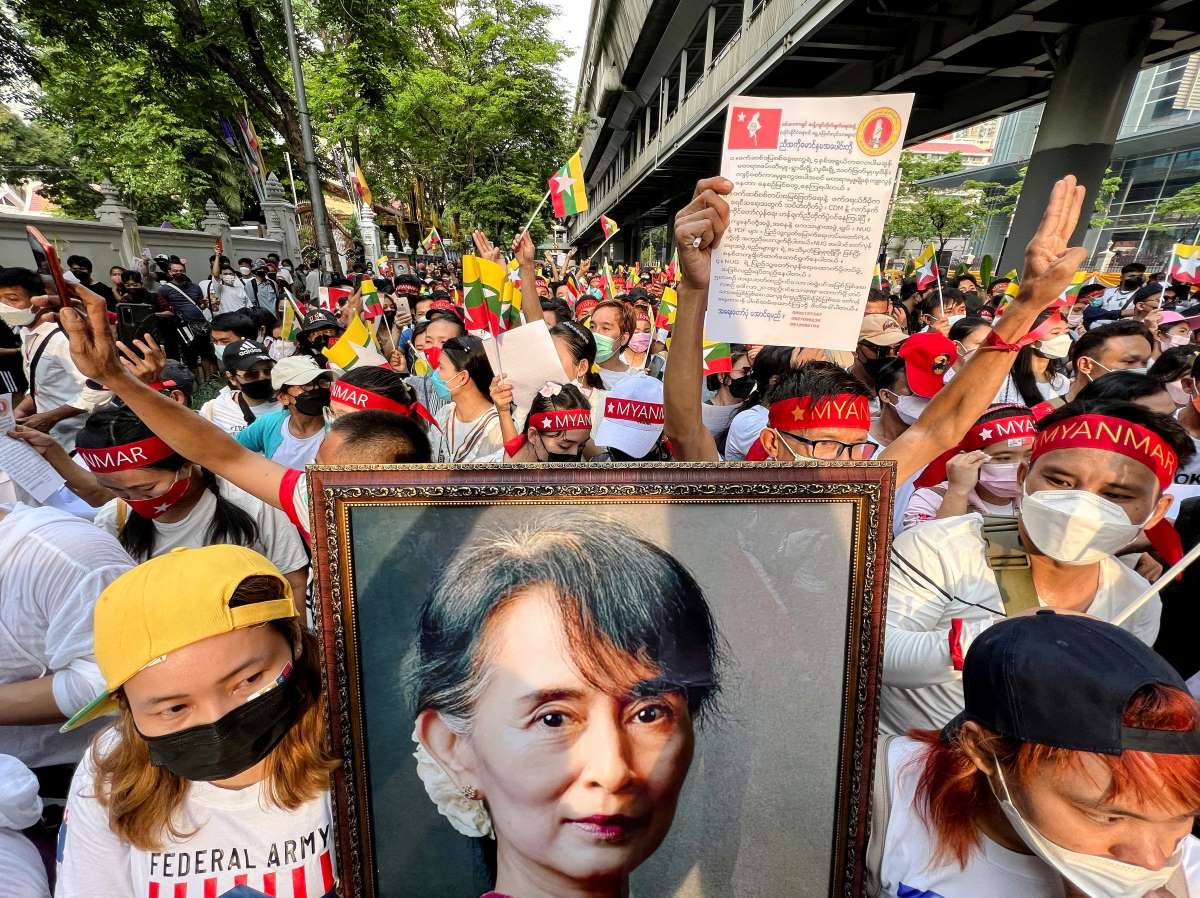 Myanmar demonstration against the military coup and to demand the restoration of democracy in their country during a protest to mark May Day, in Bangkok, Thailand May 1, 2022. REUTERS/Soe Zeya Tun

The world is heavily focused on Russia’s invasion of Ukraine. However, we must not forget the problems plaguing Myanmar.

There has been no movement toward normalization in the country, which has been under the rule of a military junta since a coup d’etat in 2020. Instead, the iron-fisted rule of the military government is becoming entrenched.

Some of the Southeast Asian state’s pro-democracy advocates have turned to an armed struggle. Reinforced by ethnic minority armed groups, pro-democracy forces have intensified their fighting against the Tatmadaw (the national army).

Myanmar’s economy has deteriorated severely because of the withdrawal of foreign capital, the declining value of the country’s currency, and soaring global prices associated with Russia’s invasion of Ukraine. This should not be allowed to continue.

To resolve the situation, all parties concerned must be brought to the negotiation table. In particular, the participation of Aung San Suu Kyi, leader of the National League for Democracy (NLD) and Myanmar’s toppled democratic regime who is detained by the military junta, is essential.

Myanmar’s military took control of the government in a coup in February 2021. Since then it has attempted to suppress dissent by cracking down on peaceful demonstrations and carrying out indiscriminate shootings.

Part of the pro-democracy interests and some ethnic minority armed groups have jointly formed the National Unity Government of Myanmar (NUG), embarking on an armed struggle with the aim of overthrowing the military junta.

There are about 20 ethnic minority armed groups in Myanmar, which have been in a state of civil war with the military for a long time. Pro-democratic youth have been provided training by these armed groups.

The start of dialogue by all parties is one of the agreements reached in a summit of the Association Southeast Asian Nations (ASEAN) in April 2021. Importantly, Myanmar’s military commander-in-chief Min Aung Hlaing was among those in attendance.

Ms. Suu Kyi is the top-priority figure among parties to the agreed-upon dialogue. It is therefore strange that the Myanmar military did not permit visits to Suu Kyi and other leaders of the NLD by the Cambodian vice prime minister when he visited Myanmar as a special envoy of ASEAN in March 2022. ASEAN must be firm in its attitude toward the Myanmar military junta.

Myanmar, suffering from a shortage in foreign currency reserves, has made it mandatory to exchange foreign currencies for kyat, Myanmar’s currency, for doing business in the country. This has brought strong complaints from businesses and the public. Such makeshift measures will only deepen the economic turmoil in Myanmar.

The United States and Europe have imposed sanctions on the country, but Russia and China have provided the Myanmar military with weapons and thrown their support behind the junta. It is a terrible thing to see the Myanmar military government declaring Russia’s invasion of Ukraine “legitimate.”

Japan meanwhile has clearly distinguished itself from the United States and Europe on the Myanmar issues, saying that Tokyo has its “unique channels of communication” with Myanmar’s junta. If so, the Japanese government must show some results soon, demonstrating how it will help resolve the current situation.