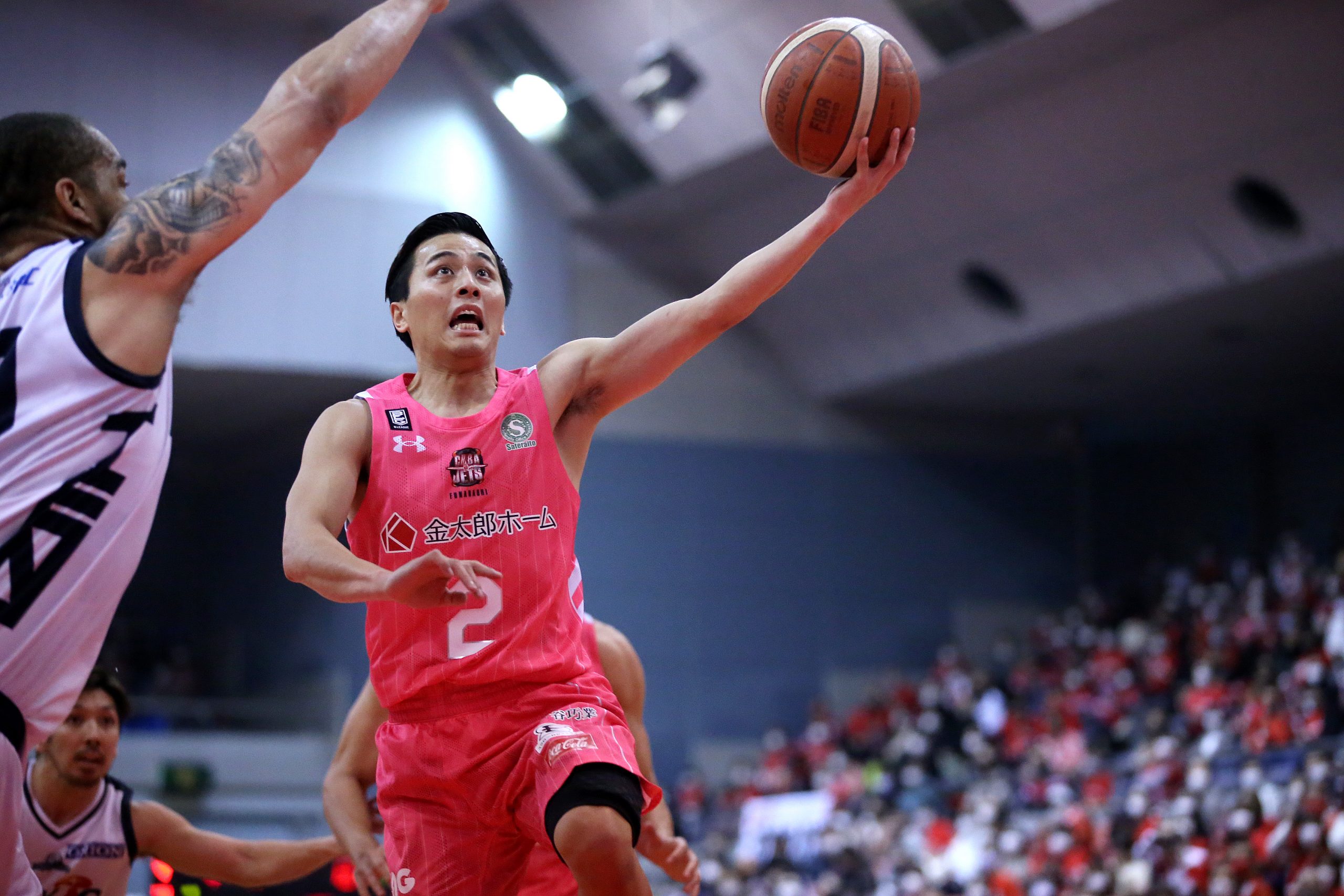 Funabashi, Chiba Prefecture ー The Chiba Jets have enjoyed sensational success in the regular season since the B. League's inception in 2016.

The Jets entered this season with 170 wins and 50 losses in regular-season play and immense popularity in their home prefecture. But a pair of championship runner-up finishes (2017-18 and 2018-19) also highlighted their sense of unfinished business during head coach Atsushi Ono's reign, which is now in its fifth season.

In other words, a winning foundation is the driving force of the team's success.

The Jets (29-9, including a 15-4 record at home) are once again in the title hunt and sit in second place in the 10-team East Division, only trailing the Utsunomiya Brex (30-7, six straight wins), while the Kawasaki Brave Thunders (26-12, five consecutive victories) have moved closer to the top in recent weeks.

Chiba completed a two-game sweep of the Shinshu Brave Warriors on Valentine's Day, recording a runaway 99-67 victory at Funabashi Arena.

The Jets led by as many as 36 points in the series finale. Holding the Brave Warriors to eight fourth-quarter points, they won the opener 70-64 on Saturday, February 13.

The rematch showcased the Jets' individual talents and cohesive play on offense and defense from both the starters and reserves. When Ono made player substitutions, the team's level of play remained at a consistently high level. Case in point: They outscored the Brave Warriors (13-24) in each of the four quarters.

Chiba built a 27-15 lead by the end of the first quarter. Starting center Sebastian Saiz, a Spaniard who attended the University of Mississippi, had eight points on 4-for-4 shooting in the tone-setting period, while captain Yuki Togashi, who played high school ball in the United States, dished out four assists in the opening stanza. Swingman Shannon Shorter, who lists his motto as "Never fold under pressure," on his player bio on the team website, was 3-for-3 from the floor for six points in the opening period.

With a bounce in his step and strong dribbling, Shorter made inside jump shots and a step-back J during a 12-2 spurt that stretched the Jets lead to 25-13 late in the first quarter.

In the second quarter, Shorter remained an offensive sniper, burying a 3-pointer from the right corner to make it 40-22. Jets starting forward Josh Duncan, a Xavier University alum, had the hot hand on offense with a team-leading nine points in the period. He sank 2 of 3 3-point attempts, while backup guards Fumio Nishimura (three assists) and Sota Okura (seven points) ignited the offense as the hosts extended their lead to 51-29 by halftime.

Togashi scored eight points in the third quarter, which ended with the Jets leading 63-50.

There was no letup for the title-chasing Jets in the fourth quarter, when they outscored the visitors 26-17. Saiz provided seven points in the fourth, with Shorter, Takuma Sato and Shigehiro Taguchi all scoring five points.

It was a reminder of their place within the league's overall stratosphere. The Jets are No. 2 in scoring (87.4 points per game). What's more, they are often winning by double-digit margins; they are yielding 76.7 ppg.

Chiba outrebounded Shinshu 38-30 and didn't make a number of costly mistakes on offense. For instance, the Jets had 23 assists and eight turnovers ー numbers that any coach would be pleased with.

Wearing pink jerseys on Valentine's Day instead of their customary red home uniforms, the Jets still stood out, not hiding their relentless defensive pressure, which contributed to the Brave Warriors' 15 turnovers. Chiba capitalized on the visitors' miscues, outscoring them 23-9 on points from turnovers.

For Ono, there was no need to deliver a detailed dissertation after the game to explain what had just happened. The results were easy to identify for anybody inside of Funabashi Arena, including the 2,284 spectators.

He expounded on the team's "hard work" and "good defense" while making several quick statements about the series finale. Then, he said, the focus shifted to the remainder of the regular season, which for the Jets is a tune-up time to get ready for the playoffs.

"We've got to take one step up," Ono said, citing a challenge he's made to his players to keep getting better, individually and collectively.

Okura didn't miss a shot (3-for-3 from the field, including one from long range, and was on target for both of his foul shots) in a nine-point outing. Backup small forward/shooting guard Takuma Sato finished with eight points.

For the Jets, the festive mood was dampened by a serious injury. Okura, appearing in his fourth game, sustained a torn anterior cruciate ligament and a medial collateral ligament rupture late in the game. A Tokai University student who was scheduled to return to school later this month, Okura was carried off the court on a stretcher. The initial diagnosis is for him to be sidelined for 12 months, the Jets announced a day later.

"Heal well, get stronger and come back," Togashi wrote.

Togashi and Shorter both made several razzle-dazzle passes and eye-catching forays through traffic to create scoring opportunities for themselves or their teammates. It was one subplot of the team's overall exciting offensive performance.

The 205-cm Saiz made his mark on defense, constantly challenging shooters as his long arms extended in front of them. He also ran the floor for scoring opportunities in transition and scored on a powerful slam dunk to give the Jets an 89-57 lead with just under 5 minutes left in the game. Yoshiaki Fujinaga initiated the play with a steal at the other end, then lofted a high pass to Saiz for an alley-oop.

Saiz, a key offseason acquisition who played for the Sunrockers Shibuya last season, didn't have one of his best games from a statistical standpoint. He was, however, an active presence. He also has eight double-doubles in his last 10 games, a reminder of his impact around the basket.

Sato was another hard-working defensive presence. After the game, he admitted that was his focus.

"I thought I hadn't been able to show my presence on defense in the last few games, and even in the match against the Alvark Tokyo, my mistake caused Tanaka to [make] 3-point shots," Sato said, referring to the Tokyo star's 5-for-9 3-point shooting performance in the rivals' latest matchup.

"So, first of all, I wanted to prove what my strengths were, so I entered the game with a strong feeling."

The Alvark defeated the Jets 82-77 on Wednesday, February 10 at Arena Tachikawa Tachihi.

In the rematch against the Brave Warriors, standout forward Gavin Edwards, who joined Chiba in 2017, got into foul trouble and only played 10-plus minutes in the rout.

Keep An Eye On Ryukyu

In the West Division title race the Ryukyu Golden Kings are hitting their stride. With eight straight wins, Ryukyu (28-9) has extended its lead in the 10-team West to four games over the SeaHorses Mikawa (24-13), Edwards' former club.

The Nagoya Diamond Dolphins (22-15) and Osaka Evessa (21-16) are also making the most noise among the West's playoff contenders.