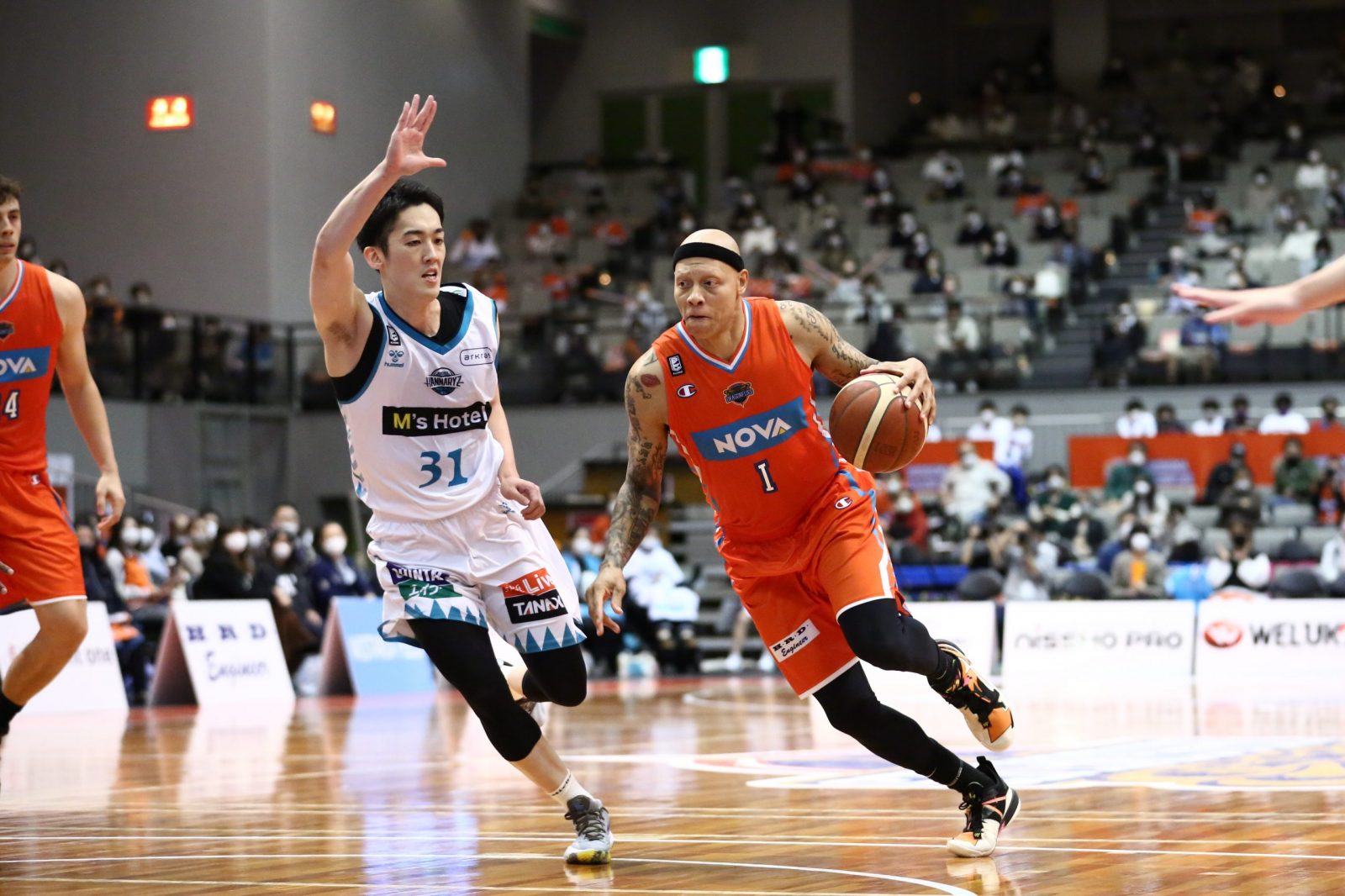 Hiroshima Dragonflies forward Thomas Kennedy drives to the basket against the Kyoto Hannaryz on October 24. (B. LEAGUE)

A roster overhaul and new leadership spearheaded by veteran bench boss Kyle Milling have combined to propel the Hiroshima Dragonflies to a successful start to the 2021-22 B. League season.

Through Sunday, October 24, the Dragonflies are 7-1, the best record in the 22-team top division. (There are 14 teams in the second division, aka B2.)

The Dragonflies faced a good early season test on Wednesday, October 27 against one of their top West Division rivals, the title-chasing Ryukyu Golden Kings, who entered the game with a 6-2 record.

Last season, the Dragonflies had the worst record (9-46) in the B. League in Takeshi Hotta’s second and final season at the helm. Hotta is now coaching the B2’s Aomori Wat’s.

The Dragonflies won four straight games prior to the aforementioned contest in Okinawa City, including an 85-77 overtime victory over the Kyoto Hannaryz on Sunday.

“It was a really tough fight,” Milling said after the game. “Both teams were physically and mentally tired from the [intense competition].”

Veteran shooting guard Naoto Tsuji, one of six newcomers on the Dragonflies roster when the season tipped off in early October, ignited the club in OT. He poured in eight points as the hosts outscored the Hannaryz 13-5 to earn the victory.

Tsuji was 3-for-3 from the floor, including a key 3-point basket in the bonus period, and also made a steal. He finished with a team-high 21 points.

The 32-year-old Tsuji is averaging a team-best 14.8 points and 4.0 assists for his new team. Tsuji’s scoring ability has helped carry the Dragonflies offense. He dropped 28 points on the San-en NeoPhoenix on October 17.

Before switching teams, he suited up for the Kawasaki Brave Thunders in 2020-21 and contributed 9.1 points while making 52 starts in his ninth season with the team.

Discussing his take-charge mindset in overtime, Tsuji said, “I had a strong desire to win. That led to that kind of play.”

The Dragonflies, who opened last weekend with an 85-70 victory over the Hannaryz on Saturday, October 23, relied on solid contributions from several players in their OT triumph. Newcomers Charles Jackson, Nick Mayo and Ryo Terashima combined for 39 points. Returning standout Thomas Kennedy, who won a bj-league title with the Yokohama B-Corsairs in 2012-13, added eight points.

Jackson, a bruising inside presence who wrapped up his college career at Tennessee Tech, finished one rebound shy of a double-double (15 points, nine boards). The 28-year-old joined Hiroshima after spending the past two seasons with the Sunrockers Shibuya.

Mayo, the B. League’s leading scorer in 2020-21 (21.5 points per game) and Eastern Kentucky’s all-time leading scorer, contributed 17 points, eight rebounds and five assists. An NBA Summer League forward for the Golden State Warriors this year, Mayo, 24, signed with the Dragonflies after a stellar season for the Levanga Hokkaido and has demonstrated his all-around skills in the early going as a key component on offense (14.4 points and 3.8 assists).

Terashima had a seven-point effort in the weekend finale. The 24-year-old point guard averaged 8.1 points in 55 games (all starts) for the Hannaryz last season. He made steady contributions for his new team in the first month of the B. League campaign, providing 11.4 points and 3.5 assists per game.

In looking at the numbers for eight completed games on their 60-game schedule, the Dragonflies’ stellar rebounding is a key ingredient for success.

A season ago, they averaged 30.6 rebounds per game. Only the Levanga (29.9) averaged fewer rebounds.

Knowing that capable rebounders are on their side gives the Hiroshima players some peace of mind, according to Terashima.

“Even if you make a mistake, your teammates will pick you up, so you can take the plunge and shoot,” Terashima was quoted as saying by The Chugoku Shimbun.

Entering a busy slate of games on Wednesday, 13 of 22 B. League teams had between three and five wins.

According to the league’s injury list protocol, a player must be inactive for 30 days before being eligible to compete again.