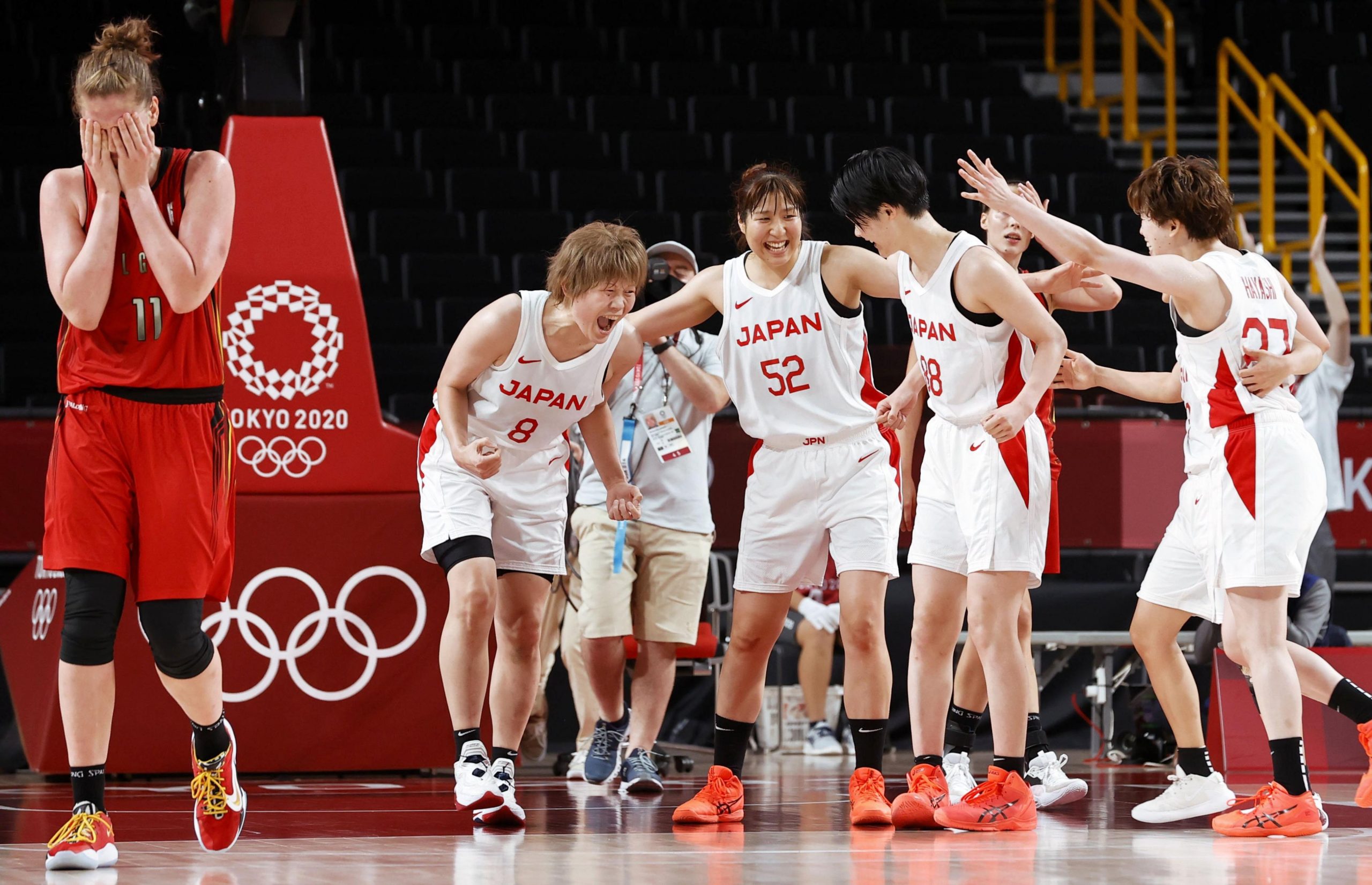 The Japan women's basketball team celebrates its 86-85 victory over Belgium in the Olympic tournament quarterfinals on August 4 at Saitama Super Arena.

Saki Hayashi buried a stop-and-pop 3-pointer with 15.2 seconds to play in a thrilling women’s basketball quarterfinal game at the Tokyo Olympics, lifting Japan to an 86-85 win over Belgium on Wednesday, August 4.

Belgium’s Kim Mestdagh missed a 2-point attempt to the right of the free-throw line as time expired at Saitama Super Arena.

Japan’s players hugged and celebrated before walking off the court, savoring the special moment.

He was equally ecstatic after the game, and wasn’t shy about telling reporters why.

“I felt bad for my over-exuberant celebration,” Hovasse said. “I didn’t mean any disrespect to Belgium. I literally lost my mind for about 20 seconds after the buzzer went off. It was amazing. I hadn’t felt that way in a long, long time.”

Japan advanced to the quarterfinals at the 2016 Rio de Janeiro Olympics and lost 110-64 to the United States, the eventual champion.

Yuki Miyazawa was Japan’s perimeter marksman in this game. She led Japan with 21 points, making 7 of 13 3-point shots. Maki Takada added 19 points. Rui Machida had 10 points and 14 assists with only one turnover. Himawari Akaho contributed 12 points and seven rebounds, Nako Motohashi chipped in with 10 points and Hayashi had nine.

“I feel very relieved after the results of today’s match,” Miyazawa was quoted as saying by The Associated Press. “For me particularly, my job is to [make] 3-point shots, so I’m very happy that I was able to have seven.”

Japan, the world’s 10th-ranked team, trailed 42-41 at halftime. Belgium dominated at the start of the second half, and it looked like the game might turn into a rout. The world’s sixth-ranked team grabbed a 58-45 lead on a Julie Allemand basket with 5:41 to play in the third quarter.

Motohashi drained a 3-pointer, one of Japan’s 14 3s in the game, to ignite a comeback.

Miyazawa knocked down another 3 to pull Japan within 60-55 with 2:38 to play in the third.

Belgium led 68-61 entering the fourth quarter and extended its advantage to 70-61 early in the final period.

But Japan was relentless on defense and patient on offense down the stretch.

Miyazawa nailed a 3-pointer, giving her 15 points at that big moment, to cut it to 70-64. The 28-year-old Yokohama native was the recipient of Machida’s pinpoint passes all night and made the most of her scoring opportunities.

But Japan, namely Machida, kept feeding the ball to Miyazawa, and the confident shooter sank another big shot on Japan’s next possession and another Miyazawa trifecta slashed the lead once again. Now it was 72-67.

Over the next several minutes, Takada and Akaho also made big baskets to help fuel Japan’s comeback. An insider jumper by Akaho leveled the score at 81-81 with 1:45 remaining.

Mestdagh put Belgium ahead again, 83-81. Then Takada tied it at 83-all with 52 seconds remaining.

If you blinked, you missed an exciting highlight or two during the final moments of the high-drama game.

Seconds later, Alemand missed a layup on a fast-break chance.

She atoned for the miss by making two free throws with 37 seconds left, giving Belgium an 85-83 lead.

Japan didn’t panic. Machida ran the offense with poise and passed the ball to Hayashi, who was standing beyond the 3-point arc. Hayashi dribbled and then nailed the aforementioned game-winning shot.

In other quarterfinal action, Serbia defeated China 77-70, the United States topped Australia 79-55. France defeated Spain 67-64 in the late game, which got underway at 9 p.m.