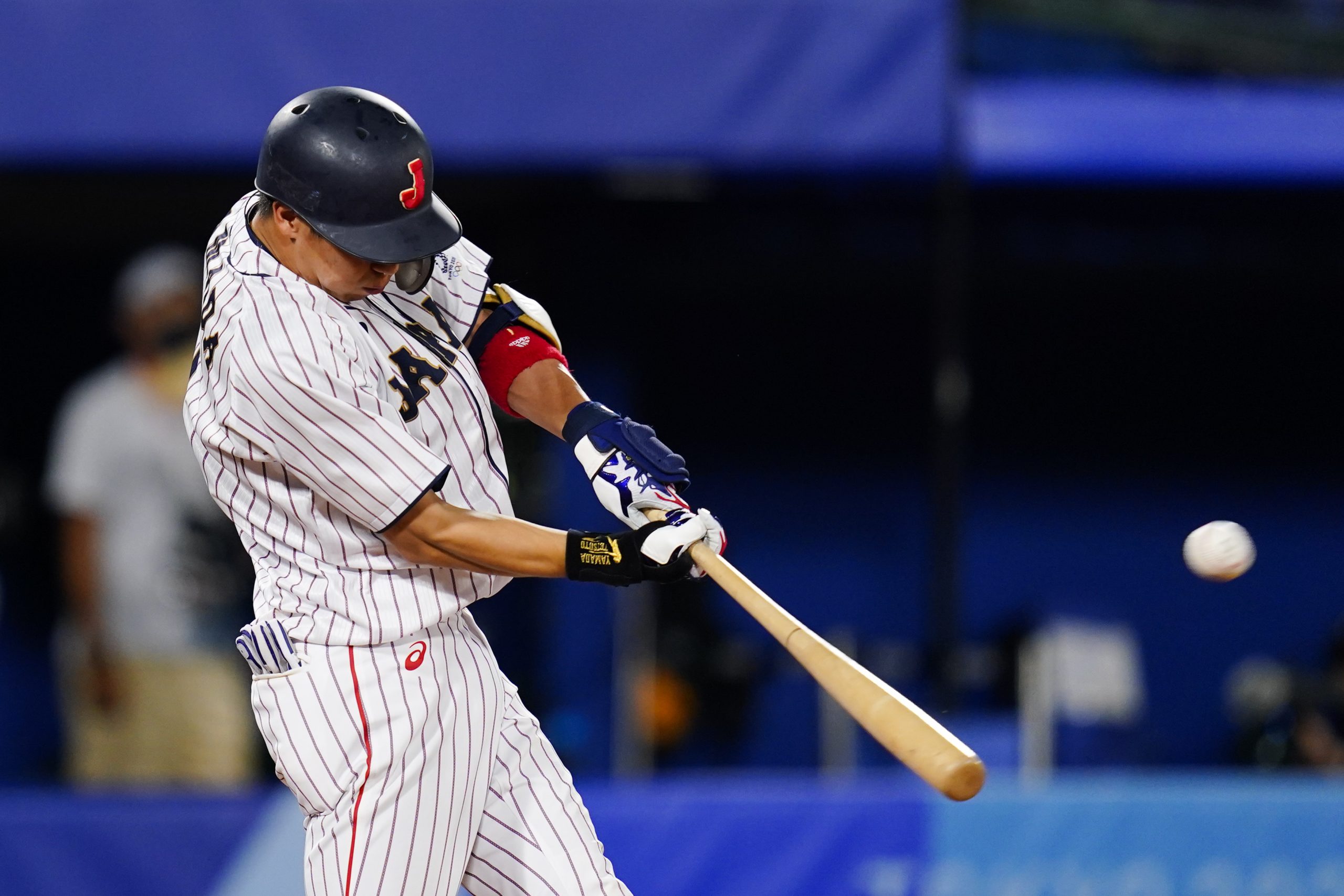 Japan's Tetsuto Yamada hits a three- run double in the eighth inning against South Korea in the semifinals of the Olympic baseball tournament at Yokohama Stadium on August 4. (Matt Slocum/AP)

Tetsuto Yamada came through when it mattered most.

Yamada, a six-time NPB All-Star, hit a bases-loaded double in the bottom of the eighth inning on Wednesday, August 4, to lead Japan to a 5-2 win over South Korea and into the final of the Tokyo Olympics baseball tournament at Yokohama Stadium.

Ryoji Kuribayashi retired the side in the ninth to earn the save as Japan improved to 4-0. The result ensured that Japan will win a medal in Olympic baseball for the first time since taking the bronze in Athens in 2004. Japan failed to win a medal in Beijing 2008, the last time baseball was contested in the Olympics.

Kensuke Kondo reached on a fielder’s choice in the eighth and advanced to second on a wild pitch.

South Korea then elected to intentionally walk Munetaka Murakami. Takuya Kai walked to set the stage for Yamada’s clutch hit off reliever Woosuk Go that missed being a grand slam by about one foot.

“I decided in the on-deck circle to swing at the first pitch,” Yamada said. “I got a pitch I could drive and was thrilled that I could come though in that situation. I hope I can keep up this form in the final and help the team win a gold medal.”

In the final on Saturday, August 7, Japan will face either the United States or South Korea and will be bidding for its first-ever Olympic gold medal, earning either a silver or gold medal.

Japan reliever Hiromi Ito picked up the win after coming on in the seventh and giving up one hit over two scoreless innings.

“Our players realized the importance of this game and really came through,” said Japan manager Atsunori Inaba. “The pitchers were especially good and got us out of some tight situations.”

Japan took a 2-0 lead on a sacrifice fly by Hayato Sakamoto in the third inning and an RBI single by Masataka Yoshida in the fifth that scored Yamada from third. But South Korea tied it with two runs in the top of the sixth.

Hae Min Park led off with a single to left and advanced to second on an error by Japan left fielder Kensuke Kondoh.

Baekho Kang singled to left, scoring Park. Hyunsoo Kim then drove in Hang on a single to center.

Earlier, the United States beat the Dominican Republic 3-1 to advance to the semifinals.

Triston Casas hit a two-run homer in the first inning to power the U.S. squad.

Starter Scott Kazmir gave up just two hits while striking out five over five scoreless innings for the win.

Tyler Austin, who plays for the Yokohama BayStars, hit a solo homer in his home park in the bottom of the fifth.