Balanced scoring carried the Chiba Jets Funabashi to a comprehensive victory over the Nagoya Diamond Dolphins in their weekend finale of the B. League’s Week 4.

With five double-digit scorers, the Jets romped past the Diamond Dolphins 95-72 at Funabashi Arena to complete a two-game series sweep on Sunday, October 25.

Josh Duncan paced the title-chasing Jets with 22 points, frontcourt mate Gavin Edwards poured in 17 points and corralled a team-high nine rebounds, while key backup guard Fumio Nishimura jumped in with 14 points on 5-for-6 shooting with six assists in 12-plus pulsating minutes. Chiba point guard Yuki Togashi made a big impact with 13 points, seven assists and zero turnovers. Sebastian Saiz chipped in with 10 points. 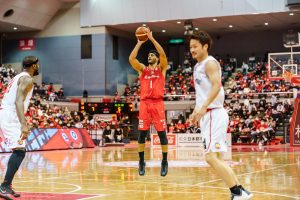 Veteran forward Josh Duncan shoots a jump shot in the Jets’ win over the Diamond Dolphins on October 25. Credit: B. League 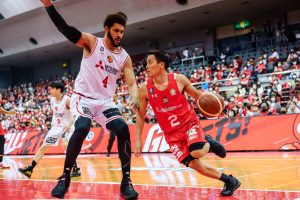 Reflecting on his performance and overall play this season so far, Nishimura admitted that he has struggled with his shot.

“So I’m glad I was able to regain the feeling of shooting and contribute to the team today,” Nishimura told reporters.

Chiba outscored the visitors 30-19 in the fourth quarter to secure the win.

Jets swingman Raita Akaho, who attended nearby Ichiritsu Funabashi High School, made his first basket of the season, knocking down a 3-pointer with 1:17 left in the fourth quarter. That made it 93-72.

“I’m happy to be able to play here,” the 22-year-old Akaho told reporters.

For Nagoya, Justin Burrell provided 15 points and 13 rebounds and Jeff Ayres finished with 14 points and 10 boards. 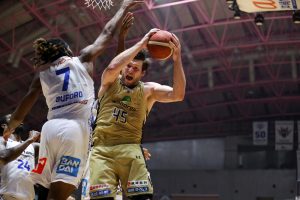 Ryukyu’s Jack Cooley grabs a rebound in the fourth quarter on October 25. Credit: B. League

Ryukyu vs. Shimane: Golden Kings center Jack Cooley, a University of Notre Dame alum, scored 25 points, making 9 of 11 shots from the floor, and pulled down 18 rebounds against the Susanoo Magic. Reid Travis led the out-of-towners with 18 points.

Utsunomiya vs. Shibuya: Ryan Rossiter made the first of two free throw attempts with 1 second left as the Brex won by the slimmest of margins. Rossiter had 27 points and 12 rebounds. 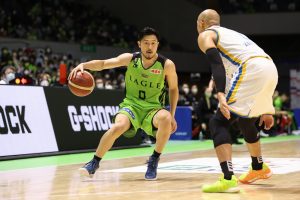 Shiga vs. Hokkaido: Australian center Angus Brandt dominated in the post with a 24-point outing and Jordan Hamilton had a strong all-around game (20 points, eight rebounds, eight assists) for the victorious Lakestars. Second-year pro Nick Mayo paced the Levanga with 28 points on 14-for-23 shooting, Mayo leads B1 with 23.9 points per game. Also for Hokkaido, point guard Ryoma Hashimoto dished out 10 assists and had zero turnovers, his third straight game without turning the ball over.

Niigata vs. Kyoto: Newcomer Mark St. Fort put 26 points on the board for the Albirex and guard Yuto Nomi had a season-best 18 points with eight rebounds and five assists. The Hannaryz got 34 points from David Simon and 29 from Rayvonte Rice in defeat.

Akita vs. Yokohama: In a game in which teams failed to score 70 points, the B-Corsairs made just 18 baskets (they attempted 50). Happinets forward Alex Davis was the high scorer with 13 points. 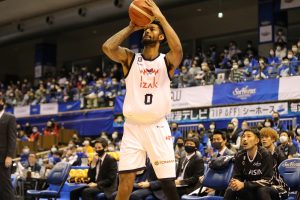 Toyama forward Richard Solomon sparked his club with 21 points and 25 rebounds on October 24. Credit: B. League

Shinshu vs. Kawasaki: In their first season in the first division, coach Michael Katsuhisa’s club collected a big upset win, edging the Brave Thunders in the series opener in Nagano. Josh Hawkinson, a Washington State alum, led the way with 28 points, converting 10 of 14 shots. Catalyst Anthony McHenry had 13 points, nine rebounds and five assists, while Louis Kurihara chipped in with 11 points and six assists and Tatsuya Nishiyama. Center Wayne Marshall made his season debut and provided six points, three assists and a block off the bench in 15-plus minutes. (Marshall started in the series finale and notched a double-double with 19 points and 10 rebounds.) For Kawasaki, Nick Fazekas, who had 26 points on 11-for-24 shooting, was the only double-digit scorer.

Kyoto vs. Niigata: Rayvonte Rice and David Simon had 31 and 30 points, respectively, to carry the Hannaryz past the Albirex. 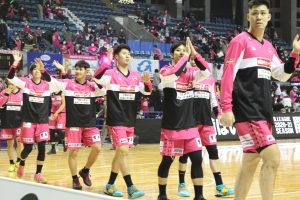 Happinets players salute the team’s fans after their victory over the B-Corsairs on October 24. Credit: B. League

Akita vs. Yokohama: Takatoshi Furukawa struggled to score against the B-Corsairs in the series. He made 4 of 19 shots from the floor, and stepped to the free-throw line with the game on the line in the final minute. Furukawa sank two free throws with 3 seconds remaining to account for the final score. Yokohama’s Aki Chambers missed a 3-pointer at the other end of the court on the game’s final play. Furukawa, meanwhile, had a 15-point game, making 6 of 8 free throws.

Tokyo vs. Osaka: Alex Kirk controlled the game from the center position. The Alvark star led all players with 30 points and was virtually unstoppable on offense (14 of 18) in the rout.

Hiroshima vs. San-en: Dragonflies pivotman Gregory Echenique put his stamp on the game with 15 points, 22 rebounds and a troika of blocked shots. For the NeoPhoenix, newcomer Nenad Miljenovic had a productive yet slightly erratic performance with 13 points, seven assists, six turnovers and six steals.

Shiga vs. Hokkaido: The Lakestars rallied from a 27-13 deficit at the end of the first quarter to defeat the hosts. Jordan Hamilton (20 points) was one of five Shiga players with 10 or more points. Levanga sharpshooter Tsukasa Nakano’s season-high 21-point outburst occurred in the loss.

Ryukyu vs. Shimane: On a team with several established go-to players, Golden Kings swingman Keita Imamura, 24, stepped up and delivered a big-timer performance, scoring a season-best 22 points. Imamura canned 5 of 7 3-point attempts in the hosts’ triumph.