BASKETBALL | Kyoto Hannaryz Rally Past SeaHorses Mikawa in Second Half 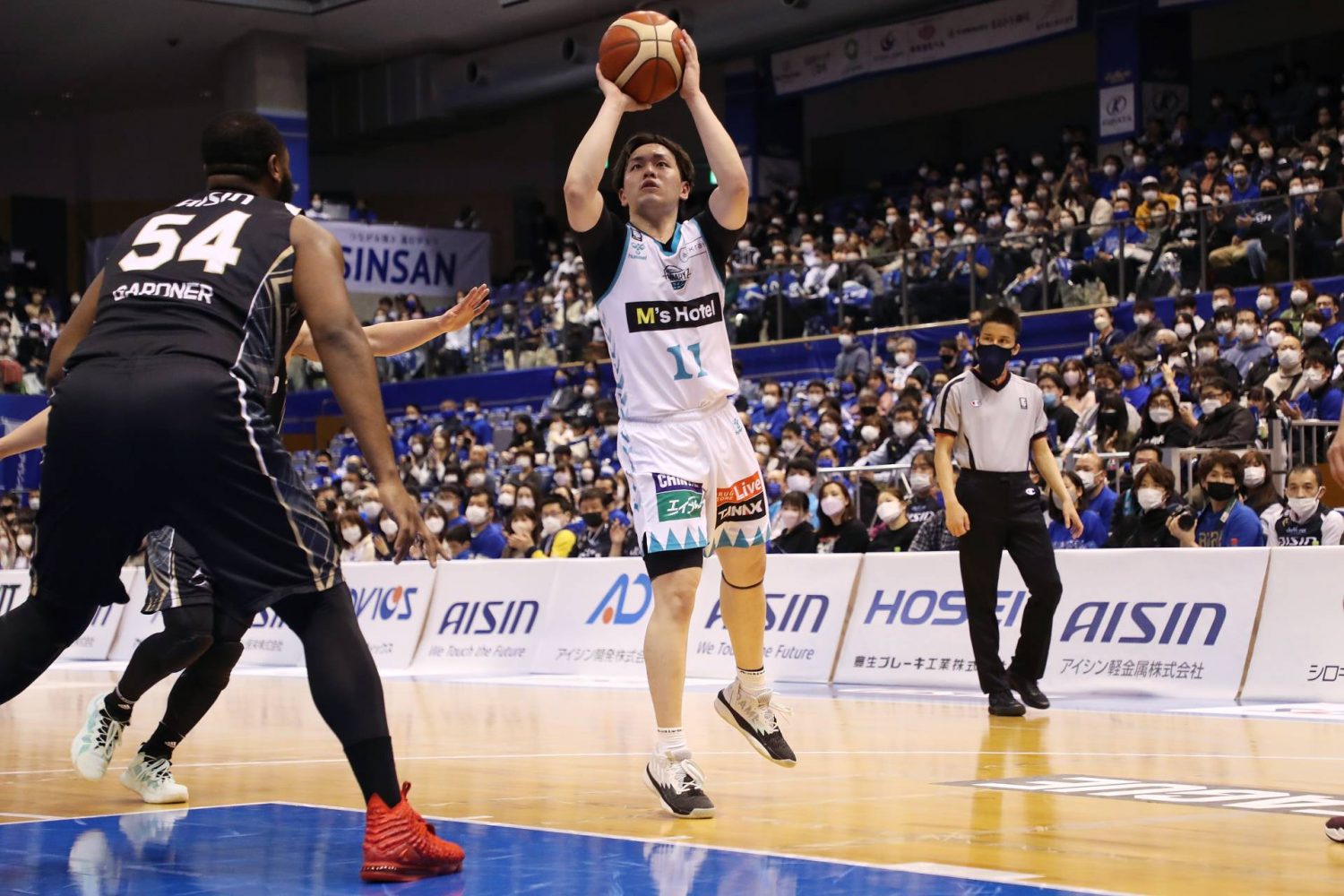 Kyoto Hannaryz guard Yoshiaki Kubota pulls up to shoot a jumper against the SeaHorses Mikawa in Kariya, Aichi Prefecture, on April 3. (B. LEAGUE)

The Kyoto Hannaryz trailed after the opening quarter, at halftime and for much of the game. But they still found a way to overcome the SeaHorses Mikawa on Sunday, April 3, winning 80-72 and bouncing back from a loss on the previous day.

Kyoto didn’t reinvent the wheel while picking up its 13th victory in its 45th game of the B. League season.

Simply put, the Hannaryz needed more points to have a shot at beating Mikawa in Kariya, Aichi Prefecture.

The SeaHorses (23-18), who led 15-8 entering the second period, 35-23 at halftime and 50-45 heading into the final stanza, failed to slow down Kyoto’s offense, which increased its scoring output every quarter.

Early in the fourth quarter, Mikawa led by seven points on two occasions. But the visitors remained focused and chipped away at the lead.

Both teams had opportunities to pull away in a back-and-forth fourth quarter.

Shooting guard Kazuki Hosokawa sank two 3-pointers in the span of 39 seconds as the Hannaryz tied it at 59-59 with 5:03 remaining.

The SeaHorses’ Yudai Nishidai made the first of two foul shots with 51 seconds left to even things up at 72-all, then missed his second attempt.

Kyoto big man David Simon hit a jumper with 35 seconds left, giving his team a 74-72 lead. He added another inside bucket with 21 seconds to play, extending the lead to four.

In the final 10 seconds, Hannaryz teammates Yoshiaki Kubota and Justin Harper made two free throws apiece to account for the final score.

In the fourth quarter, Simon scored 13 of his game-high 29 points, while Harper added 10 of his 21 points. Kyoto made 12 of 15 shots from the field in the decisive quarter.

Nishidai paced the SeaHorses with 17 points. The rising star, who turned 23 on March 13, had a season-high 30-point performance against the Nagoya Diamond Dolphins on March 23. Ryogo Sumino scored 14 points and Davante Gardner had 13 for Mikawa, which slipped to 11-10 at home.

Kyoto improved to 6-19 in away games a day after losing the weekend series opener 85-80.

Ogawa, in his second season at the helm, said his team exhibited poise while recovering from a slow start on Sunday.

“There were many difficult situations in the first half, but the players continued to fight patiently and finally made a big quarter, so I feel that we are growing as a team,” Ogawa said after the game.

Kubota said the team made some adjustments at halftime, which helped trigger its comeback.

“In the first half of the game, we couldn’t play the basketball we wanted to do, but in the second half we were able to play our basketball from the beginning,” Kubota told reporters. “There were times when things didn’t go well, but I think the fact that the whole team was able to [make contributions] led to the victory.”

The Ryukyu Golden Kings cruised past the Shiga Lakestars on Sunday, winning 94-78 to complete a series sweep and win their ninth straight.

The Golden Kings have a league-best 39-4 record.

Jack Cooley paced the hosts with 18 points and 12 rebounds. Koh Flippin, Keita Imamura poured in 12 points apiece, and Ryuichi Kishimoto and Dwayne Evans both had 10. Narito Namizato and Allen Durham each contributed nine points and seven assists at Okinawa Arena.

The Osaka Evessa routed the San-en NeoPhoenix for the second time in as many days on Sunday, recording a 108-81 home victory.

Filipino guard Thirdy Ravena had a team-best 21 points for the NeoPhoenix (8-36). He reached 20 points for the first time since January 29 against Kyoto, when he scored 26.

The Alvark Tokyo outscored the Gunma Crane Thunders 29-13 in the fourth quarter on Sunday, the finishing touches on a 91-83 road victory.

The Utsunomiya Brex collected two victories against East rival Niigata Albirex BB over the weekend, wrapping up the two-game road series with a 92-62 Sunday win.

The Brex (32-13) capitalized on the Albirex’s miscues, scoring a jaw-dropping 37 points from Niigata turnovers.

Rosco Allen was the top scorer for the Albirex (5-38), finishing with 20 points.

Quick Recaps of Sunday’s Other Games

The Chiba Jets edged the host Ibaraki Robots 87-82. Josh Duncan led the reigning champions with 21 points, Christopher Smith added 19 and Yuki Togashi shined with 14 points and 14 assists for the Jets (27-7), winners of two in a row.

The Toyama Grouses topped the visiting Yokohama B-Corsairs 92-76, jumping out to a 53-30 lead by halftime.

Julian Mavunga was Toyama’s leader in points (19) and assists (seven), with Brice Johnson and Joshua Smith each scoring 18 points. Toshiki Kamisawa, a 23-year-old guard, added a season-high 15 points for the Grouses (18-29).

The visiting Sunrockers Shibuya dominated in the fourth against the Levanga Hokkaido en route to a 76-68 win.