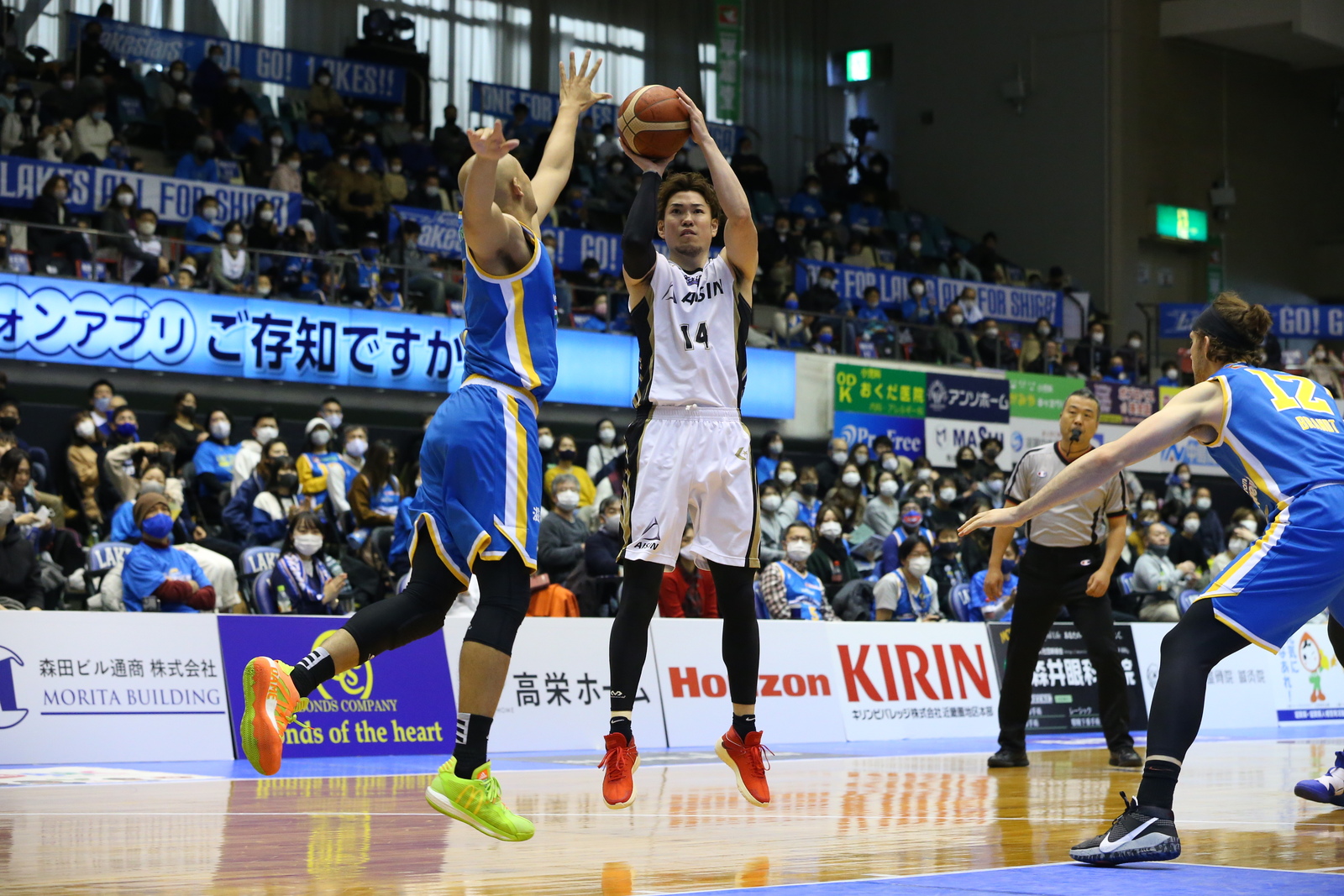 Pro sports teams are expected to perform better at their own home venues. The familiarity of playing at home is supposed to give them an edge over their opponents.

Some teams, of course, thrive while playing on the road.

Such is the case with the SeaHorses Mikawa this season. Coach Kimikazu Suzuki's club extended its winning streak to five on Sunday, December 6 by trouncing the Shiga Lakestars 83-60.

The SeaHorses (13-5 overall) improved to 10-2 in road games, and share the top record in the B. League's West Division with the Ryukyu Golden Kings.

In the series finale in Otsu, Shiga Prefecture, Mikawa transformed a 38-37 halftime lead into a commanding advantage entering the final quarter.

Shiga outscored the hosts 24-5 in the third quarter.

Veteran sharpshooter Kosuke Kanamaru ignited the SeaHorses with 30 points on 11-for-16 shooting, including 4 of 7 from the 3-point range. Center Davante Gardner chipped in with 17 points, eight rebounds and seven assists. Point guard Kyle Collinsworth, a former Brigham Young University and Dallas Mavericks player, dished out 10 assists. 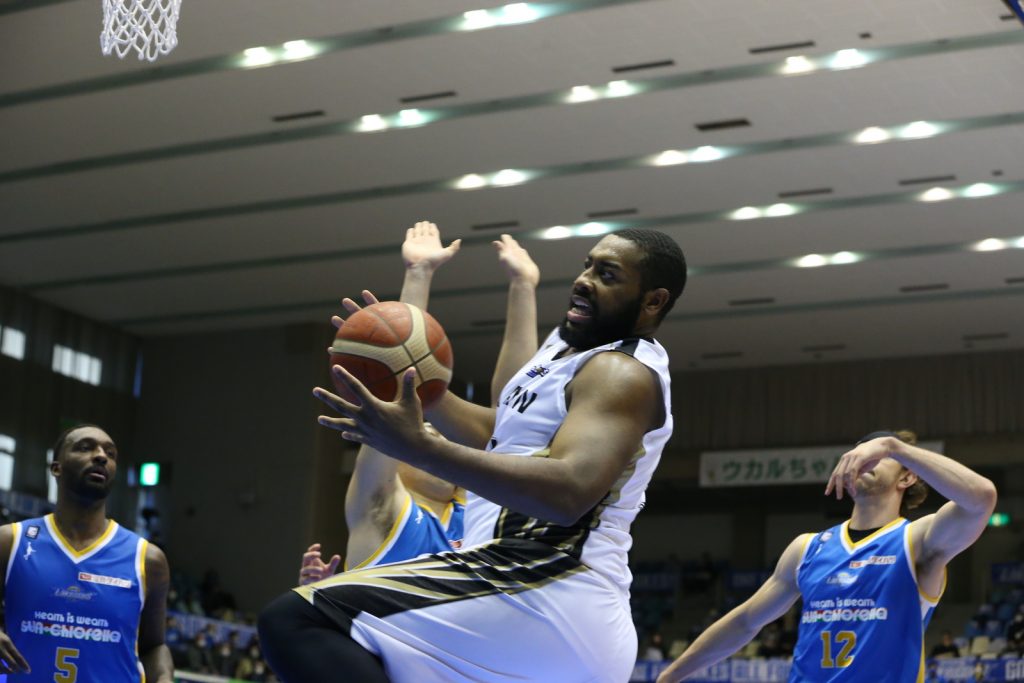 After an atypical 18-23 record in the COVID-19-shortened 2019-20 season, the SeaHorses have returned to their winning ways.

It started with a dominant performance over the season's first two months while playing a schedule heavy on road games so far. 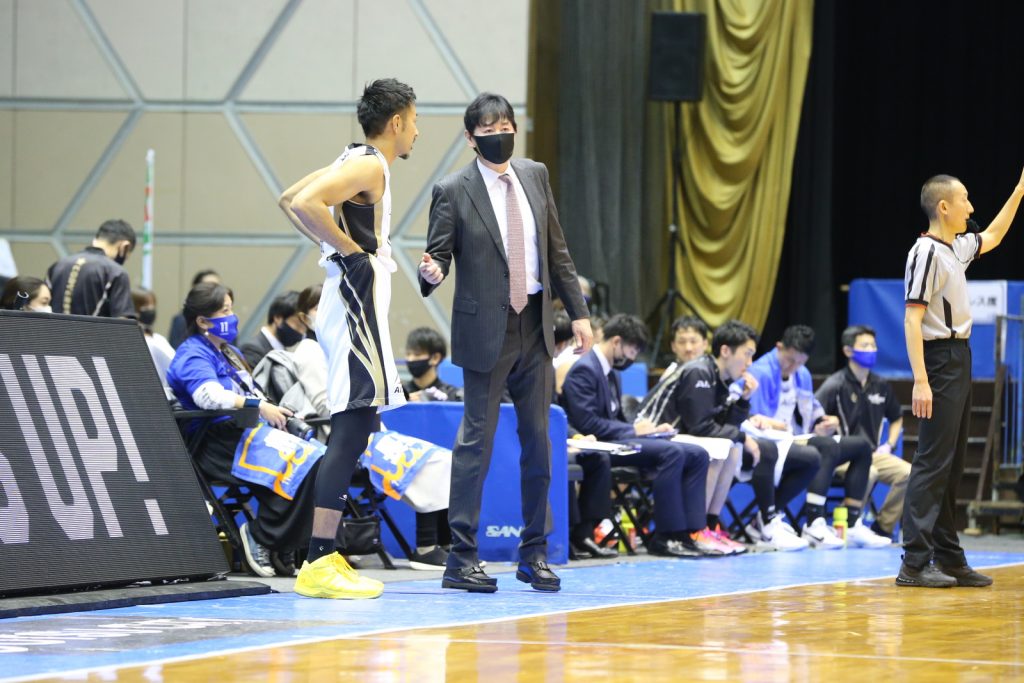 Suzuki credited Shiga for playing with "good defensive energy in the first half," which he said made it difficult for his team to run its offense.

In the third quarter, Suzuki added, the SeaHorses defense did a good job of slowing down their opponent's offense, limiting ball movement.

Mikawa opened the series with a 96-81 triumph over Shiga on Saturday, December 5.

Balanced scoring helped propel the SeaHorses to victory. Avi Koki Schafer put 20 points on the board, making 9 of 11 shots. Gardner matched Schafer's scoring total and hauled in 12 rebounds. Kanamaru poured in 16 points and Takuya Kawamura added 15, knocking down 3 of 5 3s. Shiga's Hamilton had a team-high 20 points.

Mikawa buried 12 of 25 3-point shots while its offensive clicked with precision passing and smart ball-handling decisions. The SeaHorses finished with 30 assists against seven turnovers.

The B. League regular season resumed on Wednesday, December 2 after a two-week break, which was originally planned due to the Japan national team's scheduled FIBA Asia Cup qualifiers. Those games, however, were called off due to the COVID-19 pandemic. Other Asian nations, however, competed in Bahrain. 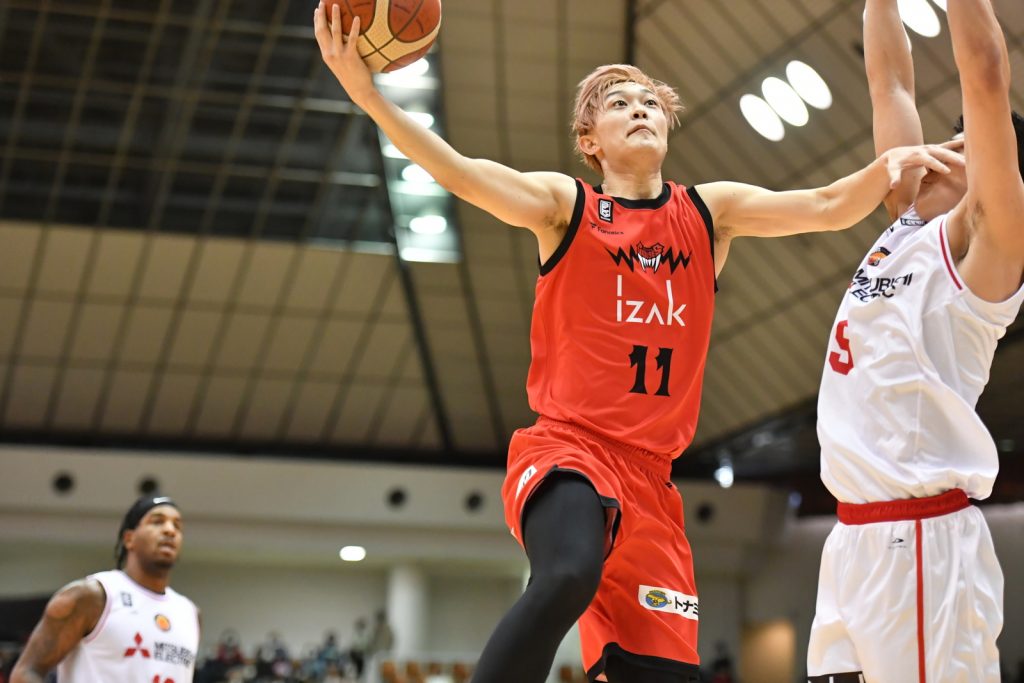 In Kurobe, Toyama Prefecture, the hosts avenged a series-opening defeat to end the weekend on a winning note. 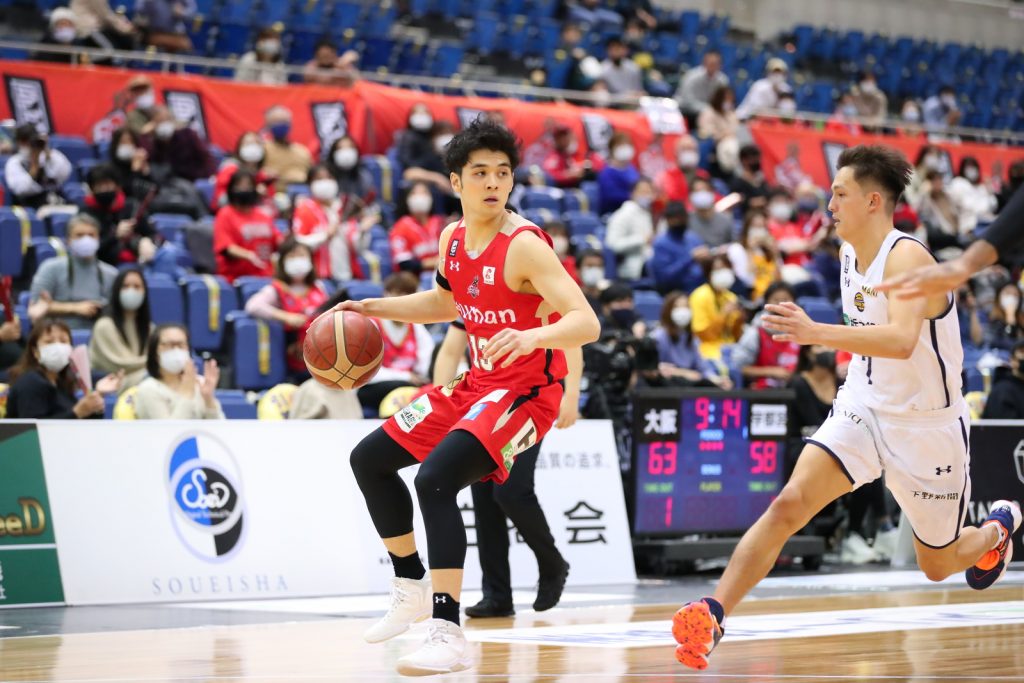 In Osaka, D.J. Newbill capitalized on repeated trips to the free-throw line and had a banner offensive performance in Evessa's bounce-back victory over Utsunomiya.

Newbill had a game-best 26 points, making 4 of 7 3-pointers and connecting on 12 of 15 free-throw attempts. He also doled out eight assists. Teammate Ira Brown had a productive outing, too, with 18 points, seven rebounds, four steals and four blocks.

Osaka (8-10), which suffered a 94-69 loss on Saturday, had five players score in double figures, and 23-year-old point guard Hiromu Nakamura energized his club with a nine-point, four-assist, three-steal effort. It was Nakamura's third straight start after coming off the bench in his first seven games of the season.

Utsunomiya, which prides itself on a balanced inside-outside scoring attack, missed 21 of 26 3s. 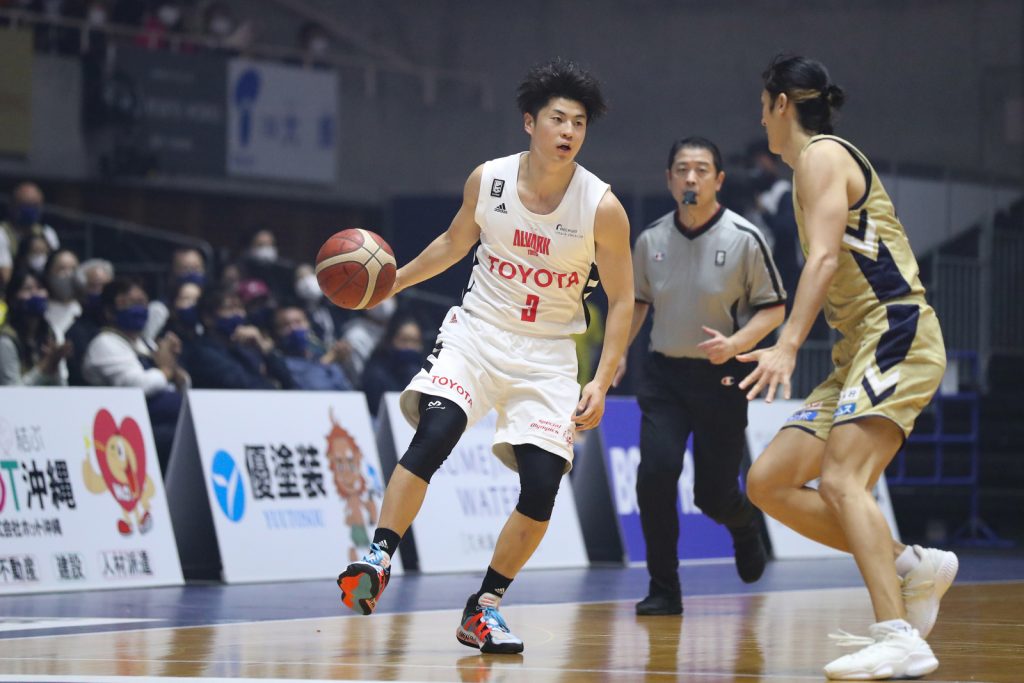 In Okinawa City, Tokyo rebounded from a series-opening defeat to produce a headline-grabbing rout of Ryukyu.

Kevin Jones sparked the Alvark with 21 points and snared 11 rebounds to complete the double-double, while reigning B. League MVP Daiki Tanaka had 15 points. Deshaun Thomas provided 13 and Alex Kirk scored 10. Steady conductor Seiya Ando spearheaded Tokyo's fast-paced offense with five assists, and the visitors chalked up 25 assists with just 10 turnovers in the win.

In Kyoto, Washington State alum Josh Hawkinson excelled at both ends of the floor as Shinshu salvaged a series split, scoring a game-high 33 points and grabbing 23 rebounds.

Hawkinson was the lone double-digit scorer for the Brave Warriors (7-11), who fell 69-66 a day earlier.

The B-Corsairs (5-13), who outscored the hosts 51-32 in the second half, also received a boost from Kenta Morii, Masaaki Morikawa and Carter, all of whom had six assists.

For the NeoPhoenix (4-14), Hayato Kawashima and Stevan Jeovac both scored 18 points.

Yokohama opened the weekend with a 79-68 win.

Dynamic Filipino guard Thirdy Ravena, who made his debut for San-en on November 7, didn't play in the series after recently testing positive for COVID-19.

"All good over here," Ravena tweeted on November 28. "Appreciate all the love and concern over the past 24 hours. I feel well already but have to follow quarantine protocols indefinitely. Just a reminder that the virus is still out there so let’s not take it for granted. Stay safe everyone! Much love."

In Funabashi, Chiba Prefecture, the hosts outclassed Shimane in the third quarter to seal the victory and earn their second weekend triumph.

The Jets put 31 points on the board in the third and held the visitors to 16 to take a 72-50 advantage into the final quarter.

The Jets recorded a 92-83 win in the series opener.

In Noshiro, Akita Prefecture, the hosts' pesky defense played a pivotal role in their second win in as many days over Hiroshima.

Five Northern Happinets players had two steals, a sign of the team's overall commitment to defense.

Alex Davis scored 18 points and hauled in 10 rebounds, and Takatoshi Furukawa followed with 16 points. Kadeem Coleby had 13 points, and 22-year-old guard Sota Oura chipped in with 12 for his third straight double-digit scoring game for Akita (10-8).

Thomas Kennedy was the top scorer (23 points) for the Dragonflies. Hiroshima (4-14) lost its fifth in a row.

The Northern Happinets clobbered the visitors 95-73 in the opener.

In Tokyo, former Los Angeles Lakers forward Ryan Kelly put his stamp on the game with a splendid shooting effort to lead Shibuya past Niigata for the second straight day.

Kelly, who led all players with 31 points, made 12 of 16 shots. He also supplied six rebounds, five assists, three steals and a blocked shot for the Sunrockers (11-7). Teammate Charles Jackson had 19 points on 8-for-9 shooting, while Kaito Morizane finished with a season-high 12 points.

In the weekend opener, Shibuya collected an 85-67 win.