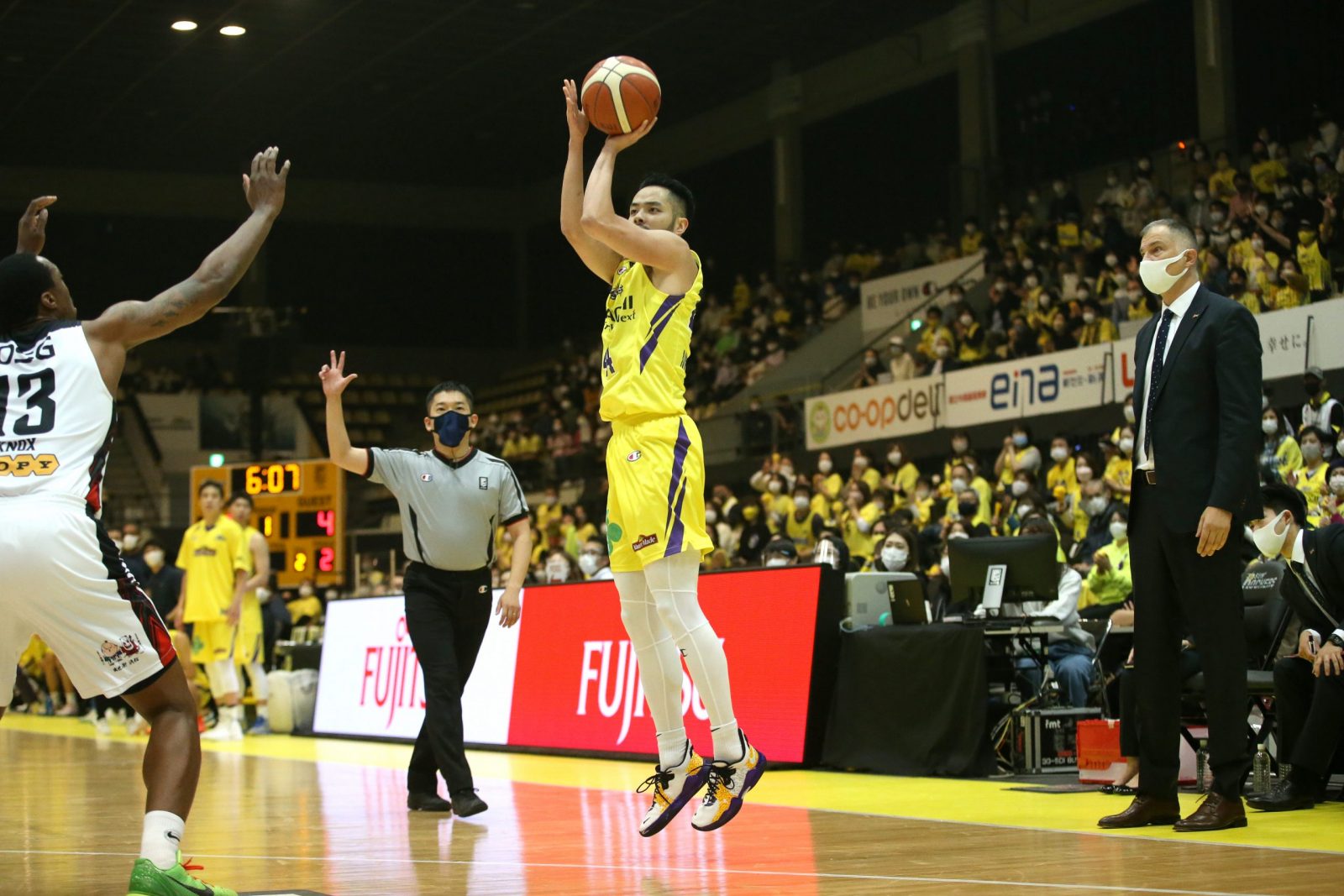 The fourth-year pro capitalized on the opportunity with an impactful, season-high 18 points on 6-for-7 shooting (all 3-point attempts), seven assists and two steals in the Sunrockers’ 91-80 victory over the visiting San-en NeoPhoenix at Aoyama Gakuin University Memorial Hall.

Entering the 2021-22 B. League campaign, which got underway in early October, Morizane had appeared in 90 Sunrockers games and made just four starts (all in 2020-21) over the three previous seasons.

“I’ve had a lot of unsatisfactory play until now when I was asked to score, but I want to continue to play like today,” the 24-year-old Morizane said in a postgame news conference. 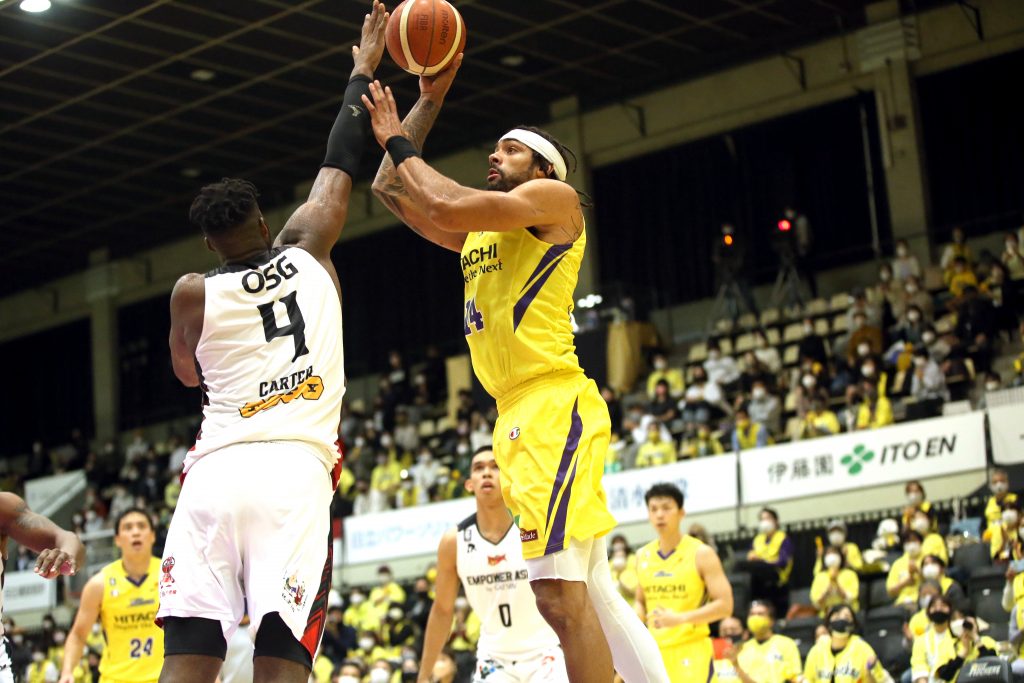 The Sunrockers’ James Michael McAdoo shoots a jumper in the fourth quarter. (B. LEAGUE)

The Sunrockers opened the weekend series with a 70-64 victory over San-en on Saturday, November 6.

Inserting Morizane into the lineup the next day produced immediate results. He was one of five Shibuya players to score three or more points, and Sunrockers head coach Tsutomu Isa’s team took a 23-11 lead into the second quarter. Morizane, a left-handed shooter, was 1-for-1 from beyond the arc and dished out two assists) in the opening quarter.

Koyo Takahashi and Josh Harrellson paced the hosts with six and five points, respectively in the first period.

Replicating their success in the early going, Shibuya closed out the game by outsourcing San-en 27-16 in the fourth quarter, with Harrellson (nine points) and Morizane (six) pacing the offense over the final 10 minutes. 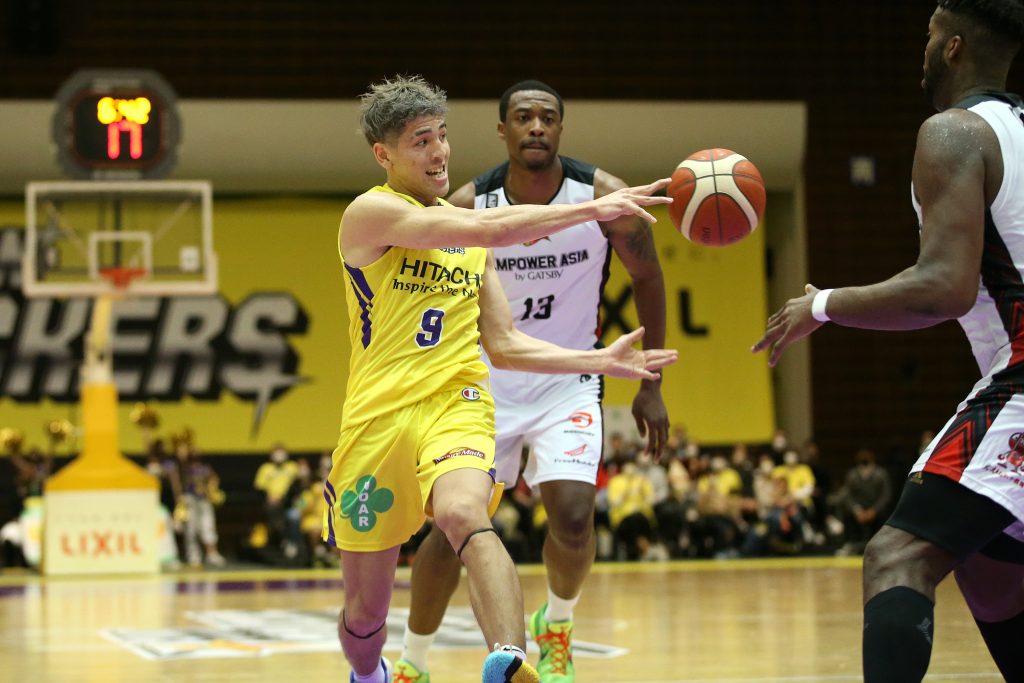 Sunrockers guard Leo Vendrame passes the ball to a teammate. (B. LEAGUE)

Hisatake said he was focused on chasing after loose balls.

“I was conscious of going to get all the rebounds,” Hisatake told reporters after his high-energy performance. 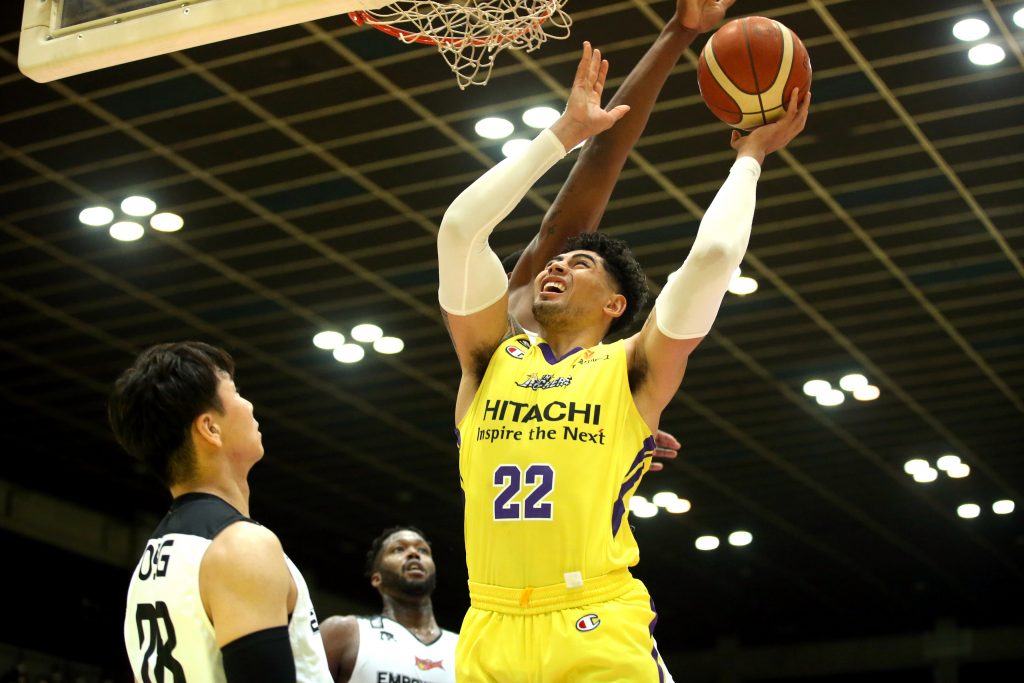 Shibuya forward Max Hisatake controls the ball in front of the basket. (B. LEAGUE)

Isa noted that Morizane’s perimeter shooting skills were on display throughout the game.

“I think that if a bullish play like that comes out from today’s game, it will have a better effect on the team,” Isa said of Morizane’s aggressive 3-point shooting.

Morizane’s excellent long-range shooting was, in fact, a team-wide performance. The Sunrockers made 15 of 28 3-point attempts.

For the NeoPhoenix (3-8), Robert Carter was the high scorer with 20 points. Justin Knox added 18, ex-Sunrocker Yusei Sugiura poured in 14 and Thirdy Ravena had 13. 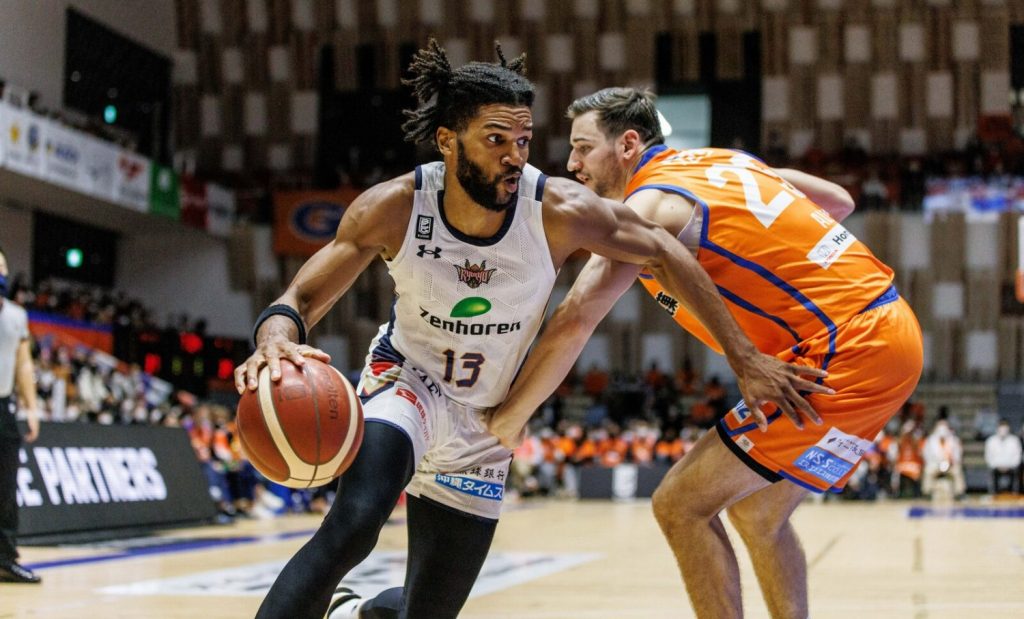 Ryukyu’s Dwayne Evans drives to the basket against Niigata on November 7. (B. League)

Golden Kings Setting the Pace in the West

The Golden Kings (9-2) are in first place in the 11-team West Division.

Dwayne Evans played a key role in the win, contributing 23 points on 8-for-11 shooting, seven rebounds and six assists.

It was far from a one-man effort for the Golden Kings.

Ryukyu chalked up 16 assists against five turnovers. Niigata (2-9) had 15 assists and 19 turnovers.

The Albirex lost their eighth in a row. 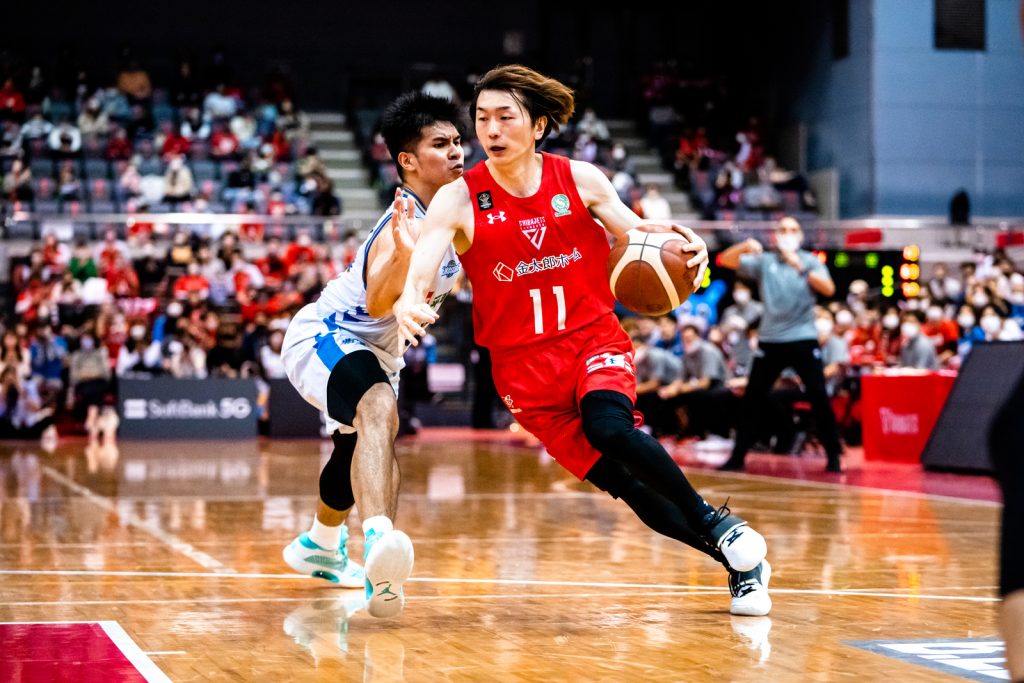 Chiba Jets guard Fumio Nishimura runs the offense in the fourth quarter against the Shiga Lakestars on November 7. (B. LEAGUE)

Crowded Atop the East

Josh Duncan scored a team-high 18 points as the Chiba Jets defeated the visiting Shiga Lakestars for the second consecutive day on Sunday, winning 89-83.

Backup point guard Fumio Nishimura chipped in with 16 points and five assists, John Mooney had 15 points and Gavin Edwards supplied 12 points, 10 rebounds and five assists. Star guard Yuki Togashi was held scoreless (0-for-3 from the floor) in about 28 minutes of court time.

In Tachikawa, the Alvark Tokyo built a commanding lead entering the final quarter en route to an 84-57 victory over the Kyoto Hannaryz.

The Hannaryz (2-9), who have dropped their last eight contests, trailed by 27 points after three quarters. Jerome Tillman led Kyoto with 17 points. 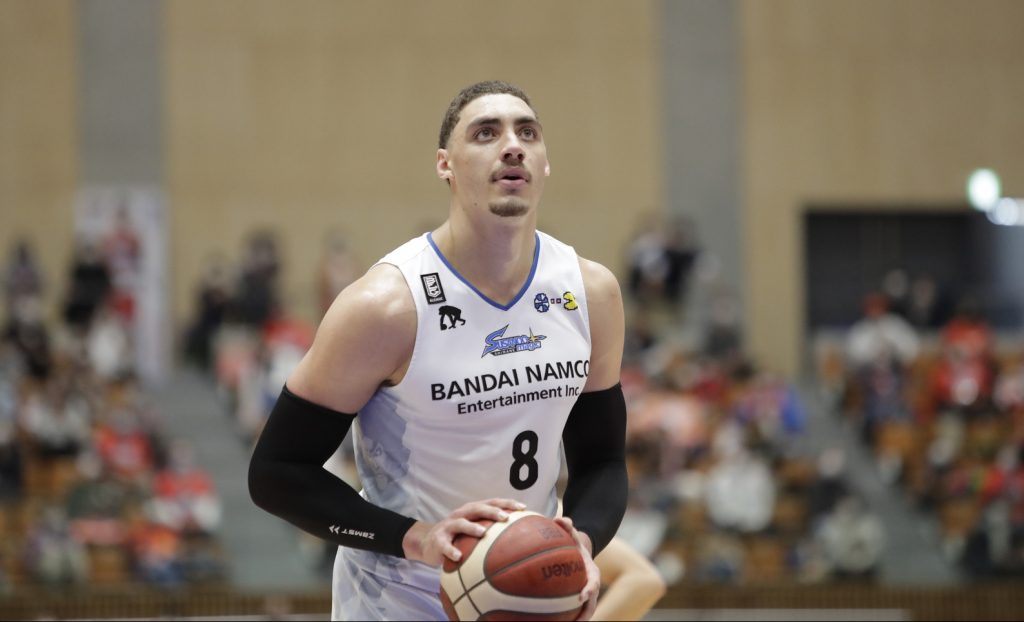 Kay, who played all 45 minutes, also had eight rebounds and nine assists.

Levanga Hokkaido players salute the team’s fans after their victory over the Utsunomiya Brex on November 7. (B. LEAGUE)

In Obihiro, Hokkaido Prefecture, strong rebounding and effective inside scoring were key factors in the Levanga Hokkaido’s bounce-back, 71-63 victory over the Utsunomiya Brex on Sunday.

Shawn Long and De’Mon Brooks each had 21 points for the Levanga, with Long grabbing 14 rebounds to complete the double-double. Guard Ryoma Hashimoto scored 12 points.

For Utsunomiya (6-5), Josh Scott had 21 points and 13 rebounds and Makoto Hiejima added 19 points.

Elsewhere Sunday, the Ibaraki Robots defeated the Osaka Evessa 81-72. Marc Trasolini (22 points) and Eric Jacobsen (15) were the top scorers for the visiting Robots (2-9).

In other weekend finales, the Yokohama B-Corsairs topped the visiting SeaHorses Mikawa 79-67 and the Nagoya Diamond Dolphins triumphed 100-90 over the Gunma Crane Thunders. Both winners earned splits in their two-game series.