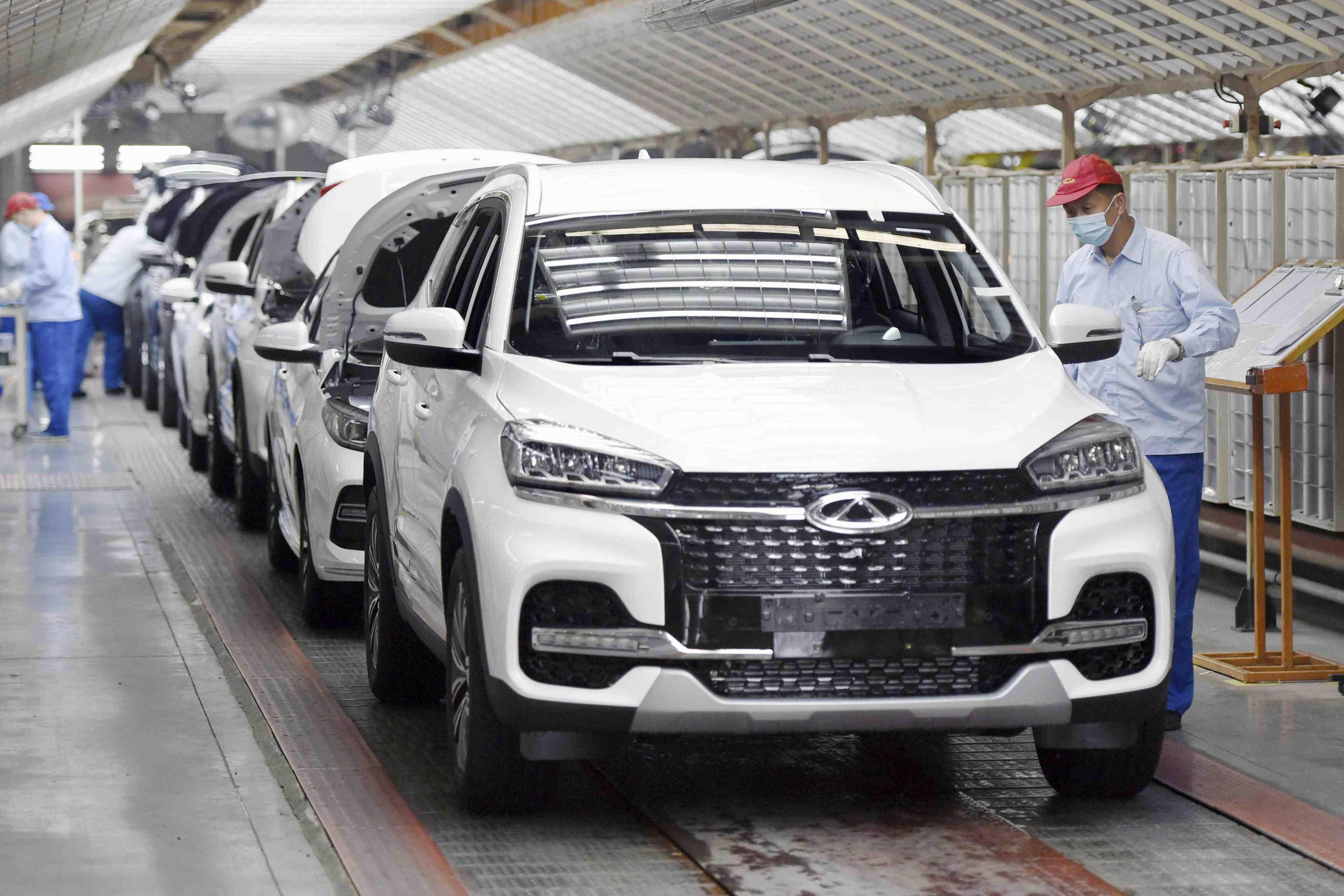 Although China may lack power in the global arena amid the COVID-19 pandemic, its economic growth is quickly getting back on track.

The Xi Jinping regime’s determination to revive China’s economic expansion to the height of the post-Lehman collapse — the unprecedented financial crisis in September 2008 — is achingly clear. Beijing’s sweeping authoritarian rule over Hong Kong through its new national security law for the semi-autonomous region is part of the scheme.

Once and for all, Japan needs to break free from the illusion of the ”new era” of China-Japan relations.

The graph indicates data for manufacturing productivity and trade in China after March 2020, when the coronavirus outbreak that began in Wuhan had abated in China and spread to other regions of the world. It also shows shifts in the SSE Index (Shanghai Stock Exchange), Shanghai’s main stock market index. 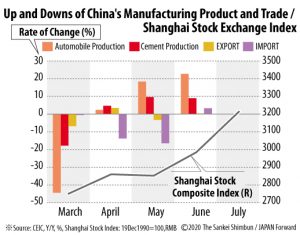 China’s automobile production, which symbolizes its role as the factory of the world, is recovering with speed. The cement production trend, reflecting the country’s fixed assets investment taking up around half of China’s GDP, is showing positive recovery in condominium building constructions.

Chinese exports remain at the same level as the previous year despite the struggling global economy amid stagnation brought about by the pandemic. Imports rose in June with strong domestic demands.

Stock prices will be discussed later, but they have soared as a result of the leverage plan with the Hong Kong market serving as a medium.

On July 16, it was announced that China’s GDP growth bounced back for the first time in six months, expanding by 3.2% year-on-year during the three months of April to June. Because of long standing suspicion of GDP manipulation in China, the figures cannot be taken at face value. However, considering the previously mentioned production index, the data doesn’t seem too off.

There are concerns. One is the increase of the potentially unemployed. Migrant workers in cities who have gone home to rural regions amid the coronavirus pandemic are not included in the unemployment count.

Some 600 million people, more than 40% of the Chinese population, still only earn a monthly income of barely 1,000 RMB (around ¥15,000 JPY), Chinese Premier Li Keqiang said in May. Most of these low-income people are migrant farmers.

Li also pointed out that government support for street vendors serving food such as grilled meat is an important measure to consider. Street stalls, which were once popular features of cities across China, have recently been banned. Li’s remarks were criticized by the national media and his recommendations were not carried out. However, the severity of the country’s unemployment issue was unintentionally exposed.

Another concern lies in the problem of foreign currency. Substantially, China’s currency system is based on the dollar standard, and the central government’s People’s Bank of China (PBC) issues the Chinese yuan (RMB) according to the amount of foreign currency inflow — that is, the United States dollar.

When the Lehman crisis hit, China held foreign currency assets that far exceeded the dollar value of its outstanding RMB issuance. PBC used those assets as collateral to issue vast amounts of Chinese yuan and supplied them to state-owned banks. Then the banks all at once extended loans to various industries, local governments, and consumers. With sufficient financial backing at the time, Beijing launched a large-scale fiscal policy.

However, in 2015, foreign currency, on a per yuan balance basis, accounted for less than 100% of PBC’s total assets. It dropped to less than 70% in 2017, a condition that has continued to the present.

As a result, the bank’s ability to expand financial volume in response to the coronavirus recession has been limited, and the government’s own fiscal policy has also been extremely meager. 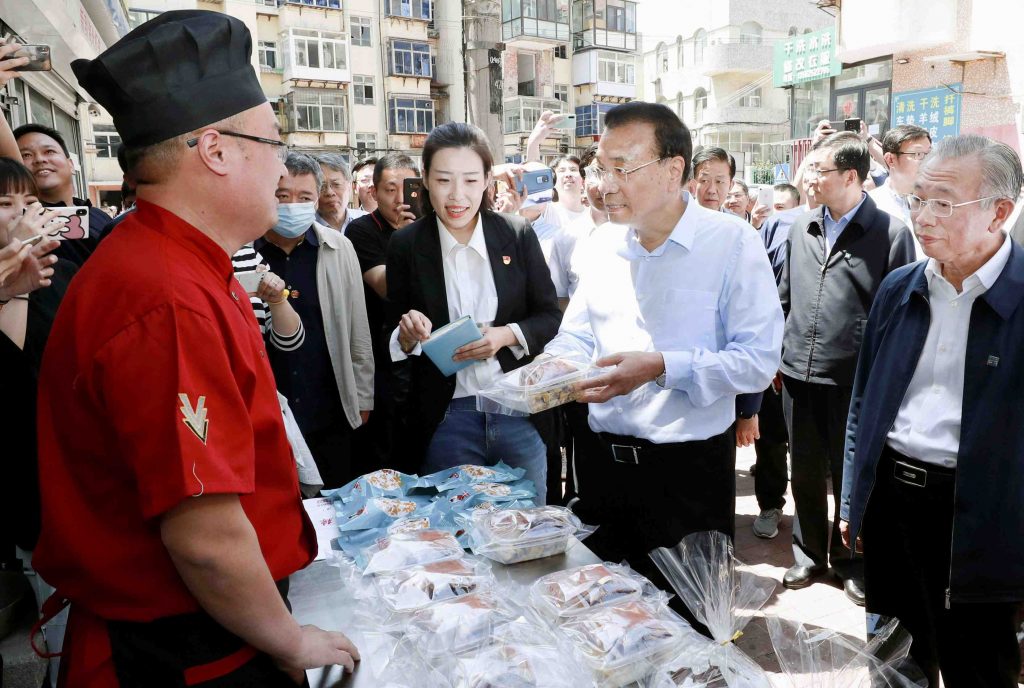 Authoritarianism at the Root of China’s Financial Stress

Capital flight has been the main cause of China’s decline in foreign reserves. In the summer of 2015, the yuan was devalued against the U.S. dollar. This was followed by a downturn in the real estate market. Finally, in the summer of 2018, the U.S.-China trade war broke out.

The Xi administration tried to stop capital flight by cracking down on the illegal gains by Chinese Communist Party leaders. Vast amounts of wealth, which were illegally made by senior party members and their families, were converted to foreign currencies and smuggled out of China. Hong Kong was the financial hub for their escape.

The new security law deprives Hong Kong of political freedom, as well as the right to freedom of expression. It will strengthen surveillance in order to block the route for capital flight. But, China says, profit-making freedom in the Hong Kong market will remain as is.

This is typical totalitarianism. The dictatorial government will leech off the avarice of the capitalist economy, and totalitarianism will take over Hong Kong.

At the end of June, Chinese companies accounted for 78% of the Hong Kong stock market capitalization, as mainland investors invested RMB in Hong Kong-based Chinese corporate stocks and boosted the market rate. This allowed for huge trading profits. Meanwhile, Shanghai shares will likely see a rise as a result of cash flowing back from Hong Kong to the Shanghai stock market.

This is how the Xi administration will try to attract foreign capital to mainland China and Hong Kong, and is the very formula for China’s economic expansion strategy funded by foreign currency.

U.S. Secretary of State Mike Pompeo stated that the U.S.-China conflict over the Xi administration’s repression of Hong Kong is an issue of “democracy vs. authoritarianism.” Against it, he called for unity in the Western world, including Japan.

The threat of Chinese territorial expansionism is also obvious, with the frequent incursions by Chinese vessels in waters around Japan, even during the pandemic.

If Japanese politics is influenced by greed, as evidenced in the expectations that money can be made just as before in China and Hong Kong in the growing post-coronavirus market, Japan will be completely devoured.

(Find access to the original column in Japanese here.)