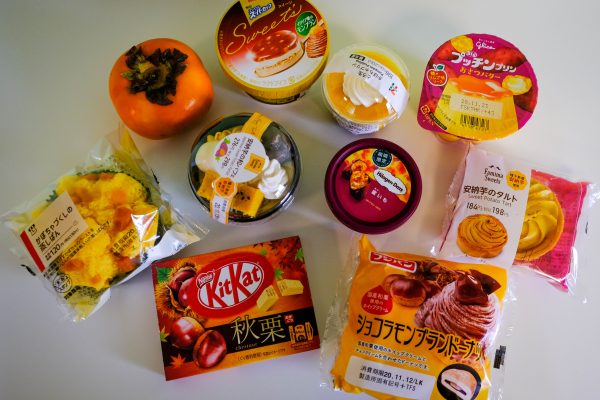 One thing that has consistently captivated and delighted me during my tenure here in Japan are the changing seasons. For the first time in my life, I’m actually living in a place with all four seasons, and Japanese culture takes particular care in marking and celebrating them. This year, it’s been a little hard to participate in the events and festivals that occur in the different seasons - but we will always have the food.

Autumn brings with it warm, cozy flavors of nuts and squash and root vegetables, and now these classic flavors can be found in all manner of innovative treats and snacks. Don’t worry, you don’t have to go too far to sample these delicacies, as most of them can be purchased at a convenience store near you. I scoured every Lawson, 7-eleven, and Family Mart in my area to try as many as possible and report my findings back to you. Journalism can be so taxing sometimes! 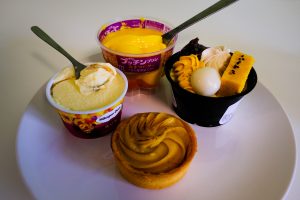 Of all the different fall flavors, the one that I found in the most abundance was sweet potato. Japanese sweet potatoes are a gift from the gods. Purple on the outside, and orange, yellow, or sometimes also purple on the inside, they are naturally sweet, and vary in softness and stickiness. The classic way to eat them is yaki imo, a whole, roasted sweet potato that is slowly cooked over hot stones. This retro snack pops up everywhere in the fall, from convenience stores, (called affectionately conbinis) to grocery stores to Don Quixote, but the best are always sold out of the back of a truck and usually served by a little old man or lady.

Although yaki imo by itself already is a lovely snack, this flavor has been incorporated into a myriad of treats. I was frankly overwhelmed by the sheer amount of options that came in sweet potato flavor, and selected four to try: Big Pudding by Glico, Mitsu Imo ice cream by Haagen-Dazs, and both a sweet potato tart and a sweet potato parfait by the Famima Sweets label from Family Mart. Although it didn’t look too fancy, the Big Pudding was nice, but I found the consistency to be thin and the flavor to be more artificial. The Mitsu Imo ice cream was the definite star of this category, with a creamy and smooth consistency, and a strong but pleasant sweet potato flavor. To me, it really captured the taste of eating a delicious yaki imo in ice cream form!

The Famima Sweets items were surprising. I really liked the sweet potato tart. The crust was flaky and buttery, and the sweet potato filling was creamy and flavorful without being too sweet. The sweet potato parfait was interesting. This confection consisted of pudding topped with Japanese sweets toppings like red bean and mochi, with a swirl of sweet potato cream and a swirl of whipped cream. While I thought this had the best presentation of any of the items I tried, I would have liked less toppings and more sweet potato flavor from this one. 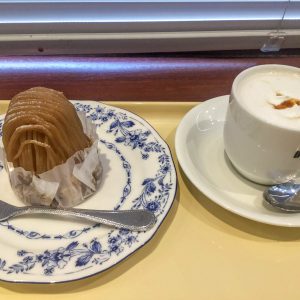 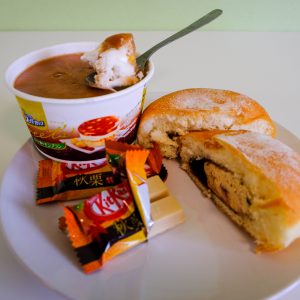 Another exceptionally popular autumn flavor is chestnut. While chestnuts can be eaten roasted or mixed into savory dishes, you will most likely see this flavor in the guise of Mont Blanc, a European dessert that consists of piles of thinly-piped sweetened chestnut puree and fluffy clouds of whipped cream. For this flavor, I selected a Mont Blanc ice cream from Meiji Sweets, a Mont Blanc donut from Seiyu, and the seasonal chestnut Kit Kat.

While Mont Blanc is exceedingly popular here in Japan, I had never actually tried it before, so first I tried the Mont Blanc dessert at Doutor, a coffee shop, to get an idea. It wasn’t bad, and I enjoyed how light and airy it was, with a subtle chestnut flavor. However, I found it a bit too sweet for my taste, and the wafer that the cream sat on was reminiscent of cardboard.

The Mont Blanc ice cream however, I enjoyed quite a bit. It had nice layers, with small chunks of chestnut nestled amongst the cream that mimicked the flavor of the original dessert well. When it came to the Mont Blanc donut though, I didn’t think that it tasted like chestnut or Mont Blanc at all, just fried dough and cream. The Kit Kats were nice, but here again, I didn’t really taste any chestnut, just white chocolate. Overall, I was surprised by how subtle the chestnut flavored sweets were in comparison to the others. 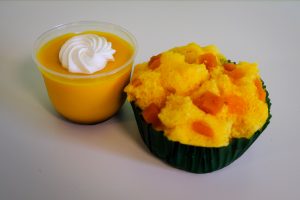 Pumpkin is one of my favorite flavors. Kabocha, or Japanese pumpkin, is a food that can be found throughout the year, but it really gets a chance to shine in autumn. Westerners who are used to big orange pumpkins may be surprised by the green-skinned, yellow kabocha, closely resembling a squash.

I did not see pumpkin snacks in quite the same quantity as the other flavors, but still managed to scrounge up two to taste: a steamed pumpkin bread from the convenience store Lawson and a pumpkin pudding from 7-eleven. The pumpkin bread had a nice, squishy texture with sizeable pumpkin chunks, but overall tasted a bit bland. I didn’t mind it, but I probably wouldn’t buy it again.

The overall best treat on this list is the one I’ve saved for last: the 7-eleven pumpkin pudding. I could go on and on about how good this was. A lot of puddings in Japan have a thin, watery texture, but not this gorgeous confection. The consistency is hearty, more like a pumpkin puree, and isn’t too sweet, so the flavor of the pumpkin can really shine. A little bit of sweetness comes through with a little flan-style caramel sauce on the bottom and a perfect swirl of whipped cream on the top. It’s pure pumpkin perfection, all for just ¥200.

Which brings me to the end of this review! With nearly endless options, I know that there are surely some delicacies that I’ve missed, but hopefully I was able to do some of the heavy lifting for you. So get to your nearest conbini, and treat yourself to some of the best that autumn has to offer!