BOOK REVIEW | ‘Claws of the Panda: Beijing’s Campaign of Influence and Intimidation in Canada’ by Jonathan Manthorpe 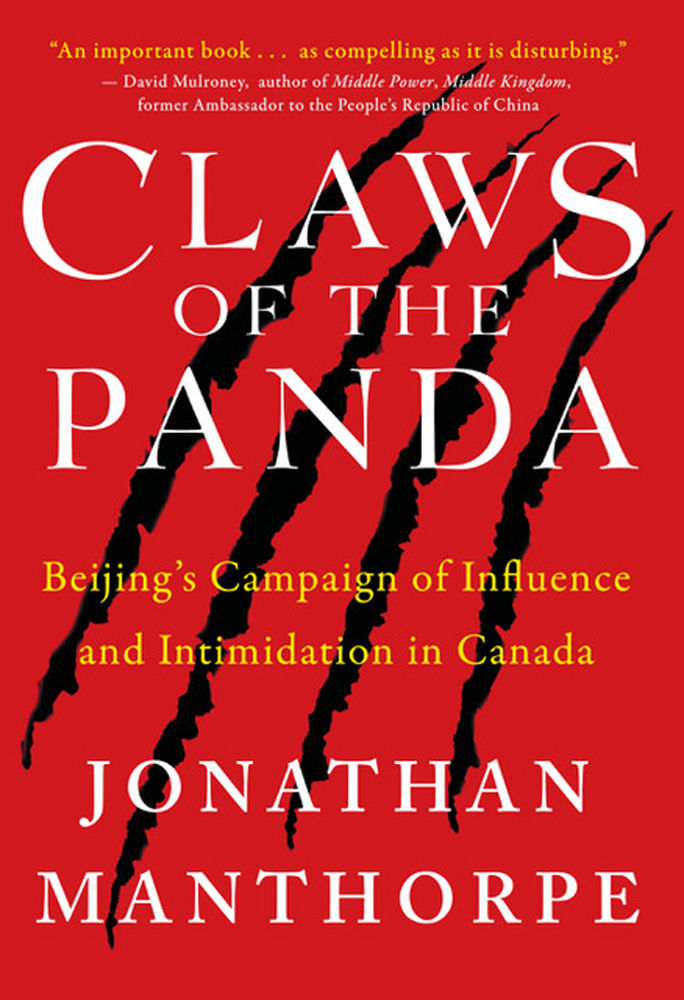 Author Jonathan Manthorpe, a Canadian citizen with decades of residence in Asia as a foreign correspondent, has chosen his title well. Despite its cuddly appearance, the panda has sharp claws that can cause grievous harm.

This was not evident when the two countries first discovered each other. In the 1880s, some 17,000 Chinese, mainly Cantonese speakers from the Pearl River Delta of Guangdong province, came to Canada’s British Columbia in search of gold, creating Canada’s first Chinese community, Barkerville. A few years later, another 15,000 arrived to work as laborers on the British Columbia (BC) segment of the Canadian Pacific Railway.

Chinese were helping to build Canada. However, alarmed by the size of the influx, authorities passed restrictive laws that did not end until after World War II, during which hundreds of young Chinese affirmed their loyalty to their new home by volunteering for the armed forces. But not until 1948 did Chinese gain the right to Canadian citizenship.

At the same time, some Canadians were discovering China in quite a different way.

Hundreds of Christian missionaries went off to the Chinese hinterland to save souls. Activism for social improvement was part of their religious faith. The missionaries and their progeny, the “Mish kids,” were instrumental in shaping public opinion toward early recognition of the People’s Republic of China (PRC). Though Manthorpe does not mention it, they were apparently not bothered by the Chinese Communist Party’s militant atheism nor by the fact that missionaries who stayed behind after the CCP assumed power in 1949 were incarcerated and badly treated.

American opposition and the advent of the Korean War in 1950 postponed thoughts of recognition for some time.

Rationalizing Tragedy with Dreams of Trade

Ironically, it was the terrible tragedy of Mao Zedong’s disastrous Great Leap Forward that made China seem attractive again. When his ill-conceived policies resulted in millions of deaths — estimates range from eight million to Manthorpe’s figure of 40 million — Ottawa became aware that there was a major market for Canadian wheat. So eager were they to sell, even though China did not then have enough hard currency to pay for the wheat, that they agreed to loan China the money on the rather shaky logic that, with its thousands of years of civilization, China was a trustworthy bet (p. 86).

Meanwhile, a Chinese Canadian named Paul Lin, with connections to the highest echelons of the CCP, assumed an intermediary role in explaining China to Canadians.

This reviewer, resident in British Columbia, at the time vividly remembers Lin rationalizing the terrible events of the Great Proletarian Cultural Revolution with the metaphor of China as a train, rushing full speed ahead but in the wrong direction. Hence, Mao was forced to seize the train to turn it around again. Your reviewer argued that what Mao had done was derail the engine, but incredibly people seemed to believe Lin.

In 1970, with the Cultural Revolution proceeding, albeit in less violent form, Prime Minister Pierre Trudeau consummated formal diplomatic recognition with the PRC. His reasoning, and that of many others, was that “a China open to the world would be subject to the same diplomatic persuasion as other countries, and could be expected over time to adjust its political, economic, and social practices to bring them into harmony with international norms” (p. 101).

As Manthorpe points out, it soon became apparent that Ottawa and Beijing had very different expectations for the relationship.

For China, it opened a door to the future. Mao and Premier Zhou Enlai’s judgment that Canada was the best candidate among Western countries to seek diplomatic relations with — a “soft target” that would ease the way for normal relations with other comparable states — proved spot-on.

For Canada, the establishment of diplomatic relations was a window for missionary nostalgia — a Canadian Camelot that did not work out as planned. When the goals of Canada’s moral duty to push the CCP toward political and social reform and improvements of its human rights record did arise, they were usually answered from a business perspective. As China’s economy grew through trade, a middle class would be created that in time would demand a representative government and all the civil rights flowing from the rule of law.

Paul Lin was instrumental in founding the Canada China Business Council. Among other activities, he introduced the founder of BC’s Power Corporation, Paul Desmarais, to officials of the huge state-owned China International Trust Investment Corporation. Desmarais offered to sell CITIC a 50% share in a Power Corporation paper mill, and events proceeded rapidly from there.

In addition to being a successful businessman, Desmarais was an adviser to then-Prime Minister Pierre Trudeau. After leaving politics, Trudeau served as adviser to Power Corporation.

Lin introduced Desmarais to Li Peng, whom many Chinese regard as one of the PRC’s more corrupt officials. Li, later known as the Butcher of Beijing for his role in the Tiananmen Massacre, donated a painting to Desmarais’ extensive art collection as a token of friendship.

The Bite of Chinese Corruption and Espionage

In the 1980s, the Canadian embassy in Beijing issued a warning about Chinese espionage in Canada as relations intensified. A welcoming immigration policy designed to attract investment capital — even though a study by the Canadian Economic Council said that there was plenty of investment money available in Canada so there was no need to go hunting offshore — immediately became perverted.

Corrupt elements used it as a conduit to move in illegally-obtained money; false documents could be purchased to ease the path to citizenship. One of the leading perpetrators, out on bail after being charged with 50 immigration offenses, was found dead in a hotel room in 1991 (p. 143).

In 1997, a secret report on Chinese influence jointly compiled by the Canadian Security Intelligence Service (CSIS) and Royal Canadian Mounted Police (RCMP) was leaked to the press, creating shock waves. Called Sidewinder, it stated, inter alia, that the Chinese Intelligence Service (ChIS) was making “very active use” of its access to Canadian industries through exchanges of specialists and students, and had set up shell companies to pursue acquisition of economic and technological intelligence.

Over 200 Canadian companies in all sectors of society, from banking to real estate and high-tech, had come under Chinese influence or ownership since the early 1980s through triads (mafia-like secret societies), tycoons who owed the CCP favors, and state-owned corporations. In addition to rendering assistance to ChIs, the triads used the companies to pursue criminal activities, such as money laundering and heroin trafficking.

China’s Bid to Control the Message

These and similar charges were countered with accusations that they were motivated by racism. And whistleblowers were apt to find their careers hurt by making the charge.

The Chinese government also intensified efforts to, in Manthorpe’s phrase, control the message. Chinese-language newspapers were either bought or founded anew to spread the CCP’s message. Journalists who resisted were fired.

Canadian politicians often bowed to Chinese government wishes to exclude New Dynasty TV and Epoch Times personnel from access to China-related events. Both are associated with the Falungong, a religion banned in China as a dangerous cult, lack of evidence notwithstanding.

Canadian educational institutions have also come under Chinese influence, having become at least partially dependent on them for tuition revenue and subsidies for teaching such as those rendered through Confucius Institutes.

The Canadian government seemed to have reached the limits of its toleration when, in 2012, the Calgary-based oil and gas company Nexen announced it was being taken over by the China National Offshore Oil Corporation. This gave CNOOC, an arm of the CCP, ownership of Nexen’s assets in the North Sea, Gulf of Mexico, West Africa, and the Middle East, as well as billions of barrels of reserves in the Alberta oil sands.

The government eventually approved the deal, but announced it would not henceforth allow state-controlled companies from any country to take any further majority stakes in the oil sands. (p. 215). However, two years later, a new prime minister, after only a cursory security analysis had been conducted, approved the sale of BC-based Norsat International to Hytera Communications of Shenzhen, in southern China.

Manthorpe also raises concerns about the influence of telecom giant Huawei, which have been corroborated by revelations attendant on the arrest of its CFO Meng Wanzhou. Their importance was further punctuated by the Chinese government’s subsequent retaliation against Canadian citizens in China as well as restrictions on the import of certain Canadian products.

Manthorpe argues that the CCP is riding roughshod over Canadian values and interfering in its internal affairs to a degree that sometimes amounts to a challenge to Canadian sovereignty.

Whether recent concerns will result in sustained wariness or be a temporary blip in Canada’s absorption into the Chinese sphere of influence cannot be predicted. As Manthorpe observes, his country’s intelligence services have been aware of the dangers for many years, while political officials have too often lacked concern — and still do.

The author ends on an optimistic vote: although the CCP is skilled in cultivating the venality of individuals, it misjudges the strengths of free and open societies.

Moreover, its social contract with the Chinese people has frayed to such an extent that the party’s concern with maintaining social stability has verged on the obsessive.

Although authoritarian states are able to present a seemingly impregnable facade to the world, sometimes, for a surprisingly long time, they are intrinsically brittle. A tap on the glass in the wrong place at the wrong time can leave nothing but a scattering of shards in the street.

Book: Claws of the Panda: Beijing’s Campaign of Influence and Intimidation in Canada