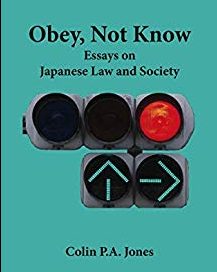 JAPAN Forward readers know Colin P.A. Jones as the Canadian lawyer and Doshisha professor who writes the monthly law column for the Japan Times. For this book, he has added a few new essays, and reprinted several years’ worth of columns in chronological order.

Jones is usually sarcastic, and almost always critical of the legal establishment. Some of these may reflect the genre: newspaper columns for Tokyo expatriates.

Life as an expat can be hard. Many rules are unfamiliar, some norms make no apparent sense, and social acceptance can seem maddeningly illusive. Readers trying to make their way in this world will appreciate the law professor who assures them that their frustration is not all their fault. They will breathe with relief when he tells them that the Japanese government does not follow a “well-defined set of rules” (p. 31) and that “it is sometimes hard to know what the law actually is” (p. 47). When he declares that “it is probably safer to assume that you do not have any right to be in Japan” (p. 174), half of his readers will turn to their spouse and sneer, “I told you so.”

Sarcastic to be sure, Jones can be witty. He includes helpful essays on a wide variety of subjects, from the general legal structure in Japan (essay 16), to the legal services industry (essay 18), to the large number of deserted houses (essay 37). But he is at his best when he explains the legal angle to the odd little corners of life that expats might otherwise find so puzzling.

For example, what should we make, he asks, of the NHK stickers next to so many front doors (essay 27)? Where did government organizations find their cloyingly cute animé mascots (essay 11)? What is that flower pin that lawyers wear on their lapels (and what happens when they drop the lapel for “cool biz”) (essay 34)?

When Jones is good, one can understand why the Japan Times kept him on.  Picture the Chuo line commuter holding the Times against the train ceiling at 9:15 A.M. Read Jones’ caustic essay on bureaucratic folly, and our commuter might be able to ignore the 13 different people pressing against him. With a legal regime that “requires candidates to drive around in trucks screaming their name because the law won’t let them do anything else,” asks Jones, “how can you not feel deranged?” (p. 190). With lines this good, our commuter might even be able ignore the sweat running down his side.

Jones knows a lot about some fields, and writes about them clearly. Of all the topics, he seems to write most knowledgeably on Japanese family law. He includes multiple essays about the family registry, about non-marital children, about child custody, about international divorces. Unfortunately, the monthly column format does not do his learning justice. Readers will find one essay on the subject in column 2. After several entirely unrelated chapters, they will find another in column 7. They will find still another in column 9, then 17, and so forth. The commuter returning at night to an estranged husband will not find this a sensible way to learn the law she wants to know.

How Much Discretion Do Japanese Bureaucrats Really Have?

In a theme that runs through the book, Jones complains about bureaucratic power and legal opacity. With career bureaucrats firmly in control, writes Jones, Japan is an “authoritarian state” (p. 30). The bureaucrats draft vague statutes giving themselves enormous discretion. And the elected politicians never intervene.

And yet, and yet, in Japan as in the United States, politicians answer to voters. Unless they supply the policies that the voters want, they lose their jobs. Jones obviously does not like the Liberal Democratic Party that Japanese voters keep returning to office. Yet, even LDP politicians face competitive elections. If voters decided another party could better supply the institutions they wanted, they would vote the LDP out of office. Given these constraints, it would be an odd LDP politician who told a bureaucrat to do as he pleased.

Much the same dynamic characterizes the relationship between politicians and bureaucrats in Japan. As the long-time ruling party in the Diet, the LDP runs the government. If it did not provide voters with the policies that they wanted, it would lose the next election. The bureaucrats know that the LDP faces these constraints, know that the LDP could tell them what to do, and know that it could punish them if they failed. Rather than face that fate, they provide the LDP with the portfolio of policies it (a party of politicians facing electoral constraints) rationally wants.

The same considerations explain the apparent vagueness to the law. The two U.S. parties have a barely tenuous hold on power. They may control the government now, but know they could lose it at the next election. Facing low odds of holding power long-term, they draft legislation that constrains government agents. They constrain the agents by statute, because the agents who ultimately implement the policy may answer to their political rivals.

By contrast, the LDP faces very low odds of losing power. Although it regularly faces honest, competitive elections (apportionment disputes notwithstanding), for most of the post-war period it has won those elections. As a result, if the LDP passes a statute now, it stands a good chance that the bureaucrats who eventually interpret that statute will continue to be bureaucrats who answer to the LDP. Because the LDP will probably be able to constrain those future bureaucrats as necessary, it has little need to constrain their discretion through statutes now.

Witty, yes, but this book is long. Wit that amuses for 15 minutes in a crowded Chuo line train can get tiresome in a 437-page book. Jones tells us (p. 190) that the LDP stays in power by manipulating electoral districts to over-represent “the votes of people old enough still to be basking in the almost imperceptible afterglow of the 1964 Tokyo Olympics.” They can do this because of the “Supreme Court-certified unconstitutional (but not unconstitutional) malapportionment that reliably delivers conservative votes in exchange for...perhaps a new community center...with Western-style toilets.”

Like many Canadians who have to spend their time with those of us from the U.S., Jones is proud to be Canadian. But what are we to make of his claim that the U.S. is “convicting and imprisoning more of its people than Stalin” (p. 169)? I suppose we are to ignore it and move on. And what about his statement on Japanese elections (p. 192)?

The desire to protect your sanity by looking away from the Cthulhian horror of Japan’s electoral system is perfectly understandable. That’s fine, because the abyss of Japanese governance doesn’t want you staring into it either, so a system that discourages thought or debate makes sense for everyone.

I suppose we are to ignore this too.

The book has its clever moments. But Jones could have used a friend willing to give him an honest reaction now and then.

Title: Obey, Not Know: Essays on Japanese Law and Society

To Purchase the Book: From the publisher’s website, here; or from Amazon, here.