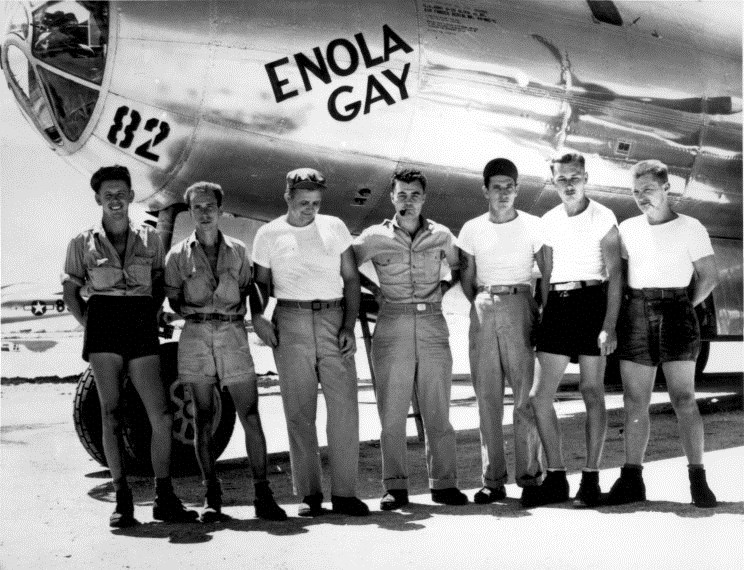 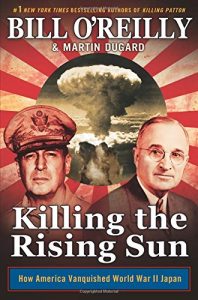 By Bill O’Reilly and Martin Dugard

In April 2017, disgraced former Fox News personality and self-styled “conservative” pundit Bill O’Reilly denounced as a war crime the use of chemical weapons in an attack on Syria. Just a year earlier, however, O’Reilly and co-author Martin Dugard published Killing the Rising Sun: How America Vanquished World War II Japan, a virtual encomium to the use of atomic weaponry against Japanese civilians in August of 1945.

How can the same person denounce the wholesale slaughter of innocent people in one part of the world, but applaud it 72 years earlier in another? What ideological razor is sharp enough to separate these two seemingly identical acts?

The answer is neo-conservatism, or the belief that the exercise of American power is right just because it is American. This ideological approach hobbles Killing the Rising Sun from the very first page, and ends up virtually eliminating its potential for analysis in exchange for the certainty of wars won long ago by the overwhelming display of American military might.

There are countless ways in which Killing the Rising Sun might have removed the ideological filter and let in the deep shades of historical nuance. Doing so, ironically, would have actually served to inure the authors against propaganda of other varieties.

On the issue of the comfort women, for example, the “two hundred thousand” comfort women said to have been “forced into sexual slavery”—a favorite “talking point” of Beijing—is unsupported by documentary evidence. (O’Reilly and Dugard thus find themselves in complete agreement with communist China—a very curious position for someone like O’Reilly who prides himself on seeing through governmental spin.)

American and Japanese academics have long sought to produce some form of written proof that kidnappings and sexual enslavement occurred on the scale claimed by Communist Party members in both China and Japan. The search has yielded nothing.

When the US government formed the Interagency Working Group (IWG) in order to hunt down records in the American archives validating the outlandish claims, it, too, came up empty, even after spending seven years and $30 million in the attempt.

While there were, in fact, isolated incidents of rape, kidnapping, and other forms of violent abuse against the comfort women, these were crimes punishable by imprisonment and execution.

A case in point is the Semarang Incident in Indonesia. During a breakdown of military discipline under one Major Okada around the Semarang area of central Java beginning in early 1944, some members of the Japanese military began impressing Dutch and mixed-race women held in POW camps into service as sex workers for Japanese soldiers and officers. When these crimes were discovered, the brothels were immediately shut down by other Japanese military authorities.

After the war, when there had been time to sort through evidence and obtain testimony from witnesses, the Japanese military men who had organized and carried out the forced-prostitution operation were tried as Class B and C war criminals. Okada, the ranking officer, was executed by the court martial in 1948; the other criminals were imprisoned for between two and 20 years for their crimes.

The comfort women system did exist. The Semarang Incident is highly atypical in that almost all of the comfort women were not recruited by brokers but rounded up by military men. Indeed, with a hellish war to fight on all fronts, the Japanese military had little time or men to spare to tend to the recruitment and maintenance of brothel workers. Comfort women were prostitutes servicing (sometimes exclusively, sometimes not) soldiers and officers in the Japanese military. But the work of procuring the women and seeing to their personal needs was carried out by non-military operators.

A substantial number of comfort women were Japanese. Some were sold by their destitute parents into a life of sexual servitude in exchange for an “advance payment” which the young woman would work off over the course of a set number of years. Others were already professional prostitutes on the home islands who were attracted by the prospect of a much higher income in the Japanese imperial territories.

There were indeed many comfort women from the Korean peninsula. The documentary evidence shows overwhelmingly that Korean women were recruited most often by Korean brokers and proprietors who pitched great potential income—oftentimes as much as Japanese generals—with the option to leave and return home at the end of their contract.

Although the Korean peninsula was a part of Japan proper, having been annexed in 1910, not every Korean was able to speak Japanese, in particular those who were impoverished and had little access to education or any other means of survival. It would have been natural for Korean brokers to be the main nexus between the Japanese military’s demand for brothel workers and the women themselves. They often had to rely on smooth-talking and deception to recruit women to do what was undeniably dirty and disagreeable work.

On a related point, it should be stated clearly here that it would have been impossible for the Japanese military to round up hundreds of thousands of Korean women because the Korean peninsula, of course, was not a battle zone during World War II. The number of Japanese troops stationed in Korea was very low—every available man was needed to fight the multi-front war against the Allies in the Pacific, Southeast Asia, China, and elsewhere.

As the sparse bibliography at the back of Killing the Rising Sun indicates the documentary evidence used to produce the book is so tenuous as to qualify it as a work of historical fiction, and not of history. I could not find a single monograph or article on the comfort women cited by O’Reilly and Dugard, so it is impossible even to say which sources they have used to obtain the erroneous information given in the book.

A different problem confronts O’Reilly and Dugard on the subject which forms the pillar of their argument, namely, that the dropping of the atomic bombs on Hiroshima and Nagasaki in August of 1945 was a necessary evil which saved the lives of at least half a million US servicemen. Whereas the comfort women issue is a subject with quite distinct historical contours, the notion that 500,000 Americans would have died without the atom bombs is pure speculation, and can only ever remain so. This unsolvable counterfactual has haunted World War II scholarship for more than 70 years.

It is O’Reilly and Dugard’s burden to show that the use of the atomic bombs was justified by the lives purportedly saved. But in order for this argument to hold together, its proponent must, by necessity, adopt a kind of Hegelian inevitability in which human agency comes to have a greatly attenuated bearing on the course of events.

The fact is that the Japanese were suing for peace before the decision to drop the bombs on Hiroshima and Nagasaki was made. The war could have been over before the Americans got to Okinawa, or even to Iwo Jima. The American decision to push for unconditional surrender guaranteed that no peace overtures would be entertained until the evangelical New Deal liberals, who oversaw the war, were convinced by Japan’s “utter destruction,” that Japan would never again pose a threat to “freedom and democracy” as the liberals defined it.

In no uncertain terms, the American liberals in 1945 saw themselves as the saviors of the world, and they were determined to effect salvation even—especially—if it meant reducing the enemies of freedom and democracy to ash and rubble. The only thing that made the invasion of Japan inevitable was the absolute inflexibility of the New Deal liberals’ conviction of their own superiority.

In other words, it was not the Geschichtegeist that sent Fat Man and Little Boy to the skies over Japan. There were human decisions at every link along the way. Everyone involved could have stopped the process. There are no chain reactions of interpersonal human will. Otherwise, history itself has no meaning.

Unfortunately, this history in the key of inevitability is precisely the kind of history in which O’Reilly and Dugard trade. This is anti-history history, convenient and soothing fiction, the kind of aggressive assent to unimpeachable American righteousness which has been used by the New Deal liberals and their direct descendants, the neo-conservatives, to justify the grossest abuses of power.

O’Reilly and Dugard have produced a racially-charged interpretation of the Japanese as savage warmongers and wily deceivers, but the unsettling truth is that the accusers, in this case, have at least as much to answer for as the accused.

Since the book was published, Mr. O’Reilly has been forced out of Fox News over allegations of sexual impropriety. This has nothing to do with Killing the Rising Sun, of course, but where one might have hoped that O’Reilly’s early retirement would have been the end of this kind of pseudo-historical emoto-cinematism, one is forced to admit that the genre is deeply ingrained in the American imagination, and likely long to continue.