BOOK REVIEW | ‘Stranger in the Shogun’s City: A Japanese Woman and Her World’ by Amy Stanley 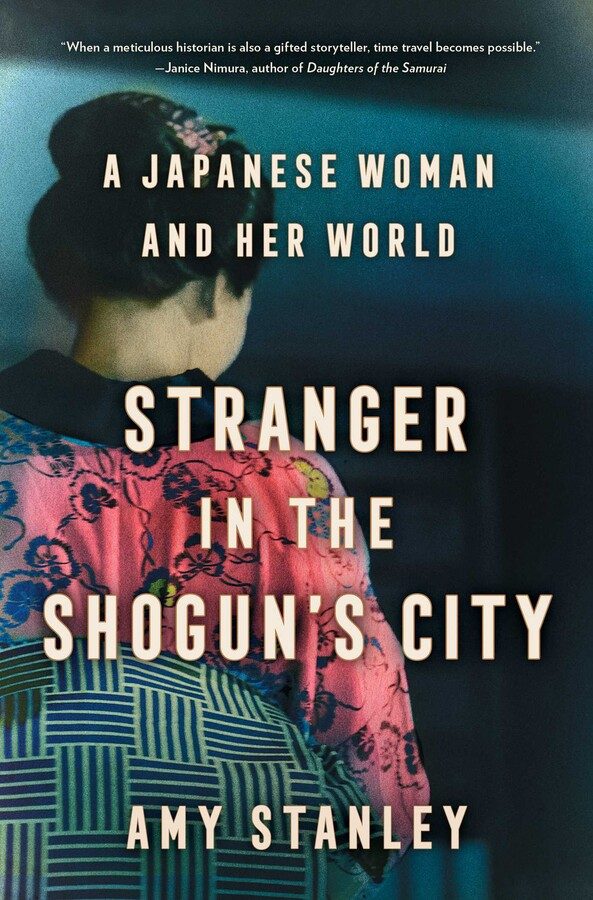 This fascinating book is the story of the last generation of people to know the thriving metropolis of Edo before it became Tokyoーpeople who counted years according to the old calendar, and who lived and died under the aegis of the shogunate.

It is also the story of a complicated family with a headstrong daughter whose life reflected the spirit of the times. Author Amy Stanley begins her narrative not in Edo, but in the tiny rural village of Ishigami, deep in Japan’s snow country. There, in 1804, the priest of the prosperous Rinsen-ji temple and his wife welcomed their second child, a baby girl they named Tsuneno.

The Many Marriages of Tsuneo

Tsuneno began her education at about age 7 or 8. Though not as well tutored as her brothers, who were expected to master the Confucian classics, she was likely to become the wife of a village headman or priest someday. As such, she would be expected to not only tend the altar, but also to read poetry, write letters, and consult manuals, perhaps even keep records.

That day came all too soon. At the age of 12, Tsuneno was married to the priest of a larger temple in a village more than 180 miles from Ishigami. It was so far that she was unable to make the ritual visit to her parents’ home after a month of marriage.

There are no records of her time there. We know only that the 15-year marriage produced no children, that there was a fire in the templeーnot uncommon in that eraーand that Tsuneno returned to Ishigami shortly thereafter. A bill of divorce soon followed.  This, too, was not uncommon, and within a year Tsuneno had remarried, this time into an affluent farming family. Unfortunately, the Tenpō famine began and, after four years with no heir in sight, her husband’s family decided to cut its losses: Tsuneno was again divorced. A third marriage, to another priest, lasted only four months, during most of which she suffered from debilitating eye problems.

Terrified at the thought of yet another marriage, Tsuneno decided on a radical escape: she would go to Edo, a city she had never visited, and although she could not have known, the most populous metropolis in the world. Tales of its wealth and sophistication had been brought back by those who had made the two day walk over mountains to reach the shogun’s capital. It was said that one block could encompass the entire population of Ishigami. Teenagers aspired to standards of fashion they had never seen, with girls trying to wear their obi in what they had been told was the Edo way.

Hard Road to Life in Edo

A junior priest at a nearby temple told her that he had relatives there who would welcome them, and after pawning her kimono, they set off together. Although Tsuneno’s letters are circumspect, it is clear that he cheated her, and seems to have forced himself on her as well.

On arrival in Edo, the priest’s relatives made it clear that they were not welcome. Alone and destitute in a strange city, Tsuneno refused to return, and somehow managed to rent a 3-tatami (6’x 9’) room with a shared toilet in a squalid area of Minagawa-chō.

Still suffering from eye problems, she learned to negotiate the maze of intersecting alleys, to locate wells and latrines, and to write letters home. Among other things, her letters mentioned how cold she was and asked that her remaining clothes be sent before winter made the roads impassable. Also, first and foremost, she learned to find work.

Tracing Tsuneno’s odyssey around Edo looking for employment, author Stanley’s graceful prose evokes the color, the energy, and the noise that collectively made the different neighborhoods of Edo such a vibrant city. We see Nihonbashi with its great merchant houses lining the streets, while outside peddlers bent double under bundles of kindling, balanced bamboo trays of fish, or sold lanterns in a variety of shapes and sizes.

In Tsukiji, the abbot at the main temple commanded resources that even a shogun would envy, but Tsuneno was turned away. Arriving at Jikkenchō, a lonely windy strip of land that belonged more to the bay than the city, an uncle who had a shop there was horrified at her appearance and wrote back to her family to do something about her. But by this time, the roads had become impassable and it would be spring before the letter arrived.

Uncertainties in the Life of an Edo Woman

Eventually, Tsuneno found work as a maidservant in a samurai household, enabling Stanley to describe the social stratification that led many of the samurai into what they called debt hell.

There were other problems attendant on their exalted service: a ritual ceremony to light the brazier that marked the formal beginning of winter involved kneeling in an uncomfortable position for long periods of time. Only light clothing could be worn; if the weather had turned cold earlier, the samurai would be cold too. Movement was impossible. There were no bathroom breaks, leading to innovative solutions best left unwritten, and bald samurai who used artificial topknots to avoid censure risked having them fall off with an embarrassing thud.

Tsuneno’s work was exhausting and poorly paid. But, having learned a bit about job-hunting, she found a better position in Sumiyoshi-chō near Doll Street, where the personae for Edo’s popular puppet theatres were created. It was also the location for the capital’s three major kabuki establishments.

Here she was able to pay off her debts, enjoy the atmosphere of the area, effect a partial reconciliation with her familyーand find a fourth husband, this time of her own choosing. Hirosuke was from Ishigami, though she met him in Edo

In the midst of hard times caused by the decline of the shogunate and rising popular anger at economic conditions, the couple drifted to Shinjuku, described as a gathering place for hardened, ruthless men. They divorced, though she found other jobs and continued to support him.

After what must have been an agonizing decision, Tsuneno went back to Rinsen-ji. A year later, Hirosuke wrote to say that he had found a steady job in Edo and implored her to re-marry him. This she did, breaking with her family again. Hirosuke’s work gave him samurai status and at last Tsuneno could be considered a true citizen of Edo.

However, early in 1853 she fell ill with fever and chills, possibly malaria or typhus, that proved impervious to treatment. She died in May, aged 48. Less than two months later, Commodore Matthew Perry arrived in Edo Bay with his black ships, changing Japanese history and Edo as a city forever.

The Transformation of Edo

With the fall of the shogunate, Edo became the imperial capital of Tokyo and thrived as never before. Stanley describes the transformation of the neighborhoods Tsuneno lived and worked in.

Mikawa-chō, near Minagawa-cho, seemed to become even seedier, being mentioned several times in Matsubara Iwagoro’s 1897 muckraking book In Darkest Tokyo. Sumiyoshi-chō was incorporated into Doll Town, becoming for a time the most prosperous shopping district in the capital. Ginza, where Tsuneno’s favorite employer worked, has attracted some of the world’s most upscale merchandisers and caters to an international clientele of high-end customers.

Railroads were constructed, and within a few decades the journey that had taken Tsuneno ten days, took only one long day, including a transfer, and cost about two yen.

Shinjuku is now home to the world’s busiest railway station, with over two million passengers a day, a terminus for long-distance buses, and a center of the entertainment industry. Until it partially moved to Toyama in 2018, Tsukiji was the largest fish market in the world, where tuna was auctioned for often astronomical prices.

Of Tsuneno herself, little remains save her letters. Her death, unlike those of her brothers, was marked only with a small slip of paper in the Rinsenji archive containing her birth and death dates and posthumous name, which ironically included the character for “obedient.” No feminist icon, her life nonetheless showed that onerous social restrictions could be overcome with grit and perseverance.

Title: Stranger in the Shogun’s City: A Japanese Woman and Her World

Learn More: Additional information about the book is available from the publisher, here.

Purchase the Book: From the publisher or from other booksellers, here.