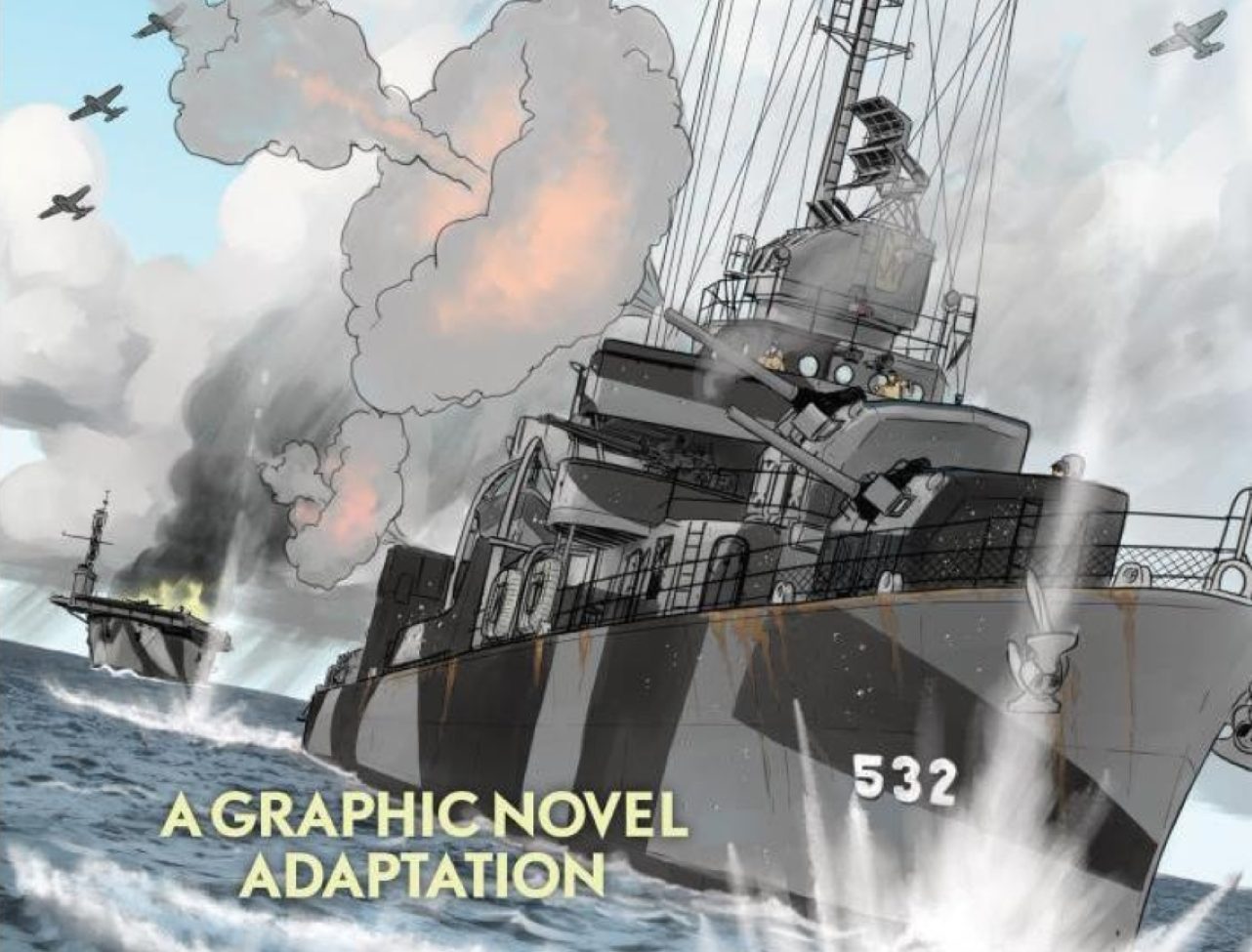 From the cover of 'The Last Stand of the Tin Can Soldiers,' a graphic novel published in 2021 by Dead Reckoning (US Naval Institute).

This is the story of the 3 ½ hour battle off Samar on October 25, 1944 that played a crucial role in the epic Battle of Leyte Gulf during World War II.  Originally written by James D. Hornfischer, it has been adapted into graphic novel form ーessentially comic books for adults— by Doug Murray and illustrated by Steven Sanders, who is in fact a professional comic book illustrator.

As in most major military confrontations, the battlefield is multi-faceted and interactive. Leyte is considered the largest sea battle in human history, and to this day there remain discrepancies between ships’ logs and eyewitness accounts in some critical areas.

Some additional background may be useful.

Back to the Philippines

In October 1944, consonant with US Army General General Douglas MacArthur’s pledge to return to the Philippines, United States forces began arriving on the Philippine island of Leyte. The stakes were high for both sides: for the Americans, retaking the Philippines was critical to the island-hopping strategy that would put its forces within striking distance of Tokyo.

On the Japanese side, even though Japanese ships outnumbered the American forces, policy makers are well aware that their assets are dwindling below replacement rate while the US war machine continued its ability to replenish losses. However, given the discrepancy in numbers of ships and the fact that the Japanese were already ensconced in the Philippines, the odds are not in the United States’ favor.

The Japanese strategy is to lure the US Third Fleet away from the landings at Leyte, which are heavily protected by Admiral William (Bull) Halsey’s 7th Fleet, by using an apparently vulnerable force of Japanese carriers as bait.  As drawn by illustrator Sanders, Commander of the Imperial Japanese Navy (IJN)’s Southern Force Shoji Nishimura observes that unless he can bring the American fleet to combat and destroy it, the war will be lost. He need only make his way through the San Bernardino Strait to come to grips with the Americans.

Nishimura, however, is unaware that he has been detected and about to be ambushed. So he is, but the action is then taken over by Admiral Takeo Kurita’s Center Force and the Yamato, the largest and most powerful battleship ever built, with her 18 inch guns the largest such weapons ever cast and 16-inch armor belts that made her nearly invulnerable to naval gunfire. As one American pilot who tried commented, “it’s like bouncing paper wads off a steel helmet.”

Helped by astounding mistakes made by the intemperate and stubborn Halsey ーaccording to folklore, Halsey’s nickname comes from the US Civil War’s Battle of Bull Run but he will impress the reader as more appropriately considered bull-headedー Kurita’s force exits the San Bernardino Strait without being challenged or even detected.

The Fog of War

Now only one thing stands between the Japanese forces and Leyte: the outmanned and outgunned Taffy 3, a small task unit of the 7th Fleet equipped with little firepower and less armor.  Their crews dubbed Taffy 3’s destroyers, not always affectionately, tin cans for the thin material of their exteriors, and hence the name of the book.

The thinness turns out to be an advantage in certain cases, since armor-piercing shells pass harmlessly right through the decks. However, they are not completely invulnerable.

In the case of the USS Johnston, one shell hits the iron housing of the port propeller shaft, one of the few parts of the tin can hard enough to set it off. Badly wounded ーnot a man in the boiler room survivesー the Johnston limps on, but takes further hits until it begins to sink. As the crew hurriedly prepare to abandon ship, they see the Imperial Japanese Navy destroyer Yukikaze ーthe only ship of its class to survive the war unscathedー pass by, its captain saluting them.

Depicted mostly from the American side, there is much confusion, miscommunication, and just poor decision making. Those familiar with the work of Carl von Clausewitz will recognize these as classic real-life examples of the great Prussian military strategist’s fog of war.

Army anti aircraft open fire, not recognizing friendly navy planes. Ammunition runs short: a fighter pilot remarks that he will have no trouble finding the Japanese, but, since both his bomb bays are empty, he is not sure what he will do when he gets there.

Gun tubes jam. A commander issues orders to set off a smoke screen despite his crew’s protests that this will give away the ship’s location.

MacArthur’s insistence on having all communications go through him causes delays of hours when seconds are crucial.  There are disconnects between the White House in Washington and the Pacific Command in Honolulu.

At one point, Halsey interprets a distractor that is typically added to the end of messages to confuse Japanese eavesdroppers as literally true, sending him into a tantrum.  After being talked down by a brave subordinate, he agrees to turn his battleships around. But they cannot cover the distance soon enough to help Taffy 3, which comes close to total annihilation.

‘Who Won the World Series’

In a single encounter, four of Taffy 3’s ships ーthe USS Hoel, USS Gambier Bay, USS Samuel S. Roberts, and the afore-mentioned Johnstonー are destroyed, with the survivors scattered over thirty miles of ocean.

A US plane spots them, but radios an incorrect location back to base. By the time the error is discovered, many of the men have been lost to exposure, thirst, and shark attacks.

Eventually, a few catch sight of an American ship, whose crew at first seems skeptical, asking them “who won the World Series?”  On hearing “St. Louis,” they are welcomed aboard.  The remaining survivors are picked up by a patrol craft from the Seventh Fleet.

Seen from the Japanese Side

The Japanese side is not immune to misinformation and misestimation.  Admiral Kurita calls for air cover but cannot get it.

Wrongly informed that his opponents are swift fleet carriers and cruisers, Kurita reasons that a high speed pursuit will burn too much of his ships’ dwindling supplies of fuel and that he cannot chase the Americans forever. He might have been able to carry through his mission and break through to MacArthur’s beachhead, but he is concerned by intercepted messages telling of American planes refueling and rearming at Tacloban, nearby Leyte.

Although Kurita’s battleships are not seriously damaged, American air and destroyer attacks have broken up his formation and he has lost tactical control.  He also remembers the demise of the mighty Yamato’s sister ship, the Musashi.

Seeing no alternative, Kurita regretfully orders his flagship, the Yamato, and the other remaining ships to turn north.  Although they return safely to Japan, the Imperial Japanese Navy is rendered ineffective for the remainder of the war.

As the withdrawal proceeds, Admiral Halsey’s Third Fleet aircraft finally catch up to Admiral Ozawa’s decoy force and achieve a resounding if hollow victory, though too late to save the fifth Taffy 3 ship, the USS St. Lo.

Hornfischer observes that the day stains Halsey’s name, since a thousand sailors from Taffy 3 will never return home.  Their memory is preserved in the motto “Tin Can Sailors” on the logo of the National Association of Destroyer Veterans, founded in 1976 to make grants to historic ships.

This is a gripping tale and beautifully illustrated in comic book style. Even while knowing the eventual outcome, it is a page-turner.

There are, however, limits to how fully complicated military actions can be presented in graphic form. While the narrative can be enjoyed strictly on its own terms, the reader will discover it much more meaningful if placed within the context of the Battle of Leyte.

Title: The Last Stand of the Tin Can Sailors

Price: $29.95 USD (discounted under some circumstances)

To learn more and to purchase the book: See the publisher’s website, here.