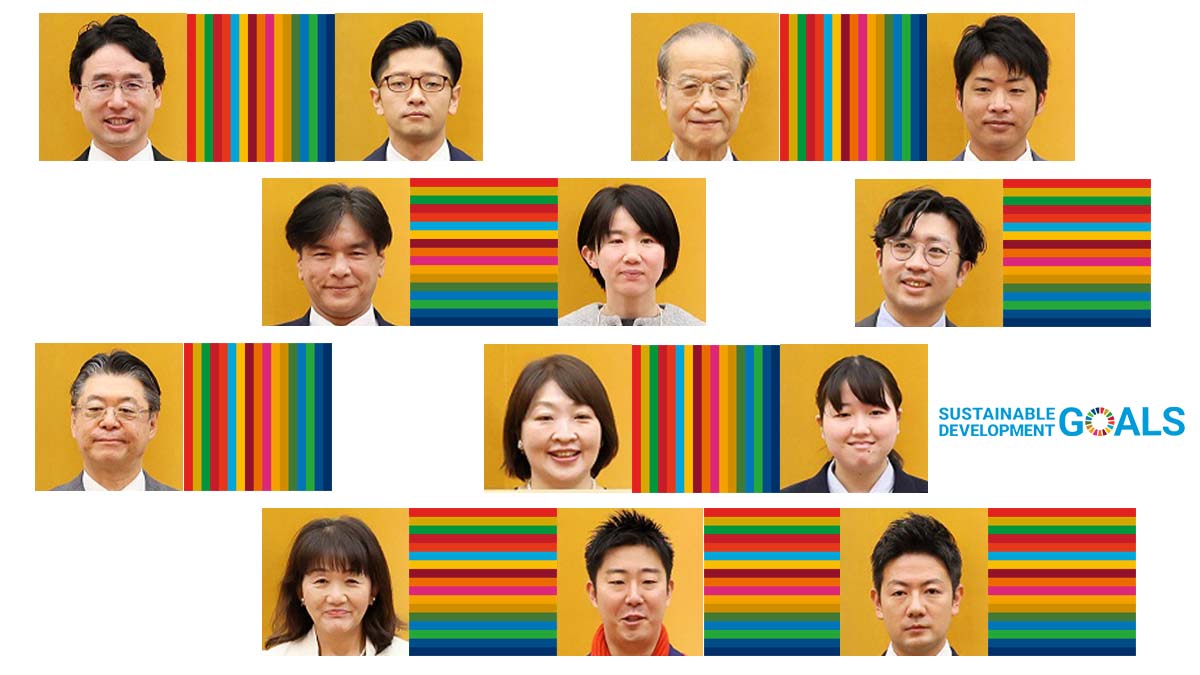 Winners of the 5th Japan SDGs Award, singular photos courtesy of the Government of Japan (c).

Part 2: 5th Japan SDGs Award Winners and Their Initiatives for the Decade of Action

As the year drew to a close on December 24, 2021, thirteen Japanese innovators were gathered at the Prime Minister’s Office in Tokyo, Japan. Their purpose: to bring about a sustainable society in Japan, and the world. They were there to be recognized for their groundbreaking innovation, collaboration and commitment.

Among a large number of applications, IZUMO Mitsuru, founder of Japanese biotech company Euglena, was one of those receiving special recognition.

He heads a Japanese biotech company that consciously puts its resources and technology to work supporting refugees and creating employment for poor farmers in Bangladesh.

The groundbreaking innovation and perseverance the company demonstrated in its work in Bangladesh brought Euglena the top accolade at the 5th Japan SDGs Award. The award, together with associated awards from other officials, were established in 2017 to promote a wide range of actions for sustainable development.

In fact, Japan is engaging all levels of society in this effort, and its SDGs Action Plan for 2022 was a focus of the 11th meeting of the SDGs Promotion Headquarters on the same day.

“Addressing economic, social, and environmental issues in a comprehensive manner, the SDGs are an important compass for overcoming the unprecedented crises of the novel coronavirus disease (COVID-19) and climate crisis,” said Prime Minister KISHIDA Fumio addressing the meeting.

Euglena symbolizes grassroots efforts towards this aim. The company philosophy is “Sustainability First.”

“We will continue to drive our business forward towards the resolution of the problems in Bangladesh, with a firm determination to realize sustainable development for people and the planet,” pledged President Izumo upon receiving the award.

Euglena is not alone. An increasing number of local governments, and NGOs/NPOs are using their resources and technology, making outstanding efforts in the field.

It’s a testament to the rising awareness towards the SDGs, that hundreds of organizations compete in this award which has no financial prize.

“By combining the wisdom of various stakeholders, including civil society, private enterprises, and the government, Japan will take concrete actions, both at home and abroad,” promised then-Foreign Minister Kishida in 2017.

The SDGs Action Plan and the Japan SDGs Award are manifestations of this goal. It also goes hand-in-hand with the Prime Minister’s determination to realize the “new form of capitalism” that he has been advocating, and to advance the SDGs.

“Through these activities, we will realize a new form of capitalism that creates a sustainable economy through a virtuous cycle of growth and distribution,” said Mr. Kishida, adding “and lead efforts to take on the challenge facing our world and times: the achievement of the SDGs.”

In addition to the SDGs Chief’s Award, the 2021 Deputy-chiefs’ Awards and the Special Awards recognized several companies and organizations for their efforts in promoting the SDGs.

The Deputy-chiefs’ Awards are recommended by the Chief Cabinet Secretary and the Foreign Minister, and were attributed to five organizations. One of the winners was eboard, an NPO in Nishinomiya City, Hyogo Prefecture, that secures educational opportunities for children with learning difficulties by providing subtitles for video lessons.

Another recipient was HAKKI AFRICA Inc, which was acknowledged for developing microfinance services for cab drivers in Kenya.

A total of 13 organizations received accolades, including the Special Awards.

Award with Meaning but Without Money

A distinctive feature of the awards is that members of the SDGs Promotion Roundtable are the ones who review the projects selected for recognition. The Roundtable itself is made up of NGOs, NPOs, experts, private enterprises, and international organizations.

The 2021 awards saw several highly regarded works by the younger generation. The Nanyo Company Club of Aichi Prefectural Nanyo Senior High School in Nagoya City was selected as a winner of the Special Award for developing fair trade and carbon offset products.

Although the awards are not accompanied by prize money, there were over 280 applications in the first year. Since then, around 300 companies and organizations have applied annually, amounting to a cumulative total of approximately 1,500 applications so far.

Is SDGs the New Buzzword?

The year 2021 can be called the “first year of the SDGs” for Japan. The term “SDGs” was one of the nominees for the 2021 U-Can New Words and Buzzword Award, which selects the most popular words of the year from The Encyclopedia of Contemporary Words.

The aim of the UN Millennium Development Goals (MDGs), the predecessor of the SDGs, was to reduce poverty in developing countries. The SDGs, meanwhile, aim to solve a wide range of issues that transcend the distinction between developed and developing countries, encouraging people to recognize problems as “personal matters.” This, in turn, has led to higher awareness.

The Japan SDGs Award of the government, along with the SDGs awards sponsored by the media, various companies, and local governments, have contributed greatly to raising the SDGs awareness. Companies have incorporated the SDGs into their management plans and leveraged them for investment and branding. More people are wearing the SDGs lapel pin, with its 17 colors, each representing an SDG goal.

The conflict between developed countries, which are obligated to reduce their emissions, and developing countries, which are not obligated to do so, came under focus at the 26th UN Climate Change Conference of the Parties (COP26) of the United Nations Framework Convention on Climate Change (UNFCCC). The meeting provides a forum for the discussion of measures to combat global warming. Inclusive of the global warming discussion, though, the SDGs aim to realize goals through empathy and cooperation, and by “leaving no one behind.”

This is an area where Japan has valuable expertise. The country managed the spread of the novel coronavirus through voluntary restrictions on its citizens’ behavior, such as vaccinations and the wearing of masks, instead of implementing lockdowns like many other countries. Expectations are high for the success of the all-Japan initiative.

Japan has been proactive in assessing the progress of SDGs measures by the visualization of SDG-related budgets, establishing priorities for the SDGs Action Plan, and conducting two virtual news releases.

“The zero-emissions transformation in Asia is an engine for the Japanese economy, and we plan to support it to the best of our ability,” the Japanese Prime Minister said at COP26 in November 2021.

The Decade of Action set by the UN is now less than eight years away. In 2023, Japan will assume the G7 presidency and bear the great responsibility of providing leadership in achieving the SDGs goals set out by the international community.