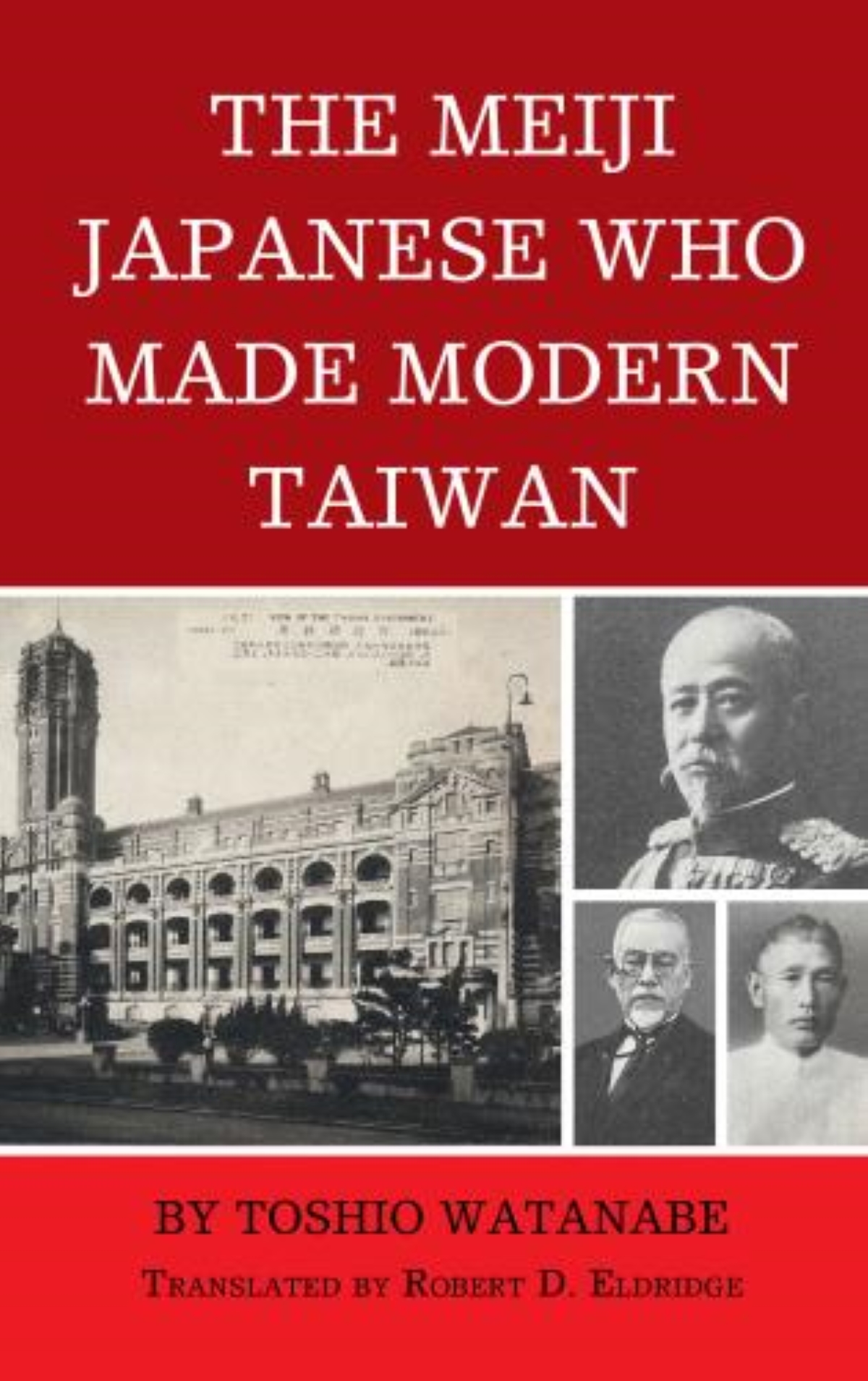 Book cover: The Meiji Japanese Who Made Taiwan, by Toshio Watanabe, with translation by Robert D. Eldridge.

Jolted out of its self-imposed isolation by Western intrusions and the unequal treaties imposed on it, Japan set about to make itself the equal of the great powers.  The new Meiji government, convinced that if Japan did not learn Western civilization it could not survive as an independent state, undertook a heroic effort to emulate what made the great powers great.

Imperialism, which now has a bad name, was much esteemed at the end of the 19th century. The far-flung possessions of France, Russia, and the United Kingdom aroused great envy, as did the great trading empires of the Dutch and the Americans.

The Making of a Model Colony

So Japan, among other manifestations of the modernism it coveted, would need an empire. Taiwan, acquired from the moribund Qing (Manchu) dynasty in 1895, was the first of these, and the Meiji leaders were determined that it would be a success.

Taiwan had been administered, if that is the right word, with indifference and corruption for two hundred years before being made a province only the year before Japan annexed the island. Making it into a model colony and showcase of Japanese expertise was a herculean endeavor which the new government set about with enthusiasm.

The island nation was home to outlaws from China and a variety of indigenous peoples, some of whom were cannibals. Malaria and other tropical diseases were rampant.

Roads, once meandering muddy paths, were straightened and paved. A land survey was conducted, a railroad built, and a central bank established. Japan’s leading architects designed government buildings ― to this day, first time Japanese visitors to Taiwan are struck by the resemblance of the presidential office building to that of Tokyo Station. and indeed both were designed by Uheiji Nagano. The headquarters of the colonial government reflected the eclectic blend of Japanese, Baroque, and neoclassical elements that was in vogue at the time.

Medical care, including vaccinations, was introduced, and Western-style schools were opened that ― revolutionary for the time ― taught both boys and girls, albeit separately.


The Meiji Men Who Made Taiwan

The story of the energy and dedication of the men who transformed Taiwan into a successful colony and laid the foundations for its success as a modern state is the subject of Professor Toshio Watanabe’s book.

It opens with an anecdote about Furuichi Kōi, a student in Paris whose landlady, worried that he was destroying his health by working so hard, suggested that he take a day off.  His reply, “My resting for one day means Japan’s modernization will be delayed by an extra day,” exemplifies this spirit and can be considered the leitmotif of Watanabe’s narrative.

One of Kōi’s students, Yoichi Hatta, is a case in point. Taiwan’s governor-general was aware that the island had insufficient energy to develop Kaohsiung as a port that could serve as the base for Japan’s southward expansion and favored using Sun Moon Lake for power generation.

Hatta dutifully dropped a reservoir project he had been working on. And armed with quinine against malaria, a waterproof tent, a rucksack of rice, shoyu, and canned goods, he set off through the difficult hilly terrain of the area.

The Obstacles to Modernization

Quite accidentally, he discovered the ruins of a brick dam built during the period of Dutch rule and realized that this would be the perfect place to construct a much larger version of the original. Numerous problems would have to be solved first, however. Water would have to be drawn from the main stream of a larger, less conveniently located river, meaning that a tunnel would have to be constructed. So would mainlines, branch lines, irrigation channels, and drainage channels.

Unpredictable setbacks delayed progress. An explosion near the entrance of the tunnel left 50 dead. And financial issues after the great Kantō earthquake that necessitated the rebuilding of much of Tokyo caused layoffs.

In the end, Hatta succeeded, using an unorthodox technique that has withstood Taiwan’s extreme seismic events up to the present, while turning the formerly barren Chianan Plain (in Southwest Taiwan) into a bountiful production area for rice, sugarcane, and other crops.

Hatta, who died in 1942 when the ship he was traveling in was torpedoed, is now honored by a park in his name with his statue. Nearly forgotten for many years, he has become a symbol of Taiwan-Japan friendship.

Another major problem given attention by the young Meiji technicians, one complementary to the need for water, was rice, the staple food of the region.

Rice riots were frequent in Japan after shortfalls caused by a bad harvest and storm damage were exacerbated by the Russo-Japanese War of 1904-1905, and Taiwan was looked to as a possible solution. The island produced rice, but its long-grain Indica did not suit Japanese tastes for the more moist and flavorful variety known, appropriately, as Japonica.

Producing such a variety of native rice was a task entrusted to Megumu Suenaga and Eikichi Iso. This was a tedious and painstaking process. Pollen with especially good characteristics would have to be attached to equally special and hardy pistils, the ovule bearing organ of a seed plant, to mate them artificially. It was important that the plant have many ears to enable it to produce many grains of rice, that it be strong enough to resist several kinds of diseases, and that the stalk stand as straight as possible to absorb maximum sunlight.

Initially 1,365 types types were tested, then narrowed down to 485, with less-than-optimal results. Suenaga would leave home at 5 AM and travel four kilometers to work carrying food for his morning and noon meals, return around 7 or 8 PM, eat dinner, and report to Iso, his superior, on the results of the day.

Eventually, it was decided to try growing Japonica, despite Taiwan’s different soil and weather conditions. The results were surprisingly good, though still initially imperfect.

After more painstaking work, however, Suenaga and Iso were able to improve on the original. Local farmers, at first skeptical, proved willing to accept the risks. By 1923-24 cultivation had spread throughout the island’s rice-growing areas.

Named Hōrai rice, it became the second largest crop under cultivation in the Japanese Empire, as well as the basis for Iso’s doctoral dissertation and the many subsequent honors conferred on him.

After Japan’s defeat in World War II, Iso was one of a small number of technical personnel that the new Chiang Kai-shek government considered indispensable and enjoined to stay on. This he did, returning to Japan only on his retirement in 1957, 45 years after his arrival and having received the new government’s highest award for service to Taiwan.

Where Watanabe Takes Us

Though fascinating in content, the book can be confusing to read. Its contents first appeared in installments in the monthly magazine Seiron over the course of a year, with the book making no attempt to put the historical details in order or remove overlaps.

Chapter Three, Taiwan as a Frontier Dream, might better have been placed at the beginning of the book, followed by Chapter Six, the chapter on the administrative styles of governors-general Gentarō Kodama and Shimpei Gotō following after. It was their actions which enabled the work of Hatta, Iso, and Suenaga. And Chapter Five concludes with the end of World War II in 1945, while Chapter Six begins with the end of the Sino-Japanese war of 1895.

Though we find out in detail what happened to Iso and Hatta, Suenaga disappears from the narrative. Only by referring back to the very beginning of the book do we find a terse one line stating that he died in 1939, giving no details.

Still, disjointed as it may be, this is a fascinating read. Photographs, maps, and drawings are generously distributed throughout, making it easier for readers to understand the intricacies of such issues as rice hybridization and the semi-hydraulic fill method for dam construction.

One is left with admiration with the men who accomplished so much under such difficult circumstances while providing the solid foundation that, along with the efforts of its own people, has enabled Taiwan to become so successful in the post-colonial period.

All praise to Professor Watanabe for having produced the book and Dr. Eldridge for his skillful translation thereof.

Title: The Meiji Japanese Who Made Modern Taiwan

To buy the book: Through the publisher at this link, or through Amazon and other booksellers.