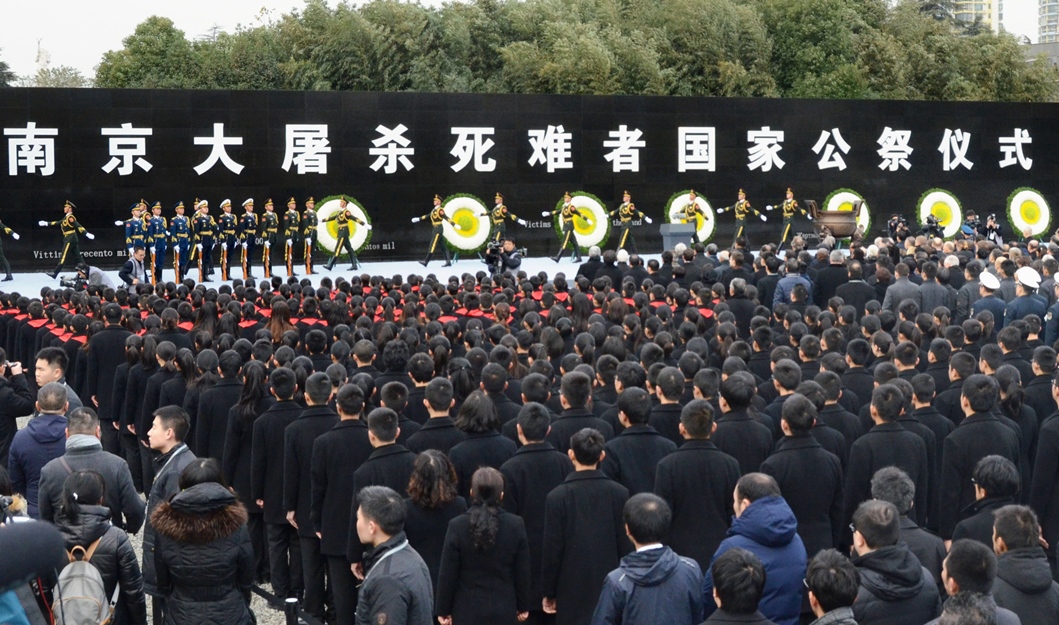 ~The Chinese government claims 300,000 died, but Nanjing University’s Dr. Lewis S.C. Smythe and Chinese field workers in 1938 found only 2,400 had been killed due to soldier violence, 4,200 taken away, and 850 died as a result of military action~

It is nigh on impossible to conduct a debate with a Westerner in which one challenges the Chinese-issued interpretation of the 1937-1938 Nanjing Massacre, where they claim 300,000 died. So few will truly listen. Merely attempting to do so is to invite charges of “similarly” being in denial of the Jewish Holocaust.

There is a considerable degree of irony in this mindset. On a large variety of Chinese-related issues and events — including the Long March, the Great Leap Forward, the Cultural Revolution and, most recently, the Chinese experience with COVID-19 — the official view of the Chinese Communist Party (CCP) is held to be spurious at best. It is only the case of Nanjing in which so many are so trusting.

Before reading further, it behooves all to consider whether their willingness to trust the Chinese government over a full gamut of issues is consistent.

The international settlement was a component of China’s “100 years of humiliation”: domination at the hands of Europe, the United States, and, subsequently, Japan. Its residents enjoyed extraterritorial protection, making them exempt from Chinese law and the clutches of Chinese police.

The Japanese arrival at Nanjing’s gates was no surprise. The city had been bombed in the months prior to their arrival. The Chinese leadership issued a mandatory evacuation order and then fled. There was no functioning Chinese administration when the Japanese entered the city.

Those without the resources to leave were instructed to head for the international settlement, which had been declared a safety zone. It was administered by the International Committee for the Nanjing Safety Zone, 15 Westerners who had decided to remain.

The Japanese had committed to respecting the zone in principle, so long as it was not exploited as a safe haven. These reservations were proven well-founded. Prior to the Japanese assault on the city, the Chinese set up anti-aircraft batteries within its confines and armed soldiers were maneuvering within it.

How Many in the City of Nanjing?

In a letter to the Japanese embassy, dated December 17, 1937, John Rabe, the German-born leader of the international committee, claimed that, on the night of December 13, when the Japanese entered Nanjing, he had “nearly all” of the remaining civilian population of “200,000” gathered in the zone. They were the “poorer sections” of Nanjing’s population, “the trained, intelligent and active people all” having “moved further West.”

This figure of 200,000 is stated again and again in both formal and informal sources. It should not be in question. It was subsequently revised upwards, not downwards, to 250,000 in mid-January 1938 by Rabe himself.

After the city walls were scaled and breached, the remaining Chinese troops rampaged before attempting to blend into the civilian population. They discarded their uniforms and stole civilians’ clothes before entering the safety zone. Some were disarmed by the committee in an orderly style. Others entered on their own terms. The earliest sought entry was on December 9, four days before the city fell.

The Japanese response was to enter the zone to round up the soldiers. A figure of 20,000 appears to have been non-controversially accepted, many of whom were then executed. Among this figure were a number who were either mistakenly or opportunistically deemed to be soldiers by the Japanese troops.

It is sometimes claimed that Rabe “saved” 250,000 Chinese souls. Indeed, that was stated by Rabe himself in his diary as he lamented his life in post-World War II occupied Berlin. The veracity of the claim set aside, it is the clearest validation that there was no massacre of the civilians sheltering within the zone, for they couldn’t be both massacred and saved.

Death Outside of the Safety Zone

Within the zone, robberies, rapes, and murders were documented by the international committee. Some Japanese historians complain that many of these cases were not directly witnessed by committee members and are thereby suspect. These sentiments are supported by Chancellor Paul Scharffenberg of the German Nanjing embassy, who wrote in an official memorandum that of “all these excesses, one hears only one side of it, after all.” In any event, the documented figure for murders — of less than 100 — is insignificantly small when viewed in the light of the 300,000 being claimed.

One of Rabe’s concerns was the prospect of disease from rotting corpses, one of which was dangerously near his home. On January 7, 1938, he once again called the matter of unburied corpses to the attention of the Japanese authorities, suggesting that perhaps “a thousand” were lying about the city. According to New York Times reporter Tillman Dirdin in a January 9, 1938, report, they were a mixture of both civilian and military.

Later diary entries detailed multiple occasions of corpses being pulled out of Nanjing’s lakes — again, a mixture of civilian and military. The numbers ranged from around 50 to 100.

The most scientifically credible means of settling the debate regarding massacre numbers would be for a sociologist on hand to carry out field work in the massacre’s wake. In the case of Nanjing, this was precisely what occurred. One of the members of the international committee was Dr. Lewis S.C. Smythe, professor of sociology at Nanjing University.

With the help of Chinese field workers, Smythe carried out a comprehensive survey of Nanjing and its surrounds between March 9 and April 2 of 1938. He found that 2,400 had been killed due to soldier violence and 4,200 taken away and as yet not returned. A further 850 died as a result of military action, predominantly shelling and bombing.

Smythe had no incentive to skewer his findings in the interests of the Japanese; his Chinese field workers, even less so. His similar survey concerning the fighting around Shanghai in 1932 was never called into question. 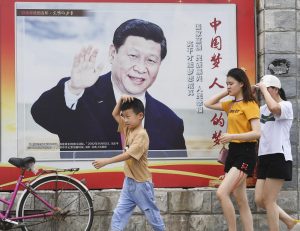 Children walk by a poster of Chinese president Xi Jinping who said in 2014 that the figure of 300,000 massacred in Nanjing would stand, despite the evidence that the number was much smaller.

The Chinese, to their credit, are attempting to accurately tabulate and memorialize the civilian victims of Nanjing at the Memorial Hall to the Victims of the Nanjing Massacre, located within Nanjing City. They have presently identified 10,664, a finding that conforms with the Smythe report.

If the Nanjing Massacre was thereby considered to be of 20,000 Chinese military deserters and stragglers, and several thousand civilians, there would be little controversy. Regrettably, it is not. The figure of 300,000 has been etched into a wall of the Memorial Hall. In March 2014, Chinese President Xi Jinping confirmed that 300,000 would stand.

Who were the additional alleged 270,000 to 280,000? The most famous book on the Nanjing Massacre is The Rape of Nanking by Iris Chang, published in 1996. According to Chang, they were those who had remained within the walled city but outside of the safety zone. “Historians later estimated...more than half a million civilians” were trapped in the city, writes Chang, and that presumably around 280,000 were not able to make it into the zone — although, in her endnotes, she declines to tell us who these historians were. This assertion is not only in direct contradiction to the contemporaneous account of John Rabe, it defies common sense.

The Japanese attack on Nanjing has strong parallels with Hurricane Katrina, the natural disaster that devastated New Orleans in 2005. Those who were able to evacuate did so. Those that were not were instructed to shelter at a designated facility. Some stayed in their homes.

In the case of New Orleans, the figure that remained at home was 17%, yet these were individualistic Americans disregarding the full measure of a hurricane, not destitute Chinese in the path of a foreign army. Is it rational to believe that around 60% of Nanjing’s population defied the mandatory evacuation order and failed to seek shelter — a percentage far greater than at New Orleans?

Were some of Nanjing’s civilian population unable to reach the zone in time? According to Rabe, on December 8, people were “pouring into the safety zone from all directions.” December 8 was five days before the city fell and implies that all had ample opportunity to move into the safety zone’s confines. The Japanese contend that when they entered the city, it was all but deserted. Common sense suggests this was true.

A common fallback position for adherents of a multi-six-figure massacre is that the majority of the deaths were civilians living outside of the city’s walls, evident by the devastation of Nanjing’s surrounds. The failure of this argument lies in the scorched earth policy in which the Chinese troops engaged as they retreated from Shanghai to Nanjing. These tactics ensured that few were around for the Japanese to kill, even if they were so inclined.

An even more frequently heard retort is that the Japanese should simply accept the gist of the Chinese assertion and take 300,000 on the chin. In reply, the Japanese might then suggest the following be included within the forwards of their history textbooks.

An imaginary note on the numerical totals might read as follows:

Presented with the above, the jaws of the “nigh on impossible” clique typically drop to the floor. “What? Facts matter! Japan, are you kidding me!” So completely have they come to accept the decades-long mantra that Japan is a nation in historical denial.

But you can’t have it both ways. Do numbers matter or don’t they?

Primary sources and contemporaneous observation clearly suggest that the death toll at Nanjing was markedly less than the 300,000 which the Chinese assert. Common sense suggests the extreme majority of the population evacuated or sought shelter, rather than remained in the path of an invading army.

History, however, is more than just a matter of logical deduction and an examination of the evidence at hand. There are also political and emotional considerations with which to contend. In the words of noted author and historian Ian Buruma, “almost everything” written on the subject of Nanjing “has a political bias.”

(The politics of the Nanjing Massacre will be addressed in part two of this series.)