[Bookmark] Okutama: In the Hills Around Tokyo are Autumn’s Glorious Colors 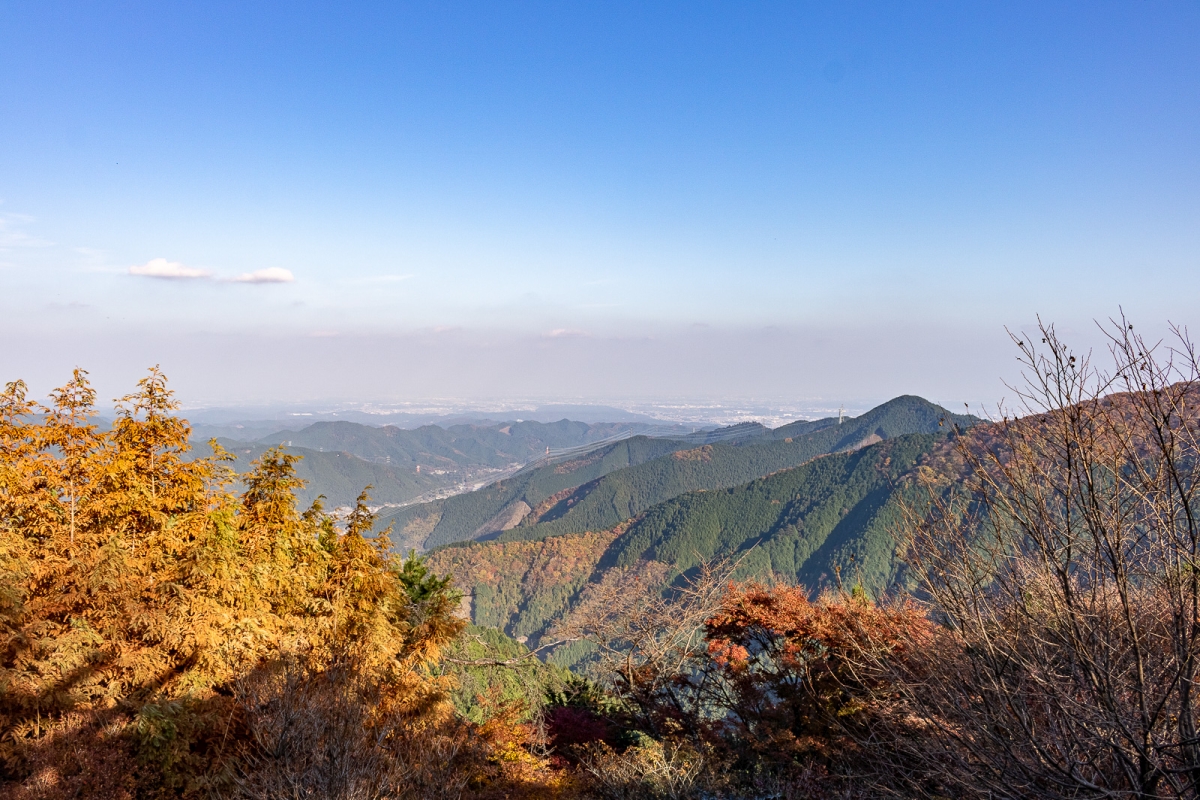 ～Take a slow train ride. There is impressive mountain and forest scenery even within Tokyo itself.～

Autumn is easily the most pleasant time of the year in the Kanto area, especially when there is a long stretch of what is called akibare 秋晴れ (clear, sunny autumn days) in Japanese. Not only is the weather good, there are spectacular autumn leaf displays even within Tokyo itself.

Taking advantage of a stretch of the akibare weather and wanting to show that there is impressive mountain and forest scenery even within Tokyo itself, my older son and I visited the Okutama area on November 15.

It was his first trip. For me it was a repeat of something I did in the 1970s when I was first in Japan to do research for my PhD thesis.

Okutama: A Region, A Municipality

Okutama is both a region and a small municipality. The latter is the most northern and western point of Tokyo. The population is approximately 5,000, with an economy based on tourism, forestry, and charcoal making.

Okutama is also the terminus for the Ome Railway Line that runs between Tachikawa and Okutama. The station building itself is quite attractive, and something of a substitute for the now-gone Harajuku Station for those of us who appreciate retro architecture.

Directly across the street from the station are stairs that lead down to the Tama River. We descended to the river and were both impressed by the clarity of the water and the early — but still striking — autumnal colors of the trees lining the valley. 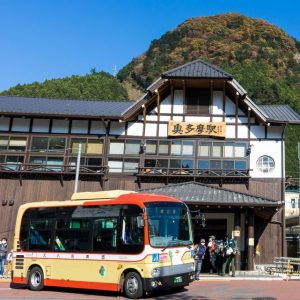 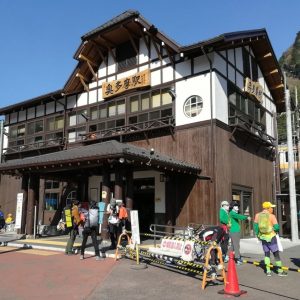 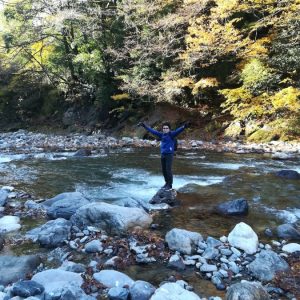 A Dip in a Woodland Bath

Ascending from the river to street level, we set out to walk to Okutama Lake, which was created by damming the Tama River. Not far from the station we saw a sign indicating the availability of forest bathing. Intrigued, we departed from our course to the lake and headed uphill into the forest.

Forest bathing received a brief spate of attention in mid-2019, associated with the publication of the book Forest Bathing: How Trees Can Help You Find Health and Happiness by Qing Li (Viking, 2018). 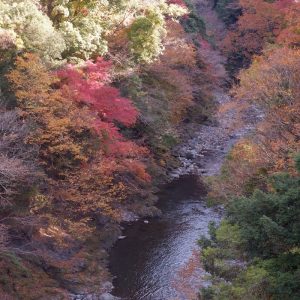 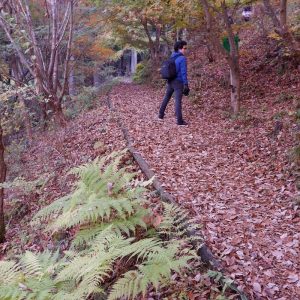 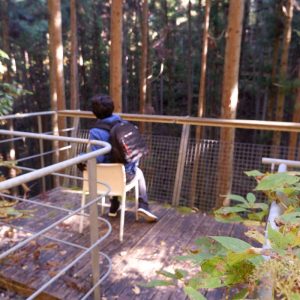 Sunbathing in the forest

The facilities for forest bathing consist of a number of small shelters not unlike rural bus stops with just a roof and a chair, and some enclosed shelters with terraced seating and large glass windows.

None of these facilities appear to have been used recently. Whether this is due to the pandemic or the passing of the forest bathing fad is not clear.

The hiking trails were well-maintained and, even if we did no bathing, the detour was pleasant. 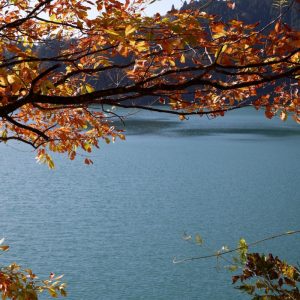 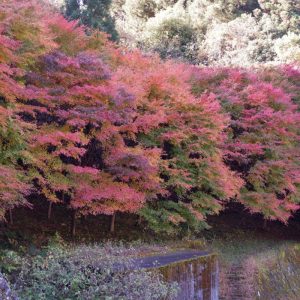 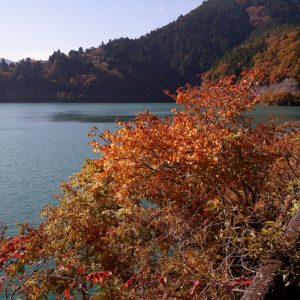 The lake was first proposed in 1932 to meet the water needs of the rapidly increasing Tokyo population. It was not completed until 1957, in part because construction was suspended during the Pacific War.

Eighty-seven people, including six Koreans, were killed in construction-related accidents. A cenotaph memorializes them.   In addition, 945 households totaling some 6,000 people were displaced by the lake behind the dam.

As is the case with other artificial lakes supplying drinking water to Tokyo such as Tamako, there are no recreational uses of the lake itself. Nonetheless, when we visited, the dam area was quite crowded.

There are picnic facilities and a museum dealing with the history of the area and the construction of the dam. The museum building houses a rather spartan cafeteria, but my lunch priced at ￥1,100 was quite tasty.

For those so inclined, there is a 13-kilometer hiking course along the east and south sides of the lake that offers numerous opportunities for photographing the autumnal colors with the sun glinting on the lake surface in the foreground. 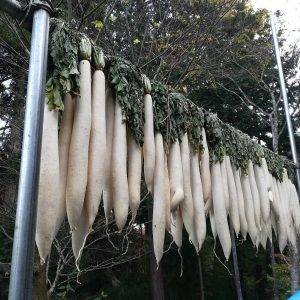 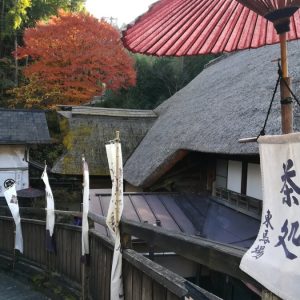 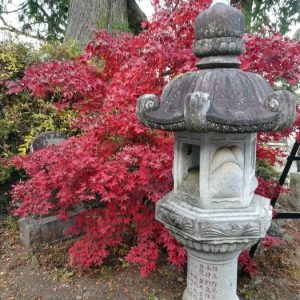 Aside from hiking near the lake and from Okutama Station, other attractions include Nippara Limestone Cave, a rock climbing facility, trout fishing and the opportunity to cook your own fresh trout lunch, and Okutama Onsen (Moeginoyu), a “tattoo-friendly” hot spring bath (onsen) that is open on a walk-in basis, similar to a public bath.

Since our goal was autumnal colors and we had visited similar caves in the Peak District to the west of Sheffield, after lunch at Okutama Lake we returned to the Okutama Station and used our day pass tickets to go to Mitake Station to visit the Musashi Mitake Shrine. Rather than wait 40 minutes, we walked to Takimoto Station for the cable car that goes most of the way to the shrine. 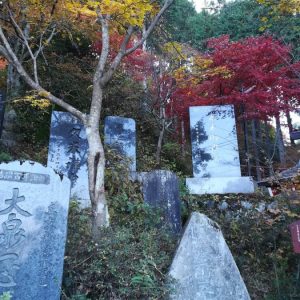 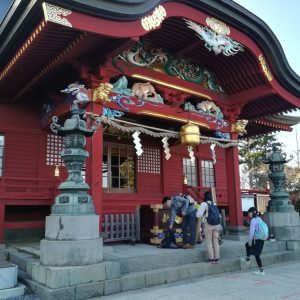 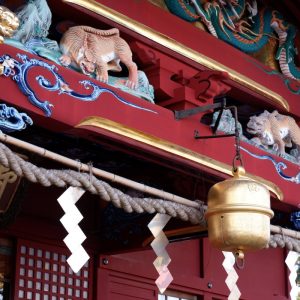 In retrospect, I would not recommend walking. The route is not particularly interesting and is very steep for the last kilometer or so to the cable car station.

Usually the cable car runs three times per hour, but because of the number of visitors, it was running continuously. A round trip was somewhat pricey at ￥1,310 JPY, and we had already done hours of walking, but we used the cable car both up and down.

Even if you use the cable car, you are still some distance ー 330 steps ー from the shrine itself. On the way, you pass through a village that is said to have been serving pilgrims for at least two millennia. Aside from souvenir shops, there are numerous Japanese-style inns.

The cable car ride itself passes through a forest that was already showing autumnal colors. These became more vivid along the route to the summit (960 meters), where the shrine itself is located.

Unfortunately, the weather was somewhat hazy. The view out over the Kanto region was impressive, but not as spectacular as it can be on a clear day.

Adjacent to the shrine is a “treasure house” (aka museum) noted for its sword collection. 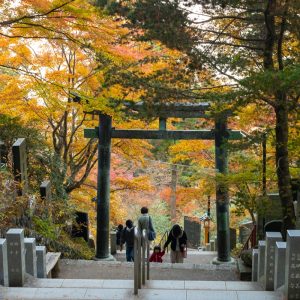 Steps to the shrine 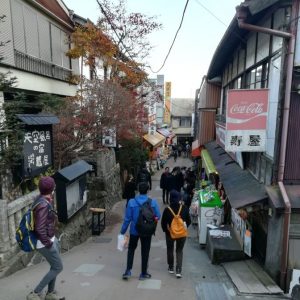 Street with many souvenirs 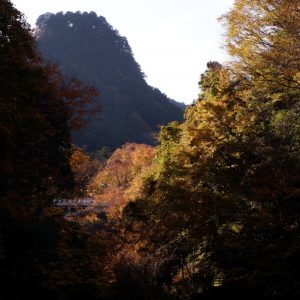 Autumn views into the hillsides

No outing in Japan is complete without souvenirs for family members and sometimes for friends who could not join your travels. Our souvenir, picked by my son, turned out to be wasabi-flavored vinegar.

Until visiting Okutama, I had associated wasabi production with the Izu Peninsula. But, in fact, the Okutama area is also a major production center.

Wasabi root is relatively expensive and has a short shelf life. Supermarket wasabi in plastic tubes and that which comes in little plastic packets with store-bought sushi is largely horseradish, artificial coloring, and a small amount of wasabi.

In Okutama one can find all manner of wasabi-based edible souvenirs, as well as wasabi root itself. These shops also sell a wide range of items made from wild plants that grow in the surrounding forests.

On weekends there are, however, three direct trains in the morning that run from Tokyo to Okutama via Shinjuku and Tachikawa. In the late afternoon there are three trains running from Okutama to Tokyo Station.

The train sets used are similar to the train sets used on the Chuo Line, with some differences. There are toilets and, at certain stops, passengers need to open the doors by pressing large buttons on either side of the doors. This is to avoid letting in cold air at stations where few passengers board or leave the train.

Another point to note is that the weekend through-trains split midway through the journey. Four cars go to Itsukaichi, and the remaining six continue to Okutama.

The fare from Shinjuku (￥1,100 JPY) or Tokyo (￥1,169 JPY) is such that it is advantageous to buy an Odekake Pass (￥2,720 JPY) that can be used throughout the JR East Tokyo network for one day. These tickets are sold from the same machines that sell Shinkansen and other long distance tickets.

If your station does not have one of these ticket machines, you can board with a regular ticket or Suica and change midway through your trip. In my case, I boarded at Komagome and converted at Shinjuku.

Nishi Tokyo Bus serves the Okutama area. As is commonly the case in Japan, bus fares in low-density areas are notably higher than in the core areas of major cities. Frequency of service is also quite low, typically two or three per hour at most.

Fares vary by distance. You board buses at the rear and either tap your card on a sensor or take a small paper slip with a number indicating where you boarded. You exit from the front of the bus. If you used a card (Suica) when boarding, you tap your card again to pay the fare. If you took a numbered slip, you match the number with a digital display above the left front window and pay the fare indicated. 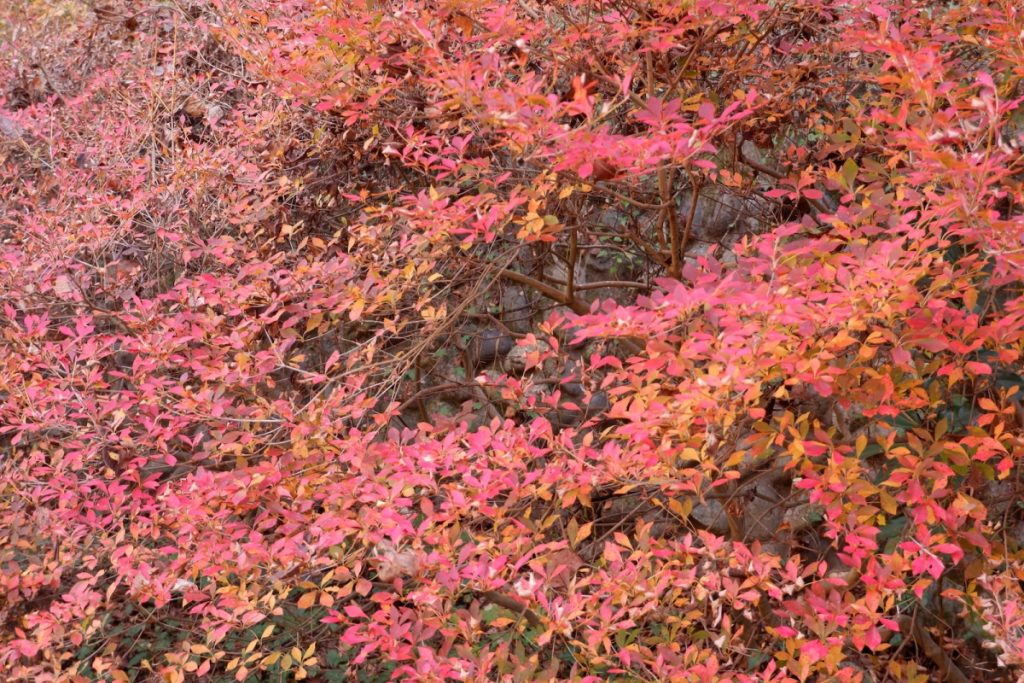 Various Japanese language sites dedicated to autumnal colors indicate that, as of November 18, we are just entering the peak period for mountain areas in the Kanto region. There should be one week, and probably two further weeks, of peak or near-peak viewing.

With due attention to COVID-19 precautions (wear masks, carry hand cleaner), now is a good time to explore the mountainous west side of Tokyo.