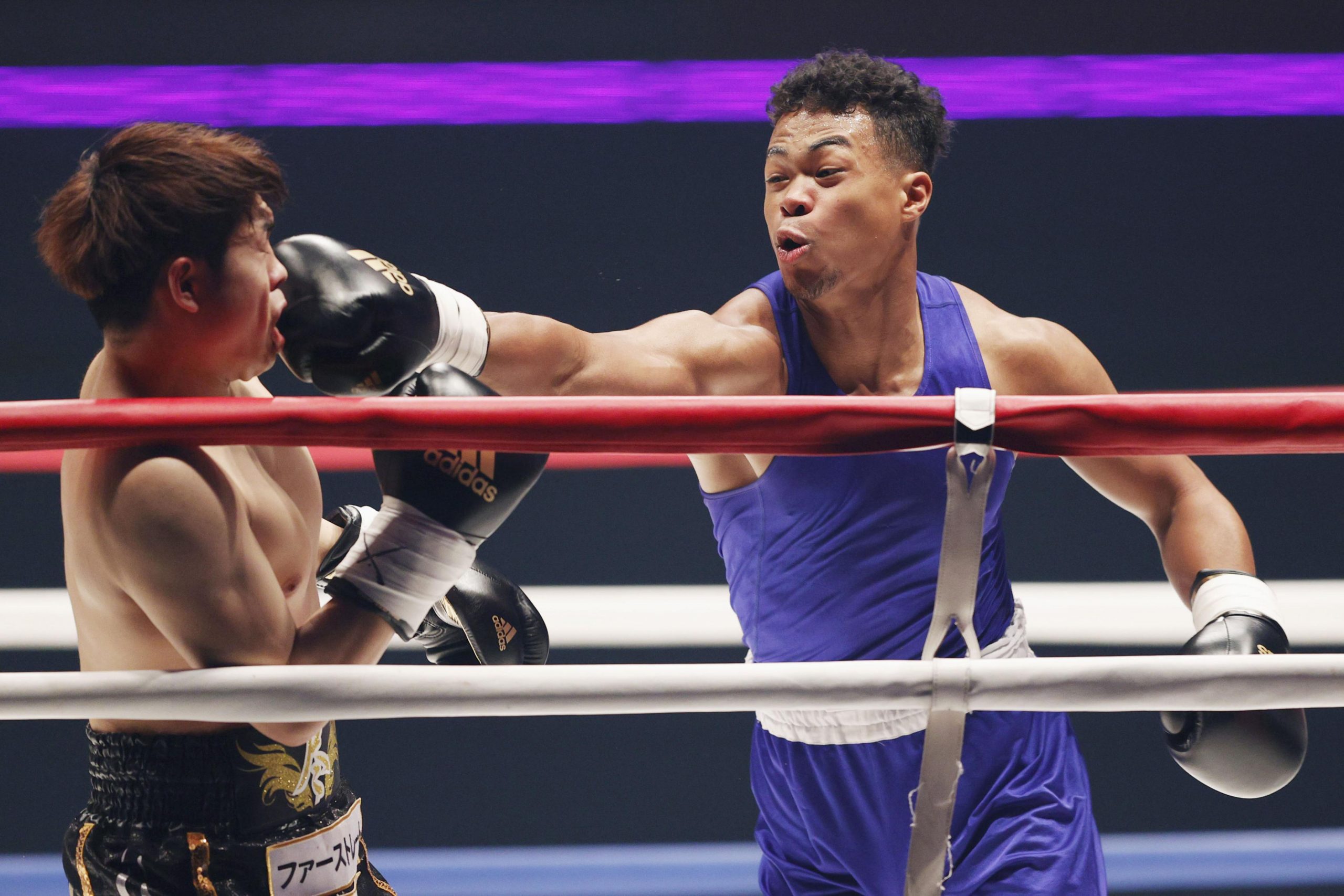 Japanese welterweight Sewon Okazawa would love nothing more than to win a gold medal at the Tokyo Olympics and bring some joy to his fans in a region of Japan that was devastated by torrential rains one year ago.

Born in Yamagata Prefecture to a Japanese mother and Ghanian father, the 25-year-old Okazawa has a record of 16 wins and three losses as an amateur fighter and is one of Japan’s medal hopes in boxing.

“The Olympics are a once-in-a-lifetime opportunity,” Okazawa said in a recent online interview. “I’m in good condition, I’m more excited than nervous. It’s important on such a big stage that a star emerges, and I want to put in that type of performance.”

Okazawa began his boxing career at the age of 16 in 2011 and claimed his first Japanese national title in 2018. He also competed in wrestling when he was a high school student.

He made a lasting impression on his fans and fellow boxers last year when he dedicated himself to repairing his gym in Kagoshima Prefecture, which was damaged by torrential rains.

In July of 2020, over 70 people in Japan’s southwestern prefecture on Kyushu island died in flooding and landslides. Over 75,000 residents of Kumamoto and Kagoshima prefectures were forced to evacuate.

Running machines at the gym in Kanoya, Kagoshima Prefecture, were damaged by extensive flooding. In addition to helping with the actual cleanup, Okazawa set up a crowdfunding campaign to raise money.

Okazawa’s success has come under the guidance of the gym’s head coach Shunya Aratake, who took the boxer in after he graduated from Chuo University.

Now, Okazawa said he wants to inspire the people of Kagoshima Prefecture with a strong performance in Tokyo.

Okazawa advanced to the final of the continental event and won a silver medal following a narrow loss to Uzbekistan’s Bobo-Usmon Baturov.

Boxing at the Tokyo Games will be contested at the famed Ryogoku Kokugikan Arena, which is the main venue for sumo wrestling in Japan.

World No. 1 welterweight and 2018 Commonwealth Games gold medalist McCormack will be Okazawa’s biggest rival in Tokyo. McCormack owns a 64-10 record (three knockouts) as an amateur fighter, so Okazawa will have his work cut out for him.

The men’s welterweight final is on Tuesday, August 3.

Boxing has been contested at every Summer Olympics since its introduction to the program at the 1904 Summer Games in St. Louis, Missouri. The 2008 Summer Games in Beijing were the last games with boxing as a male-only sport.

Since the 2012 London Games, women’s boxing has been part of the program. Boxing at the 2020 Games will be the most gender-equal competition ever, with two extra women’s weight divisions added to the program allowing 100 women to compete in Tokyo.

Japan’s Ryota Murata was one of the big stories of the London Olympics when he won the middleweight title to become only the second Japanese man to claim a gold medal in Olympic boxing. Takao Sakurai was the first, capturing the bantamweight title at the 1964 Tokyo Games. Japan has earned five medals, including three bronze, in Olympic competition over the years.

The International Olympic Committee in June 2019 ruled to keep the sport on the Games program after deciding to strip the International Boxing Association of its right to oversee the sport in Tokyo due to a series of scandals.

Unfortunately, not all the world’s best boxers will be competing in Tokyo.

Numerous qualifying events for boxing at the Games had to be canceled due to the coronavirus. Because of so many canceled qualifiers, rankings at tournaments, some of which took place as far back as 2017, were used to determine seedings to fill open slots.