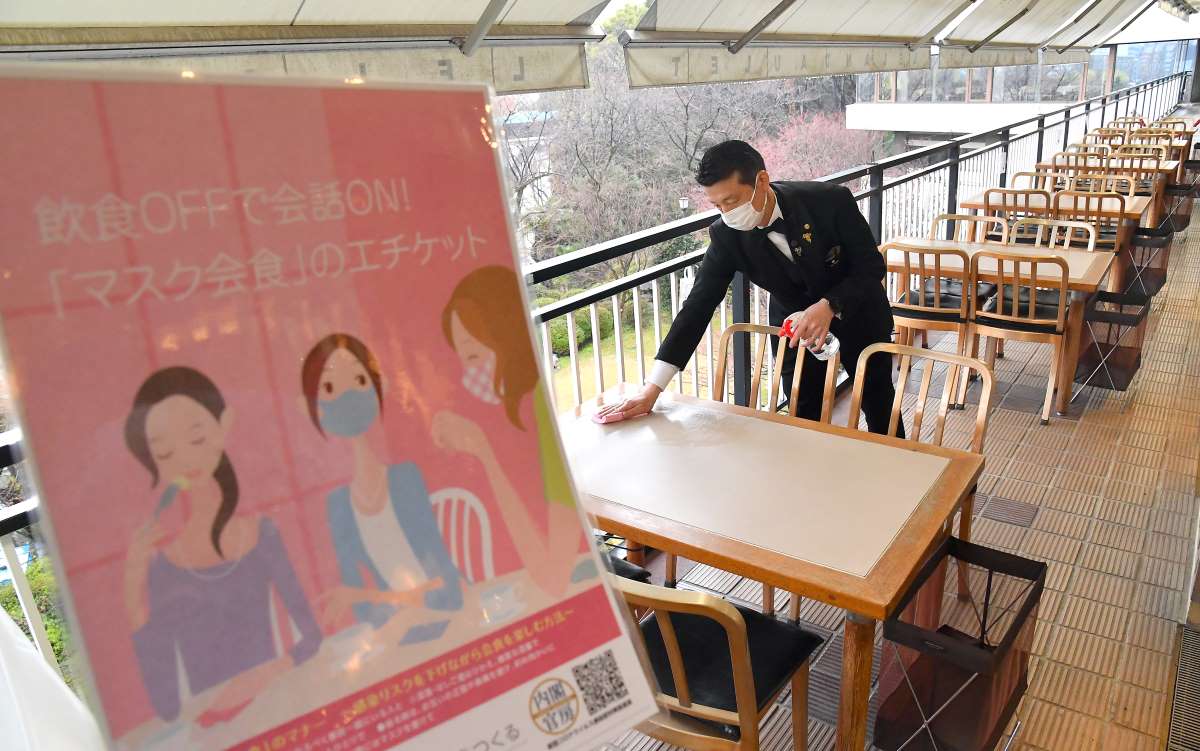 Caption: At the Ueno Seiyoken restaurant in the middle of Tokyo’s Ueno Park, you can see cherry blossoms from terrace seats or seats near the windows (photographed by Ikue Mio)

Ueno Park is one of Tokyo’s most famous cherry blossom spots. After the government lifted the quasi-state of emergency COVID-19 measures in Tokyo and 17 other prefectures, Ueno Zoo reopened its doors from March 23 to people who book in advance, and families are flocking there.

Restrictions were eased on March 21 when all remaining emergency measures were lifted. Since then, restaurants in Tokyo are able to stay open longer and serve alcoholic beverages. This comes at a potentially lucrative time when people traditionally gather to view cherry blossoms or hold farewell parties for friends and colleagues leaving for new postings.

Restaurants which suffered during the pandemic are hopeful at the prospect of doing business again. At the same time, they must come up with their own measures to prevent the spread of infection.

Despite the easing of restrictions, the Tokyo government remains cautious and is asking people to refrain from traditionally popular customs of the season such as eating and drinking under the cherry trees, or having boozy picnic parties in groups. Signs calling for self-restraint have been placed in the park, and ropes have been put around the cherry trees to prevent people from laying down picnic mats.

One such place is Ueno Seiyoken, a Western-style restaurant dating back to 1876 when the park first opened and became a fashionable meeting place. Here, terrace seats with a good view are popular during the cherry blossom viewing season. As its manager Hideo Akimoto explained: “The restaurant has been in a difficult situation for the past two years. It is good news that the government is lifting the emergency measures at a time when the number of visitors is likely to increase.”

Following the metropolitan government’s guidelines, the restaurant’s French food section was serving alcoholic beverages until 8 pm and closing at 9 pm. From March 22 the closing time remains unchanged, but alcoholic beverages are being served for 30 minutes longer so that “customers will be able to drink without worrying about time,” Mr. Akimoto said.

A Japanese restaurant near the park, Izuei Shinobazu-tei, is preparing dishes and lunch boxes that reflect the cherry blossom season in anticipation of more customers. Their business hours are keeping the 9 pm closing time, instead of extending hours to 10 pm as it was before the pandemic.

As its store manager Satoshi Maekawa explained , “the shorter hours were kept for such a long time that customers have got used to it and are going home earlier. Even if we stay open until later, not that many clients will come.”

Restaurants along the Meguro River, where about 800 sakura trees line the street for about 4 kilometers, are also counting on good business.

ZEAL Co. Ltd. in Minato Ward, which operates a cherry blossom viewing cruise on the Meguro River, is maintaining caution by reducing the number of seats from 44 to 28, and by allowing each guest to bring only up to 2 cans of alcoholic beverages. Still, reservations are said to have increased 1.5 times from the same period last year.

Ryo Katayama, who heads the Sightseeing Cruise Tourism Division, welcomed the lifting anti-covid restrictions in time for the cherry blossom season. “I am counting on seeing groups which we haven’t seen recently, “he said.

While the Tokyo Metropolitan Government is allowing businesses to operate longer hours, it continues to request cooperation for maintaining preventive measures, such as limiting the number of guests to 4 per table and staying up to 2 hours. Seita Okawa, the manager of Yakitori Akira, a grilled chicken restaurant with its main store in Nakameguro, however, questioned whether the authorities can enforce such requests.

Here, guests can view the double sakura blossoms through the restaurant window, so it’s not surprising that it is already fully booked up to mid April, the peak of the cherry blossom season. The last week of March is almost fully booked as well, with nearly 20 groups.

The restaurant will not limit the number of people for parties where the customers provide documents certifying that they are COVID-free, according to Mr. Okawa. But he added, “It is not realistic to check the certificates of the crowd, and I cannot refuse the reservation.”

Even as eating and drinking establishments try to regain some ground, they are feeling the pressure of soaring crude oil prices, and the concern that the burden will increase further due to the war in Ukraine.

“Because of the pandemic, the Tokyo government continues to ask for restraint. But I want to do my best to protect the lives of my employees, and feel that we need to fend for ourselves,” he said emphatically.