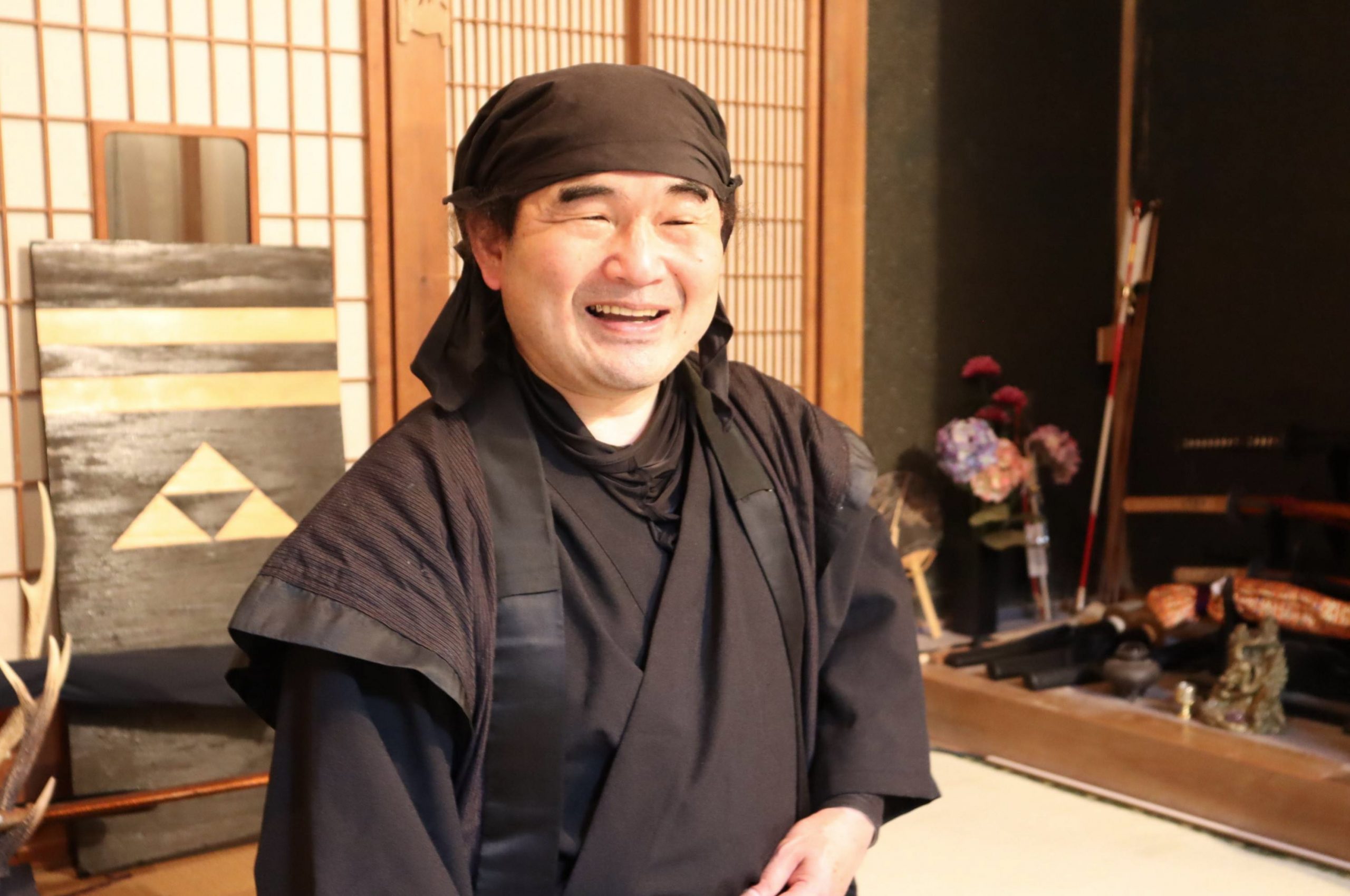 The ninja has been a popular subject of Japanese movies, period dramas, and manga. But it is also well known overseas.

Hiroshi Jinkawa, a 51-year-old residing in Akiruno, Tokyo, is the leader of Yanin, a group that offers ninja training programs for the outdoors. He cooperates with tourist associations in regions that have a connection with the ninja to teach children and inbound tourists about Japanese culture through the ninja.

His Ninjutsu Experience Program is a hands-on program in which Jinkawa carefully explains ninja skills and tools to the children while pretending to be a ninja himself. Wearing black from head to toe, he creates the illusion that a real ninja has traveled through time to the modern world.

When he organizes events for kindergartens or families, Jinkawa devises a variety of fun and educational activities, such as throwing shuriken (concealed hand blades) and interacting with nature.

A Turning Point in Jinkawa’s Life

Born in Osaka Prefecture, Jinkawa worked at an automobile manufacturer after graduating from university, then moved to a research company. He recalls a pivotal moment of his life when his boss told him, “From now on, you are a ninja.”

Although his boss’s words were supposed to be a mantra to encourage diligence in his research, they left a deep impact on him. “That was the first time I became a ninja,” he chuckles.

After working for the research company for five years, Jinkawa became independent and worked mainly as a risk manager and consultant for companies.

During this time, his mindset changed dramatically when he witnessed the Lehman Brothers’ collapse and the Great East Japan Earthquake. “In a rapidly changing world, we will need to think about management from a different perspective.” That was the starting point of his life as a “professional ninja.”

Trying to conceive a business idea that would leverage his management experience, he came up with the idea of outdoor educational activities. It fit his experience, and he had always enjoyed outdoor activities such as mountain climbing.

He developed the concept by drawing inspiration from the Boy Scouts, founded in England, and chose the theme of “ninja” as a way to expand the reach of his business from Japan to overseas. After preparing for a year, he began his current activities in 2013.

Currently, he works with the local community of Odawara, Kanagawa Prefecture, which was once home to the Hojo clan headquarters during the Warring States Period. He serves as a “full-time ninja” for the Kanagawa West Tourism Convention Bureau.

He also serves as a “Fuuma clan leader” for the Odawara Tourist Association, to raise interest in the historical Fuuma ninjas, who are said to have worked under the Hojo clan. Jinkawa chose the city of Akiruno as the base of his activities because it was once the front line of the Hojo clan’s power.

The Diversity of Japanese Culture

Jinkawa is involved in many other activities, including organizing monthly dōjō classes in Hachioji and participating in ecotours in Hinohara Village.

In recent years, some inbound tourists have taken part in his program. Often, these tourists are relatively older people who participate because they want to learn more about Japanese culture.

Jinkawa hopes to convey the Japanese culture of Wa, which encompasses the concept of diversity and is often translated into English as “harmony.”

Jinkawa says, “Even if you look at how we treat the environment, the Japanese have a strong belief that they should aim for “symbiosis” with nature. I think it’s meaningful to spread such values to the world.”

The COVID-19 pandemic has created a challenging situation for his hands-on programs, but Jinkawa has continued his efforts online.