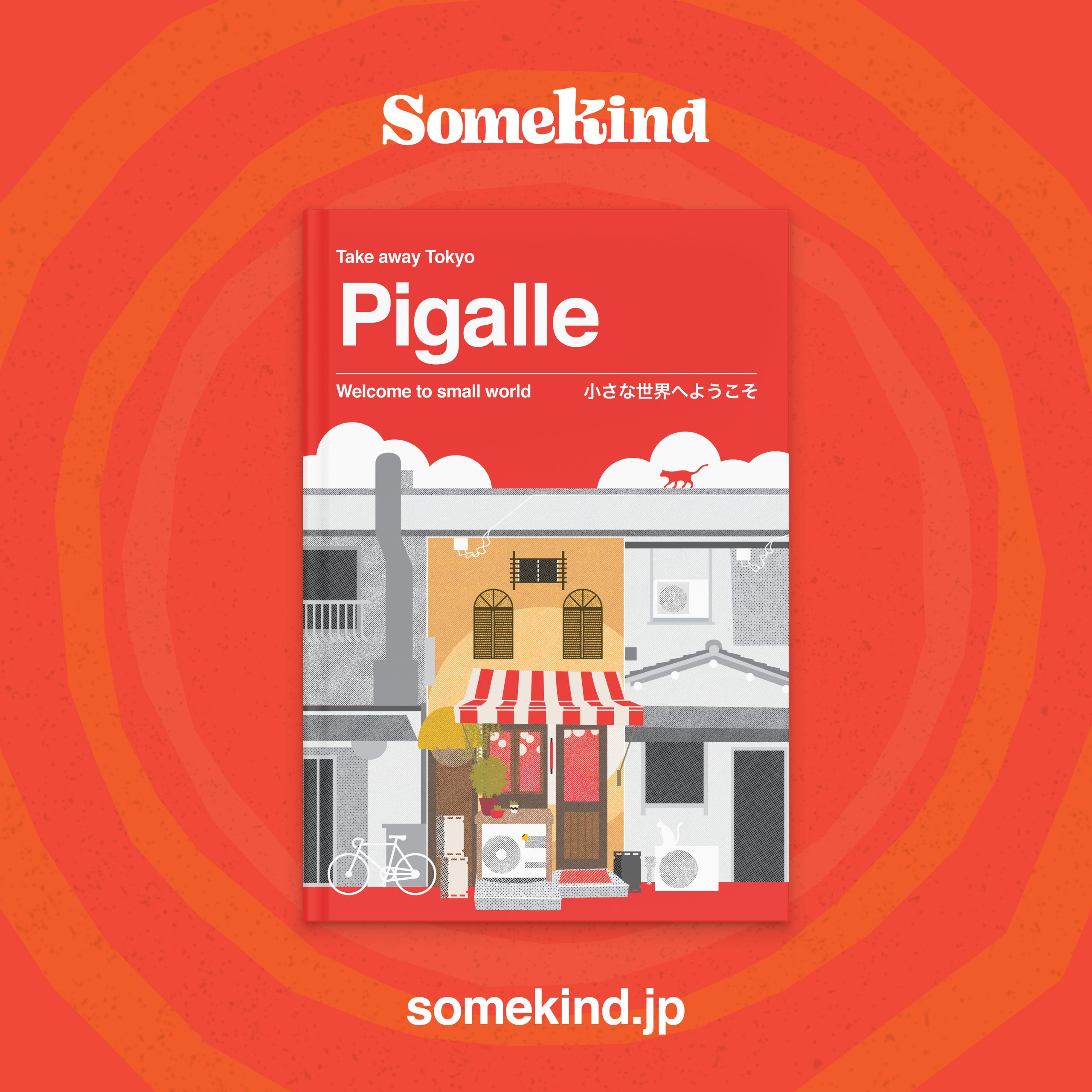 In the past year, COVID-19 has caused a sea change in Tokyo’s dining landscape. Record numbers of dining establishments have closed or gone out of business. Amid the confusion of ever-changing government directives on operating hours, the remaining establishments continue to struggle with subdued sales and fewer customers.

Pivoting to take-out services saved many virus-hit businesses during the early months of the pandemic. Indeed, takeout culture, once all but unheard of, has now become commonplace. Still, there’s only so much takeout you can eat to support your favorite restaurant.

But what if there was another way to help keep the restaurant industry afloat?

Founded in 2020 by Vaughan Mossop and Simon Davis, Somekind Press aims to support struggling businesses in the hospitality industry through their Take away series. It’s a simple concept: you pre-order a ¥2,200 JPY ($20 USD) bilingual book by the business― the first book in the Tokyo series is by Sangenjaya craft bar Pigalle, and the second is by bakery-cafe Bricolage bread & co. ― and if the title sells 100 copies within 10 days, the book will go to print. But if it doesn’t meet the funding goal, all the funds will be donated to the venue.

Each book is written by the chef or owner of a particular venue—your favourite suburban bakery, perhaps, or a charming little craft beer bar. And, unlike traditional publishing models where authors receive only a 10 percent share of the profits, the authors receive 40 percent. The rest of the funds go to cover the cost of publication.

The Tokyo series began with a serendipitous encounter: through an introduction by Australian food writer Lee Tran Lam, a friend of Zheng’s, the two editors had initially approached Somekind about publishing Appetite’s first print issue, but Mossop and Davis instead proposed that the two curate a Tokyo-centered series of books for them.

Initially, Zheng and Thompson imagined that the series would center around smaller, local venues, because they seemed to be the ones most in need. What they found, though, was quite different.

“We found that a lot of those business meals that would take place in higher-end restaurants aren’t happening because people aren’t meeting,” says Zheng. “But [the pandemic] is affecting all sorts of restaurants, whether you’re a Michelin-star restaurant or five-seater ramen shop. They’re just as much in need.”

The project wasn’t entirely without its hiccups: restaurant owners are usually busy, and the two found themselves taking a highly flexible approach to communication, fielding messages and emails from chefs across every social media app imaginable.

The two also found the language they used mattered.  For example, they were able to better communicate Somekind Press’s concept to venue owners by describing the works as books (bukku)  rather than hon (the formal name for book in Japanese).

“We were originally saying hon but we had to change that, because the image of a hon is something very polished and serious,” notes Jessie. “So we started to call them ‘book.’”

“The beauty of these books is that they’re lo-fi,” observes Thompson. “Even with a short production time, without illustrators or a photography team, you can make something really special. It really speaks to what people are looking for ― more authentic voices.”

The books themselves are relatively short ― around 100 pages each. And because the authors for each eating establishment have near-complete creative freedom over content, there’s no fixed format or structure. No two books are alike.

“There’s an opportunity for the restaurant to zoom in on one particular thing,” says Zheng, citing one restaurant in LA whose owner decided their book would focus on what they do with leftover bread. “If it's a bigger publisher, they probably wouldn’t do a book all about what they do with old bread. So, this is a really fun, creative thing.”

Pigalle is the first of 12 books in the Tokyo series, with each business being revealed as crowdfunding for the previous book ends. Pigalle has already been successfully funded, as has the second volume of Bricolage. Should the series meet with success, the hope is for Somekind Press to expand its reach to other parts of Japan.

“Getting extra revenue streams is an ongoing project,” says Thompson. “It’s not just a one-off project tied to the pandemic.”

Most importantly, they say, this initiative is for the community.

“These are places which have stories, a message that they want to share through their venue,” says Zheng. “This is a way for the community to stay inspired and have a way to support restaurants that they love.”

You can support the project by purchasing a book at Somekind Japan.