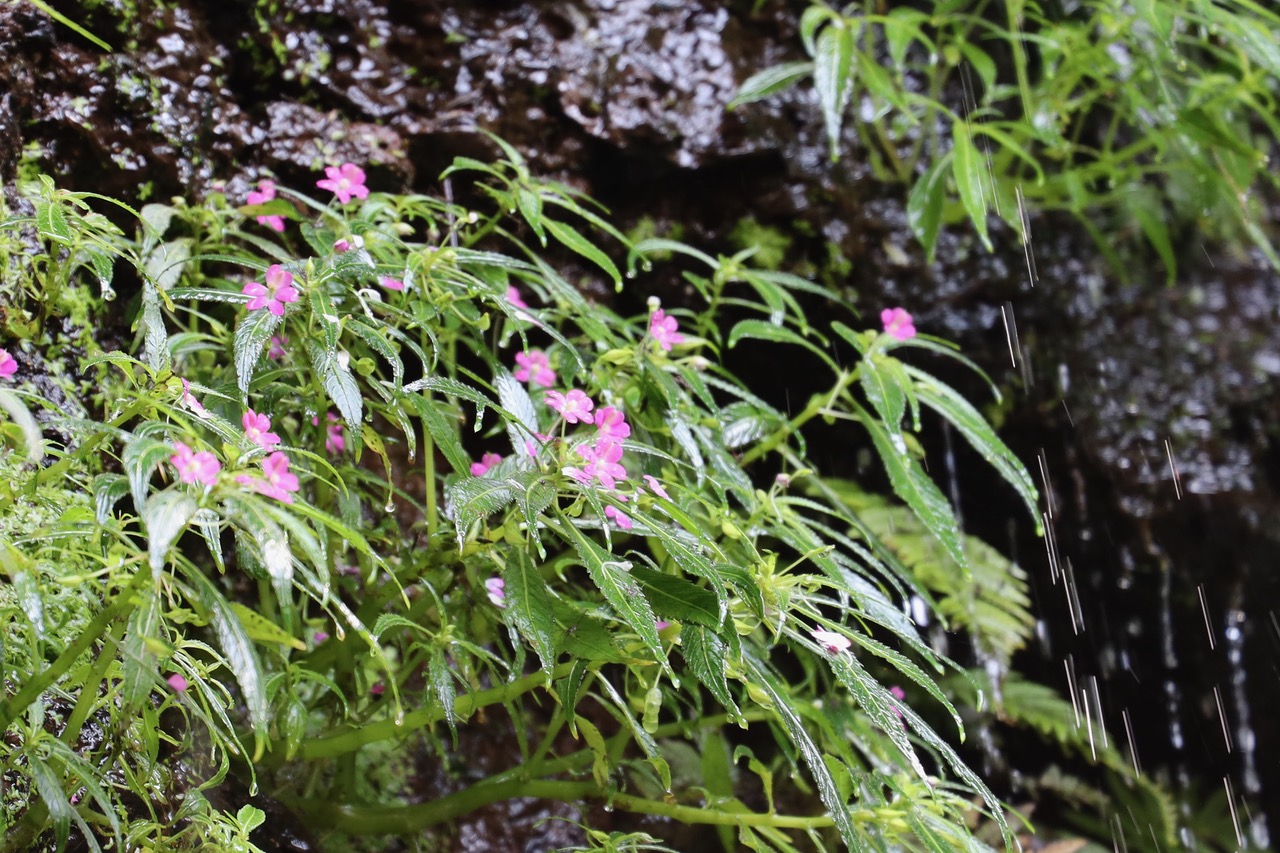 A new species of plant in the genus Impatiens discovered in Laos. Even plants with such beautiful flowers still have species left to be discovered.

In many areas where these tropical forests are located, socio-economic and cultural contexts wield considerable influence, and economic activities such as logging and agricultural land conversion are sometimes carried out without recognition of the importance of the forests. The result is that many areas are rapidly losing their tropical forests.

There is no doubt that Japanese consumers have been indirectly involved, and thus bear some responsibility for these far-off economic activities. This has caused us to deliberate on how we can do something to help using science and technology.

A research group led by Professor Tetsukazu Yahara (currently Professor at Kyushu Open University) and his colleagues at the Graduate School of Science, Kyushu University, has been conducting large-scale plant surveys in tropical forests throughout Southeast Asia for the past 10 years. Based on close international collaboration with local researchers, these surveys have been conducted at more than 160 locations in 12 countries to date, with over 40,000 plant specimens collected.

In fact, prior research on plants in this region cannot be termed adequate. Accordingly, these surveys have discovered a number of previously-unknown species.

Researchers estimate that, taken together, the surveys will reveal about 1,000 new species. This implies that a large number of plants have been there all along without us having any knowledge of their existence. By the same token, there have undoubtedly been many more plant species that have been lost, along with tropical forests, without their value or existence ever being known.

Technologies in DNA analysis, seemingly unrelated at first, have played a role in these plant surveys. In the Suyama Group at Tohoku University’s Graduate School of Agricultural Science, we are working to contribute to protecting tropical forests using an original state-of-the-art technology in DNA analysis.

Taxonomy, the study of distinguishing between species and determining which ones are new, requires long hours of specialized training, a high level of knowledge, and even a special sort of talent. In fact, even for some of the top researchers in the world in our group, recognizing unknown plant species is not an easy task.

This difficulty has been a major obstacle to date in the classification of plants in tropical forests. However, the latest technology in DNA analysis has emerged as a powerful helper.

By reading and comparing DNA, the genetic information of living organisms, it is possible to determine the genetic relationship between one organism and another. This technology, called “molecular phylogenetic classification,” can be used to objectively identify species that are otherwise difficult to distinguish by shape alone. With any luck, new, previously unknown species can be discovered.

The basic technology for using DNA information to identify species has been in use for many years. However, it was difficult for the technology to distinguish between species that are closely related, leaving scientists with “an itch that can’t be scratched”.

This is where a new analytical method developed in Japan using “next generation sequencing technology” comes in. This method, called MIG-seq, has proven to be remarkably faster, cheaper, easier, and more accurate than ever before, and has been able to identify a series of mystery species. We are now using this approach to analyze samples from tropical forests in Southeast Asia, generating a number of new findings.

The Value of Discovering New Species

It goes without saying that there is great academic value in discovering new plant species. However, our project is focused on going beyond this type of value. In other words, we are working to properly assess the biological value of this region’s forests through the discovery of new species in tropical forests. The idea is that a proper assessment will help to protect the tropical forests.

When a new species is found in a certain place, the site takes on a new value as the only place in the world where that species is known to exist. Moreover, the value that can be generated directly or indirectly from a plant species, for example, through the discovery of a high industrial value of its components, is limitless.

Even if a plant does not produce direct economic value for humans, it certainly has a role to play in the complex relationships among living organisms as a member of the ecosystem. The value of new species discovery lies in the discovery of unknown potential and roles.

For a Prosperous Future

The loss of tropical forests would not only threaten the survival of endangered species such as orangutans, and exacerbate global warming. The latent value of all living things that live in the forests, and even their respective roles in the ecosystem, would be lost. This would be nothing short of squandering our prosperous future.

With this latest DNA technology, we are aiming for a prosperous future for the world, both for ourselves for the entire ecosystem.

In order to fulfill Japan’s responsibility in Asia, we are working diligently to accurately assess the biodiversity of the tropical forests of our neighbors in Southeast Asia. We hope that our technology will contribute to the realization of a prosperous future on as many fronts as possible.

Dr. Suyama is a professor at the Graduate School of Agricultural Science, Tohoku University.