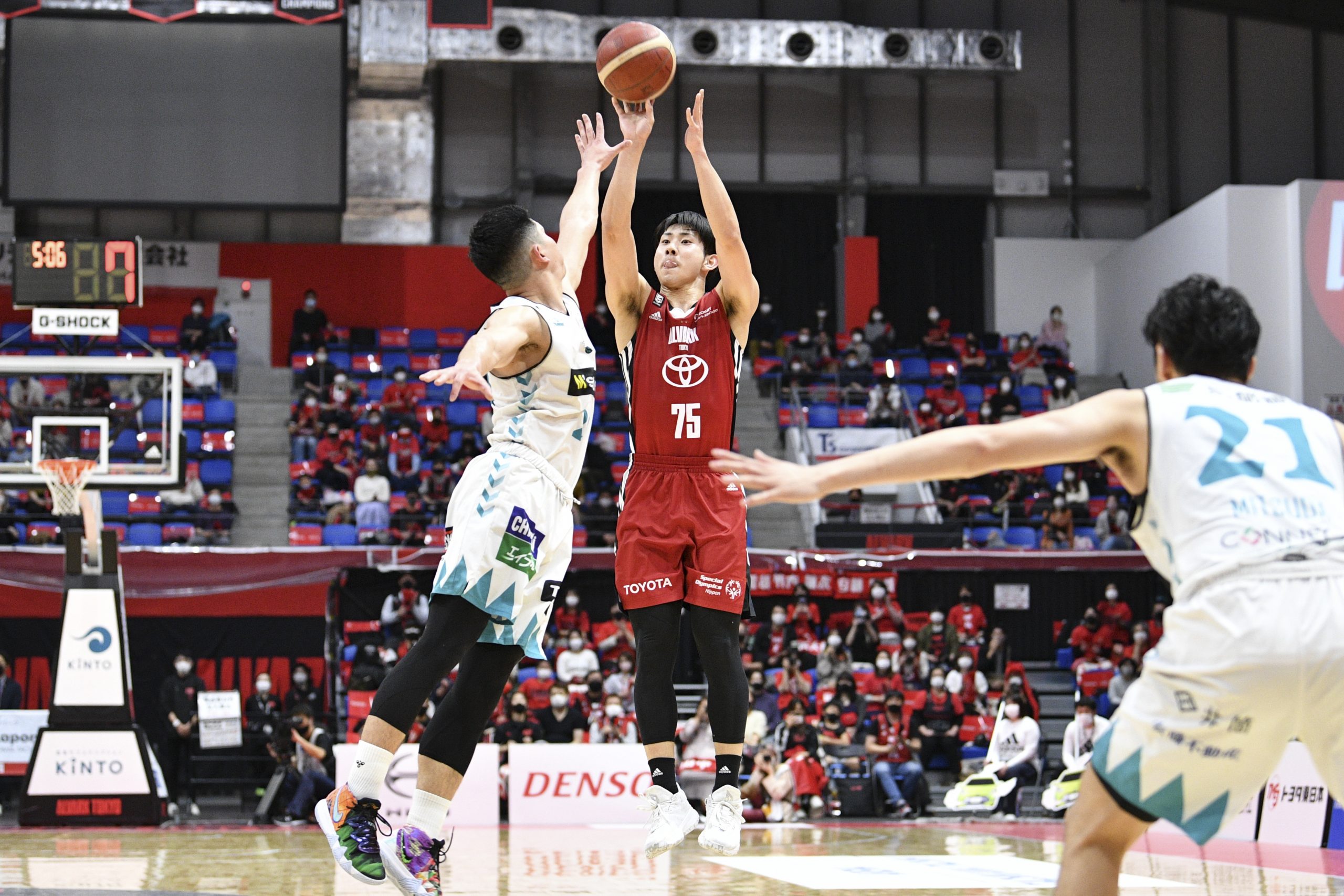 Alvark Tokyo shooting guard Taiki Osakabe in action against the Kyoto Hannaryz on March 21 in Tachikawa. (B. League)

Five teams are in the hunt for the B. League's two wild-card playoff spots to complete the eight-team postseason field.

Jockeying for playoff position, the Sunrockers Shibuya and Toyama Grouses (both with 28-17 records), Alvark Tokyo and Nagoya Diamond Dolphins (both at 26-18) and the Akita Northern Happinets (25-19) are far from finished in the 60-game season.  Ahead of this ambitious quintet are six teams, all of whom would be in the playoffs if postseason play began today. The six are: Osaka Evessa (27-18), SeaHorses Mikawa (29-16), Kawasaki Brave Thunders (30-15), Chiba Jets (33-11), Ryukyu Golden Kings (34-10) and Utsunomiya Brex (36-8).

And who's the next-closest team in the wild-card chase? The Shimane Susanoo Magic (17-28).

Of the five wild-card contenders cited above, the Sunrockers have impressed the most of late, riding a three-game win streak into the next slate of games on Wednesday, March 24, when all 20 first-division teams will be in action.

In Tachikawa, veteran center David Simon scored a season-high 37 points to lead the Kyoto Hannaryz to a 93-89 victory over the Alvark on Sunday, March 21.

Simon, who played college ball at  Indiana University–Purdue University Fort Wayne, was a potent offensive force in the series finale, making 16 of 21 shots from the field against short-handed Tokyo. The 38-year-old's previous season-best scoring output was 35 points against the SeaHorses Mikawa on October 21.

In the second half, Simon was 10-for-10 from the floor and scored 24 points, including 14 in the third quarter.

With Simon setting the tone on offense, the Alvark, who led 43-37 at halftime, faced a 72-62 deficit entering the final period.

Alvark coach Luka Pavicevic acknowledged his team's defensive shortcomings while speaking to reporters after the game.

"In the third quarter our defense became loose and we lost our concentration, so we couldn't control the score [against] Kyoto," Pavicevic said. "However, we clung to Kyoto, aiming for a comeback until the end of the fourth quarter, but we could not win."

The Alvark trailed 88-80 after Simon nailed a nifty turnaround jumper with 2:50 remaining in the game.

After Thomas missed a jumper, Osakabe grabbed an offensive rebound, giving the Alvark another opportunity to score. Kojima then pulled the hosts within five on a catch-and-shoot 3-pointer with 2:27 to play.

Moments later, Thomas buried a jumper to cut the lead to 89-87.

Kyoto answered with a key play on the other end, with Rice stretching the advantage back to four on a layup.

With 32 seconds remaining, Osakabe was then rewarded with a trip to the foul line on a drive to the basket. He canned two free throws to pull the Alvark within 91-89.

Simon, who had the hot hand throughout the second half, was the go-to player on the Hannaryz's next possession. They ran their offensive set for him, and Simon set up shop, got in his comfort zone and sank his patented fadeaway jumper with 11 seconds left on the game clock to account for the game's final score.

Osakabe missed a 3-pointer before the final buzzer.

The Alvark are currently missing two franchise cornerstone players in center Alex Kirk and shooting guard Daiki Tanaka, both of whom are coping with injuries.

Kirk, one of the league's premier big men, is averaging 17.1 points, 9.7 rebounds, 1.5 assists and 1.0 blocks in 35 games. He has been sidelined since playing against the Chiba Jets on February 10, a game in which he had 13 points and 10 rebounds.

The University of New Mexico alum was diagnosed with a lumbar disc lateral hernia. The 29-year-old was placed on the league's injury list on March 15 and is ineligible to play for 30 days.

Tanaka, the B. League's 2019-20 MVP, sustained a calf muscle injury in his right leg in Tokyo's February 27 game against the Nagoya Diamond Dolphins. He's also expected to be sidelined for a month. Tanaka, 29, is averaging 10.6 points, 4.8 assists and 1.0 steals in 31 games.

Without Kirk and Tanaka in the lineup, Pavicevic is looking for other players to step up and fill the void. For instance, 22-year-old shooting guard Osakabe has been pressed into action and given more playing time.

Osakabe scored a season-best 19 points on March 7 against the Sunrockers. He's scored in double figures in six of the past seven games, including a 17-point effort against Nagoya on February 27. The Kanagawa Prefecture native is averaging 7.5 points in 27 games (six starts). In the abbreviated 2019-20 campaign, Osakabe appeared in eight games and made his pro debut on January 5, 2020.

Blessed with speed, athleticism, good jumping ability and youthful exuberance, Osakabe is quickly becoming one of the more popular young players among the B. League's Tokyo area teams.


Updates on Other Wild-Card Contenders

Jordan Heath finished with 17 points and 10 rebounds and Yuma Fujii added 10 points for the Brave Thunders (30-15), who won the All-Japan Men's Basketball Championship, also known as the Emperor's Cup, on March 13.

In the series opener, Justin Burrell had 19 points and eight rebounds to lead Nagoya to an 84-75 triumph on March 20.

Satoru Maeta chipped in with 14 points and five rebounds for the Grouses. The dynamic small forward knocked down 4 of 8 3-point shots.

For the Lakestars (16-28), Jordan Hamilton produced a triple-double with 20 points, 11 boards and 10 assists along with three steals. Teammate Kevin Hareyama had 18 points.

The Grouses won the opener 97-95, with Hamilton's 43-point-output leading the way.

Kosuke Ishii netted 16 points for the Sunrockers in Nagaoka, Niigata Prefecture. Floor leader Leo Vendrame dished out eight assists and 21-year-old newcomer Yo Nishino, appearing in his 10th game, scored 10 points on 4-for-5 shooting and snared four rebounds in 10-plus productive minutes.

Kei Igarashi and Jason Washburn had 15 points apiece for the struggling Albirex (13-31) who finished with 15 assists and 20 turnovers.

Shibuya hammered the hosts 100-77 on the previous day.

San-en jumped out to a 23-9 lead by the end of the first quarter and held on for an 80-73 home victory over Akita on Sunday in Toyohashi, Aichi Prefecture.