Don’t be Fooled by Their Strange Looks, There is More to Yokai Than You Think!

Above: woodblock print (ukiyo-e) of a yokai called Gashadokuro (餓者髑髏) or starving skeleton by Utagawa Kuniyoshi. 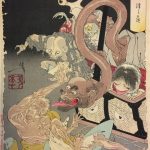 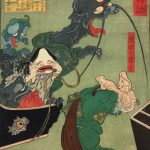 Yokai are part of Japan's long culture and arts history

If you are living in Japan or just interested in Japanese culture, you will at some point come across supernatural beings called Yokai (妖怪). Whether as a small statue in front of a shop, as cute characters on warning signs or strange looking things on traditional woodblock printings, Yokai can be found in many different kinds and forms all over Japan. Especially in Japanese pop culture like movies, video games or manga/anime, Yokai appear frequently. The first time I heard the term Yokai was when I visited Kurama mountain in Kyoto and saw the huge red statue of a strange long nosed creature called Tengu (天狗). The weird looking face of that creature sparked my interest in these supernatural creatures and I soon realized how widely Yokai are featured in everyday Japanese life.

But what are Yokai exactly?

One interesting thing about Yokai is that it is hard to define what they really are. A common translation is “Japanese monsters”, which does not fully cover the whole nature of Yokai. Like other Japanese concepts which exceed single definitions—for example, the term Manga includes more than just “Japanese comic book”—it is quite difficult to find a simple translation. Basically, Yokai are a certain type of supernatural creatures within Japanese folklore, which come in many different shapes and forms. Some look more like humans, some are more animal or plant-like, some are even shaped as objects, like furniture or everyday tools, and some just cover strange phenomena. Yokai are a part of the polytheistic worldview predominant in Japan, but are not religious in nature and not worshipped. Despite their heterogeneity, Yokai can be distinguished from other mythical creatures.

Although some could be regarded as ghosts, Yokai are different from another type of supernatural beings called Yurei (幽霊), a term which covers former living individuals who became ghosts. The line can be a bit blurred, the rule of thumb for knowing the difference is said to be that Yokai can be regarded more of a general “thing”, while Yurei are/were an individual with a name.

Furthermore, gigantic, city crushing monsters like Godzilla are called Kaiju (怪獣) and are generally not considered to be Yokai, although they might have been inspired by them.

Yokai have a very long tradition in Japan, and folktales of Yokai have been spread and passed on through word of mouth and scriptures for ages. The modern images of Yokai can, to a large part, be traced down to an important writer/artist in the Edo period, Toriyama Sekien, who published a variety of books on Yokai, classifying and picturing different types from all over Japan. In a time when more and more Japanese people had access to written materials and due to their unusual content, these books quickly became famous and sparked the first wave of Yokai popularity in Japan. Had the knowledge of the Japanese on Yokai been mostly limited to the legends of their own local place, which varied greatly from region to region, Sekiens classifications summarized various Yokai and made these local legends accessible for a wider audience.

A large part of today’s popularity of Yokai was caused in the 1960s by the manga “GeGeGe no Kitaro”, made by the manga artist Shigeru Mizuki. This manga series is widely known in Japan and if a Japanese is asked a question about Yokai, it is highly likely that GeGeGe no Kitaro will be mentioned in the answer.

By now presenting one of the most famous Yokai, the Kappa (河童), I want to illustrate where Yokai can be found in today’s Japanese society The Kappa is a reptile/amphibian looking creature which inhabits lakes and rivers. You might have heard that name in the context of sushi before, where kappa maki refers to a sushi roll filled with cucumber. This is actually due to the ascribed love of the kappa for cucumber. Although said to be sometimes helpful to humans, Kappa are mostly considered to be very dangerous. They prey on people swimming or bathing in larger bodies of water to drown and eat them, or for even worse things. Therefore, they have been incorporated in stories to make children aware of drowning and can be seen on warning signs near lakes and rivers.

Outside of Japan, the word kappa also refers to a very popular emoticon coming from and mainly used on the game-streaming website twitch. It consists of the smirking face of a former employee and is basically used to express irony or sarcasm. The former employee who created that emoticon was a big fan of Japanese mythology and named it after the Kappa, spreading its name all over the internet.

What makes Yokai so interesting for me is their huge variety in appearance and abilities. There are countless stories behind these creatures and theories of Yokai are filling many books. Some Yokai are based on animals or human characteristics, some are expressions of fear or inexplicability of natural events and some just developed out of old folk stories and became a thing on their own. Over the centuries Yokai have transformed from mystical creatures from all over Japan and beyond to a pop cultural phenomenon, being commonly featured in manga or video games.

As part of the diverse polytheistic worldview deeply entrenched in Japan, the often strange looking Yokai are one reason why Japans mythology and culture is so intriguing for foreigners. The creative potential in such a diverse body of mythology is one cornerstone of what makes Japanese culture “cool” today. It is fun learning about Japans past through horror stories and references of Yokai can be found all over Japan. Whether on your sushi plate, when watching anime or when swimming in a river, a Yokai encounter could happen anytime, so better watch out!