‘Ebizo Kabuki’: How a Clubhouse Chat Evolved into a New Theatrical Production 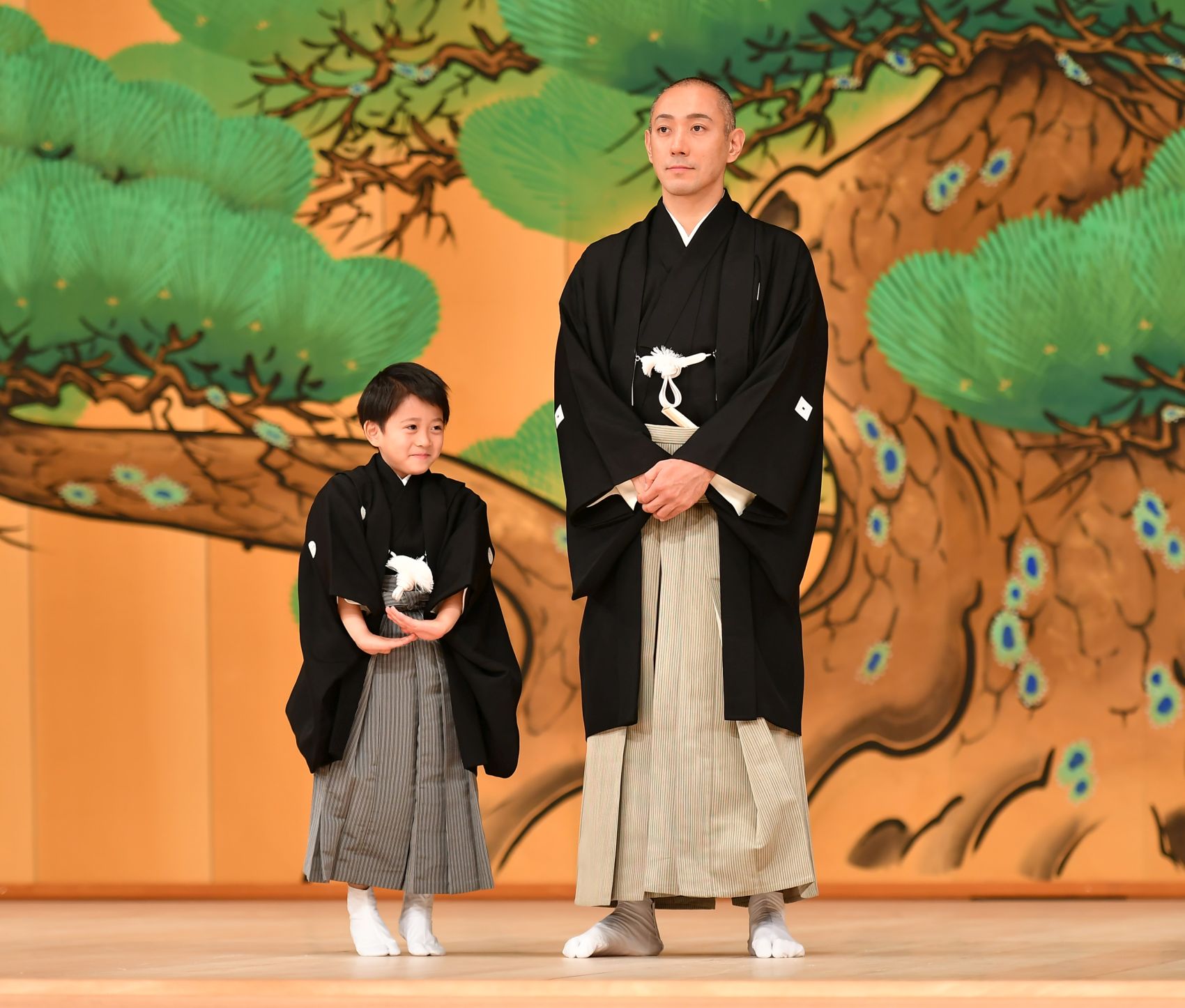 Ebizo is shown here with his son Horikoshi Kangen in 2019. Kangen is now 8 years old.

Kabuki star Ebizo Ichikawa, 43, has put together a new show called Ebizo Kabuki, performing at the Meijiza Theater in Tokyo’s Nihonbashi district on May 29 and 30, and at the Minamiza Theater in Kyoto from June 4 to 13.

In a performance that transcends place and time, it first tells the Sanemori story, part of the epic tale of the struggle between the Heike family and Minamoto Genji clan for control of Japan at the end of the 12th century.

Then, in the second part, it unfolds into “KABUKU,” a new kabuki dance designed by incorporating some of the views and ideas exchanged on the popular social media platform, Clubhouse.

The new work KABUKU is a group dance of the type popular in the late Edo period. It incorporates the theme of Ee jyanai ka, which generally means, “Hey come on, it’s okay!” It tells the story of a block print salesman who becomes rich when he gets hold of tickets for the Ise Shrine pilgrimage.

The idea for this new production started with an exchange on the Clubhouse platform.

“I want to see Ebizo perform kabuki at the Shibuya scramble,” said one participant. And someone listened. The story is set in present-day Shibuya, the popular Tokyo neighborhood known for its scramble intersection, and is juxtaposed in a timeless frame with the Rakuchu (inner Kyoto) district of the Edo era.

Those listening in on the Clubhouse exchange got an insider’s peek into the process of fleshing out a theatrical production, from beginning to end.

“This way I can hear the unfiltered ideas of other voices, and there is the advantage that I can decide ‘yes’ or ‘no’ immediately. I thought it would be possible to create a new kabuki production using ‘process economy,’ developing the production itself through a business process,” Ebizo said.

“For the audience to actually experience how a play gets from a concept to the reality of the first day’s performance is something special that is only possible in this era,” he added.

This could open up new possibilities and production methods for traditional performing arts, he said. “One of the goals of the project is to make Japanese culture accessible in a way that people around the world can enjoy.”

Co-starring the Naritaya Parent and Child

As the Sanemori story unfolds over the Genji clan’s white flag, the Heike clan is in power. Ebizo plays Saito Sanemori, Heike’s military commander, and Ebizo’s son Horikoshi Kangen, 8, takes the role of a boy, Tarokichi. It is the first time in 34 years to see the Naritaya family tradition of having father and son act together. The last time was when Ebizo played the boy’s part alongside his own father, the then-12th generation Ichikawa Danjuro in 1987.

In the story, Sanemori pretends to be a Heike clansman, even though he really belongs to the Genji clan. Thanks to this strategy, he escapes from the trouble he finds himself in.

Commenting on the appeal of the story Ebizo said, “It’s the game of life, more difficult than walking the tightrope. It’s dramatic and shows Sanemori at his best intellectually, including his cool-headed handling of predicaments. That’s it.”

As for performing with his son Kangen, Ebizo said, “He is just barely young enough to play Tarokichi’s part. This will be the last time because he is quickly growing tall,” he said.

“It was a deeply memorable role for me when I performed with my father,” Ebizo added. “I think it’s a big role for a child, but one that leaves you with a lot of memories. So I’m happy to be able to experience it with him.”

This will be Kangen’s first appearance at the Minamiza Theatre in Kyoto. “Near the Kamo River, there is a bronze statue of Izumo no Okuni, who is said to have started kabuki. Minamiza is in front of it, so I would like to talk about this with my son,” Ebizo said with a smile.

More information on the performance can be found here.

(Clubhouse is an invitation-only social media app for iOS and Android where users can communicate in voice-only chat rooms that accommodate up to 5,000 people. The app hosts live discussions, with opportunities to participate through speaking and listening.)