EDITORIAL: Japan-U.S. Summit Should Be a Wake-up Call to Kim Jong-un on Abduction Issue 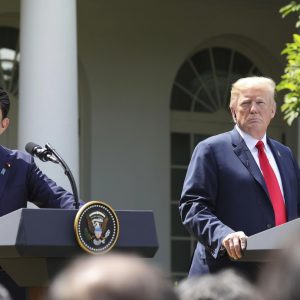 On the afternoon of June 7—predawn on June 8, Japan time—Prime Minister Shinzo Abe and United States President Donald Trump held talks at the White House in Washington, DC, to discuss the outlook for the June 12 U.S.–North Korea Summit.

At a joint press conference following the meeting, President Trump referred to the issue of North Korea’s abduction of Japanese citizens and stated that Prime Minister Abe had “talked about it long and hard and passionately.” The American President added, “We will be discussing that with North Korea, absolutely.”

Securing such a strongly-worded statement on the abduction issue from President Trump, who is due to meet with North Korean Leader Kim Jong-un on Tuesday, June 12, represents a major achievement out of this Japan-U.S. summit.

The Japan-U.S. partnership sends Chairman Kim a wake-up call, letting him know that any bright future for North Korea will have to include the resolution of the abductions.

Diplomats and the victims’ families should share in the credits for having the issue taken to the Singapore talks. Their unceasing efforts have kept the spotlight on the importance of the abduction issue.

Prime Minister Abe also asserted his wish to meet North Korea’s leader directly, face-to-face, “and talk with them so that the abduction problem [can be] resolved quickly.” This reveals his desire for a Japan-North Korea summit on the issue. The lives of Japanese nationals must be protected by the Japanese government, so Mr. Abe’s determination is a given.

However, caution is also required. There has been no concrete outcome yet from the recent international engagement with Pyongyang. North Korea has not altered its previous stance on the Japanese abductions, namely that the issue has already been settled.

This is the moment of truth.

Mr. Abe has referred to his readiness to offer economic cooperation and “normalize [the] diplomatic relationship” under the 2002 Japan-North Korea Pyongyang Declaration, hinged upon the resolution of the abductions. North Korea knows that removal of economic sanctions, along with denuclearization, alone, will not lead to its stability over the mid- and long-term. Economic cooperation from Japan is what it truly craves.

The return of all abduction victims is imperative before this can happen. North Korea must recognize that there will be no support from Japan without it.

The leaders of Japan and the U.S. should be applauded for their agreement to maintain sanctions and pressure on North Korea until it has denuclearized. They confirmed the need for continuing enforcement of sanctions under the UN Security Council resolutions while seeking total abandonment of North Korea’s weapons of mass destruction and ballistic missiles of all ranges, including nuclear weapons.

The possibility of signing some sort of agreement to end the Korean War was also brought up by President Trump. He must be careful not to undermine the deterrent power of U.S. forces in South Korea.

If the two leaders stand up for the principles they have agreed upon, they will contribute all the more to the removal of the North Korean threat and the release of the abduction victims.

At the same time, by heeding these principles, they can also avoid seeing the negotiations with North Korea turn into a mere dialogue for the sake of dialogue.