Editorial | U.S. Mediation Changes the Face of the Middle East, But More Should Be Done

Israel and the United Arab Emirates (UAE) announced on August 13 that they were establishing full diplomatic relations in a deal brokered by the United States.

In return for recognition of Israel as a state, the UAE secured a promise that Israel would suspend plans for annexation of occupied territory with Jewish settlements on the West Bank of the Jordan River.

Since its establishment as an independent nation in 1948, Israel has fought four wars with various Arab countries. The UAE will be the third Arab country to establish diplomatic relations with the Jewish state. Egypt did so in 1979, followed by Jordan in 1994. Washington deserves congratulations for bringing the two sides together.

The Israel-UAE agreement is significant in that it will bolster the “containment of Iran” strategy being championed by the United States. As a result of its nuclear development program and its provision of assistance to pro-Iranian groups in nearby countries, Tehran’s influence in the region has been increasing. This has led to a growing recognition among Mideast countries concerning the threat that Iran poses to the region.

If Saudi Arabia and other Gulf nations that are at loggerheads with Iran decide to follow the UAE’s lead, that could represent a turning point in the power relationships in the Mideast region.

Since Japan relies on the Middle East for 90% of its crude oil imports, it must continue to pay careful attention to changes in the situation.

One thing we need to bear in mind is the one-sided nature of this development. It has in fact created a new destabilizing factor. Our greatest concern remains the lack of progress in peace negotiations between Israel and the Palestinians.

Previously, the Arab countries had shared a common understanding that the establishment of diplomatic relations with Israel should be contingent upon the creation of a Palestinian state under a “two-state” framework. 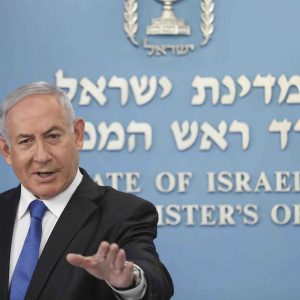 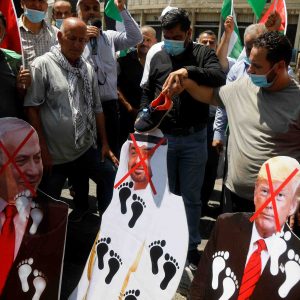 Actually, Israel’s announcement of suspension of the execution of its plan to annex the West Bank settlements should be seen as a positive move stemming from the agreement. At least one source of conflict in the Middle East has been dampened.

Nevertheless, it should not be forgotten that any move by Israel to annex occupied territories would be a violation of international law. Most nations oppose the annexation plan and have demanded that it be withdrawn.

Against that background, there is a danger that the agreement between Israel and the UAE will cause the ongoing stagnation in the Israel-Palestinian talks to become set in stone. If the Palestinian people become further isolated, and extremist elements become more active, that would surely raise the risk of terrorism and military confrontation.

Already the Middle East is embroiled in a number of crises, including civil wars in Syria and Yemen. The Israel-UAE agreement is not likely to alter these conditions, but hopefully it will help stabilize things.

U.S. President Donald Trump went so far as to say that the agreement meant that the United States no longer needs to remain in the Middle East. However, on that score he is mistaken. In order for the region to achieve stability, a continued American presence, including a military presence, is absolutely vital.

But, more than anything else, Washington needs to act as a good-faith mediator for peace negotiations between Israel and the Palestinians.