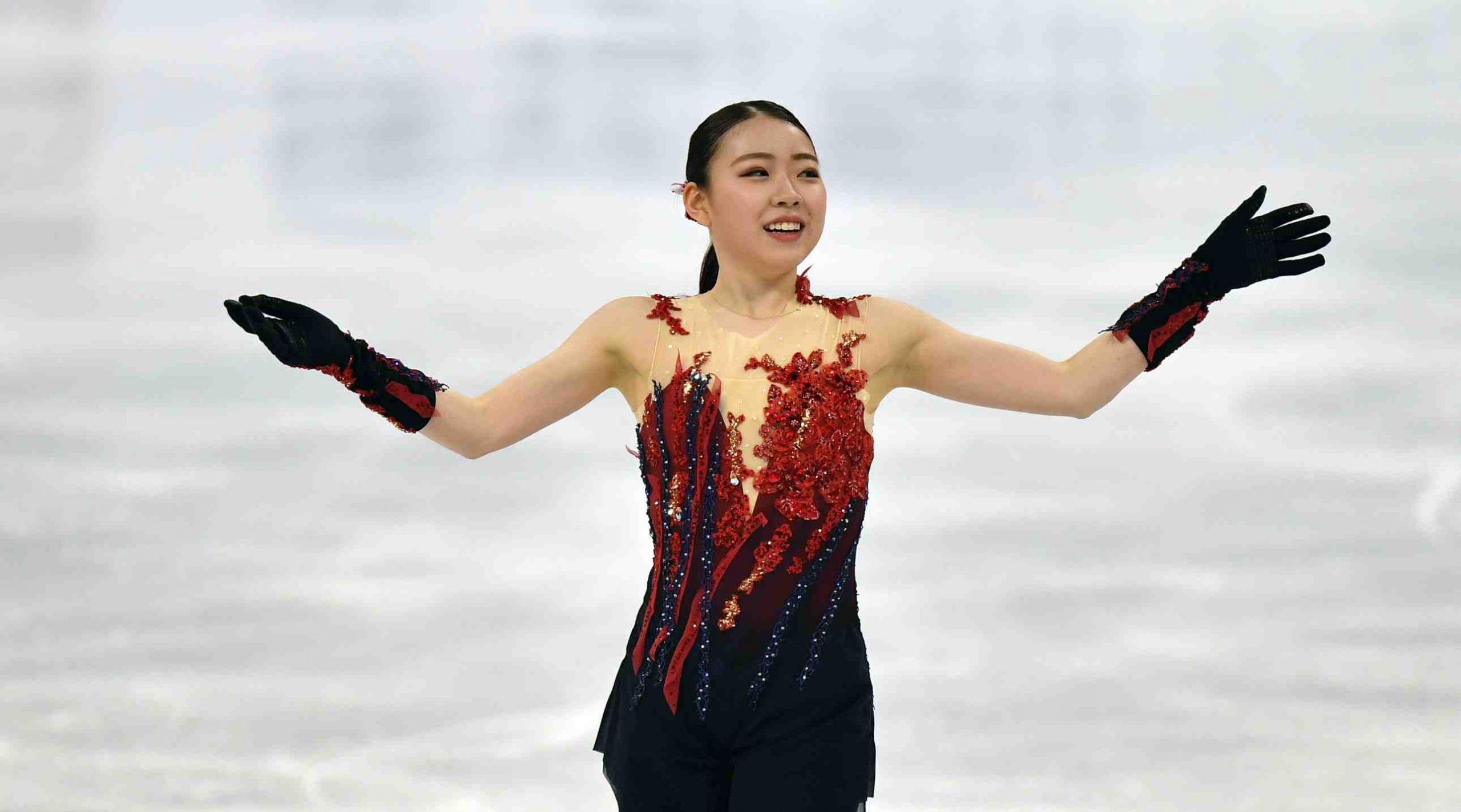 Rika Kihira is in contention for a medal at the ongoing World Figure Skating Championships in Stockholm. (Martin Meissner/AP)

Rika Kihira is in second place after the women’s short program at the world championships in Stockholm on Wednesday night, March 24. The two-time Japan champion trails leader Anna Shcherbakova of Russia by just under two points heading into Friday’s free skate at Ericsson Globe and is in good position to earn her first senior world medal.

Kihira skated to “The Fire Within” in a red and black costume and put on a solid show in scoring 79.08 points that included a one-handed cartwheel. She opened with a triple axel landed on the quarter, then landed on the quarter again on the back end of her triple flip/triple toe loop combination jump, before hitting a clean triple lutz.

The 18-year-old Kihira received level fours for her spins and step sequence.

“This was the first time to skate in the worlds without fans. Despite that it felt like a normal tournament to me,” Kihira stated of the event being staged without spectators. “I tried to concentrate and succeeded.”

Kihira said the past few months have been difficult to remain focused.

“It was difficult to stay motivated with the long break since nationals,” Kihira noted. “I tried to watch videos to see where I could improve on my jumps.”

Shcherbakova skated to “O doux printemps d’autrefois” and was smooth from start to finish in a beautiful blue outfit. She opened with a double axel, then landed a triple flip, before hitting a nice triple lutz/triple loop combination.

Shcherbakova, Russia’s reigning national champion, received level four on her spins and level three on step sequence while exuding elegance and earned the top score of 81.00.

“I’m very happy that the world championships were not cancelled and that we are here and can compete,” Shcherbakova commented. “I am sad there are no fans here and I was a bit nervous because of that.”

Elizaveta Tuktamysheva, the 2015 world champion, continued her resurgence and is third on 78.86.

American Karen Chen (74.40) is a surprise in fourth place.

Kaori Sakamoto (70.38) received an edge call on her triple lutz and is in sixth place at 70.38, while American champion Bradie Tennell (69.87) is seventh.

Two-time world junior champion Alexandra Trusova struggled and is 12th with 64.82. She botched her planned triple lutz/triple toe loop combo, landing awkwardly on the front end of it, which made her unable to execute the second half of it.

Satoko Miyahara (59.99) is out of medal contention in 16th place. She fell on her opening jump (a triple lutz) which was supposed to be part of a combination with a triple toe loop.

She tried to add a triple toe loop onto her triple loop later in the program, but was only able to manage a single toe loop.

The pairs event was scheduled to begin later Wednesday with the short program.

The men’s competition will get underway on Thursday morning in Sweden with the short program, where two-time Olympic champion Yuzuru Hanyu will take on two-time world titlist Nathan Chen of the United States. It will mark the first time the pair have met with Hanyu at full health since the Cup of Russia in October 2017.