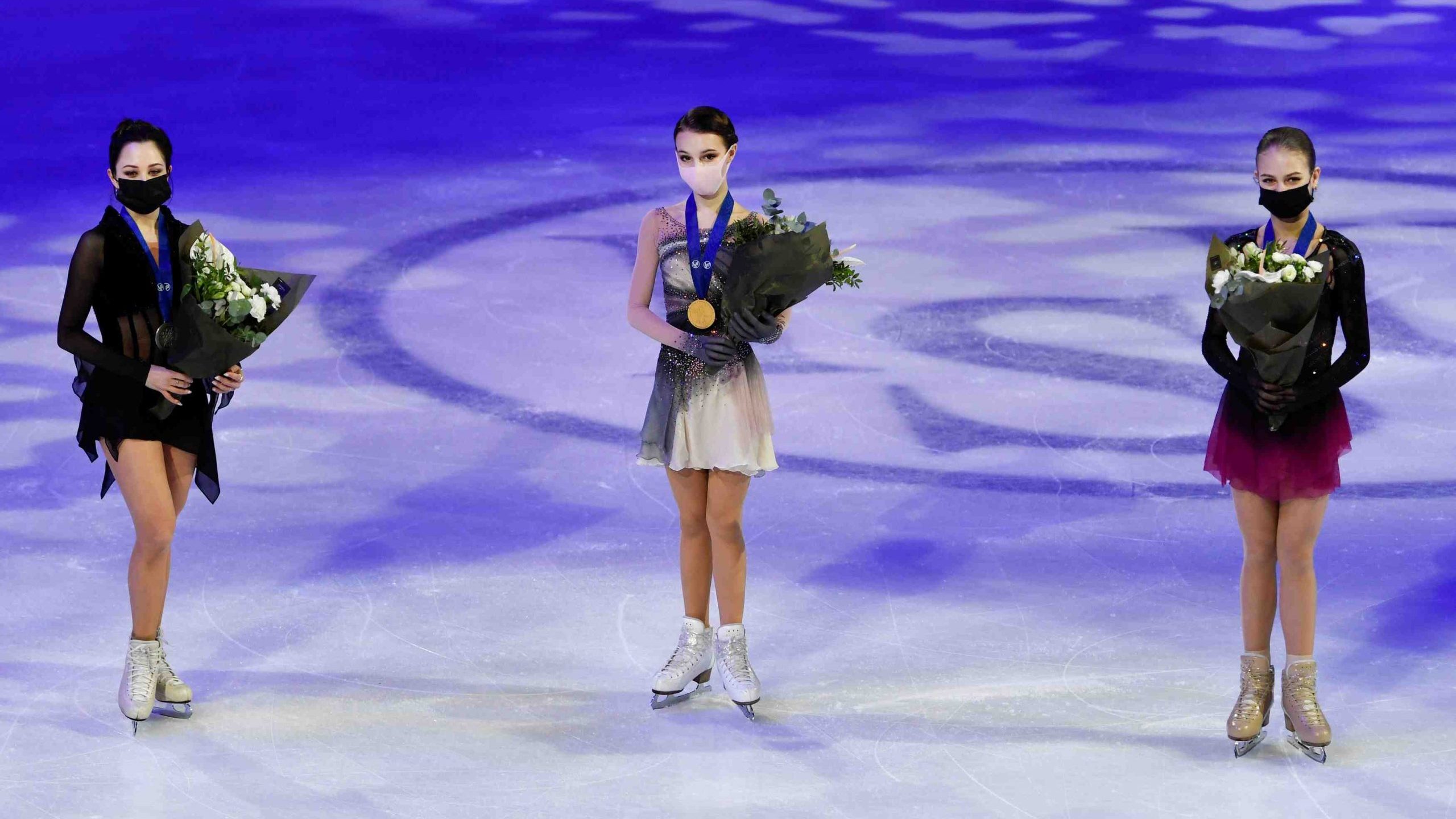 Anna Shcherbakova led a Russian sweep in the women’s singles at the world championships in Stockholm on Friday night. Shcherbakova was joined on the podium by Elizaveta Tuktamysheva and former training partner Alexandra Trusova.

The 16-year-old Shcherbakova captured her first world title with a total score of 233.17 points at Ericsson Globe, with Tuktamysheva taking the silver medal at 220.46, and Trusova the bronze on 217.20.

The good news is that Sakamoto and Kihira’s combined finish of 13th assured Japan’s women of three spots at next year’s Beijing Olympics.

Shcherbakova skated to “The Home of Dark Butterflies” and fell on her opening quadruple flip, but bounced back to land seven triple jumps on the way to victory. It was not a dominating performance for the Moscow native, as she did not land a quad, earned a level two on one of her spins, and a level three on her step sequence. But it was still good enough to take home the crown.

“It is a great honor to have won the world championship,” Shcherbakova stated. “It will give me new energy to work harder for next season. I am not totally happy with my performance today, but I fought until the end.”

Tuktamysheva captured her first world medal since 2015 when she won the gold. The 24-year-old competed to “Chronicles of a Mischievous Bird” and fell on a triple flip, but cleanly landed five triples and received level fours on two of her spins.

“This has not been an easy year for everybody,” Tuktamysheva commented. “The silver medal at the world championships motivates me for next season. I want to qualify for the Olympic Games.”

Tuktamysheva got emotional when she saw her scores posted.

“I was overwhelmed when I saw that I was in first place [at that point],” Tuktamysheva said. “After I fell on the flip I thought it might be over for me.”

Trusova, who was 12th after the short program, won the free skate (152.38) by landing two quads (flip, lutz) and earning level fours on her three spins. The 16-year-old attempted three more quads, but fell on two of them in her skate to “Romeo and Juliet.”

“I’m happy that I was able to move up from 12th place to make the podium,” Trusova said. “I’m just happy the world championships took place this season after being cancelled last season.”

Sakamoto landed six clean triples in her performance to “The Matrix.” Her effort was crucial in the wake of Kihira’s tumble.

“After the first overturned jump [an edge call on her triple lutz], I switched and jumped in my own way,” Sakamoto noted. “I think the score is unavoidable. I was keenly aware of how much the 70 percent reduction would be due to the lutz error, so I have to correct it.”

Kihira competed to “Baby, God Bless You” and fell on a triple axel and did not attempt a quad salchow as she was expected to. She had a triple lutz downgraded and under-rotated a triple salchow. She finished ninth in the free skate.

“I wasn’t nervous at all, I was concentrating, but that was the limit and I couldn’t put my strength into it,” Kihira remarked. “I couldn’t adjust to the time zone and my body was sleeping. My condition was better at the time of the official practice.”

Difficulty with the salchow in practice is why Kihira said she left it out of her free skate.

“I decided not to put the quad salchow in after the practice and decided to go with the two triple axels,” Kihira stated.

Satoko Miyahara, who was fourth at the Pyeongchang Olympics, ended up 19th with 172.30 after falling twice in her free skate.

“I wasn’t injured, but there were a lot of small things, and I wasn’t doing so well,” Miyahara commented. “Maybe I was worried somewhere in my heart. I had pain in my right leg from my boots in Japan, but now it doesn’t hurt so it didn’t matter here.”

Earlier Friday, Russia’s Victoria Sinitsina and Nikita Katsalapov took the lead in the ice dance with a score of 88.15 in the rhythm dance. Madison Hubbell and Zachary Donohue (86.05) of the United States are in second place, with Americans Madison Chock and Evan Bates (85.15) in third.

The free dance is set for Saturday night.

The men’s free skate will be held on Saturday afternoon, with Yuzuru Hanyu holding a six-point lead over compatriot Yuma Kagiyama and an eight-point margin over Nathan Chen after the short program.

Japan’s Riku Miura and Ryuichi Kihara finished 10th with a tally of 184.41.