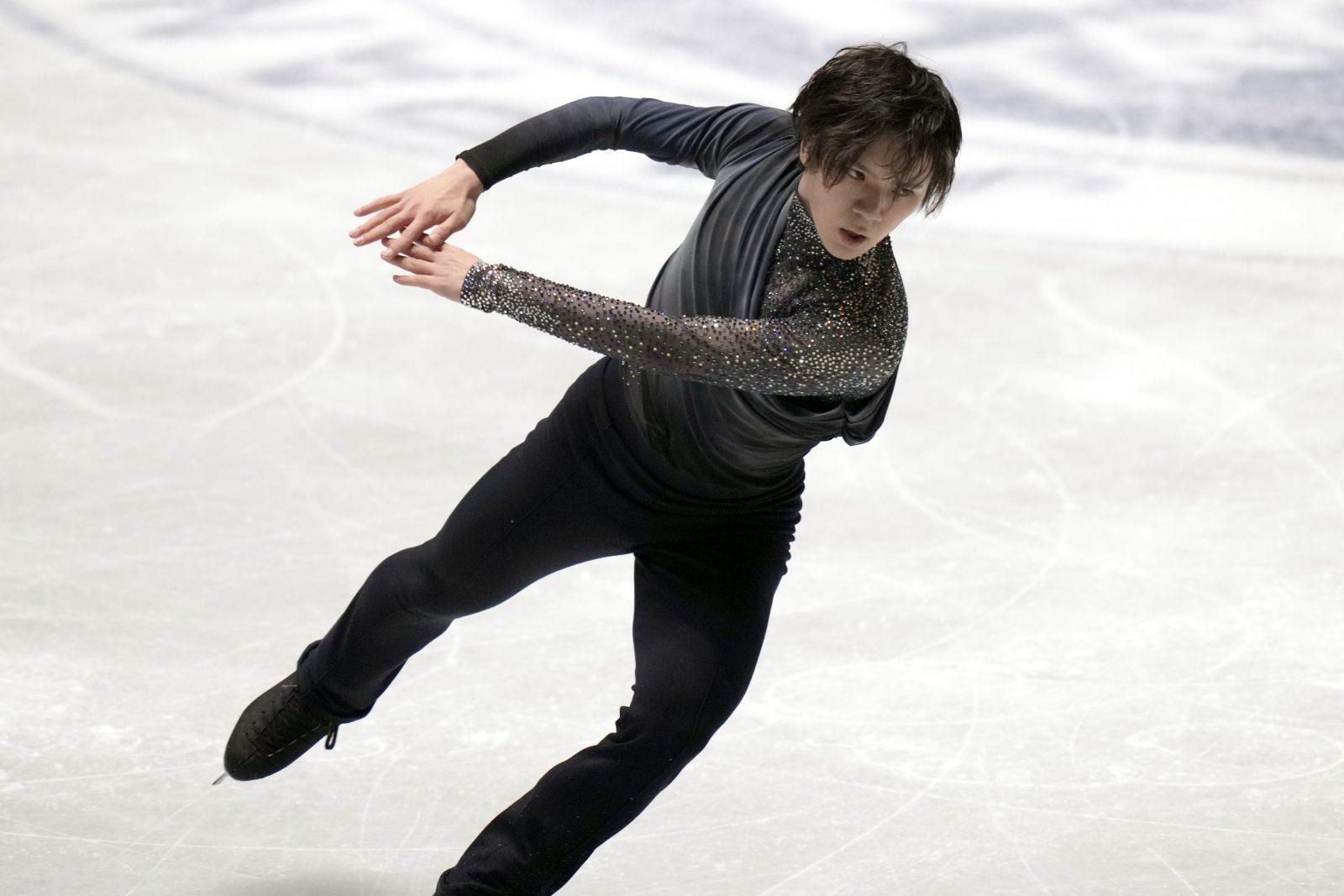 Shoma Uno performs in the men's short program at the NHK Trophy on November 12 at Yoyogi National Gymnasium. (Shuji Kajiyama/AP)

Shoma Uno seized the lead after the short program at the NHK Trophy with a sublime performance on Friday night, November 12 at Yoyogi National Gymnasium. The Pyeongchang Olympic silver medalist was in top form as he looked to clinch a spot in next month’s Grand Prix Final in Osaka.

Uno score of 102.58 points gives him a three-point edge over American Vincent Zhou, who is in second place with 99.51, heading into Saturday’s free skate. South Korea’s Junhwan Cha is in third at 95.92.

Kaori Sakamoto is in first place after the short program with a solid showing. Sakamoto is on top with 76.56, with Mana Kawabe in second at 73.88, and South Korea’s Young You in third on 68.08.

Uno skated to a pair of Oboe Concertos and began with a beautiful quadruple flip, then followed it with a quad flip/double toe loop combination jump. He went on to hit a nice triple axel and received level fours for all of his spins and a level three for his step sequence.

“To be really honest, it’s not really about whether the performance was good or bad, but in my combination the [planned] triple [toe loop] became a double and I am very disappointed, because this season is still long, so now is not the time for me to try to play it safe,” Uno stated.

Zhou skated to “Starry, Starry Night” and looked polished from start to finish. He opened with a quad lutz/triple toe loop combo, followed by a quad salchow and landed a triple axel. Zhou, who was sixth in Pyeongchang, appeared headed for a score of 100 points, but his last two jumps were landed a quarter short.

“Actually, I felt a little bit shaky,” Zhou admitted. “My legs were a little bit nervous, and I think that was reflected in the quality of some of my spins and my triple axel. I definitely understand why I didn’t reach 100 points, but overall I’m pretty happy with my performance. I think it is a good point to move on to tomorrow.”

Sakamoto, who was fourth at Skate America, skated to “Now We Are Free” and opened with a nice double axel, then had an edge call on her triple lutz, but went on to hit a big triple flip/triple toe loop combo. She earned level fours on her spins, but just a level three for her step sequence.

Sakamoto looked poised throughout as the final skater in the women’s field.

“I was able to skate very cleanly and I was actually very calm throughout,” Sakamoto stated. “I was quite nervous and felt like I wasn’t well grounded, but the six-minute [warmup] I was able to get my usual jumps back and I was able to realize that I was back to my normal self.”

Kawabe, the 2019 Japan junior champion, skated first to “A Quoi Ca Sert l’Amour” and began with a nice triple axel, she landed a triple lutz/triple toe combo, and then received an edge call on her triple flip. Kawabe was the only woman to land a triple axel on this night.

“My goal was to get 70 points, and I was expecting a score in the low 60s,” Kawabe noted. “I was happy and surprised that my score came out better than I expected. I was able to do a good one (triple axel) in the six-minute warmup, so I was confident. I was very relieved after I landed it.”

Matsuike, a contender for Japan’s Olympic team, had a disappointing outing. She under-rotated the front end of her opening triple lutz/triple toe combo, received a level three for one of her spins, and only a level one for her step sequence.

“I was more nervous than usual when I wasn’t satisfied with my practice,” Matsuike remarked. “I was overwhelmed by anxiety. I slipped.”

You fell on her opening triple axel to “Whirling Winds,” as did Liu to “Gypsy Dance.”

Russia’s Daria Usacheva, who was second behind compatriot Alexandra Trusova at Skate America, took a tumble during the six-minute warmup and withdrew injured. She was crying as she was carried to the locker room by one of her coaches.

Mishina, Galliamov In First in Pairs

Anastasia Mishina and Alexsandr Galliamov lead the pairs with 78.40 after the short program, ahead of fellow Russian’s Evgenia Tarasova and Vladimir Morozov (75.78). Riku Miura and Ryuichi Kihara (73.98) are in third.

Russia’s Victoria Sinitsina and Nikita Katsalapov (86.33) are in front in ice dance after the short dance. Madison Chock and Evan Bates (86.02) of the U.S. stand in second.

Kana Muramoto and Daisuke Takahashi (70.74) are sixth, while Misato Komatsubara and Tim Koleto (68.13) are seventh.

The NHK Trophy continues on Saturday, November 13 with the pairs free skate, the rhythm dance, and women’s and men’s free skates.