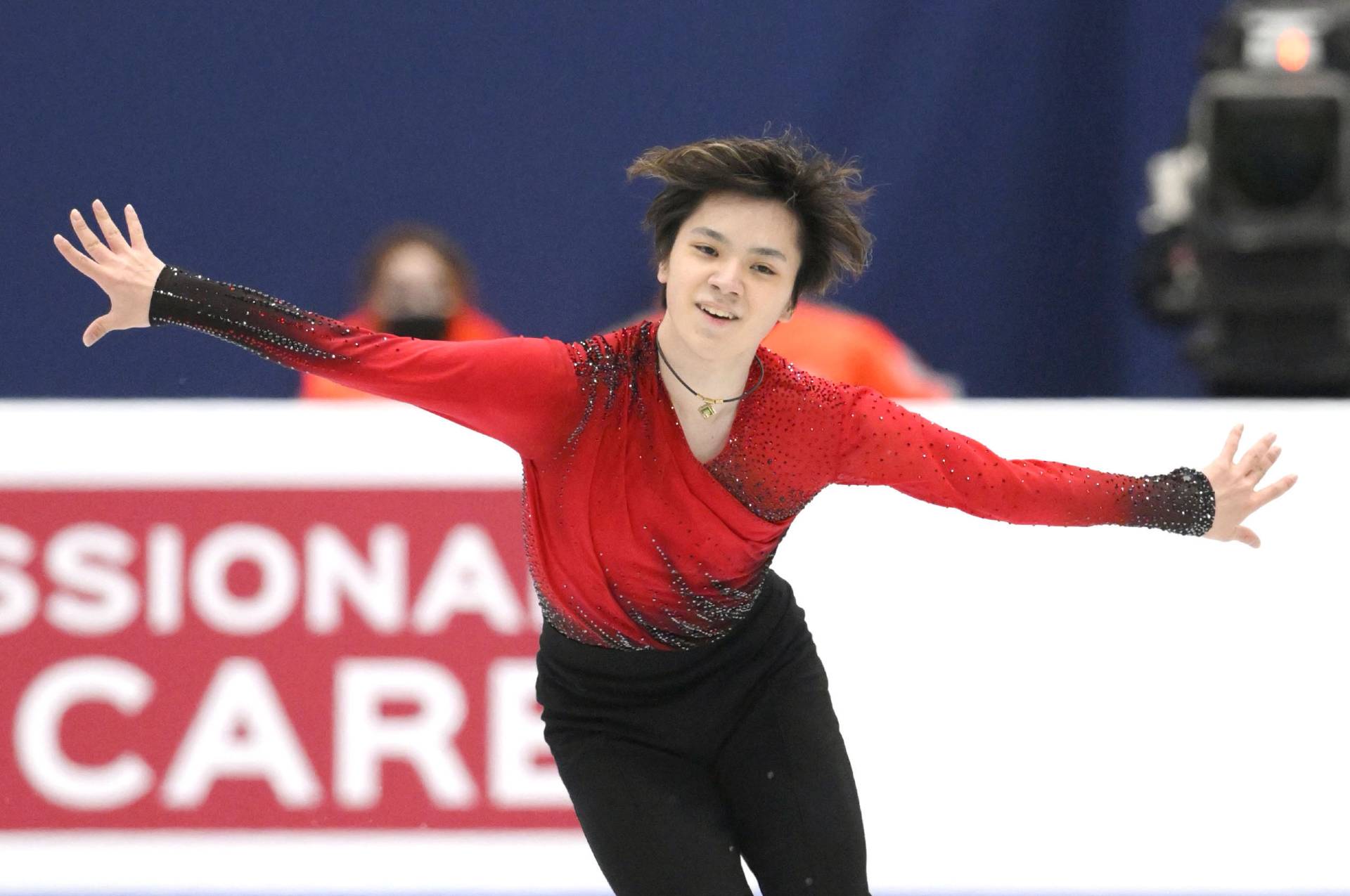 Shoma Uno performs to “Oboe Concerto” in the men's short program at the World Figure Skating Championships on March 24 in Montpellier, France.

The power of Japanese skating was on full display Thursday, March 24 at the world championships, as Beijing Olympic bronze medalist Shoma Uno led a 1-2-3 finish with teammates Yuma Kagiyama and Kazuki Tomono in Montpellier, France.

Uno rang up a personal-best score of 109.63 to move out to a nearly four-point lead over Kagiyama (105.69) heading into Saturday’s free skate. Tomono, Japan’s second alternate for the event, tallied 101.12.

Ilia Malinin of the United States is in fourth place with 100.16, while Italy’s Daniel Grassl is in fifth on 97.62.

Uno skated beautifully to “Oboe Concerto” and surpassed his previous high short program mark of 105.90 in Beijing. He started with a quadruple flip, then uncorked a sublime quad toe loop/triple toe loop combination jump, before going on to hit a triple axel.

The 24-year-old Uno earned level fours for his spins and step sequence.

“It was exactly as I always do in practice, which is really a difficult thing to do in competition, so I am glad,” Uno stated. “The free skate is full of difficult elements, but it was choreographed by [coach] Stephane [Lambiel], so I really want to make the best of it.”

Uno talked about his evolution as a skater over the past few years.

“In the past three years, I have changed so much,” Uno noted. “Three years ago, I was skating toward the end of my career, but now I am skating for the future. I am amid the journey of my growth, so I want to show that.”

Kagiyama skated to “When You’re Smiling” and put on another strong showing. He opened with a quadruple salchow, then landed a huge quadruple toe loop/triple toe loop combo. His one mistake came on his final jump, when he had to do a three-turn coming out of his triple axel.

The 18-year-old notched level fours on his spins and step sequence.

“I think I was being over prudent on the triple axel and couldn’t perform as practiced, but the two quads were like the best ever, so I am happy,” Kagiyama commented. “For the free skate it’s the same layout, I haven’t really improved the loop, so I will try to put it all together.”

Kagiyama admitted that fatigue is setting in as the season nears its end.

“I am tired from the Olympic Games, but this is the last opportunity for performing this season, so I want to show my best,” Kagiyama remarked.

Tomono competed to “Cinema Paradiso” and began with a big quad toe loop/triple toe loop combo. Then he landed a quad salchow, and went on to hit a triple axel. The 23-year-old posted level fours on his spins and a level three on his step sequence.

Added Tomono, “I hope that in the free [skate] I will be able to carry out the performance of Kazuki Tomono with all his heart.”

Alexa Knierim and Brandon Frazier of the United States lead the pairs with 76.88 after the short program on Wednesday night, while their teammates Ashley Cain-Gribble and Timothy Leduc are in second at 75.85.

Riku Miura and Ryuichi Kihara are in third place on 71.58. After finishing seventh in Beijing, Miura and Kihara are hoping to land Japan’s first ever pairs medal at the worlds in the absence of the Russian and Chinese teams.

The pairs free skate was set for later Thursday.