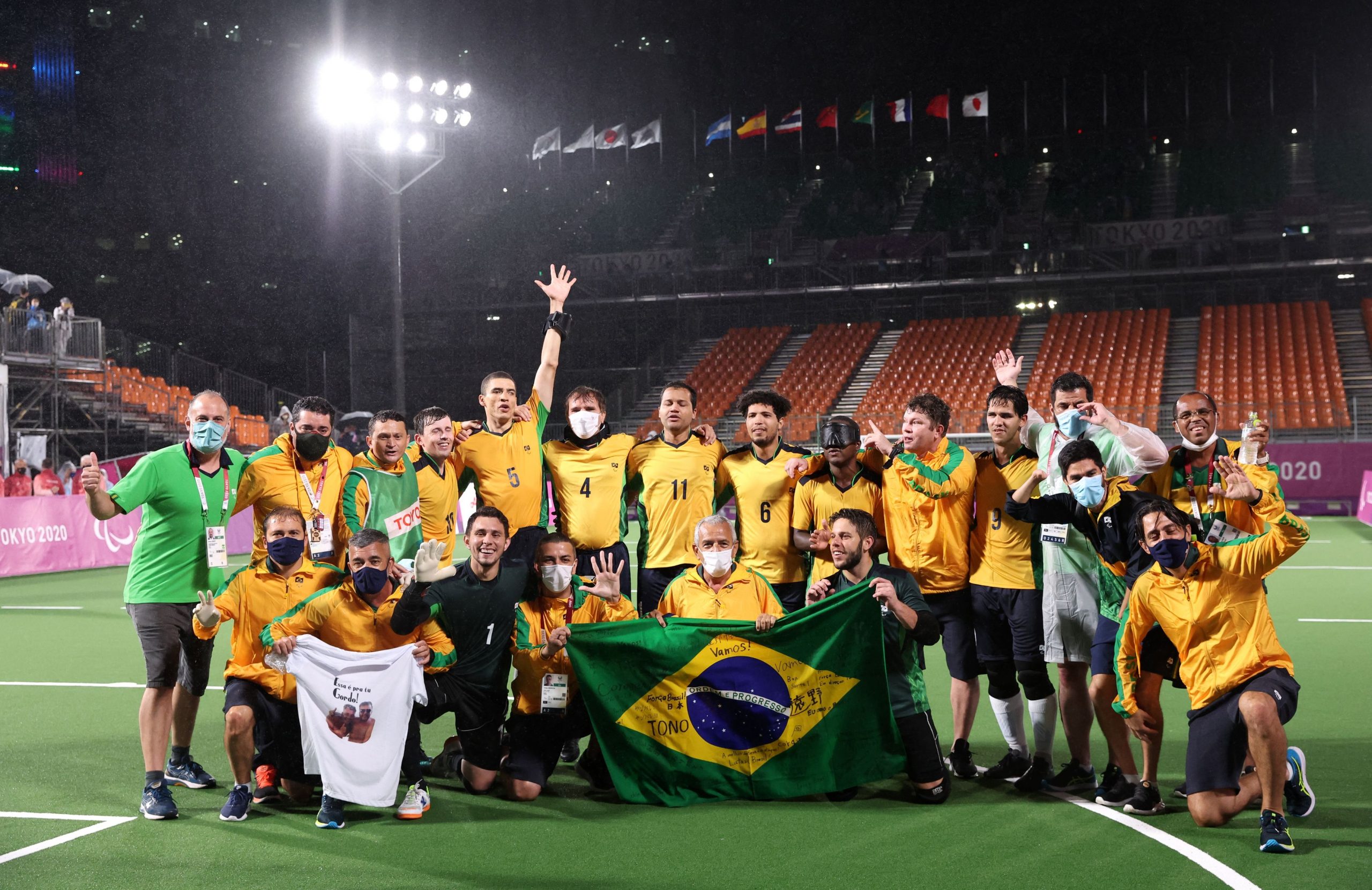 Gledson Da Paixao Barros of Brazil and teammates pose for a photo after winning their match. (REUTERS/Bernadett Szabo)

In a hard-fought match to the last kick and roll, Brazil once more confirmed it is the uncontested king of 5-a-side football in the Paralympics by winning 1-0 against Argentina on September 4.

Brazil has won every single gold medal in the sport since it was introduced into the Paralympics in Athens in 2004.

And to celebrate the outstanding achievement, the Brazilian team erupted in unbridled shouting, singing and hugging upon the conclusion of the match, warming the hearts of onlookers.

The match at Aomi Urban Sports Park was a close one, with many attempted attacks and successful defensive moves on both sides, leaving little room for maneuver.

A highlight of the match was undoubtedly the excellent play by Jeferson Goncalves, who is reputed to be one of the top strikers in the sport. Nicknamed “Jefinho,” he is more widely known as “Paralympic Pele,” at the forefront of the Brazilian attack.

For its part, Argentina tried to keep the pressure up, especially with defense, and the first half finished 0-0.

In the second half, Argentina stepped on the accelerator and attempted to score on a Nahuel Heredia corner kick, but it was also blocked by Brazilian goalkeeper Luan Goncalves.

Ultimately, however, the decisive strike came from Raimundo Mendes. The veteran player, who has been with the team for two Paralympics ー since London in 2012 — was looking for his third gold medal.

The 34-year-old entered the game as a substitute halfway through the second half, and shortly afterward attempted to score in the 31st minute.

With just eight minutes to go, he broke through the Argentine defense, and the left-footed player scored the lone goal of the match.

The Argentines, visibly shaken by this change in pace, attempted to equalize with a couple of attempts by ace Maximiliano Espinillo in the 36th minute, but neither one scored, and even the final desperate attempted corner kick by Froilan Padilla was drowned by the whistle announcing the end of the match.

It was an especially disappointing result for Argentina, which had won its  third consecutive IBSA Blind Football World Grand Prix this June in Japan. The final was in some ways a rematch of the final gold medal match seventeen years earlier, in Athens in 2004.

The Argentine midfielder Angel Deldo Garcia commented on the match: “We won bronze in Rio and now silver, so [in 2024] it is our turn. We are going to fight hard to finish at the top of the podium in Paris [for the 2024 Games].”

“We are ready to match Brazil there. They are a good team, but losing this match is going to make us work together even harder,” said Deldo Garcia.

The Brazilians had an unblemished record of straight wins going into the final, having beaten China 3-0, Japan 4-0, France 4-0 and Morocco 1-0. Over five matches, Brazil didn’t concede a single goal.

“We fought very hard, we dedicated a lot to preparing for this tournament, and we have a very strong team,” he said after the match. “Today we believed right until the end and we didn’t give up, which is why we won this gold medal.”

Commenting on winning the medal during a pandemic, Mendes said: “This one feels different because of the circumstances we are in. This pandemic affected our training.”

Following the first win against China, captain Ricardinho told Agence France-Presse that the stellar track record of the team also put a lot of pressure on Brazil: “Football is in the blood of Brazilians ー this is a big pressure, because the Brazilian people always expect to win.”

“The Brazilian people expect results because we have the potential to be champions,” he emphasized. And it appears that their hopes were answered.

Meanwhile, in the bronze-medal match, Morocco defeated China 4-0, securing its first-ever Paralympic medal in the sport, and Morocco’s first medal outside of athletics in these Games.

Football 5-a-side in the Paralympics, sometimes known as blind football, is a slightly adjusted form of the sport to accommodate the play of four visually impaired athletes and an able-bodied goalkeeper.

Taking place on a smaller court, with cushioned barriers on the side to guide players at the edge of the court, the game is characterized by quick flips, kicks and fearless play on offense and defense.

The ball makes a sound when it rolls, and to keep the play fair, all athletes except the goalkeepers wear blackout eye masks. The match is divided into two halves of 20 minutes each, but unlike mainstream football, the clock is stopped every time there is an interruption in the game.