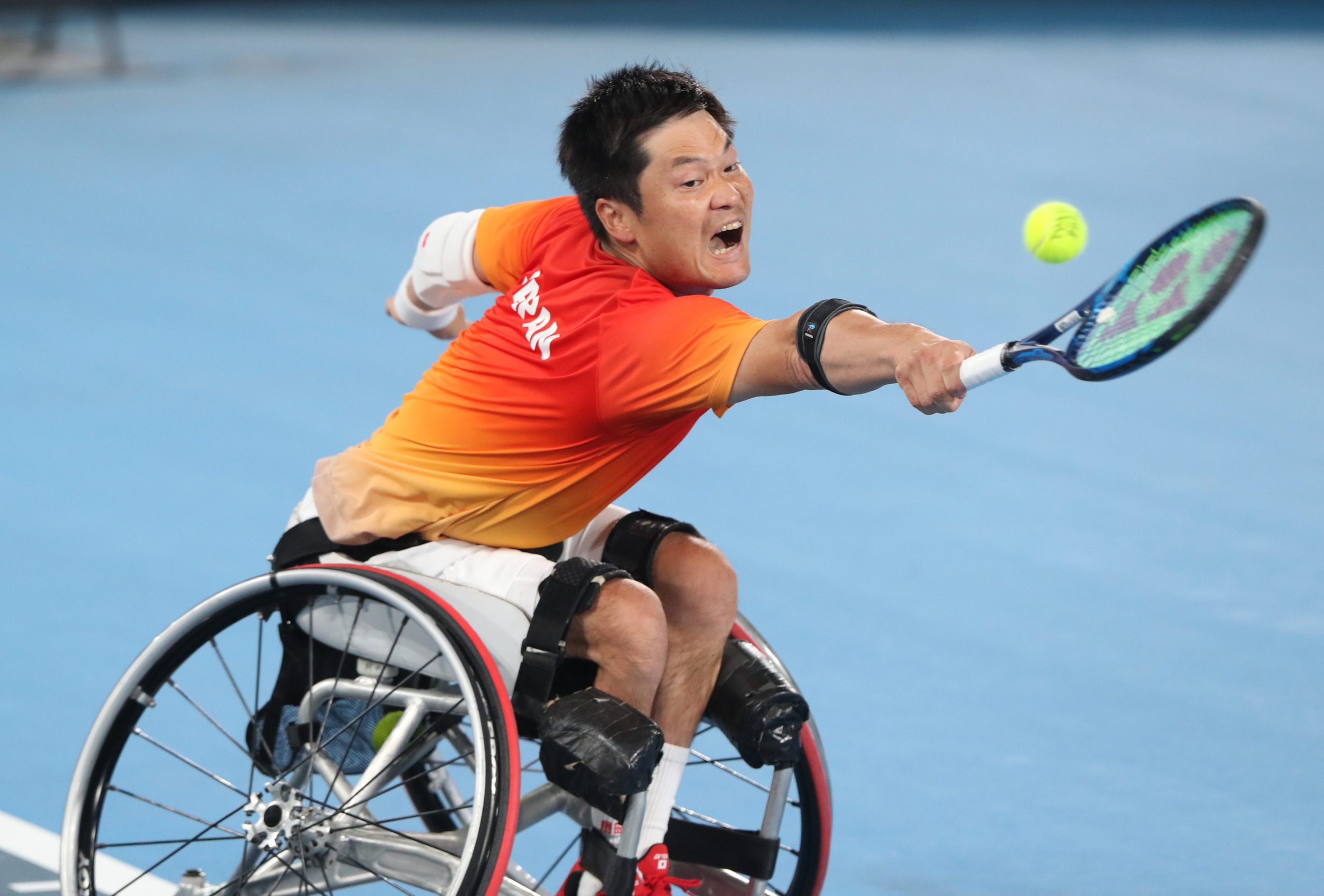 Shingo Kunieda solidified his place as one of Japan’s greatest Paralympic athletes on Saturday, September 4, by winning his third gold medal in wheelchair tennis.

Top-seeded Kunieda overpowered eighth-seeded Tom Egberink of the Netherlands 6-1, 6-2 in a match that lasted 1 hour, 18 minutes on Center Court at Ariake Tennis Park.

Egberink broke Kunieda in the first game of the first set, but Kunieda broke back in the second game and was firmly in control the rest of the way.

After winning the gold medal in Beijing in 2008 and in London four years later, Kunieda missed out in Rio de Janeiro in 2016 and was determined to avenge that loss in his hometown.

“I put all my effort into this day and am so glad it paid off,” Kunieda said in a courtside interview after the match. “I did think of retiring after Rio so it’s unbelievable to get back to being at the top in Tokyo.”

Kunieda won the final game of the first set with a well-placed backhand volley.

“I was a bit tense at first but I was really able to use my backhand effectively and that was a big factor in helping me find my rhythm,” Kunieda said.

The 37-year-old Kunieda was just as dominant in the second set as he was in the first.

He broke Egberink in the first game of the second set with a superb backhand volley at the net. Kunieda then broke Egberink a second time with another perfectly-placed backhand slice to go up 4-1 and put the result beyond reach.

He secured the win, and the gold medal, on his fifth match point when Egberink’s forehand went into the net.

“I didn’t think about winning or losing,” Kunieda said. “I just tried to focus on what I needed to do on the court. It’s an unbelievable feeling. I want to continue playing wheelchair tennis to generate greater interest in the sport.”

Kunieda became the first player to successfully defend his Paralympic men’s singles title at the 2012 London Games. But a sore right elbow led to a quarterfinal exit at the Rio Games.

But after falling short of his goal in Rio, Kunieda decided to press on.

He returned to the tour in 2017 with a new coach and looking to improve his backhand techniques. His efforts paid off with two Grand Slam titles in 2018.

Kunieda was the captain of Japan’s Paralympic delegation.

Due to a tumor in his spinal cord found when he was 9, Kunieda is paralyzed in the lower half of his body.

With 101 career titles over singles and doubles combined, including 45 Grand Slam titles, Kunieda is considered by many to be the greatest male wheelchair tennis player of all time. He is a 10-time winner of the Australian Open, a seven-time winner of the French Open and has won the U.S. Open seven times.

It was the second straight day that Kunieda faced Egberink. On Friday, September 3, Egberink and partner Maikel Scheffers defeated Kunieda and Takashi Sanada 6-3, 6-2 in the doubles third-place match.

On Thursday, September 2, Kunieda defeated Britain’s fifth-seeded Gordon Reid 6-3, 6-2 to book a spot in the final.

Reid won the bronze medal with a 6-4, 3-6, 7-5 win over compatriot Alfie Hewitt in the match before the final.

Kamiji is a thre-time Paralympian.

Ohtani made her Paralympic debut in Tokyo.

Sarina Satomi overcame a rough start in the women’s WH1 badminton singles final at Yoyogi National Stadium. The second-seeded player recorded a 14-21, 21-19, 21-14 victory over No. 1 seed Sujirat Pookkham of Thailand.

In the second game, Satomi found her rhythm and played at a more consistent level against her 35-year-old Thai opponent.

In the biggest stretch of the match, Satomi was game for the challenge. She exchanged shot after shot with Pookkham during a riveting 38-stroke duel that took 46 seconds. The sequence produced the longest rally of the match.

Clearly, that stretch empowered the Chiba Prefecture native and boosted her confidence.

Satomi’s fired-up demeanor energized her as she evened things up with the game 2 win. From there, she used that momentum as a springboard to success in the deciding game.

“I am incredibly happy, it is like a dream,” Satomi was quoted as saying by Kyodo News after the match. “I have worked hard for this moment and for this day so I am very happy to win the gold I have been aiming for.”

After sustaining leg and spinal cord injuries as a third-year high-school student in May 2016, Satomi spent nine months in the hospital and began using a wheelchair.

A badminton player before the traffic accident, Satomi joined a local wheelchair badminton club after her father made the suggestion.

Satomi developed a fondness for wheelchair badminton and enjoyed success in the sport early on. She was the women’s singles champ in WH1 (a classification for severe impairment) and a doubles champ at the 2019 Badminton World Federation Para-Badminton World Championships in Basel, Switzerland.

The variety of shots and in-game decisions are appealing to her, too.

“Sometimes I predetermine what tactics to adopt beforehand, and at other times, I just play instinctively,” she told Paralympic.org. “During long rallies, there are moments when I realize that I’m playing tactics with the opponent, which makes me truly immerse myself in the joy of playing badminton.

“Of course, I feel happy when I score a point, but I also feel admiration and can’t help smiling when my opponent gains a point with an attacking move I’ve never encountered before. It’s these moments that I love about badminton.”

By winning the gold medal, Satomi fulfilled her goal of being a champion in the inaugural badminton tournament at the Paralympics.

Satomi spoke about this goal in an interview with Paralympic.org in October 2020.

“I definitely would like to become the ‘first queen.’ I’m exhilarated about the Games being hosted in Japan because it will help promote the sport to a wider audience,” she commented. “I also want to see people close to me get excited to see me play and win, so I will do my best.”

Another opportunity lies ahead for her to do just that: Satomi and doubles partner Yuma Yamazaki, the No. 1-seeded tandem, face China’s Yutong Liu and Menglu Yin, the No. 2 pair, in the women’s doubles final on Sunday, September 5.

Japan faced a 4-1 deficit entering the final end of its BC3 gold-medal match against South Korea at Ariake Gymnastics Centre.

The team of Keisuke Kawamoto, Kazuki Takahashi and Keiko Tanaka  made a spirited comeback and tied it at 4-4 before the fourth end concluded. South Korea won the tiebreaker based on the best shots and took home the title.

In the BC3 class, players have severely limited use of their arms and legs. As detailed on Paralympic.org, “They are unable to consistently grasp or release the ball and are unable to propel the ball consistently into the field of play and allowed to use a ramp with the help of a Sport Assistant.”