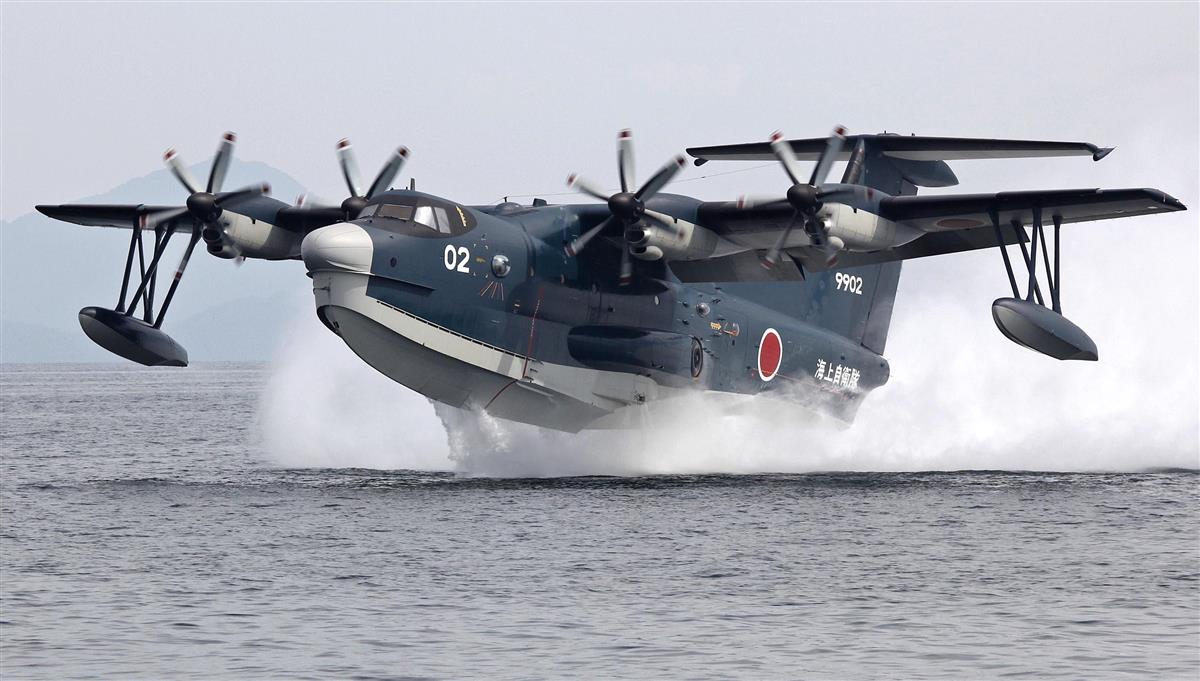 The ShinMaywa US-2 seaplane / search and rescue plane.

A quarter century ago this month in October 1996, ShinMaywa Industries, a Hyogo Prefecture-based aircraft maker, was named the prime contractor to develop the US-1A Kai, later renamed the US-2 amphibian aircraft.

On the 25th anniversary of the start of its development, with unmatched capabilities and Japan’s unique technology, the US-2 offers strength and agility not only to Japan and its Self-Defense forces, but well beyond the region.

It may not be a fighter jet with top speeds and fancy maneuvers, but this life-saving workhorse deserves a special note of thanks on its anniversary.

The US-1A Kai (with Kai meaning “improved”) was intended to be a greatly modified version of the US-1A seaplane, built by the same company and introduced in the early 1970s as an aircraft capable of both anti-submarine warfare (ASW) and search and rescue (SAR).

By the early 1990s, the US-1A fleet was showing its age and the Japan Maritime Self-Defense Forces (MSDF) sought funding for a replacement. There was not enough money to design and make an entirely new aircraft, however, so ShinMaywa agreed to try an upgraded and modernized version of its amphibian plane.

Most readers have seen a picture of a seaplane, and very likely a picture of the earlier US-1A or current US-2.

Early seaplanes and floatplanes, such as those used before and during World War II, were made by ShinMaywa’s early predecessor, Kawanishi Aircraft Company. There were dozens of models and many built, including the Kawanishi H8K “flying boat,” which the Allies named “Emily.”

These aircraft were ingeniously used during the war. In fact, Japanese forces were so good at using them and the technicians so good with designing them that the Allies banned Japan from building aircraft after the war.

With the end of the occupation, in 1952, the ban was lifted and Kawanishi’s successor, ShinMeiwa (established in 1949 and renamed ShinMaywa in 1992), resumed its aircraft business the following year.

Although there were other amphibian aircraft companies around the world, ShinMaywa once again became the world’s best, due to its singular focus on resolving the problems that plagued seaplanes of all companies.

Namely, the plane had to have good seaworthiness and be able to take off and land in rough seas. It also needed a high-lift device, enabling short takeoff and landing (STOL). Powerful engines were required for the latter, and a “spray suppressor” was invented for dealing with the rough seas.

ShinMaywa’s US-2, like its predecessor US-1A, is able to land in water with a wave height of 3 meters, the only one in the world to be able to do so.

Its four Rolls-Royce AE 2100J turboprop engines allow it not only to have a maximum take-off weight many tons more than its closest competitor, but also to fly double the distance of its other competitors, and at higher altitudes. Further, it requires only a fraction of the distance necessary to take off compared to other aircraft.

It is, simply put, fast, strong, and agile.


Getting to Today’s US-2

The US-2 had to include certain modifications, according to the contract: a pressurized hull, better on-board patient transfer facilities, improved search and rescue capabilities at sea, to name just a few.

After several years, a rollout ceremony for Prototype No. 1 was held in April 2003 at ShinMaywa’s Konan production factory in Kobe (which miraculously survived the bombing during World War II), and the first test flight was conducted in December that year. Prototypes 1 and 2 were delivered to the then-Japan Defense Agency (since 2007, the Ministry of Defense) in March and December 2004 respectively.

After the JDA, along with the Maritime Self-Defense Force (MSDF), conducted their own engineering and service tests, the US-1A Kai was officially renamed the US-2 STOL Search and Rescue Amphibian, and in March 2007, the first of an expected fourteen in total aircraft were delivered.

Currently, there are seven in use by the MSDF to meet a variety of requirements. They are operated by the 31st Fleet Air Wing at Iwakuni Air Station in Yamaguchi Prefecture and Atsugi Air Station in Kanagawa Prefecture. The last US-1A was withdrawn after performing its final flight in December 2017 following the introduction of the US-2.


Search and Rescue, Fire-fighting, and More

The primary mission of the US-2 is search and rescue, such as finding and bringing home downed military and civilian aircraft and their crews, but it has many other capabilities, too.

First, the seaplanes are sent out to find passengers, ships and boats in distress, people adrift at sea (such as shipwrecks, stranded swimmers, surfers, boaters, tsunami victims, etc.).

At the same time, they carry out reconnaissance on unidentified or potentially hostile ships and anti-submarine warfare.

It is the plane’s versatility, and the fact it can also land on runways as well as on water, that allows it to perform missions such as the transportation of people and supplies. Indeed, its missions will likely grow to include non-combatant evacuations (NEOs), conducting mid-air refueling operations, and serving as a flying command post providing communication or data links.

ShinMaywa, whose name you see on special purpose trucks and passenger boarding bridges at airports as you board your plane, also produces a civilian fire-fighting version of the aircraft. This model, which has attracted attention around the world from potential buyers, replaces one of the fuel tanks with a 15-ton water tank.

As the plane skims the water (an ocean, lake, dam, or reservoir), in a matter of seconds the water tank is filled. It’s durable enough for salt water, foam, and fire retardant, not to mention fresh water. The volume is approximately twice that of the maximum volume scooped up in the buckets flown by the Ground Self-Defense Force’s CH-47 heavy lift helicopter, which was employed at Fukushima in March 2011. It is also about twenty-five times that of the buckets used by smaller fire department helicopters.

Having the water tank installed in place of a fuel tank necessarily reduces the maximum range of the aircraft by half, or 2,300 km. But in most cases such long-distance firefighting would not be necessary once on the scene.

Importantly, it's already long range allows Japan to dispatch the aircraft to countries in need fighting forest fires or other disasters. Had a request been made, it likely would have helped in the Australian wildfires of 2020, not only demonstrating its reach and capabilities but also making an important international contribution.

In addition to the civilian firefighting version, the earlier version Prototypes 1 and 2 can be refitted to conduct firefighting as well.

Saving Lives, at Home and Abroad

Its main mission, however, has been search and rescue. The US-2, along with its predecessor, has conducted thousands of at-sea rescues, with thousands of people saved. Many of those include foreigners, including U.S. military personnel in Japan whose aircraft went down while training or on other missions.

One such person was a U.S. Air Force captain whose F-16 went down 700 miles off the Japanese coast in cold January weather. The waves were 3 meters high and the pilot’s life raft was swamped by the water. Four hours later, as he lay barely conscious with hypothermia, the downed pilot saw the MSDF’s plane circling his doomed raft. He knew then he was saved. Two swimmers from the then-twelve-person crew got to him in time and pulled him to safety onboard. A few hours after his rescue, he was in a warm hospital bed at Yokota Air Base.

The US-2, which seats 20 passengers, not including crew, or 12 stretchers, greatly extended the range of operations from 1,500 (of the US-1A) to 1,900 km, allowing for life-saving searches to be done over a wider area for a longer time.

The US-2 can also help in other areas as well.

The Indo-Pacific region is vast, with wide distances between land. It also has many islands. The US-2 is ideal for servicing these islands and coastal areas in a commercial or contractual way.

U.S. military distributed operations and regional training among the Quad countries and others would greatly benefit by employing the US-2, particularly where no airports exist.

Planners at Camp Schwab, the otherwise poorly thought-out site of the relocation of some of Marine Corps Air Station Futenma’s functions, should revise their plans to be able to handle the aircraft there with a seaplane ramp and hangar(s).

The advantages of integrating the ShinMaywa seaplane US-2 into exercises and operational war plans are clear. At the same time, the life-saving benefits it would bring to island states beyond Japan’s shores also beg for action, and any intra-Japanese government bureaucratic resistance to selling or using it abroad should be overcome immediately.

Eldridge is an author and the former political advisor to the U.S. Marine Corps in Japan.