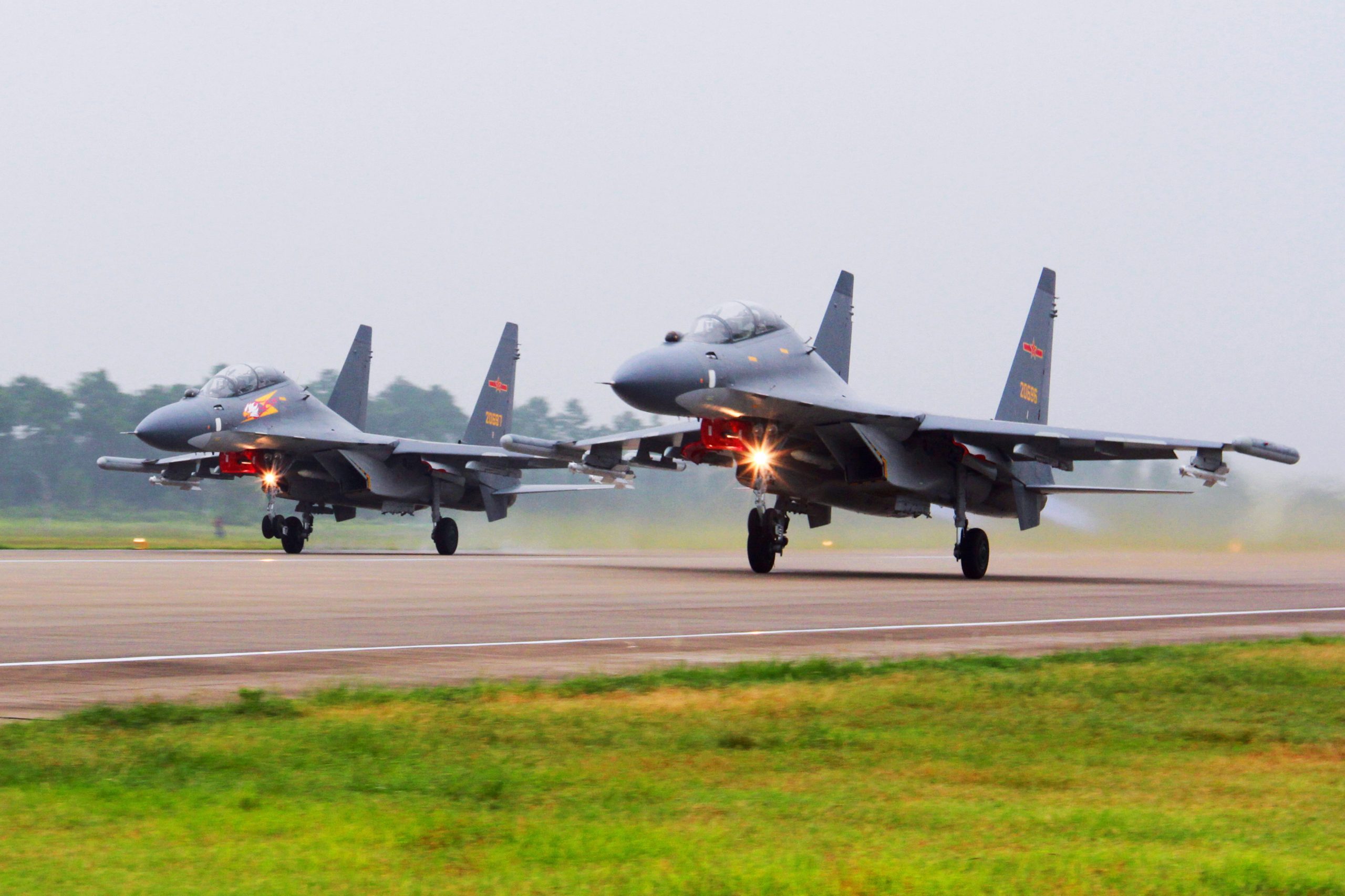 In this undated file photo released by China's Xinhua News Agency, two Chinese SU-30 fighter jets take off from an unspecified location to fly a patrol over the South China Sea. China flew more than 30 military planes, including SU-30 fighter jets, toward Taiwan on Saturday, Oct. 3, 2021, the second large display of force in as many days.(Jin Danhua/Xinhua via AP, File)

China is intensifying its military threats to Taiwan. In the first seven days of October, a total of around 150 fighter jets, bombers, airborne early warning and control planes, and other Chinese military aircraft intruded into Taiwan’s air defense identification zone (ADIZ).

China’s attempt to intimidate and provoke Taiwan with so many military aircraft is decidedly abnormal. Fighter jets belonging to the Taiwan Air Force are being forced to scramble repeatedly in response.

The wave of intrusions began on October 1, China’s National Day. The Global Times, an online tabloid under the control of The People’s Daily, the official organ of the Chinese Communist Party (CCP), said “the PLA had done an excellent job.”

It added, “This can be seen as a form of the National Day military parade in the Taiwan Straits.”

Such juvenile behavior is exasperating to say the least.

The risk of unintentional confrontation is on the rise. The Xi Jinping regime must stop engaging in such attempts at military intimidation and refrain from any conduct that disturbs peace and stability in the region.

One view is that the series of Chinese incursions was a response to counter the recent joint exercise in the vicinity of Okinawa and the Nansei Islands, involving air and naval forces from the United States, Japan, the United Kingdom, Australia, and other nations. But using that as a pretext to intimidate Taiwan is unforgivable.

Taiwan Defense Minister Chiu Kuo-cheng has expressed alarm that military tension between China and Taiwan has reached the most severe level in over 40 years. According to his analysis, China could be capable of mounting a “full-scale invasion of Taiwan by 2025.”

The intruding Chinese military aircraft were flaunting the PRC’s ability to organize formations of fighters, bombers, and other aircraft, and launch attacks on Taiwan, the Taiwan-controlled Pratas Island (Tungsha Tao), as well as warships belonging to the U.S. Navy and other countries. In addition to day flights, there were also night flights.

These persistent flights are probably intended to bring the people of Taiwan to their knees through military intimidation so that the mainland can annex the island.

However, Taiwan is vigorously pushing back by enhancing its deterrent capability. Taiwan’s premier Su Tseng-chang has declared that only by coming together and building up their defense capability can the Taiwanese people deter China from resorting to military force to achieve its aims.

Taipei clearly is set on a course of cooperation with the United States.

Washington is in turn supporting Taiwan. U.S. Secretary of State Anthony Blinken has said, “Actions we’ve seen by China are provocative and potentially destabilizing [to the region].”

On the one hand, it was appropriate that Blinken should clearly call on Beijing to stop its intimidation.

On the other hand, statements made by Chief Cabinet Secretary Hirokazu Matsuno are clearly inadequate. He has only said that he would not comment on every single development or, “Since peace and stability in the Taiwan Strait are critical, Japan is carefully monitoring the situation.”

Prime Minister Fumio Kishida himself must clearly warn China that its intimidating behavior will not be tolerated.