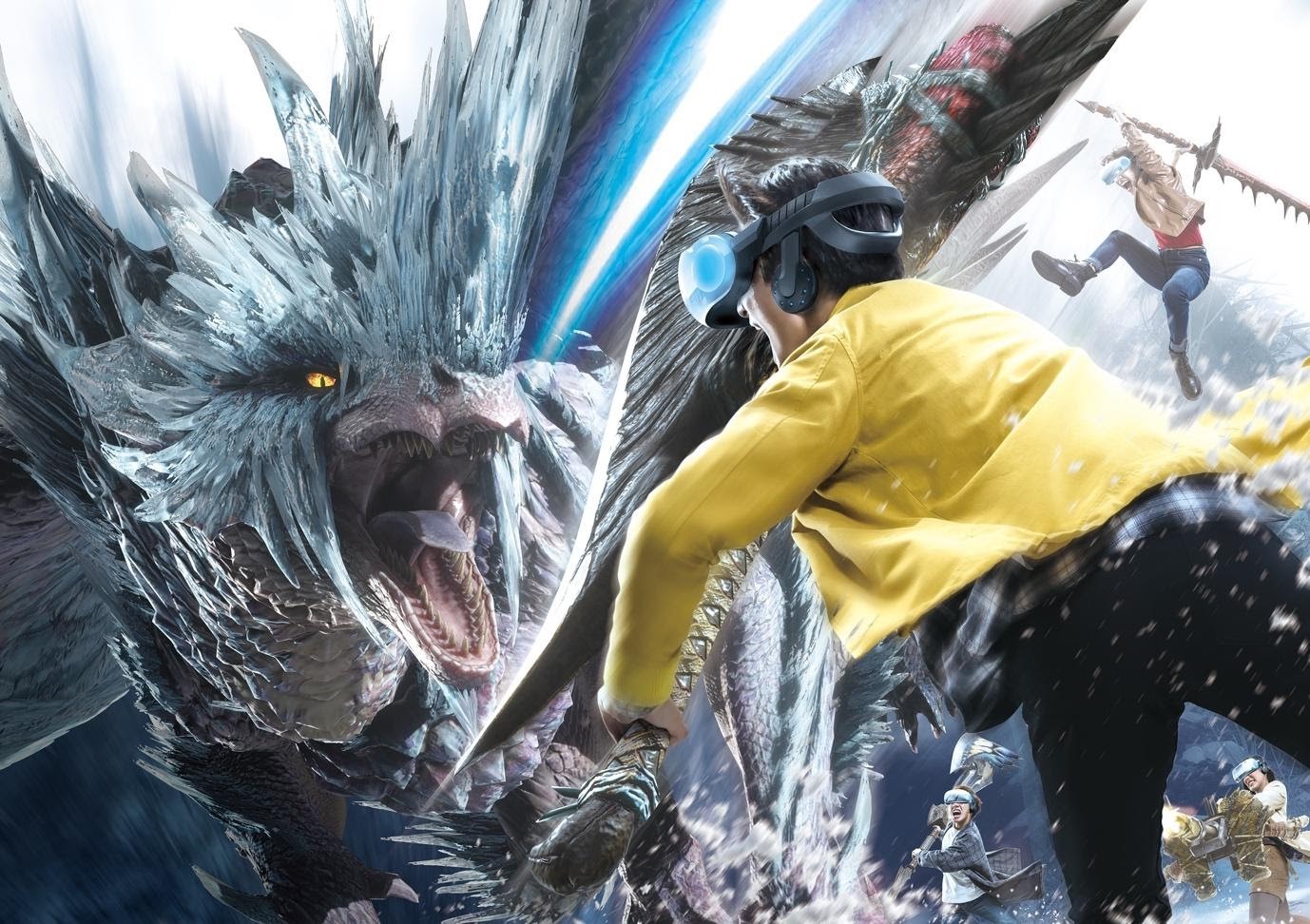 January used to be a month where absolutely nothing happened in the games industry and the movie world. The biggest releases used to come at the holidays or in summer, and in January, a games and movies news site like us at IGN Japan could just put our feet up and plan for the year ahead.

But not anymore. In videogames, the slide came gradually over a few years, as publishers started to realize that the New Year was a wide-open goal.

For example, Capcom found so much success releasing Resident Evil 7: Biohazard in January 2017 and Monster Hunter: World in January 2018 – the latter selling 6 million copies in just two weeks – that it has prioritized late winter and early spring releases for these series pretty much every year since.

Then along came the pandemic, and all the games and movies that missed their holiday release dates due to production delays shifted to the New Year. In 2022, that has meant a torrent of huge January and February releases, from Pokémon Legends: Arceus, Horizon: Forbidden West and Elden Ring on the gaming front, to Spider-Man: No Way Home in movies.

Needless to say, this means January 2022 has flown by for me. As a games and movies news site, we have been constantly challenged. And although I could do with a little more sleep, it’s been a lot of fun.

In the Spider’s Web

Spider-Man was the biggest, uh, spider in the room. No Way Home turned out to be Sony Pictures’ biggest global hit of all time, successfully building on its connections with the Marvel Cinematic Universe to quickly surpass a cool billion US dollars at the box office.

We got it late in Japan, where it opened on January 7, three weeks after the US opening. And avoiding spoilers when you’re the Chief Editor on an entertainment news site is basically an impossibility.

Luckily the movie was great, and our audience was hungry for additional content around its release. We published news updates, spoiler-free and spoiler-filled reaction videos, and enough related web-slinging articles to fill a multiverse.

Personally, I enjoyed the movie a lot. In fact, since No Way Home draws from not only the current Tom Holland Spidey films but also the Tobey McGuire and Andrew Garfield series, I went back and watched all seven previous movies in preparation, and every single one of them was a joy. I wish the new movie had been a little closer in spirit to the two previous entries in the comedy-focused Tom Holland series (directed with charm and humor by Jon Watts). But as a piece of event cinema, No Way Home had me in its web.

On January 5, the day after returning to work from the winter break, we suddenly found ourselves scrambling to cover the news that Sony’s showcase at the Consumer Electronics Show in Las Vegas had included a meaty segment on their upcoming new PlayStation VR headset, including revealing the imaginative official product name: PlayStation VR 2.

More importantly, we learned that the flagship PlayStation series Horizon will be coming to PSVR2. Luckily the showcase fell on a Wednesday, just in time for our twice-weekly livestreamed news show RTN, where we were able to dissect the announcements in detail the same day.

We also enjoyed similar timing when Microsoft announced its plans to buy Activision, the publisher behind Call of Duty, one of the biggest franchises in the gaming world. This seismic 70-billion-dollar deal will change the game for Microsoft’s Xbox platform. Happily the news broke overnight on a Tuesday for us, January 18, meaning our RTN livestream script the next day pretty much wrote itself.

January hasn’t all been breaking news. As I write this, I have just returned to Tokyo from Osaka, where I visited Universal Studios Japan to check out their latest videogame-based attraction, Monster Hunter World: Iceborne XR Walk.

This full-body mixed-reality attraction throws you and up to three friends into the frozen world of Iceborne, equipped with your choice of weapon, as you explore the environment, collect items and do battle with massive monsters.

It’s hard to convey in words just how impressive this attraction is. The VR equipment strapped to your body is able to track you as you walk around full-scale environments rendered in 360 degrees. And since you can customize your own character and communicate with friends in real-time via a microphone headset, you really feel like you’re there.

While some monsters appear as adversaries to be battered and bashed, others are simply chilling out in the background, allowing you to engage on a breathtaking virtual safari in a fantasy world.

And you can even eat them! A stall outside selling gigantic Great Roast monster haunches brings Monster Hunter to your taste buds, too. (OK, I guess they’re really turkey drumsticks.)

Check out more in this video I produced for IGN Japan:

On the very same day, January 20, our team in Tokyo was covering the Taipei Game Show 2022. Taipei Game Show is one of the biggest videogame expos in Asia. Usually we would attend the show directly, but for obvious reasons we have not been able to visit Taipei for a couple of years now.

Instead, we carried a simulcast of their annual Indie Game Award livestream, in which a raft of independently developed games of extremely high quality from around the world battled it out for the Grand Prix and other categories.

This year’s winner, Kena: Bridge of Spirits, is an action-adventure game with spiritual elements created by a small team at Ember Labs in California, and it has been acclaimed all around the world. We followed the awards livestream by playing Kena and many of the other winning and nominated games, so if you’re interested to see the latest and greatest indie games, check out the video below!

Also this month, I paid a visit to the Tokyo and Osaka branches of Toy Sapiens, a small chain of stores that specialize in high-quality movie collectibles. Their Hot Toys Masterpiece line of figures are incredibly lifelike and well made (with a price tag of roughly ￥30,000 JPY ($265 USD). But the reason for my visits was the special exhibitions being held in each store.

The Tokyo branch of Toy Sapiens is currently hosting a selection of genuine costumes used in the filming of Spider-Man: No Way Home, including the iconic suits worn by Spidey and Benedict Cumberbatch’s Doctor Strange, as well as the more casual everyday-teenager duds of Peter Parker and Zendaya’s MJ. Seeing these threads up close is enough to tingle anybody’s Spidey Sense.

Meanwhile, the Osaka store is currently (until January 30, 2022) hosting a Back to the Future exhibition, with a selection of outfits worn by Marty McFly, Doc Brown and Biff Tannen in the filming of the classic 1980s movie trilogy, as well as a copy of the 1950-2000 Sports Almanac that was so central to the plot of BTTF2. And – Great Scott! – the collection even includes five near-pristine hoverboards used in the second film’s unforgettable futuristic chase scene. As a lifelong fan of the series, seeing these props up close was a real treat. If you miss the exhibition in Osaka, fear not: It will move to Toy Sapiens’ Nagoya branch next.

Poking Into the Future

And that’s just some of what’s kept me busy this month.

Did I mention there’s a new Pokémon game coming out? Pokémon Legends: Arceus is one of the year’s most anticipated titles, overhauling the series staple elements with an open-area world and more action-oriented gameplay. And as I write, its release is just a few days away. By the time you read this, we’ll know what the media and the fans think of Pokémon’s new direction.

Oh yeah, and there’s a new Star Wars series being released weekly on Disney Plus right now, The Book of Boba Fett, which means as IGN Japan’s resident Star Wars expert I’m knee deep in bantha droppings right now, and still trying to decide whether or not I’m enjoying it.

But that’s a story for a long time ago, in an editorial department far, far away. See you again next month!