'Go Green' Japan, for the Environment 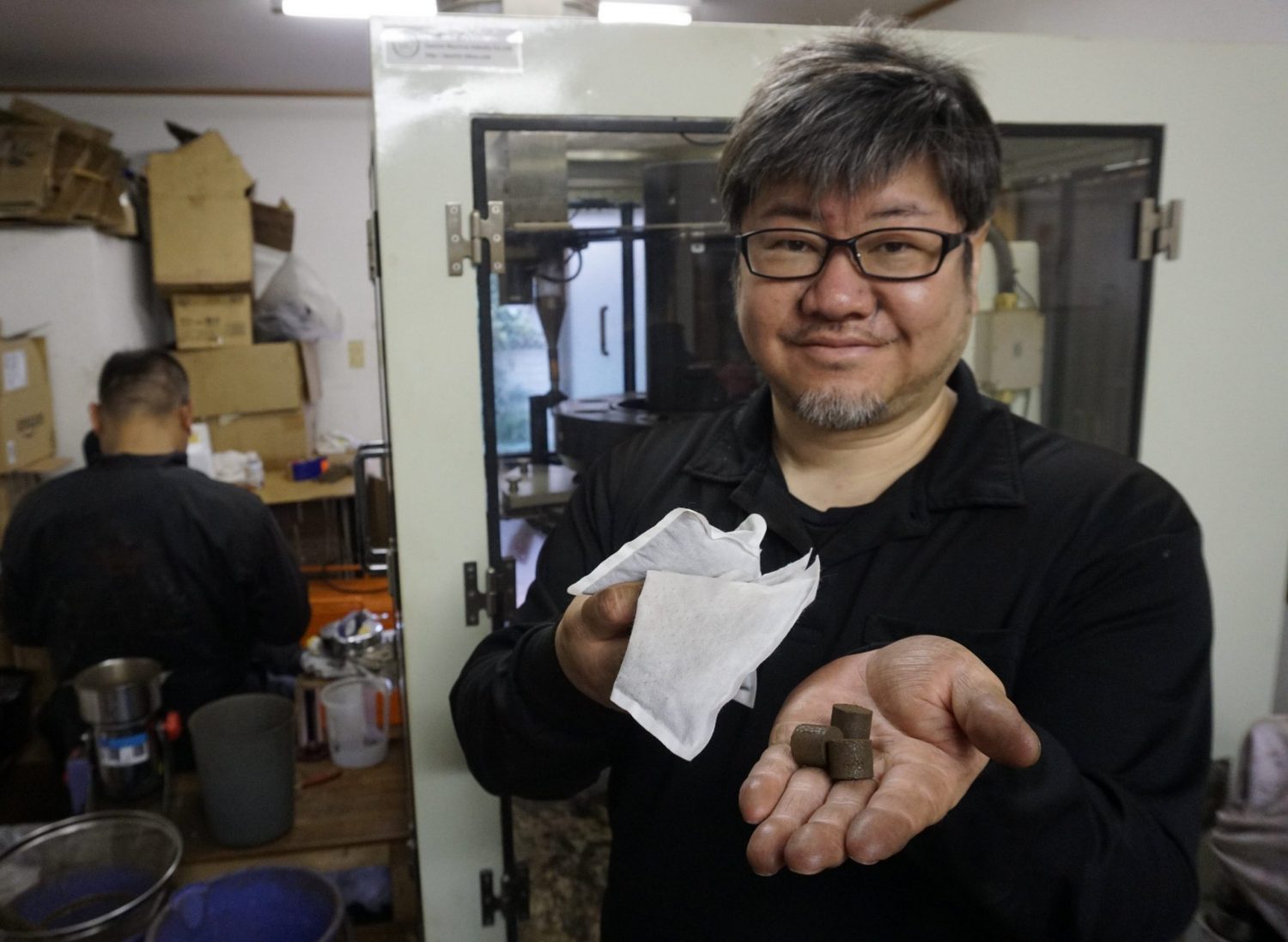 Everyone in Japan takes for granted - Kairo hand and body warmers - pulls together the support of convenience stores, schools, delivery companies—anyone who may be able to help.

In a semi-open warehouse in the countryside of Hyogo Prefecture, some 30 students and 10 adult volunteers are busy at work tearing open thousands of boxes of all sizes and repacking their contents for shipment (and separating the cardboard for recycling). While the effort sounds inefficient or redundant, it was done efficiently and with purpose.

Inside of these packages were used and new kairo, the ubiquitous hand warmers used in cold weather that now increasingly have adhesive attached to allow them to be affixed to undergarments and socks.

The kairo, all 7.3 tons worth, had been donated by people from around the country, either by mail, delivery service, or physically brought to the warehouse. While the group was finishing up that Saturday afternoon, two post office vehicles came as did a “Kuroneko” van dropping off more.

The warehouse, owned by Noriyasu Ishii, of Nishiwaki City, serves as the collection site for these donated kairo. Ishii is one of the growing number of supporters helping Takashi Yamashita, the founder of Go Green Group, an environment-focused company that is seeking to create a sustainable society through recycling, including reusing discarded kairo.

Yamashita formed his venture business in the spring of 2018. At the time, the former semi-professional boxer was in the process of developing what is now known as the Go Green Cube. When dropped in polluted water, the cube helps to clean it. The difference is clear (pun intended.)

Interestingly, each cube is made from the contents of the kairo, which are removed from the pack, and reformed. Within each kairo are brown crystals, much like ground coffee, comprised of Fe2+, another name for Ferrous Ion. When placed in water and combined with photosynthetic bacteria, the compound (reshaped into cube form) oxidizes, stabilizing the ecosystem within the water. The growth of algae slows, slime is broken up, and foul odors removed.

Yamashita became confident in the method using the cubes experimentally in a lake on a golf course in Hyogo Prefecture. He deposited approximately 200 kilograms of the cubes in the 160 square meter lake. Eventually, three-quarters of the slime disappeared.

It took several attempts for him to develop the cube format. The first version was a mass of the formed material, which looked like a large handful of dark cookie dough. The second version was sort of like a dumpling. The third iteration was a square-shaped pattern. The fourth was a ball slightly larger than the dumplings. After much experimentation—including understanding what shape broke down easiest—Yamashita and his team came up with the cubes.

Go Green Group Co., Ltd., intends to fundraise and partner with local municipalities and organizations to clean reservoirs, rivers, lakes, and bays using these cubes, which look like pet food, according to one interviewer.

The company’s motto is “Improving the environment for a sustainable society.” Yamashita saw the need to contribute to society by improving the environment, after having taken over the ownership of a convenience store from his father. He was deeply bothered by the plastics and other waste generated by these and other types of stores, and about consumer behavior in modern society in general. He even thought there would be some sort of divine punishment if he did not do something for the environment.

One day, a Chinese employee at the store bought a lot of kairo and he asked her why she was buying so many. She explained that she was taking them to her mother in China, which did not have them. That was news to Yamashita, as he took it for granted that other countries would have kairo too. He was touched by her concern about her mother. Afterwards, he began looking into kairo and learned that its contents can help clean water.

Yamashita was influenced in this by the successful experiments of Professor Tsuyoshi Sasaki of Tokyo University of Marine Science and Technology, whom he learned about on the Internet. He traveled to Tokyo to meet him and decided to partner with him to bring the theory to life.

He was also able to gather support from other businessmen and those who believe in his mission. He rented a part of a factory in Higashi Osaka to help manufacture the cubes with the contents of the donated kairo. These cubes are then sold to the aforementioned groups and municipalities.

Their efforts are directly related to the United Nations’ Sustainable Development Goals, namely Nos. 14 (Life below Water), 15 (Life on Land), and 17 (Partnerships for the Goals). Yamashita is particularly busy now building the partnerships, including with convenience stores, schools, delivery companies—anyone who may be able to help.

Currently, those who send used (or unused) kairo to the Go Green Group collection site at Mr. Ishii’s warehouse must pay out of pocket for the mailing. Most do so gladly, and often include a note or letter of gratitude or encouragement. One person even included a brand new ￥10,000-yen bill (about $90 USD).

Yamashita is trying to make the donation process simpler for participants, partnering with stores and schools as donation sites, trucking companies and delivery services to pick them up and deliver on their rounds, etc.

People can participate in his movement in a number of ways. Raising consciousness in one’s workplace or school and setting up a box to collect kairo, donating these kairo (sending to the collection site by mail or delivery service), volunteering at the collection site, and donating money and/or becoming a monthly sponsor are just some of the ways. According to the website to become a monthly sponsor for just ￥880 yen (about $8 USD) per month, 61 bathtubs worth of water can be cleaned.

Yamashita has ambitious goals. He is hoping to clean Osaka Bay by 2025, when the Osaka Expo is scheduled to be held. To do so, everyone’s help is needed.

I learned of Yamashita in January this year when his efforts were introduced in the news nationwide. Wanting to assist him in some way, I spoke to a friend involved in the water field about wanting to invite Yamashita to give a talk at a morning study group I host in the Kansai area. He told me he was friends with him and called him in my presence, setting up an appointment for the three of us to meet.

We met shortly thereafter, and two months later, Yamashita spoke at the morning gathering. Some of us then joined him on April 24 at the warehouse to volunteer our time and labor.

As mentioned earlier, we were not the only ones there. Many young people from surrounding schools came. I asked them what volunteering meant for them. Many were happy to be able to help the environment, understanding how the cubes were being used. Others expressed their happiness that kairo, usually just thrown away, were being recycled and put to good use.

I also asked what part of the work was most fun. Several of them spoke about the feeling of satisfaction that they were able to go through the huge number of boxes, watching the pile get smaller and smaller before their very eyes.

More recently, the same students and this writer, along with Yamashita and his other supporters, as well as several new volunteers, gathered again in Nishiwaki to tackle new piles of boxes that had arrived in the interim. New, more efficient procedures were in place and the work went even faster this time.

We are all involved to differing extents in damaging the environment. We should therefore all be involved in helping to repair it.

The next gathering is expected to be in the early Fall. I hope to see you there.

Learn more about the Go Green Group on their website, at this link.

Find other reports and essays by Dr. Eldridge on JAPAN Forward at this link.