GOALBALL | Fueled by a Strong Start in the First Half, Japan Women's Team Earns Bronze Medal 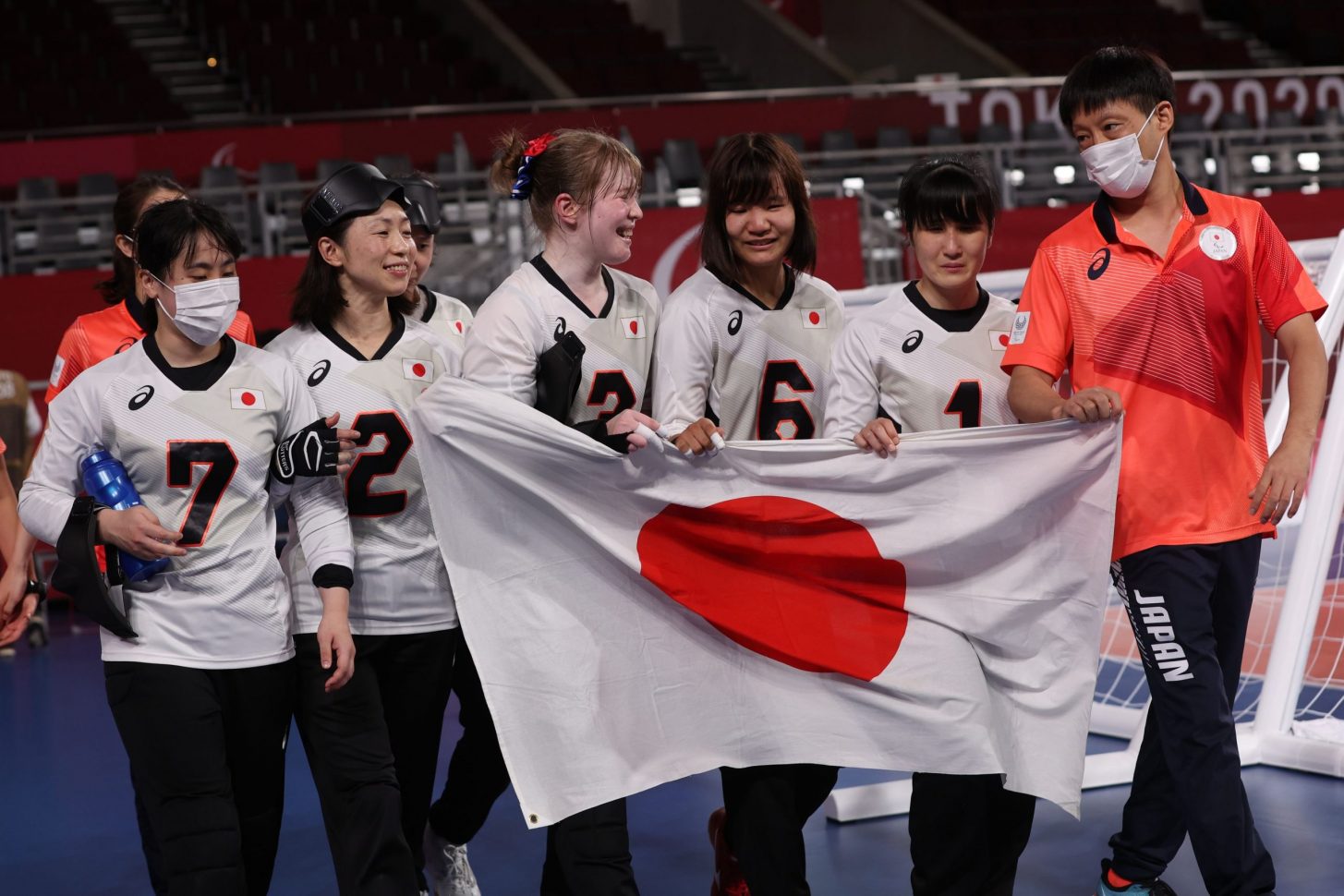 The Japan women's goalball team celebrates after defeating Brazil in the bronze-medal match on September 3 at Makuhari Messe in Chiba. (Bernadett Szabo/REUTERS)

The expression hand-eye coordination is often used in sports to describe an athlete’s natural skills, or those honed by countless hours of practice.

Meanwhile, throughout the Tokyo Paralympics, hand-ear coordination has been brought to people’s attention with greater frequency than normal.

For athletes with visual impairments, the importance of hearing to conduct activities is perhaps best exhibited in goalball, a sport developed for injured soldiers from World War II. In goalball, hearing opposing players’ moments and the hard rubber ball’s bells are necessary elements of competition.

What’s more, goalball players wear eyeshades with gauze eye patches underneath, and the enforced covering acts to even the playing field. (And silence, from those on the sideline or in the stands, is enforced when the game is on.)

Scoring goals, of course, is the No. 1 objective, and the Japan women’s goalball team scored five goals in the first half of its bronze-medal match against Brazil at Makuhari Messe in Chiba on Friday, September 3.

Japan, guided by coach Kyoichi Ichikawa, held on for a 6-1 victory and finished the Paralympic tournament with a solid record of four wins, two losses and one tie. Turkey beat Japan twice (7-1 on August 25 and 8-5 on Thursday, September 2 in the semifinals), then defeated the United States 9-2 in the women’s final to claim its second consecutive Paralympic gold.

Against Brazil, Eiko Kakehata scored a hat trick, setting the tone for Japan with a pair of quick goals in the opening half. She rolled the ball into the net with 10:04 remaining in the half. And then with 8:49 left in the opening half, the 28-year-old Yokohama native, who is classified as B2 (the middle of three visual impairment categories), put a crafty spin on the ball and bounced it through the Brazil net to make it 2-0.

Norika Hagiwara extended the lead to 3-0 on a penalty shot goal at the 8:42 mark after Brazil was assessed a penalty for a shot violation (long ball).

Another Hagiwara penalty shot goal, this one at the 2:58 mark, gave Japan a 4-0 lead.

“Japan can win if we go at our own pace,” Kakehata commented later, according to The Yomiuri Shimbun.

There were high expectations for the host nation entering the Tokyo Paralympics. Japan captured the gold at the 2012 London Paralympics and lost in the quarterfinals four years later at the Rio Games.

On the 18-meter long by 9-meter wide goalball court, only three players per team are on the court, and Japan’s six players, starters and substitutes, effectively performed in all combinations. Hagiwara, Kakehata and Rieko Takahashi received the most playing time.

In Friday’s third-place match (and all others), players congregated near their goal, which covers the full length of the baseline, on defense and waited for their opponent’s shots. The goal is 1.3 meters high.

Teams alternate, taking one shot apiece throughout a 24-minute contest, which is divided up into two 12-minute halves.

The ball must be thrown back to the other team 10 seconds after it is obtained, providing a swift pace to the action. A variety of delivery techniques is used for throwers, as evidenced in the Japan-Brazil showdown. For instance, Brazilian players frequently released the ball with their backs to the defense and forcefully hurled it in their direction through their legs, using a technique that somewhat resembled an American football center snapping the ball for a punt.

Kakehata, on the other hand, utilized nifty footwork and 360 degrees on some of her throws. She was born with congenital albinism, and pitching is in her genes. Her father, Mitsunori Kakehata, was a pitcher for Nippon Professional Baseball’s Taiyo Whales (1984-92) for the majority of his pro career. He has encouraged her to succeed in goalball.

“I want her to believe her pitch is a weapon and fight using it,” Mitsunori Kakehata, now an NPB scout, was quoted as saying by The Yomiuri Shimbun. “I also want to see Eiko smile from the bottom of her heart after games.

On defense, the contributions of Hagiwara, Kakehata and Takahashi were stellar. Their individual positioning and quick reactionary movements to plug in holes as the ball approached the net were trademarks of their play.

Collectively, they dove away from and toward one another, or sprawled on the court using their entire bodies to make defensive walls again and again. In other words, they acted in unison and the collective efforts produced consistent, positive results.

The frequency of these actions occurred, well, every minute.

Brazil had 92 throws, with Japan hurling it 94 times.

Teammate Rie Urata, who made her Paralympic debut in 2008, also acknowledged that Japan has made strides on defense during the Tokyo Games

“The first game against Turkey we made a lot of mistakes, but we have improved since, and our defense is very important and we also need to take our chances,” Urata said, according to an article posted on the International Blind Sports Federation website.

When the action switched to offense for Japan, Hagiwara was the most frequent thrower. She attempted 53 throws, including a pair of first-half goals.

Relying on her father’s advice and pride in her craft, Kakehata made 35 throws, keeping the Brazilians off guard with a mix of angles and speeds on her throws.

The 44-year-old Urata is already thinking about the 2024 Paris Paralympics.

“France? I want to go,” she remarked, indicating to reporters her thoughts on her Paralympic future.