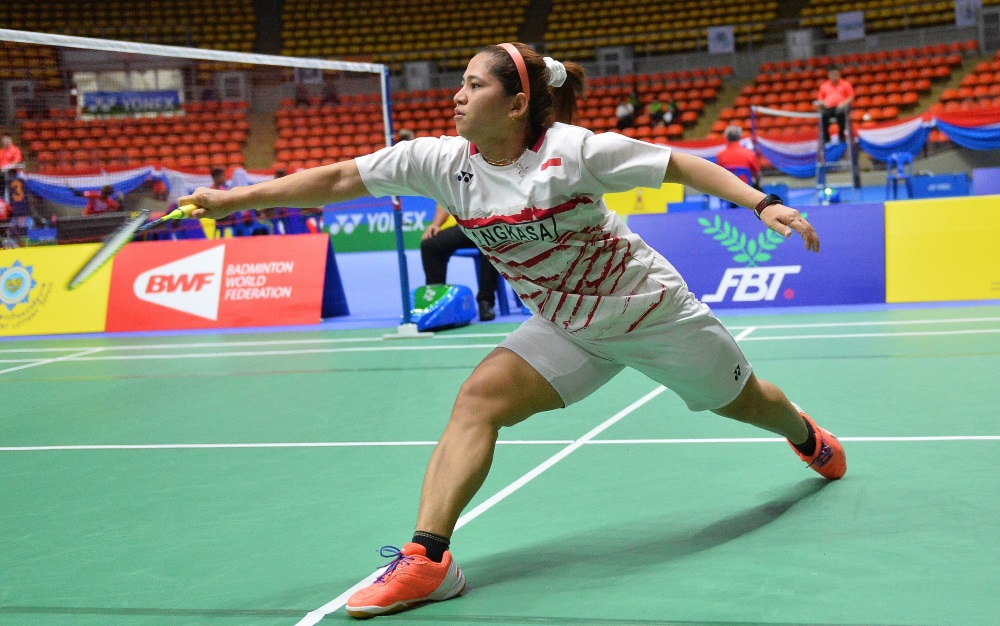 Leani Ratri Oktila, a three-time world champion and two-time champion in the Asian Para Games, is aiming to be the best in the newly introduced sport of badminton at the Tokyo Paralympics.

And she is aiming for a medal in all three categories present at the Games: singles, women’s doubles and mixed doubles.

In the matches during the day on Friday, September 3 at Yoyogi National Stadium, it certainly looks like she is on the right track.

In all six matches in which she participated, Indonesia won 2-0. In particular, in the women’s singles SL4 group A match against compatriot Sadiyah Khalimatus, Oktila prevailed with a strong performance, 21-14, 21-10.

The 30-year-old, however, has tried to keep a level head, and after her first match commented to Olympics.com:

“This is the first time [the sport has been included in] the Paralympics so I already feel good for the Games,” she said after her opening win over Japan. “I really want to get the gold, but I will try to not be too ambitious about it.”

She concluded: “I will follow one game to another game, and go for it.”

Oktila started training at the age of 7 and used to be an able-bodied badminton athlete before a motorcycle accident in 2011, which caused damage to her left leg, now seven centimeters shorter than the other.

The Indonesian athlete was encouraged by her family to continue competing, and after seeing badminton para athletes, she became convinced that “there were people struggling harder, so I thought I can play again and fight harder,” according to an interview in 2018 with grid.id.

Keiko Sugiura triumphed in the cycling women’s C1-3 road race and sped toward gold, in the category dedicated to athletes with upper and/or lower limb disabilities.

At Fuji International Speedway, she completed the race in 1 hour, 12 minutes and 55 seconds, 16 seconds ahead of silver medalist, Sweden’s Anna Beck. Australia’s Paige Greco came third, with a time identical to Beck.

Funnily enough, on August 31, Sugiura, Beck and Greco (in that order) took the podium in the time trial category. On that day, the Japanese athlete in complete disbelief commented to Kyodo News:  “I’m really pleased that I didn’t quit.”

As it happens, Sugiura had contemplated quitting when she turned 50 to move to a different chapter in her life. However, she was persuaded to stay in the sport, thanks to her coach who told her that the difference between being 49 and 50 was “a margin of error.”

On that historic occasion, she also became Japan’s oldest medalist at the age of 50, and the first female cyclist to win a gold in the Paralympics.

Prior to winning, Sugiura had charmed audiences at home before the race by saying with resolve: “I can’t claim the ‘youngest athlete’ title anymore, but I certainly can try for the ‘oldest athlete!’ ”

The Shizuoka native started her path as a Paralympian following an accident in a triathlon in 2016, which caused paralysis on her right side.

With her second stellar win, Sugiura commented to NHK that she wants her victory to inspire others to challenge themselves: “I want to be living proof that, no matter what disability or how old you are, there is always room to grow, to improve.”

Rivals and Friends Kimura and Tomita Win Gold and Silver

Keiichi Kimura and Uchu Tomita raced to gold and silver in the men’s 100-meter butterfly, finishing with times of 1 minute, 2.57 seconds and 1:03.59, respectively, in the S11 category dedicated to those with visual impairment. Brazil’s Wendell Belarmino Pereira placed third in 1:05.20.

It was one of the best examples of how the strongest rivals can also be the closest friends.

In fact, Kimura and Tomita outside the pool are close friends, constantly supporting yet pushing each other to do better.

They had both competed in other categories in the Paralympics in Tokyo, with Tomita collecting a silver medal in the 400 freestyle, and Kimura nabbing a silver in the 100 breaststroke.

However, the two athletes had not yet achieved their aim of achieving a gold medal, and in the same category. In particular, in NHK interviews, Tomita had wished for his friend to win the gold medal in the Paralympics.

As the two friends finished their race in adjacent lanes in the pool and came to realize the medal results in the butterfly, they collapsed in an overjoyed hug, where it was hard to tell if they were crying or laughing, or both.

Kimura was visibly choking back tears during the medal ceremony, as he later told NHK: “This is the day I have been working hard for, and I knew it would come. A lot has happened this year, but I am so happy I was able to finally reach this day.”

Winning is about one single point at the time.

And this is definitely the case with Rwanda's team, which secured a win against the host country 3-0 for the classification of 7th and 8th position at the Tokyo Paralympics.

The team, after losing in matches against the United States, the Russian Paralympic Committee and China, greeted the win over Japan with athletes jumping up and down with joy following the win.

And for good reason. Although it wasn’t a medal result, it was Rwanda’s first-ever victory in a match in the Paralympics.

In fact, the team is only in its second Paralympics. It is the first Sub-Saharan women’s team in history in the sport to compete at the Paralympics.

Speaking to Olympics.com, the team said it is already preparing for the next Games, as coach Jean Marie Nsengiyumva said: “We will start now to prepare for Paris 2024, we won’t wait.”

Diede de Groot stayed poised in an intense duel with Yui Kamiji in the women’s singles final at Ariake Tennis Park. She also accomplished her goal of winning the gold medal, defeating the second-seeded Japanese star 6-3, 7-6 (7-1).

The second set was a test of endurance. After top-seeded de Groot wrapped up the first set in a tidy 32 minutes, the second set took 73 minutes as both players battled to grab momentum in the back-and-forth duel.

De Groot excelled when utilizing her strong backhand. She finished with a 24-6 advantage over Kamiji in backhand winners.

In the 2016 Rio Games, de Groot was fourth in women’s singles and Kamiji placed third.

Balanced scoring carried the Japan men’s wheelchair team to a 79-68 victory over Great Britain in the semifinals at Ariake Arena.

The United States trounced Spain 66-52 in the earlier semifinal match.

The Japan-U.S. title match is set for Sunday, September 5. It will be the Japan men’s team’s first appearance in a Paralympic wheelchair basketball final, and a marked improvement over five years ago, when it finished 10th overall at the Rio Games.

Great Britain was held to 31 of 67 overall. Gaz Choudhry, who lost his right leg due to bone cancer at age 10, led the club with 26 points and 11 assists.

Despite trailing 23-15 after the opening quarter, Japan cut the deficit to 36-33 by halftime.

By the end of the third quarter, Japan led 52-48 and extended its advantage in the final stanza.

Lisa Gjessing, a winner of four world titles, has added a Paralympic gold to her impressive CV.

The 43-year-old Danish athlete outshined Beth Munro of Great Britain in the women’s K44 58-kg division final at Makuhari Messe in the inaugural taekwondo tournament at the Paralympics, winning 32-14.

Gjessing seized control early on and led 12-4 after the first period. She outscored Munro 9-4 in the second period and 11-6 in the third.